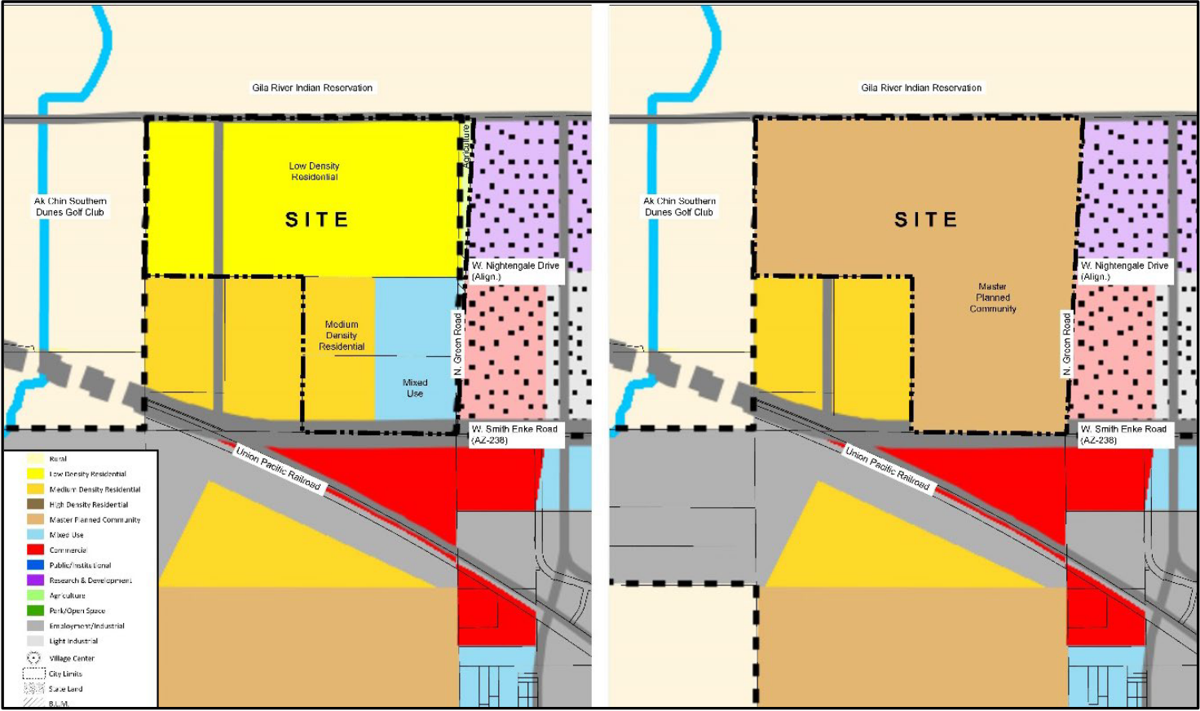 A side-by-side comparison of the 493-acre site located on State Route 238 with the current zoning on the left and the proposed zoning on the right. 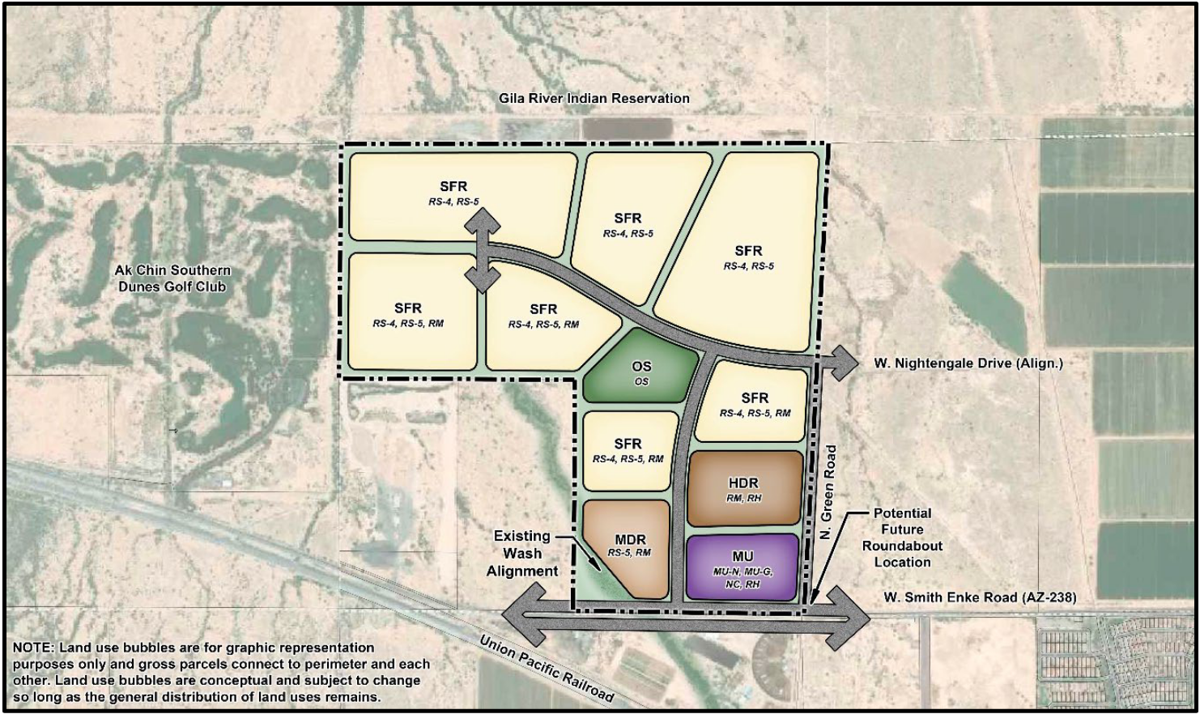 A rendering of what the 493-acre property currently housing Anglin Dairy could look like in the future.

A side-by-side comparison of the 493-acre site located on State Route 238 with the current zoning on the left and the proposed zoning on the right.

A rendering of what the 493-acre property currently housing Anglin Dairy could look like in the future.

MARICOPA — Anglin Dairy, located on State Route 238 and Green Road, is in talks with the city and Planning and Zoning Commission to rezone their land for possible housing in the future.

The Maricopa Planning and Zoning Commission heard from RVi Planning + Landscape Architecture on behalf of Anglin Dairy on more of the site details at a Sept. 14 meeting, gearing up for the rezoning to be brought before City Council Oct. 20.

The property is a 493.71-acre, L-shaped stretch of land north of SR 238 and currently functions as an active dairy and farming operation. To the north, the land borders Gila River Indian Community vacant land. To the west is Ak-Chin Southern Dunes Golf Course and to the south and east is mainly vacant land with some agriculture.

The recommended rezoning was for discussion only at the meeting, including a public hearing portion. The commission heard a proposition to change the existing combination of low-density residential, medium-density residential and mixed-use land to a master-planned community.

According to Ryan Wozniak, senior planner for the city, a master-planned community would include a mix of smaller and larger plots of land.

“Residential areas, adequate open space, schools, churches, neighborhood facilities (come) under a Master Planned Community envelope, which is supposed to be more thought out, more balanced, better transitions, no arbitrary lines as to where one designation goes versus the other designation — so a potential win there,” Wozniak said.

This change in zoning was a request of the applicant, Richard Anglin, owner of Anglin Dairy, DA Holdings LLC.

“The applicant came to us looking for justification as to why that amount of mixed-use, ‘Maybe a master-plan community?’” Wozniak said. “Giving us more of a variety of mixing of uses on the site rather than these hard lines would make sense.”

The application comes as the city’s continued growth threatens to encroach on the farming area. One of the city planner’s goals to minimize these conflicts in land use is by implementing the overarching master-planning community.

Commissioner Ted Yocum agreed with the applicants, saying, “The use of this site as a dairy right now is becoming non-compatible considering the direction we seem to be going in that particular area.”

He also made his goal to diversify housing clear, citing an overwhelming majority of single-family homes already in Maricopa and the need for more variation in housing.

He compared Maricopa’s 99% single-family homes to Phoenix’s average of 64%, and stated over the next 10 years, around 22,000 new buyers and renters will not be in the market for a single-family home, opting instead for alternative types of housing currently underrepresented in Maricopa.

“We are certainly highly overstocked, percentage wise, in single-family detached homes versus the number of multi-family homes that — from a buyer’s perspective and a renters perspective — are (needed) to meet that demand,” Wozniak said.

“My concern is that we’re getting kind of monolithic — not so much anymore with the apartments coming in,” Frank said. “Almost everything we’re getting is medium-density product, it just would be nice to get some more diversity the other way, a little bit of a larger lot kind of product.”

Frank also called the commission’s attention to the Vekol Wash, which will impact the area and need addressing should the rezoning be approved by the council.

Wozniak also stated during his presentation they are currently conducting a traffic study that would show the impacts of traffic at the entrance to the property. Supporting documents confirm this and mention a roundabout could be a solution.

“The City and ADOT support a possible roundabout at the intersection of Smith Enke Road (SR 238) and Green Road that would be able to accommodate truck and trailer traffic,” the document states.

An overpass might also be suitable for the area, and site planners are also considering a fourth leg to head south on Green Road.