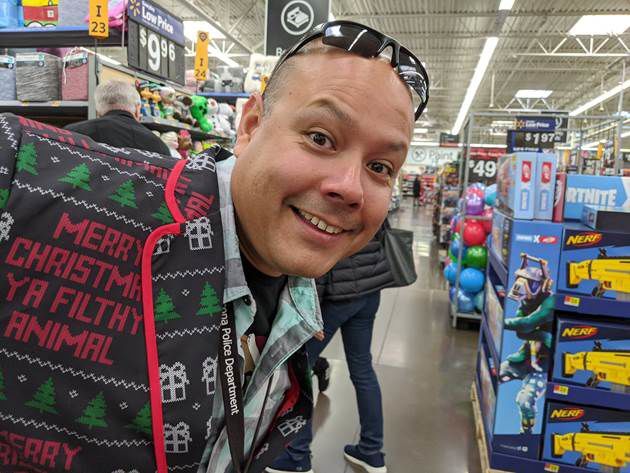 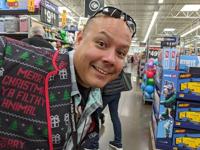 Ricardo “Ricky” Alvarado smiles during a Shop with a Cop event. 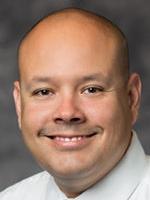 MARICOPA — Serving the city he grew up in was always a dream of Ricardo Alvarado, 43. Born and raised in Maricopa, he knew the dirt roads and farm fields well from his adolescent years in the desert city.

He began his career in other areas of Pinal County, working as an officer for Eloy, Gila River and Arizona Department of Public Safety before he had the opportunity to work in Maricopa. In 2007, Alvarado was hired as one of the first 10 police officers for the Maricopa Police Department.

“The most rewarding (part) was, I got to work where I grew up,” Alvarado said. “My childhood home is still in Maricopa. My family has been in Maricopa for over 50 years.”

Alvarado graduated Maricopa High School as one of 12 students in his class, and he said it was fulfilling to return to his city as a public servant. During his time as an officer, he wore many hats including detective, undercover agent, traffic cop and tech liaison.

Along with all that came plenty of danger.

“I got into an accident in 2010 when I was a motorcycle cop,” Alvarado said. “I had like seven surgeries from that accident. … I would end up getting into a fight or something like that on duty. I would always end up tearing basically what he (the doctor) fixed. Finally he said, ‘I can’t fix it anymore.’”

Alvarado’s shoulder was damaged and he was medically retired from the force. Four months later, though, Alvarado beat out other candidates for the public affairs specialist role and was back with the department.

Alvarado would then spend another eight years being the direct liaison for the department with both media and the public. Over time, he took on additional duties such as monitoring the sex offender registry, presiding over the fingerprint ID unit and overseeing the drone program for the department. On the weekends, Alvarado also worked at Sky Harbor International Airport as a Federal Aviation Administration contractor.

His time with the department came to an end in September, when he resigned, citing recent changes the city is making to his and other public information officer roles. In his letter of resignation, Alvarado expressed his gratitude for the opportunities provided and his frustration over the changes.

“As an original member of the Maricopa Police Department team, I appreciate the opportunities I have been provided in past positions as Police Officer and Police Public Affairs Specialist,” Alvarado wrote in his resignation letter. “The recent changes to my role, responsibilities and salary are the cause for my resignation. I feel that my loyalty to the city and police department for the past 13 years is no longer valued.”

Recently, the city has moved forward with “staffing efficiencies,” making a number of changes to how the city and the public safety departments exchange and divulge information — namely, adding on city staff members to replace roles previously outsourced.

“On a staffing note, we did something internally this year that would help better use our precious resources by once again looking for efficiencies,” Mayor Christian Price said during his State of the City address in October.

While this statement was partially in reference to the hiring of a city staff member with fire marshal training to speed up inspections and, in turn, development projects, Price later added in an interview that it was also in reference to changes to the role of PIOs within the city.

“It’s only part of the reason,” Price said. “We go through internal ramifications by which we have to make sure that all of our folks are within their specs and guidelines and job descriptions and things like that. Sometimes, over the years, people start doing things outside of their job descriptions.”

For now, city Communications Coordinator Luis Vila is managing all communications with media and the public for MPD. In the future, Price said the city would like to create a role for a designated public safety PIO, combining the liaison roles of police and fire.

“Wouldn’t it be more efficient for taxpayers, if we had one PIO or two PIOs meaning you have one for the city and all the communications that go out there, as well as one for public safety?” Price said. “We’re trying to centralize communications, so that our messages (are) a lot more clear, a lot more universal. … To get the message more direct and being right all the time, so that the citizens can count on one message rather than multiple messages.”

The city is moving away from allowing the police and fire departments to divulge information to the public directly, and is instead implementing new city public information officers to better mitigate what information is released to media entities and the public.

While Alvarado was offered the opportunity to move over to City Hall, his role would come with a pay slash and a six-month probationary period, the second of which is city policy.

“I had gotten reassigned or promoted,” Alvarado said. “As the resignation (states), it was the fact that I was going to have a pay cut, and I was going to be put on probation.”

Alvarado stated he was not offered the opportunity to remain in his current position.

The roles of his job would also significantly change from what he was working on previously, and instead of reporting to Chief Steve Stahl, he would report to the city management for police press releases.

In regards to his departure, Price said if the city notices one “side” is more heavily staffed than the other, it will make changes.

“We need more people over here, well, this person may not do that job. We have to figure out, is there a place for them in the organization? Reorganizations happen all the time,” Price said. “When the job description or role changed, he (Alvarado) didn’t care for it and so he resigned. And again, that’s totally his right to do so.”

Since his departure, Alvarado has spent time vacationing and relaxing with his family. He has also made a smooth transition to working full-time in his FAA contractor role, with nearly a decade of experience with the airport already under his belt.