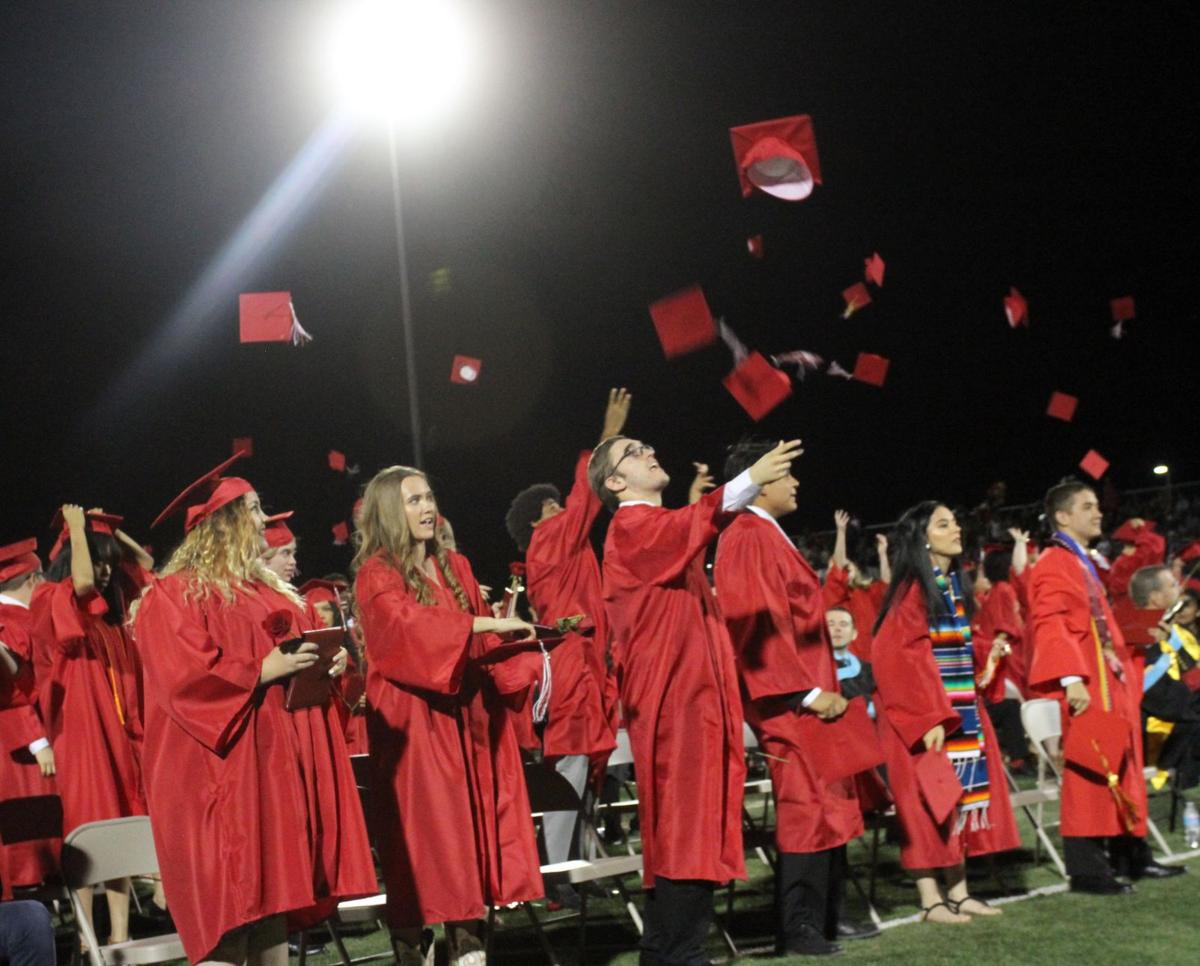 Maricopa High School graduates throw their caps in the air after they are given official word that the next chapter in their lives is about to begin. Below, they walk off the field as graduates. 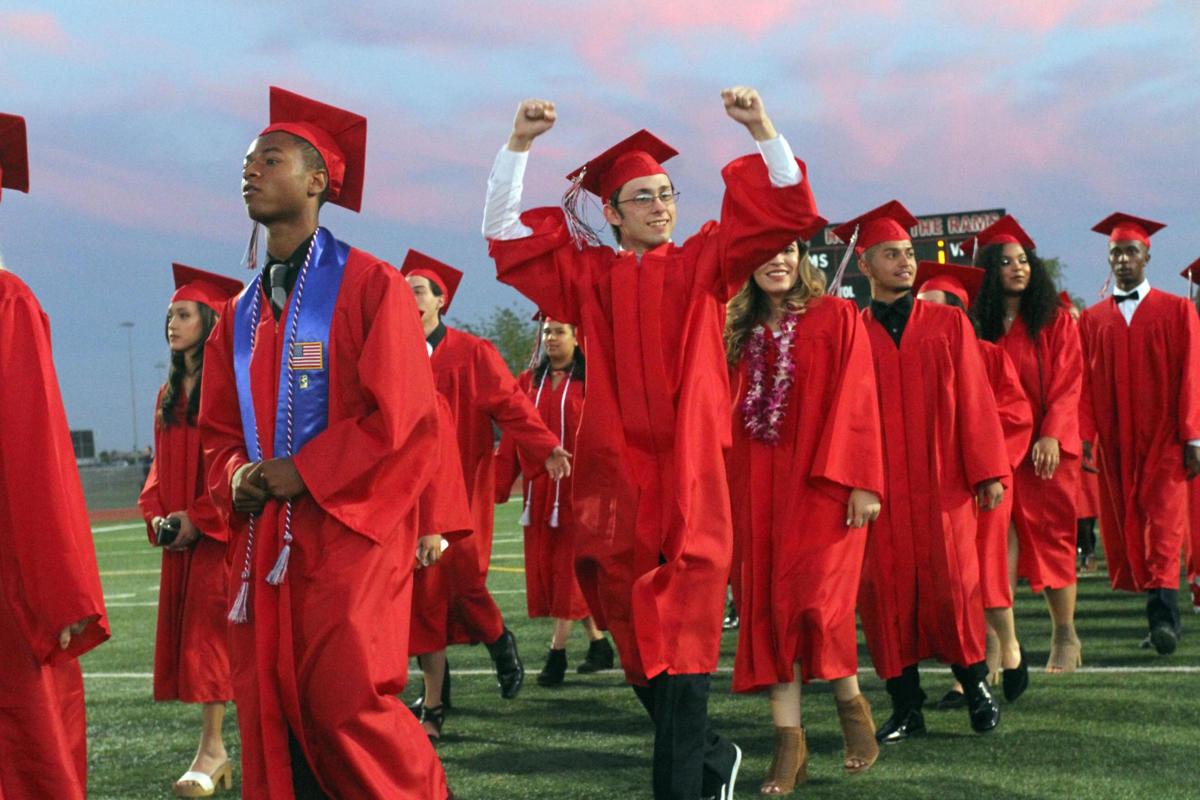 Soon-to-be Maricopa High School graduates march onto the football field for their ceremony. 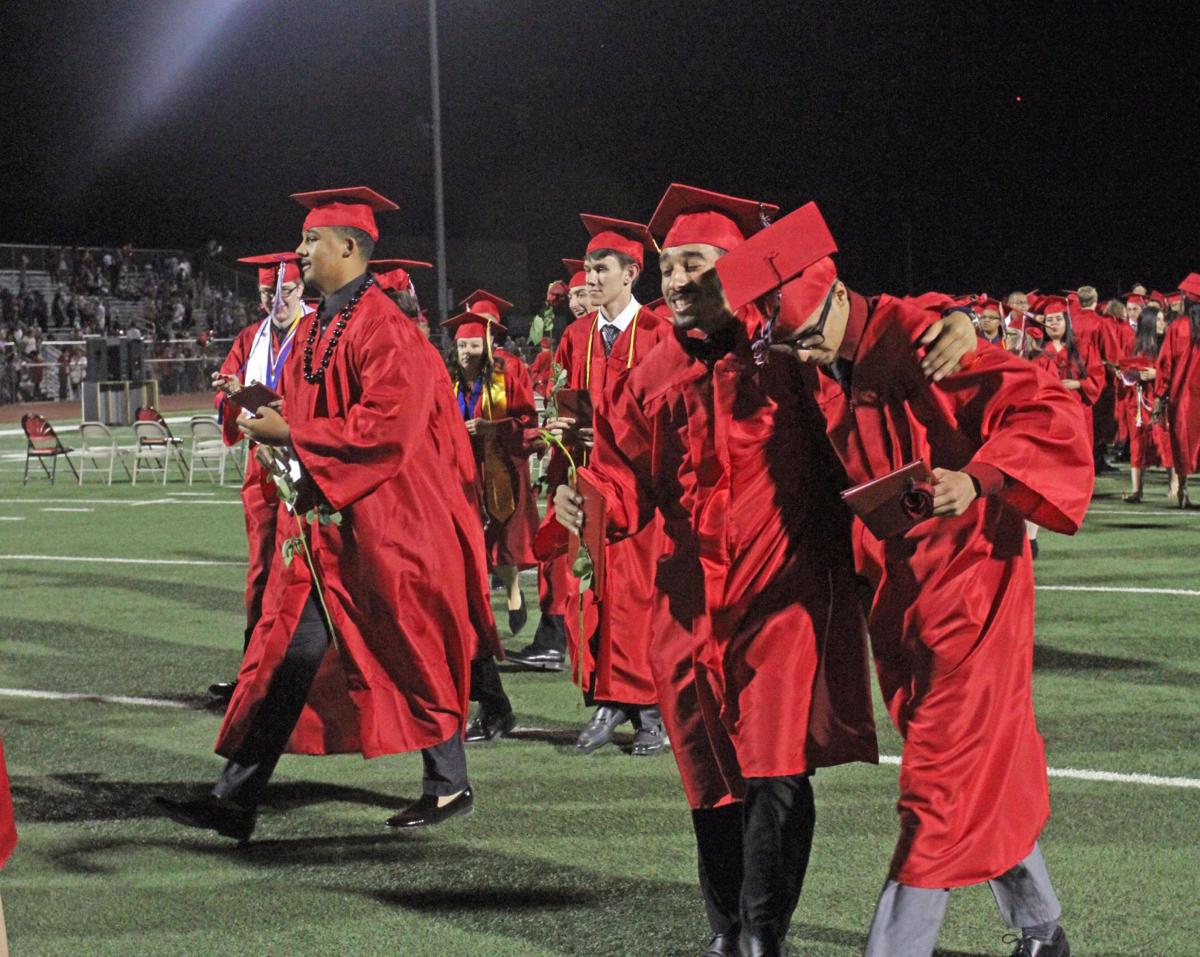 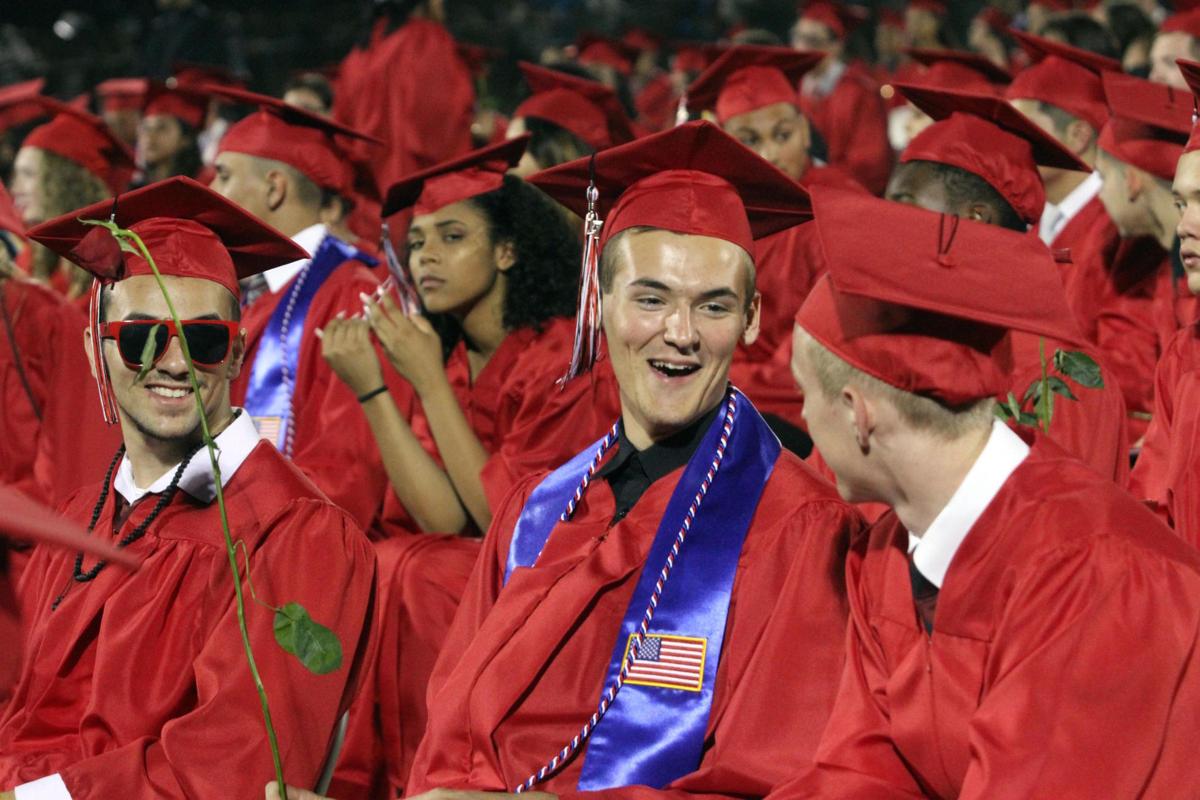 Graduates, above and below, enjoy their final moments together at Maricopa High School. 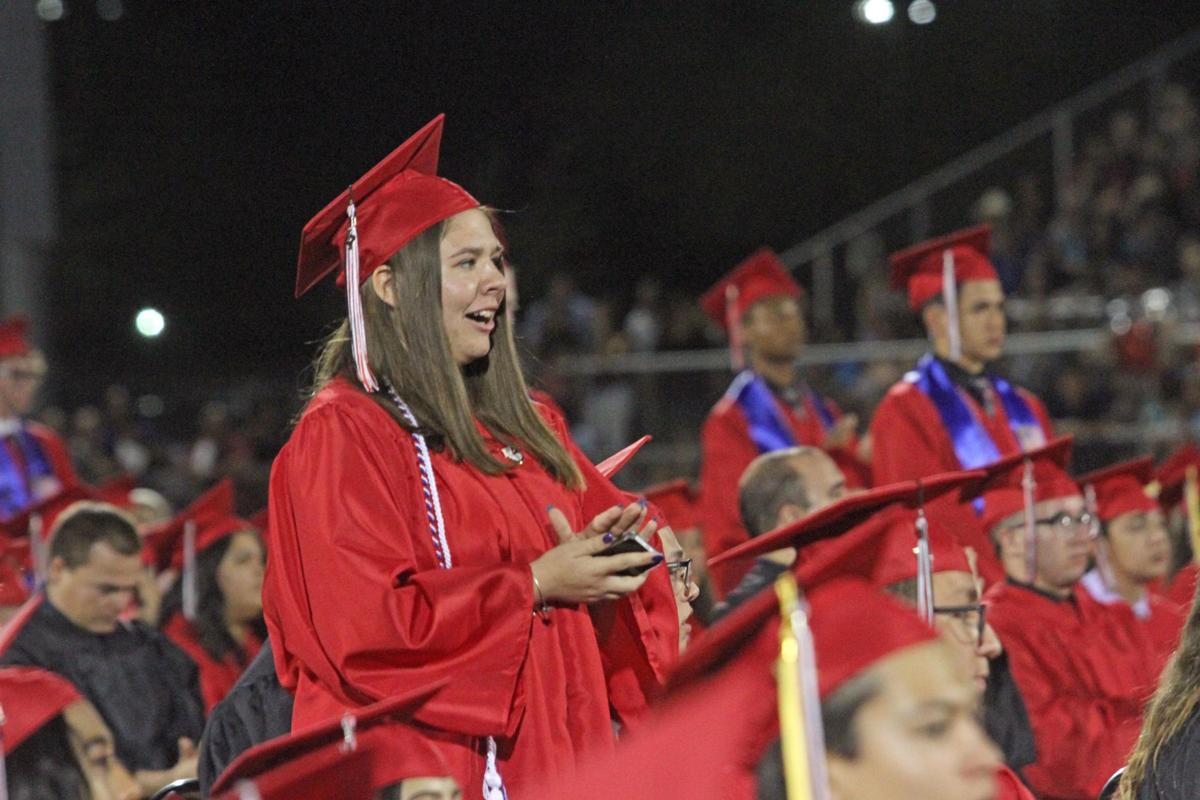 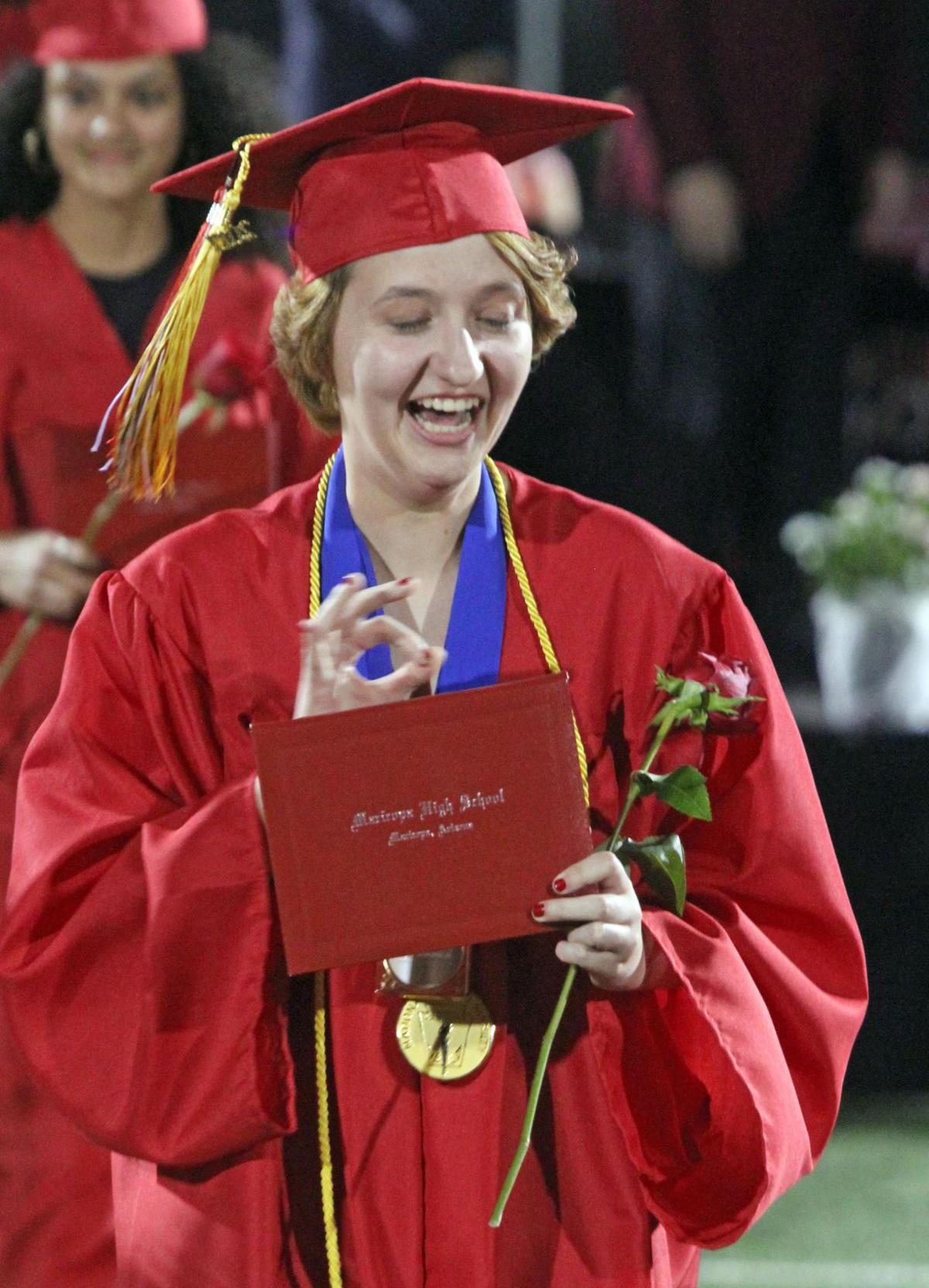 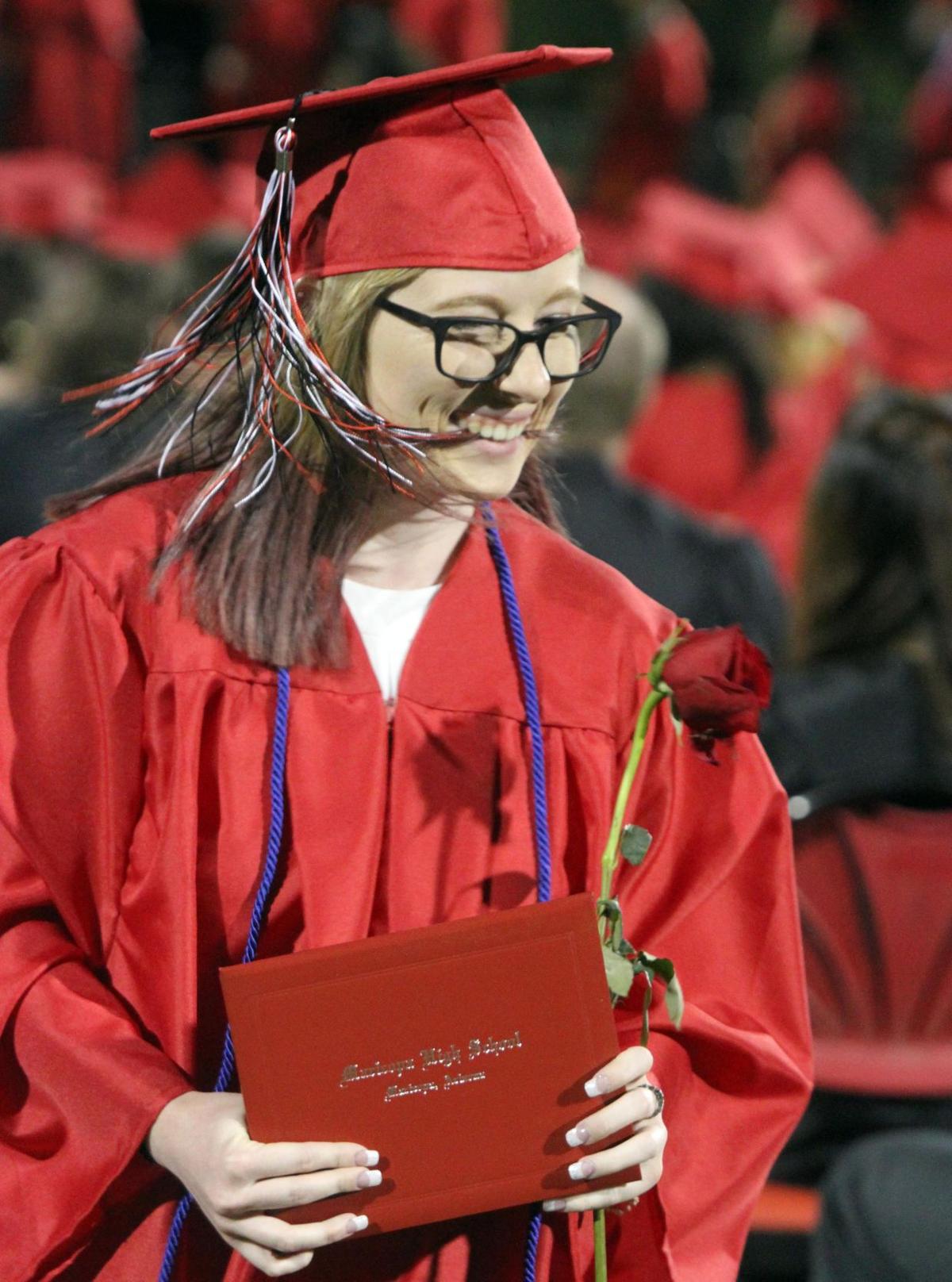 Maricopa High School graduates throw their caps in the air after they are given official word that the next chapter in their lives is about to begin. Below, they walk off the field as graduates.

Soon-to-be Maricopa High School graduates march onto the football field for their ceremony.

Graduates, above and below, enjoy their final moments together at Maricopa High School.

MARICOPA — It’s an evening that takes place every year, but for every high school class it’s a once in a life time occasion. On Thursday, the Class of 2017 graduated from Maricopa High School.

Proud parents and family members eagerly sandwiched together on the football field bleachers, waiting for the ceremony to begin. Parents, grandparents and even siblings wore smiles of pure elation as many embraced the realization that high school is finally over.

Inside the high school gym, the room buzzed with excitement as students took pictures, hugged, and spoke with their friends for what — in many case — will be the last time.

“I’m never going to meet the same people in a setting like this ever again,” said Neal McNelly. McNelly is one of eight students who decided to join the Marine Corps after high school, a decision that he says was based on his desire to be the “best of the best.” His fellow classmates echoed that sentiment.

Jacob Sorenson, who shares the same birthday as the Marine Corps, Nov. 10, said he wanted to join as a way to give back to his community and his country. Like many of his friends, Sorenson is a Poolee, meaning that he will go off to bootcamp after graduation.

During his time in high school, Sorenson took an active role in training. For three years he was a member of ROTC, and served as Web Master, Inspector General, and Flight Commander.

“I always wanted to serve my country,” he said.

Yet, for some students a career in the Marines is just the beginning. That’s especially the case for Juan Carrillo, who was the high school’s first state officer for DECA, a program that he says made him the person he is today. DECA is an international organization that prepares adolescences and young adults for potential careers in business. The program teaches students entrepreneurial skills like marketing, finance, and customer service, which Carrillo sees as preparing students for the “real world.”

After serving in the Marines, he hopes to go on to get his degree in Business Management, with the intention of returning to Maricopa and getting a job with the city. Another dream of Carrillo’s: eventually owning his own Dutch Bros. Coffee house.

Given the multitude of honor cords slung around his neck, which his friends happily tease him about, those dreams may just very well turn into realities. A member of the National Honor Society, Carrillo graduated with a 3.8 GPA.

During the ceremony, the subject of big dreams and plans after high school came center stage as the first speaker, Ak-Chin Chairman Robert Miguel, addressed the graduates.

“Although my life didn’t turn out the way I thought it would be, I don’t regret it one bit,” he said. “I haven’t failed, I adapted and found a way to make myself happy in a way that fulfills me, and so will you. Life doesn’t usually follow the plans you lay out for yourself. You will all experience the highs and lows of life.”

Other students will be going on to study the career path of their choice. That includes 18-year-old Asia Beavers, who will attend ASU in the fall. She plans to study at the W.P. Carey School of Business.

The school’s co-valedictorians, Alfred Abraham and John Blodgett, both presented speeches at the ceremony. Rachel Blakely, the salutatorian, also spoke at the event.

The night wasn’t completely free of hiccups, however. Long time counselor and soon-to-be retiree, Larry Veltrie, accidentally referred to the graduating seniors as the Class of 2016 — a mistake that was met with some disapproval and laughter from the graduating class.

As they walked across the stage, graduating seniors were presented with a red rose, which they were encouraged to give to the person they felt deserved the most credit for their success in high school. For some students that included parents, teachers, and even counselors that encouraged them along the way.

Despite the eagerness among most graduates to leave high school behind and start a new chapter, some students, like Tihishia Shaw, were grateful for the opportunities Maricopa High School provided them throughout the years.

“I’m ready for the future,” Shaw said. “I have every step that I need to get there [and] going to this school prepared me.”

The seniors of Maricopa High School's Class of 2017 graduated at the school's football field on Thursday, May 25.