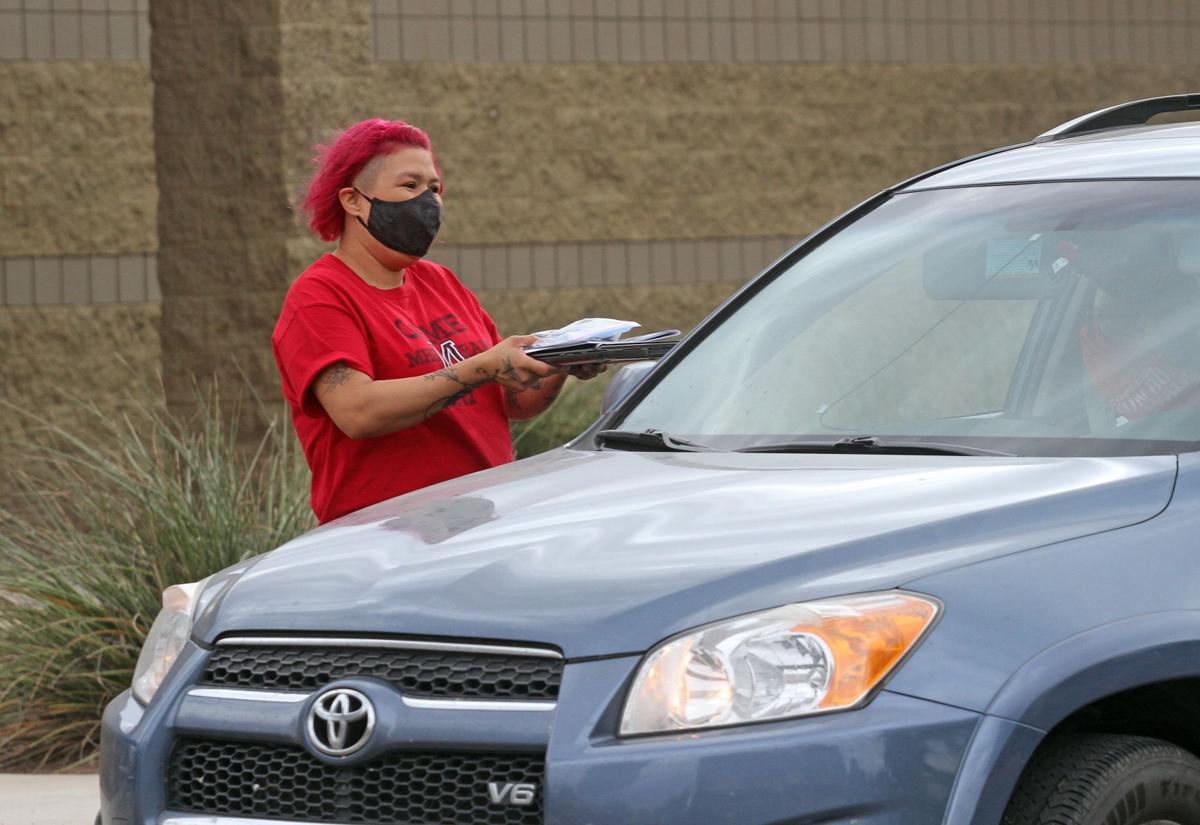 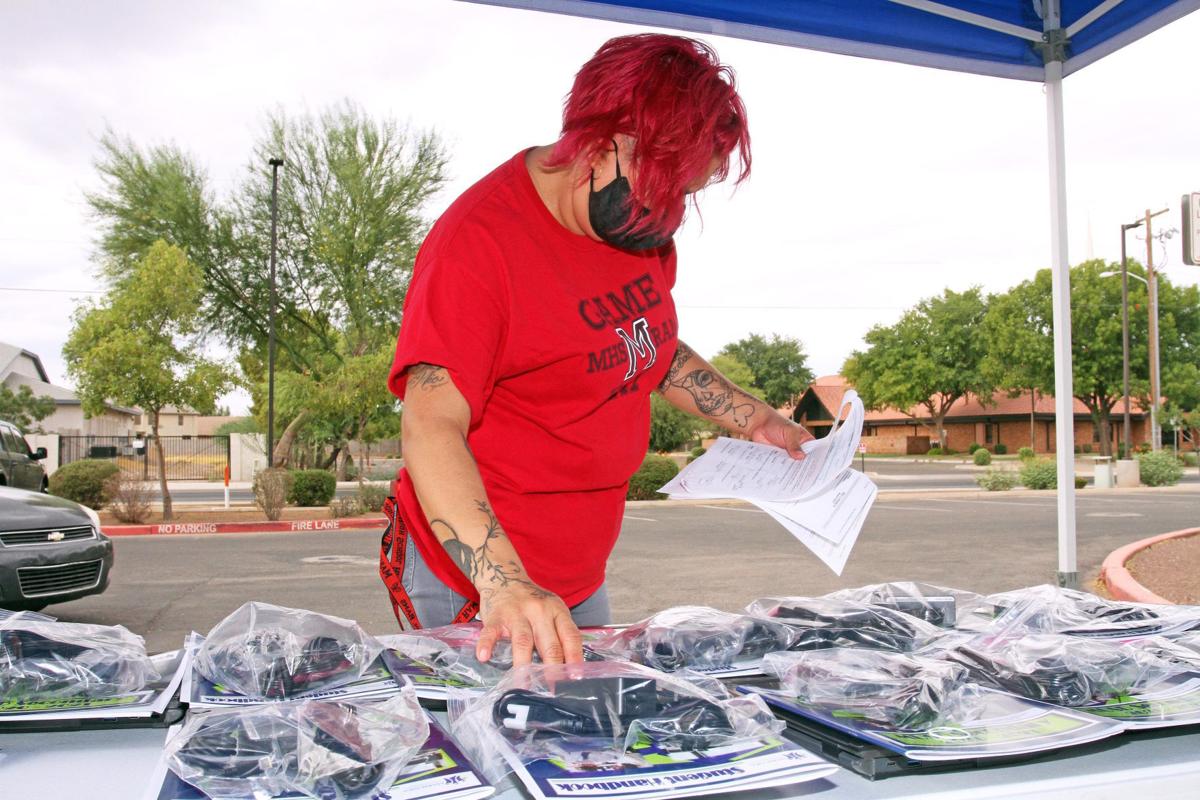 Alejandra Rosales goes through the technology to be distributed to Maricopa Unified School District families July 20 at Maricopa High School. 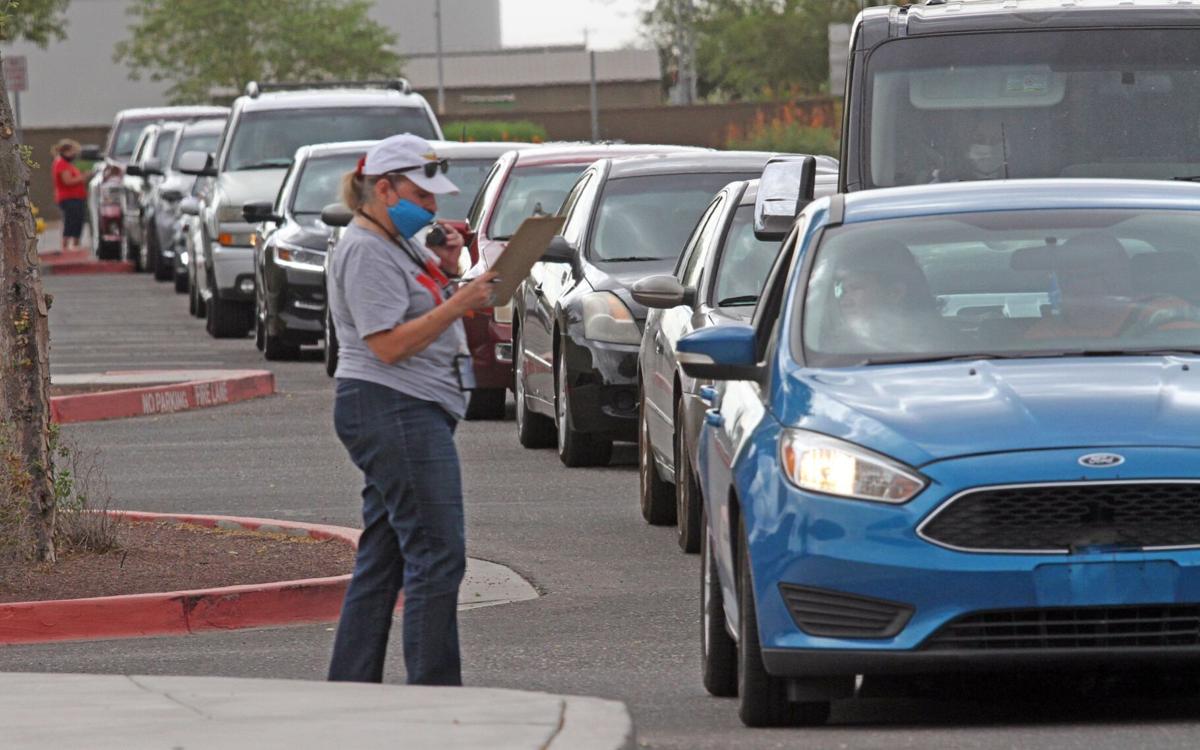 Alejandra Rosales goes through the technology to be distributed to Maricopa Unified School District families July 20 at Maricopa High School.

MARICOPA — The Maricopa Unified School Board on Wednesday voted 4-1 to delay the opening of in-person learning until Sept. 8, with board member Torri Anderson voting no as she wanted to extend the date until fall break for safety reasons.

The meeting began with a lengthy Call to the Public, where many parents and staff of MUSD voiced their apprehension to start school in-person on Aug. 17. The board then held an extensive work study to hash out many of the questions posed by community members, but still others remain undecided.

Virtual classes are still scheduled to begin on Thursday.

Below are several commonly asked questions posed by both the community and the board that were answered at Wednesday night’s meeting and through information published to MUSD’s website.

If a teacher tests positive for COVID-19, are they required to quarantine for two to three weeks, and is their sick leave covered and paid?

This question was posed during call to the public, and reiterated by multiple board members during the meeting. Many were concerned about repeated exposures, and extended isolation periods that could affect teacher pay.

“Are they able to use workers comp? Are their sick days going to be affected? Because maybe it’s one case, they’re out for two weeks, and then a month later it happens again,” Anderson said.

“Beyond that, we would have to take that on a case-by-case basis. It may result in some unpaid leave,” Beckett said. “Our intent is to honor what is available — without gifting any funds.”

Beckett also stated that workers compensation “needs to be directly related to something that happened as a work-related injury.”

“That is at work,” Anderson pointed out.

“There would have to be proof that somehow they contracted COVID while they were working here. That would be our responsibility at that time,” Beckett conceded.

Beckett made it clear, however, that teachers would be held to strict reporting guidelines. Teachers will have to sign a form that states they agree to temperature checks, mask wearing, social distancing and regular cleaning protocols. Teachers must stay home when sick, leave campus immediately if they fall ill during work and report it to human resources.

“When it is determined that an employee has either been exposed to or diagnosed with COVID-19, the employee will be expected to self-quarantine for 14 days per the CDC guidelines,” states a document for teachers on the MUSD website.

They will also complete a self isolation form posted on MUSD’s website.

“I can’t reiterate it enough — student and staff safety is our priority,” Beckett said.

It was not immediately clear what measures would be taken to isolate students who had come into contact with an infected teacher or an infected student. However, Superintendent Tracey Lopeman said that the online curriculum’s purpose was so that, “on a day’s notice, we can shift to serving students and teaching and learning in that remote environment.”

She also stated they would need to come up with more definition around what quarantine means for students.

If a student tests positive, what will happen?

Board member Patti Coutre asked that the superintendent address this question sooner rather than later because the question was also posed by many concerned parents in the call to the public and on social media.

“Generally speaking, we have to partner with the health agencies, the county and the state, on what that looks like,” Lopeman said.

Lopeman said that closures were expected, but the breadth and duration of those closures remain to be seen.

“We would collaborate with the agencies to determine if it’s a short-term, smaller-scale closure, but we have to anticipate that there will be closures involved,” she said.

She continued there is a possibility closures could be extended, or that self-isolation could affect more than a classroom at a time. She also stated that cleaning processes could take anywhere from three days to two weeks.

“We will articulate those possibilities,” she said.

Where do my children go if I work during the day?

According to Lopeman, MUSD will begin offering an in-person learning space on Aug. 17 in accordance with Gov. Doug Ducey’s mandate.

“If we extend online learning past the 17th, we have to provide a location for in-person learning so that students have a place with internet access and supervision when parents need to go to work,” Lopeman said. “We have to do that because our funding is contingent on that.”

The district has already begun distributing the 5,433 laptops and 561 Wi-Fi hotspots to student.

When Anderson asked what students will do until Aug. 17 if they cannot remain at home, Lopeman stated that other programs such as Camp Copa and Boys and Girls Club would be able to help students, but there were some kinks to work out.

When are Camp Copa and Boys and Girls Club opening?

Boys and Girls Club will not be open until at least Aug. 10, according to Lopeman.

According to the website for Camp Copa, camp was moved Monday from Copper Sky Recreation Center to Pima Butte Elementary and Saddleback Elementary. Staff will be wearing face masks, and campers are strongly encouraged to do the same. Campers will be limited to groups of no more than 10 and hourly sanitation measures will take place including hand washing, surface and gym equipment cleaning.

“Right now we have a partnership with the city of Maricopa. They have extended their Camp Copa. That’s one way to fulfill the requirement, but that’s a 7 a.m. to 7 p.m. recreation kind of offering and it would be separate from the requirement from MUSD to operate during school hours,” Lopeman said. “We’re looking at a handful of avenues through which we can not only provide child care from 7-7 — and that would be a paid service — or that in-person location during school hours free of charge.”

How will you keep children and bus drivers safe on the bus?

This question was posed during the call to the public.

The MUSD board did not directly discuss this question during the meeting, but the district website addresses it in the following statement which is in accordance with CDC guidelines:

“Students will be required to wear a mask when in the hallways, in communal areas, on the bus, and entering and exiting the school,” the website states. “At the beginning of each day, staff and students will have their temperature checked with a no-touch thermometer at designated entry sites at each school. … Students will wash their hands when they arrive to the classroom and before they leave each day.”

What will students do to prove attendance when not in person?

Though teachers will be offering synchronous instruction, meaning live online instruction, the lessons will also be recorded for students who cannot log in at that time. Students will instead have the option of watching the videos later, but that raises the question of attendance.

“There are other ways that the state, under distance learning protocols, allows you to collect attendance,” Watson said. “One of those is later in the day, if a student is unable to attend for some reason a live session, but they submit assignments for those sessions on the day that you are taking attendance, we are allowed to go back and … mark them as present.”

The third method is to have parents keep a weekly log of their child’s learning. Regardless of the previous two methods, this weekly log is required by law for distance learning.

“We can compare that log to what we have from online sessions, from work that is submitted, but that log will also serve as attestations to attendance when it is signed by the parent and submitted to us in a timely manner,” Watson said.

What will happen to funding now that MUSD has chosen to delay school opening?

“Let’s say, we don’t feel comfortable, we don’t feel it’s safe, for students to return on the 17th, but the governor feels differently, what’s our funding situation going to be at that point?” Coutre asked.

Lopeman responded that, if that is the case, the district would have a 5% reduction to its average daily membership (ADM) to 95%. The governor made an announcement Thursday that did not change these specifications, or delay the opening of schools past Aug. 17, which means that this reduction still stands as stated in his orders.

“All average daily membership generated in a distance learning setting will be subject to a 5% base support level reduction for full-time students or a 15% base support level reduction for part-time students,” states the Arizona Department of Education in a PDF document last updated July 24. “These funds may be reimbursed with monies from the Governor’s Enrollment Stabilization Grant. School districts and charters must submit a distance learning plan to be eligible for the Enrollment Stabilization Grant.

MUSD board learns what minimally funded high school will look like

MARICOPA — With plans for the second high school on Farrell and Murphy roads taking shape, M…