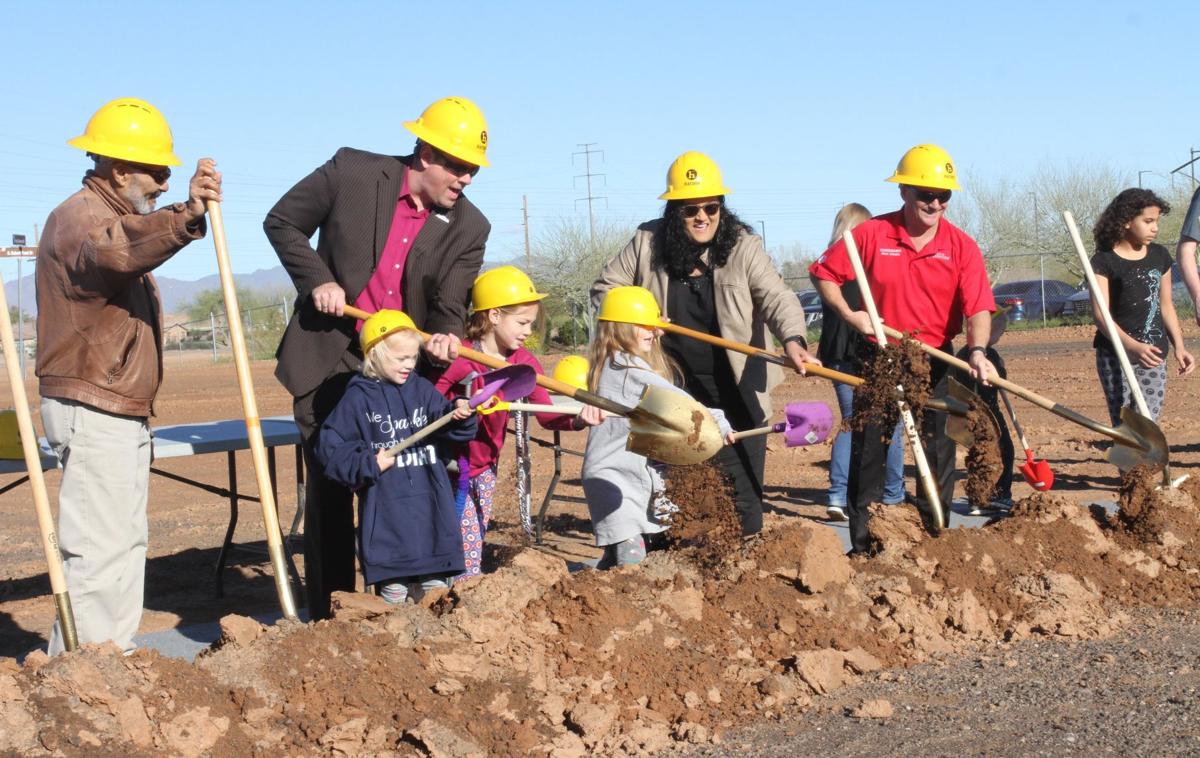 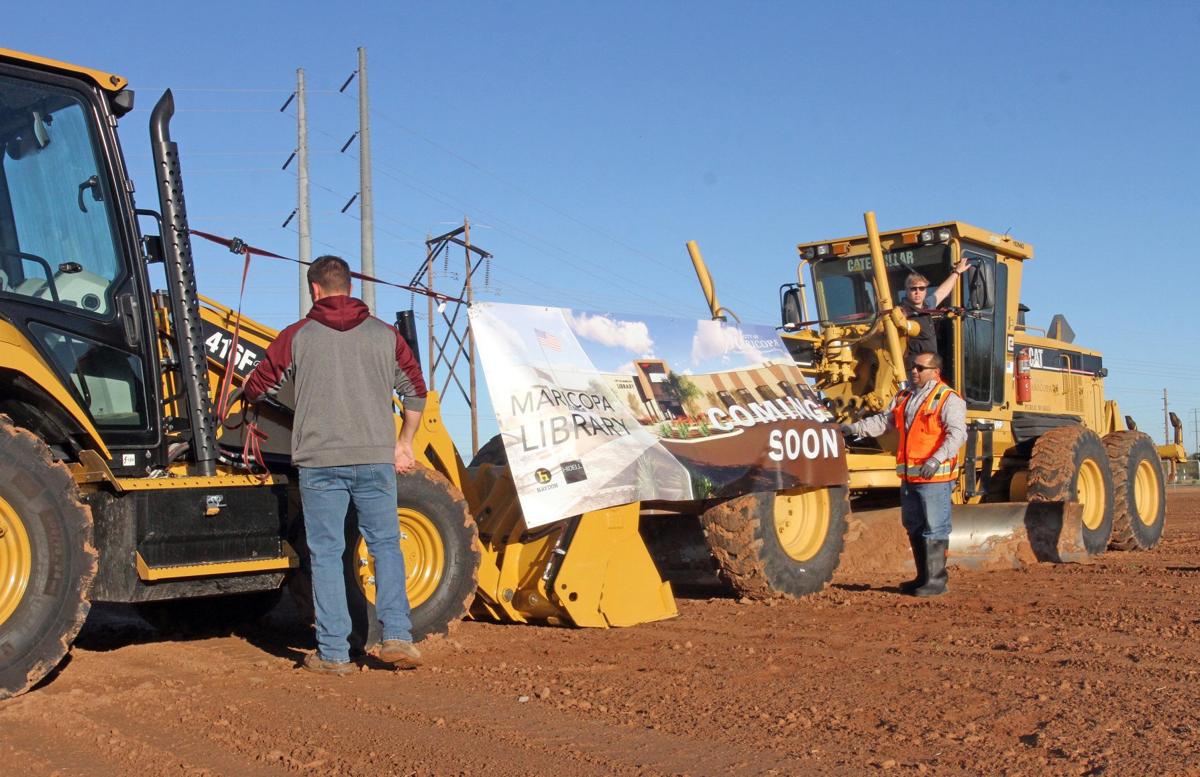 Tractors hold up a rendering of the new Maricopa Public Library. 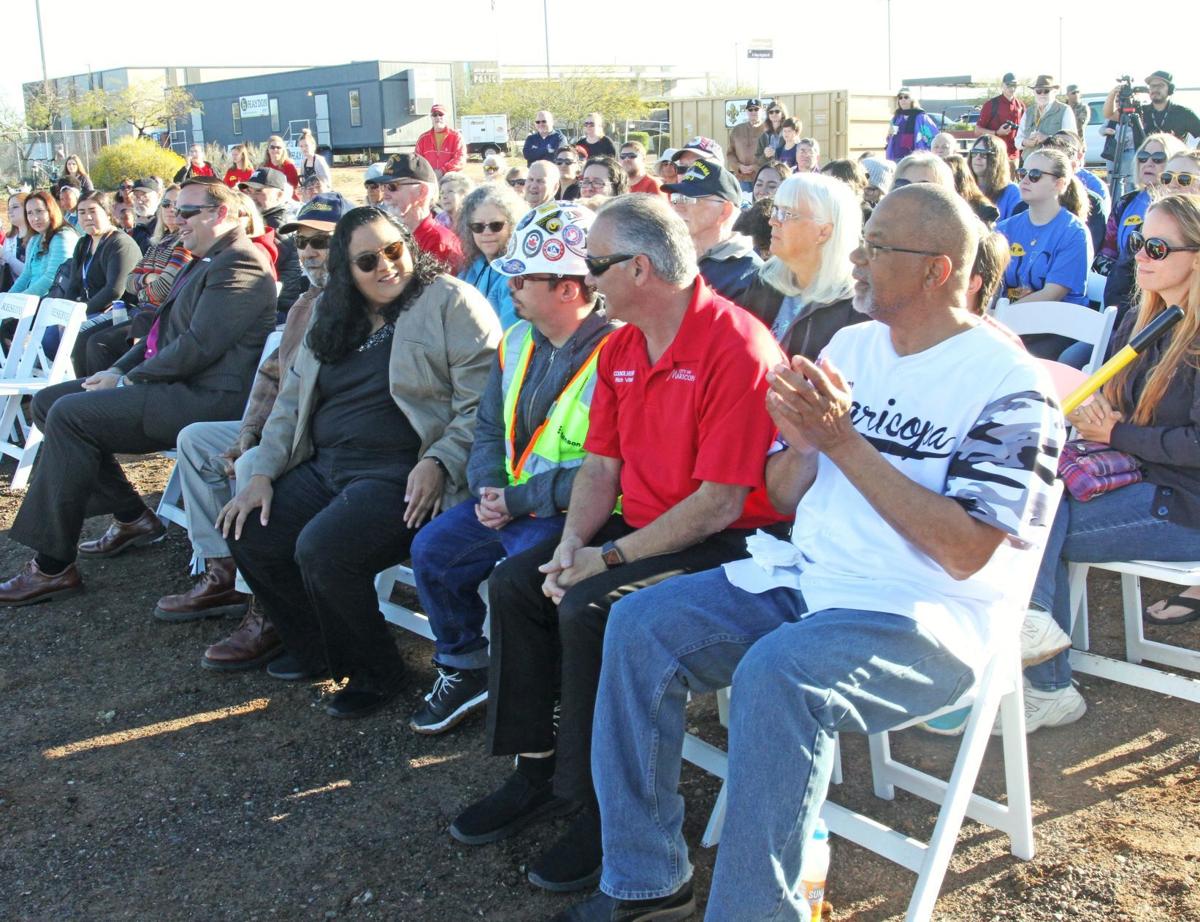 A crowd gathered Saturday for the groundbreaking ceremony of the new Maricopa Public Library.

Tractors hold up a rendering of the new Maricopa Public Library.

A crowd gathered Saturday for the groundbreaking ceremony of the new Maricopa Public Library.

MARICOPA — A groundbreaking on Saturday saw the first shovels enter dirt on the lot just south of City Hall in preparation for a brand new library with all the bells and whistles.

“Compared to our wonderful but small 8,000-square-foot library, which we’re lucky to even have that, we’re going to be able to have ... enough money to build a really, really beautiful library,” said Nathan Ullyot, director of community services for the city.

The new library will be triple the size of the current library at 24,000 square feet and will feature a number of new amenities. Ullyot says it will boast an adult wing, a young adult room and a youth and children’s section with a special doorway just for kids. On top of that, there will be meeting spaces both large and small, a lobby for special events and a whole host of new technology and computers, including a 3D printer.

This, compared to the library’s humble beginnings, shows how far the city has grown and changed over the years. Most Maricopans know the library’s current location on Smith-Enke Road, which formerly was the Maricopa Cultural Activity Center and was christened in 2009.

Before that, however, the library had a long and challenging past. It began in unused buildings around Maricopa, even occupying an insurance office at one point in the 1970s. It was flooded in 1983, and what was salvageable was shuffled to another unused building. It was christened in 1988 and “was the pride of Maricopa,” according to its website. It wasn’t until the city was incorporated in 2003, however, that it was donated and given the title of Maricopa Public library.

“For the Friends of the Library, the people who’ve been advocating for library service in our town, the parents of small kids and the folks who use the library on a regular basis, it’s a very cool thing to see from a connectivity standpoint and from a citizen standpoint that ‘Wow, we’re getting something new and fresh in our town,” Ullyot said.

Though the planning phase took about a year to complete, Ullyot says the feedback from the community has been overwhelmingly positive. With projects like this, Ullyot said the timeline can cause frustration, but the quick turnaround has left residents happy.

“I think everybody’s actually really excited about how quickly it’s moved with the leadership of the council and with our city manager, Rick Horst, who’s been able to find the money that we have through development services and things like that,” Ullyot said. “It’s just amazing how quickly it’s happened.”

The timeline for completion of the library is more or less a year from Saturday’s groundbreaking, though Ullyot made sure to be clear it depends on the same smooth sailing it's had for the last year.

“I think a year from now, we’ll be able to do a grand opening — assuming everything goes OK,” Ullyot said. “I mean, obviously, there’s some things up in the air now, but if everything stays on course, about a year.”