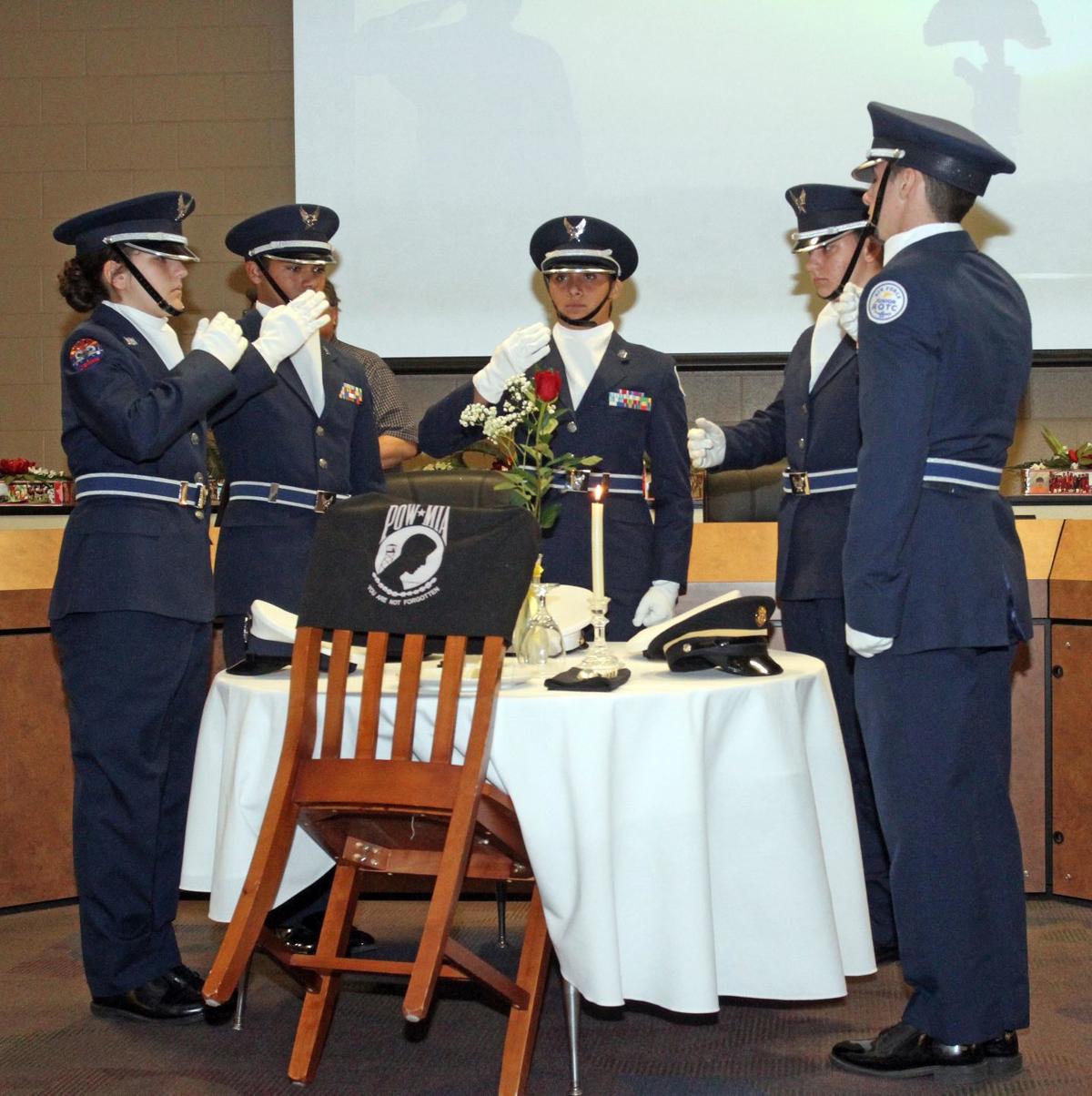 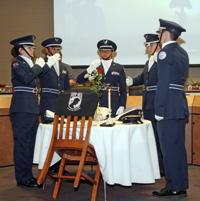 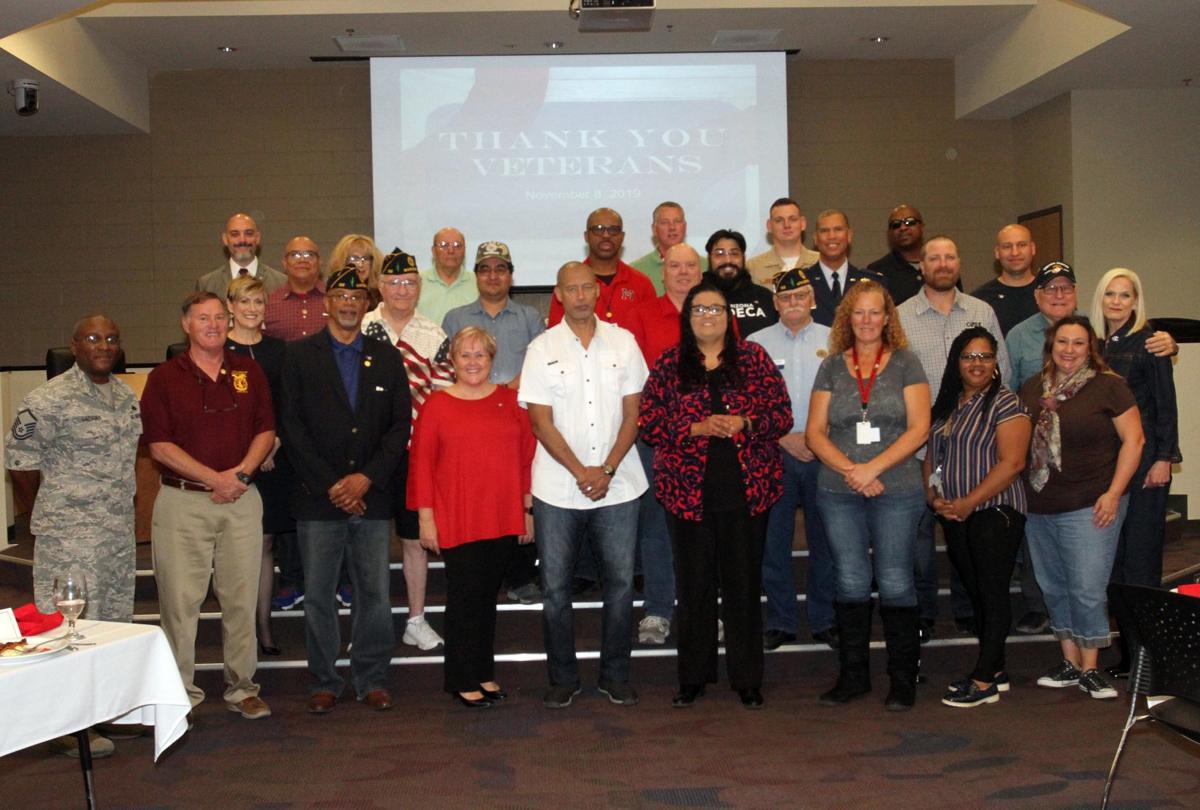 Attendees at the Maricopa Unified School District veterans breakfast gather at the end of the ceremony.

Attendees at the Maricopa Unified School District veterans breakfast gather at the end of the ceremony.

MARICOPA — Veterans of Maricopa were invited to attend a breakfast at the Maricopa Unified School District office Friday to celebrate their service and commemorate those who were lost.

Before the ceremony, attendees were treated to a full spread of breakfast food and beverage options by culinary students from Maricopa High School. Once the traditional pledge of allegiance and national anthem was finished, attendees regained their seats.

MUSD Superintendent Tracey Lopeman made a short speech thanking veterans for their contributions to the city.

“Through your example, you are helping us to teach every child in Maricopa Unified School District the values of hard work, self-discipline, patriotism and service,” she said.

She went on to mention that several teachers from MUSD schools were in attendance as retired military, and that their coworkers had covered their classes today so they could attend.

“If you’re a veteran and teaching kids in our classrooms or working at one of our schools everyday, I thank you for devoting your time to the future of our city, the future of our state and the future of our country,” Lopeman said. “So, on behalf of our 7,500 students and more than 800 staff members in the Maricopa Unified School District, thank you to all who have served or are serving our country. Today we honor your service and your sacrifice.”

Service members were then asked to stand and be recognized by their branch of military when their corresponding song was played. Edward Michael, a resident of Maricopa since 2013, was the only one to remain standing for the entire time.

Michael has served in the United States Marine Corps, the Army, the Navy and the Air Force in a career that spanned several decades. Michael fought as a Marine in Vietnam, left and came back to Vietnam in the Army, and then fought once more in the Gulf War. He also took a small break to become a firefighter and paramedic for Dayton, Ohio.

For Michael, the best part of the breakfast was to see the young cadets in uniform performing the ceremony.

“I like to see more younger people be involved because, you know, there’s not a draft anymore,” Michael said. “When I first entered, there was a draft, but I elected to go into the Marine Corps. I think the draft did one thing that we’re really missing in this country and it’s (that) we don’t seem to be conscientious of civics.”

Michael explained that, unless a person is a part of the military, they don’t fully understand the mental and physical strain. While in Saudi Arabia during the Gulf War, Michael blew out his knee, but he kept fighting. And in Vietnam, Michael witnessed the true casualties of war firsthand.

“I’ve seen a lot of body bags on helicopters, and until you see that and you go through that, you really don’t have a real grasp of what freedom really is,“ Michael said. “Some of the things I saw while we were out on patrol when I was in the Army over in Vietnam, the second time, you just couldn’t believe it. I came back and I was like most veterans, I was against the government.”

Michael had been a part of the protests against the Vietnam War in Chicago in 1967 as one of a group of veterans protesting the violent nature of the war. He understands perfectly the line a soldier walks between patriotism and duty.

After the honoring of service members present at the breakfast, a special Missing Man Ceremony was performed to commemorate those soldiers lost while serving the United States. After the ceremony, Local bagpipe player Dave Mundy played “Amazing Grace” while cadets from the junior ROTC at MHS were introduced as part of the observance.

Tracy Davis sat in the audience. She is another person who understands the sacrifice soldiers make when they choose to leave home and enlist. However, she views the military through the eyes of her son, Blane Davis, currently serving his ninth year of active duty in the Navy.

Davis founded the Maricopa chapter of Blue Star Mothers of America in 2013 while her son was deployed, seeking the comfort of fellow mothers of soldiers. She is now the treasurer.

The wheels started turning for Tracy when her daughter moved out, and she was left with an empty home and a son away at war.

“She moved out and I just had this major empty nest thing going on,” she said. “I was like, ‘I don’t know what to do with myself now.’ And then I actually connected with some other military moms on Facebook that lived here in Maricopa and we were all kind of commiserating like ‘I miss my kid,’ you know, it’s not like sending your kid to NAU or ASU or anything like that.”

The breakfast ended amicably, with veterans and attendees moving through the crowd to shake hands, offer condolences and give thanks to the veterans for their service.