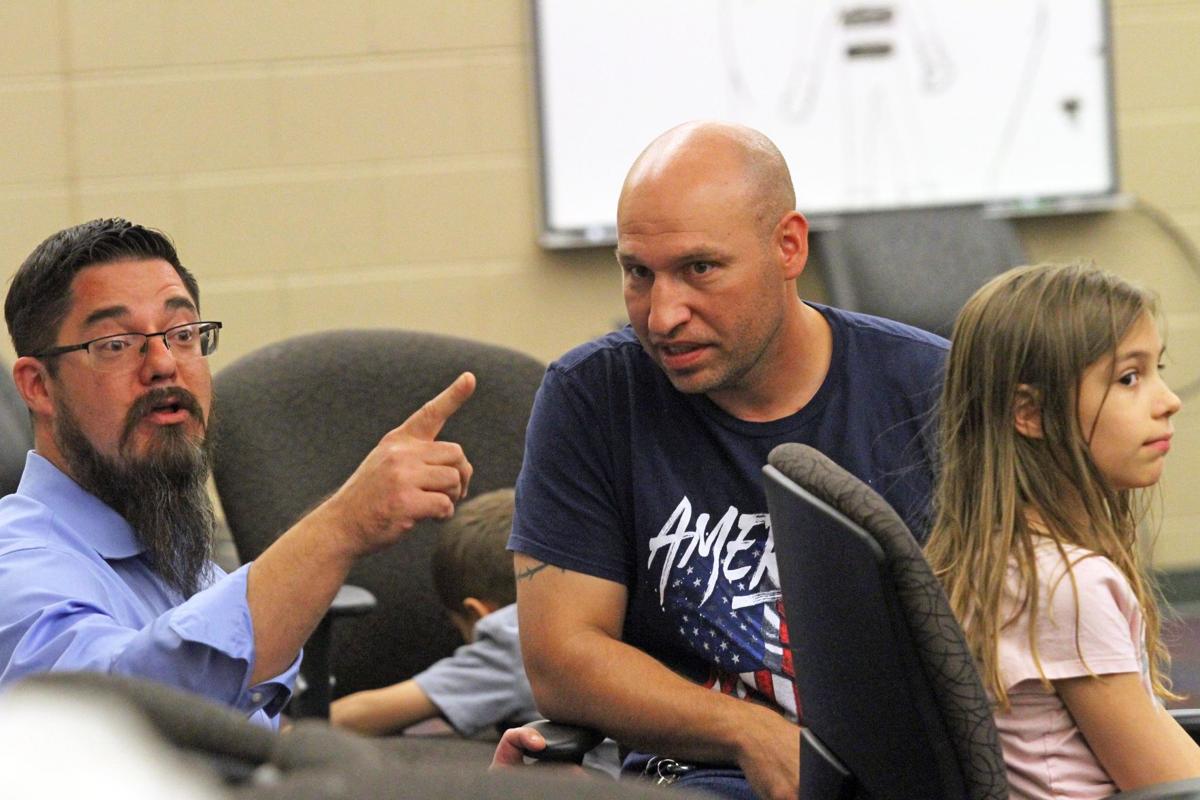 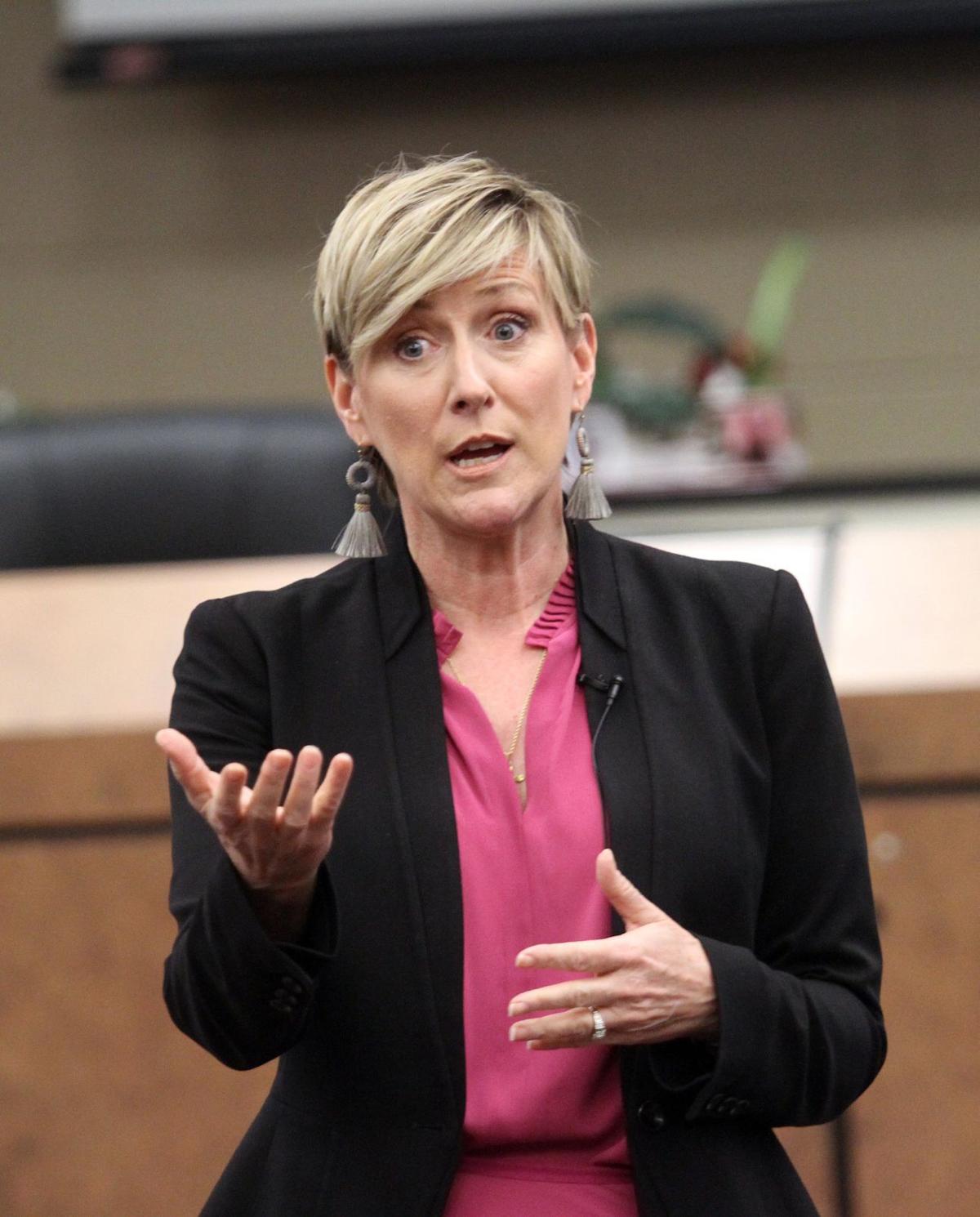 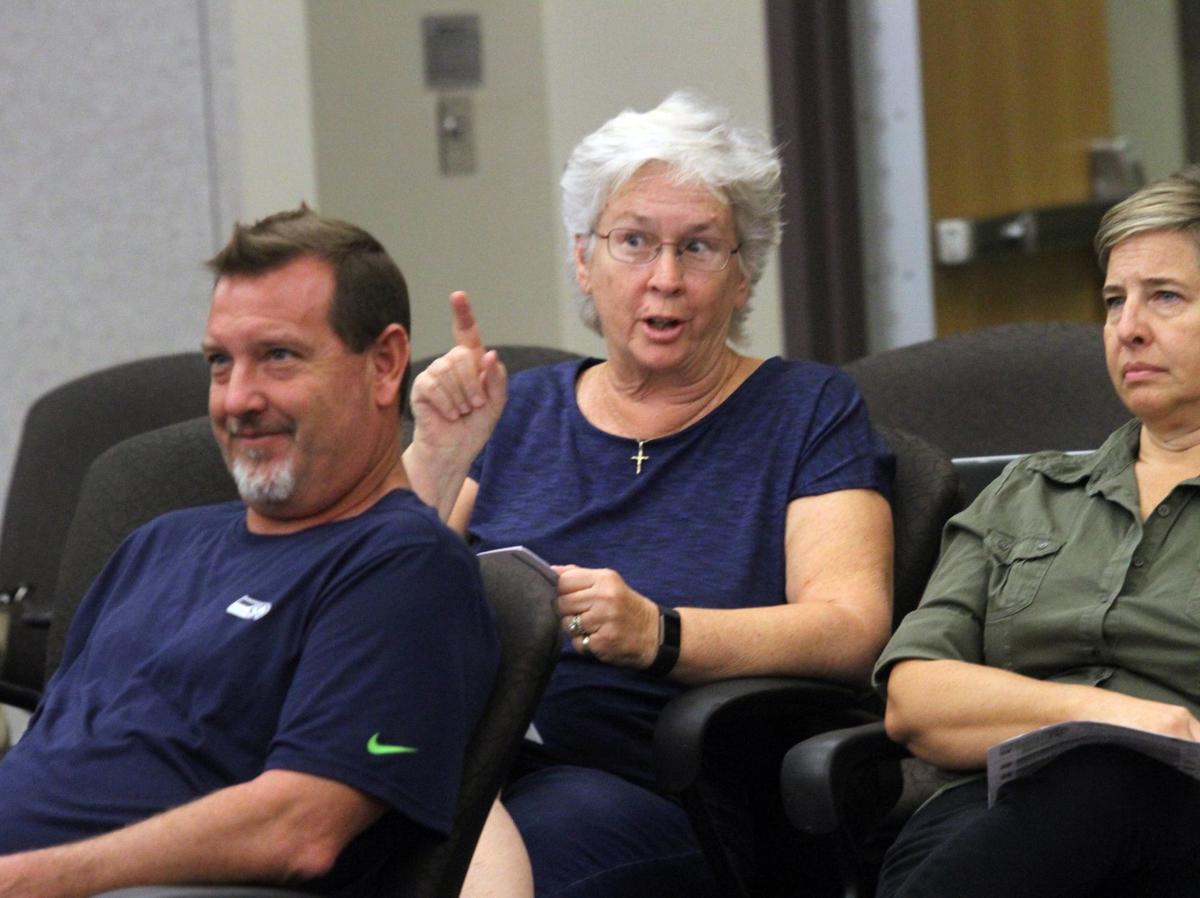 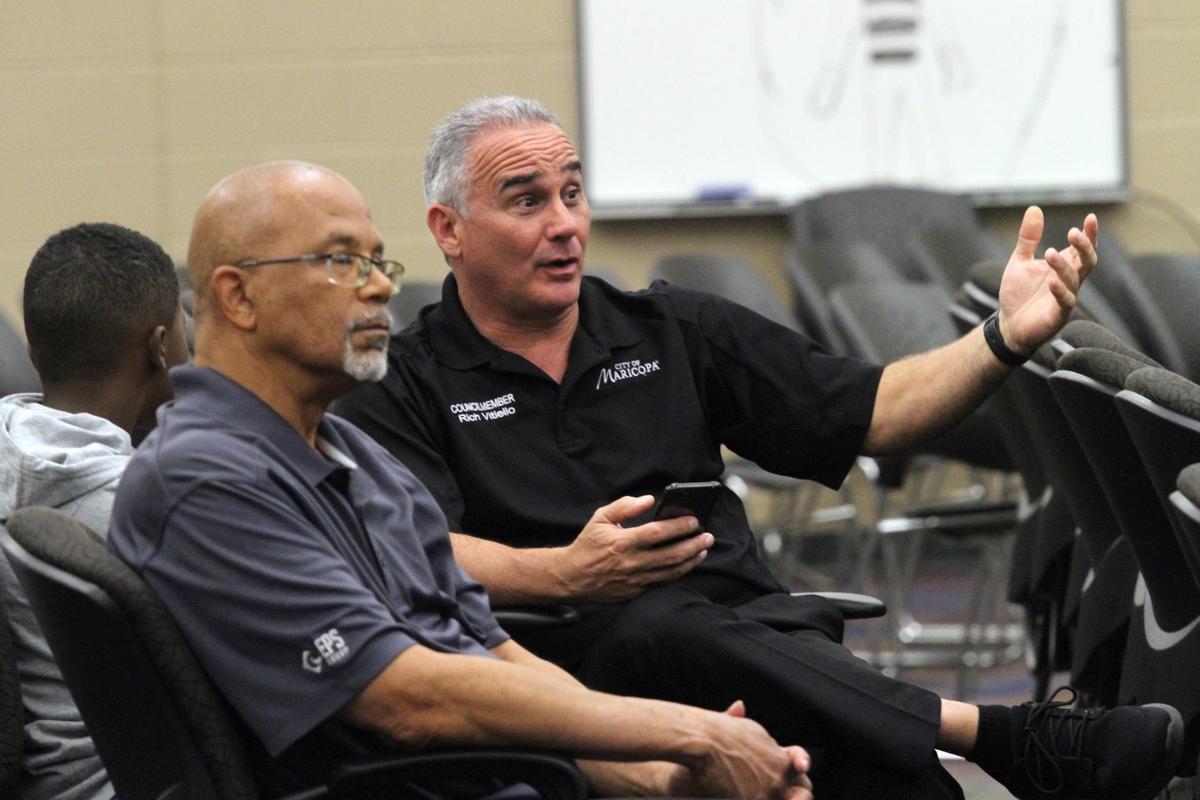 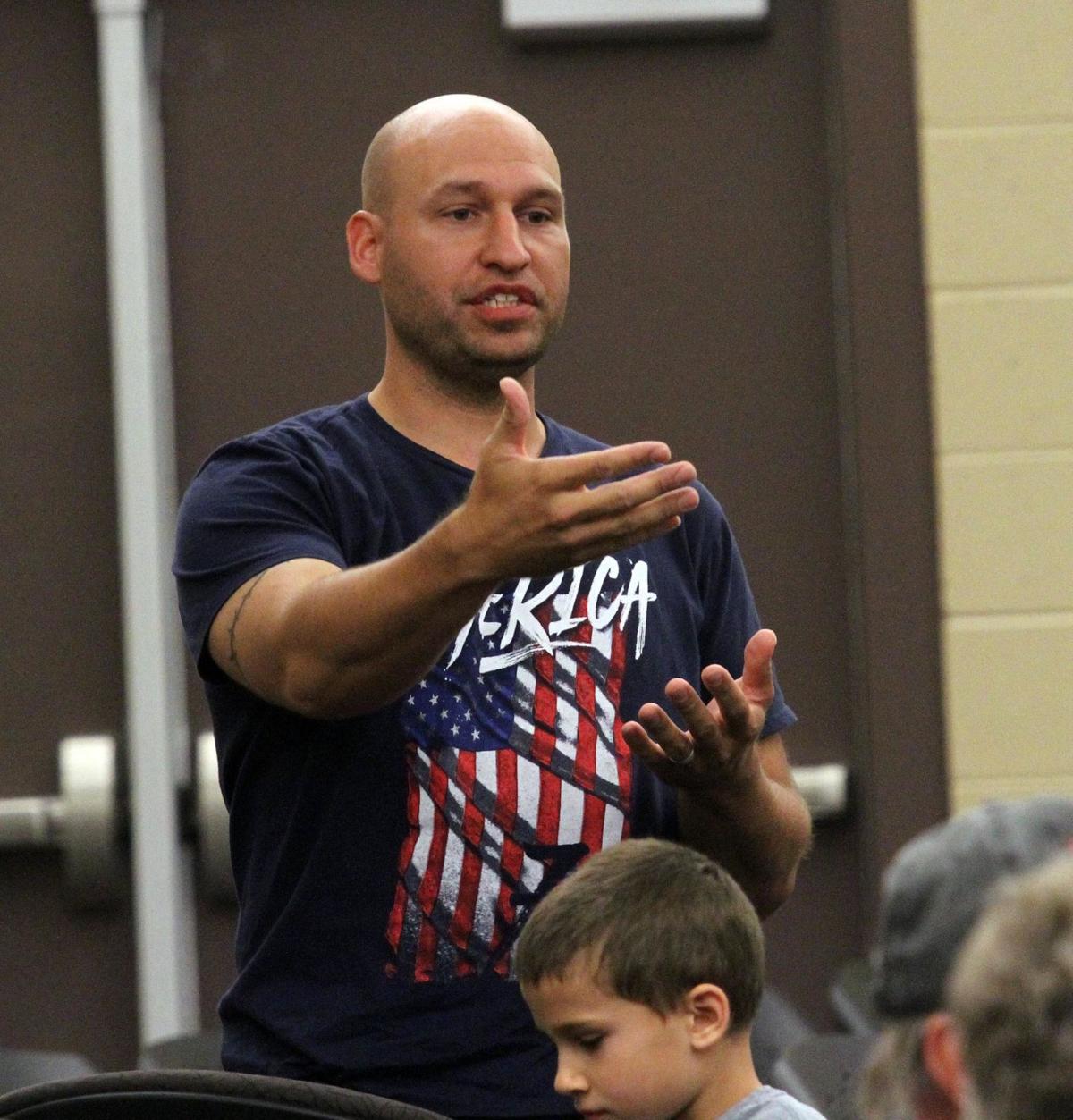 Daniel Cerkoney moved to Maricopa with his family from Wisconsin and voiced his dissenting opinion in the meeting discussing the $68 million bond issue proposed by Maricopa Unified School District.

Daniel Cerkoney moved to Maricopa with his family from Wisconsin and voiced his dissenting opinion in the meeting discussing the $68 million bond issue proposed by Maricopa Unified School District.

MARICOPA — Just a couple weeks before the issue is set to be decided, residents were invited to share their views supporting or opposing a large bond issue proposed by the Maricopa Unified School District.

MUSD officials sat down with the community Tuesday to discuss the newest attempt to secure bonds for a new high school, among other improvements. Heading the meeting was Tracey Lopeman, superintendent of MUSD.

The bonds, if passed by voters, would allocate $68 million to buy new school buses, increase safety and security, address aging buildings and help build a new comprehensive high school. Though the State Facilities Board has already confirmed $26 million in funding, Lopeman argues the money is not sufficient to build a school large enough to fully service the students’ needs.

Lopeman cited a demographic expert’s findings that total student enrollment may reach 11,000 to 13,000 students over the next eight years. She also stressed that each additional year that this bonding is delayed, the higher construction and maintenance costs will become.

“If SFB has only given us a third of what is necessary, that’s what drives us to this point here — asking our voters to approve a $68 million bond, most of which would go to supplement that SFB money to build a comprehensive high school, not just a starter high school,” Lopeman said.

She wanted to clarify the difference between the override voters passed in 2016 and the current bond proposal. The override money given to MUSD can be used only inside the classroom, focused mainly on increasing teachers’ pay.

The bonds, on the other hand, would be able to support the physical school buildings where the override could not, helping to maintain and replace air conditioning and roofing and do weatherization as well as building a new school.

The bonds would have a lifespan of 10 years, during which time the money could be used to address aging equipment and emergency issues such as roof repair.

Lopeman went on to detail that the current Maricopa High School sits on about 40 acres, while the average comprehensive campus would operate on about 60 acres. Currently MUSD only owns parcels of land up to 12 acres, according to Lopeman. The school district would need to sell the land and purchase a larger parcel, if the bond issue is passed.

Members of the community expressed their concerns about the breakdown in spending for the $68 million. JoAnne Miller, an 11-year resident of Maricopa, was concerned about the $2 million allocated to the repair and maintenance of the administrative building, which was built in 2009. She also voiced concern over an increase in her taxes, a concern shared by others in the audience.

“It’s going to raise my taxes considerably. They’re already going up for the school district,” Miller said. “Fifty bucks next year; $50 doesn’t sound like much, (but) when you’re on no income coming in except for retirement, that’s a lot of freaking money. I’m sorry, ’cause everybody else wants their two cents — the water department does, the electric does. Giving it to the schools, when I don’t see good management of the schools, it makes it very hard to say ‘yes.’”

Lopeman agreed that taxes would need to be raised, at about $122 per $100,000 in net assessed evaluation, or about $10.17 a month for non-business taxpayers.

Some members likened it to a monthly subscription service. “It sounds like if I cancel Netflix, I could fund my son’s high school,” said one attendee. Others in the room were less happy with the idea, citing that the $68 million is only recommended based on estimation and trends.

Daniel Cerkoney, who moved from Wisconsin to Maricopa with his wife and four children in August, voiced his concerns over the increase of taxes as well. Cerkoney stated that he moved to Maricopa for the lower tax rates to begin with, and said raising them might make the city less appealing to newcomers.

“There was no tangible evidence, no proof that any of that additional money is being used wisely,” Cerkoney said. “You have to consider people that are on fixed incomes who, if you guys continue to add these taxes, are going to (say), ‘You know what? I’m going to get out of here before it gets worse.’”

Merry Grace, a mother of a student at Maricopa High School, responded by describing what the average day is like for her son in the overcrowded school.

Grace described buses returning to the school twice to account for all of the students needing transportation, overworked counselors, scarce lab equipment and a lack of security. Her son had no desk for the first few weeks of school, and his schedule is changing regularly in order to control class sizes. Grace believes the new school is a necessity.

“It’s a lot more than just a building,” she said, tearing up. “It’s to benefit these students and I wholeheartedly believe in this district, and these kids deserve it. They deserve a better future and better opportunities. And it should be that because we are Maricopa, these kids get the best, not because we are Maricopa, they don’t get the best.”

Grace asked the superintendent what the consequences of not passing the bonds would mean for her son and his classmates, and to that, Lopeman answered the district would attempt to move forward with a “starter school” within the original budget of $26 million and push for the bond approval again next year.

“Where are we going to put our kids? I have grandchildren. That’s who I’m talking about,” said Councilman Rich Vitiello. “Whether it’s $10, $20, $30 or whatever the case may be, I look at this in the future of our children — future council members, future governor and mayor coming out of this and it’s teachers coming out of our school district. If we don’t invest in our grandchildren and our children today, when are we going to invest in our children?”

Ballots must be mailed in on or before Oct. 29, or dropped off at a polling location Nov. 5.

MARICOPA — School policies aim to keep kids in the classroom as much as possible, but when s…

MPD to review policies after narcotics left behind at Butterfield Elementary