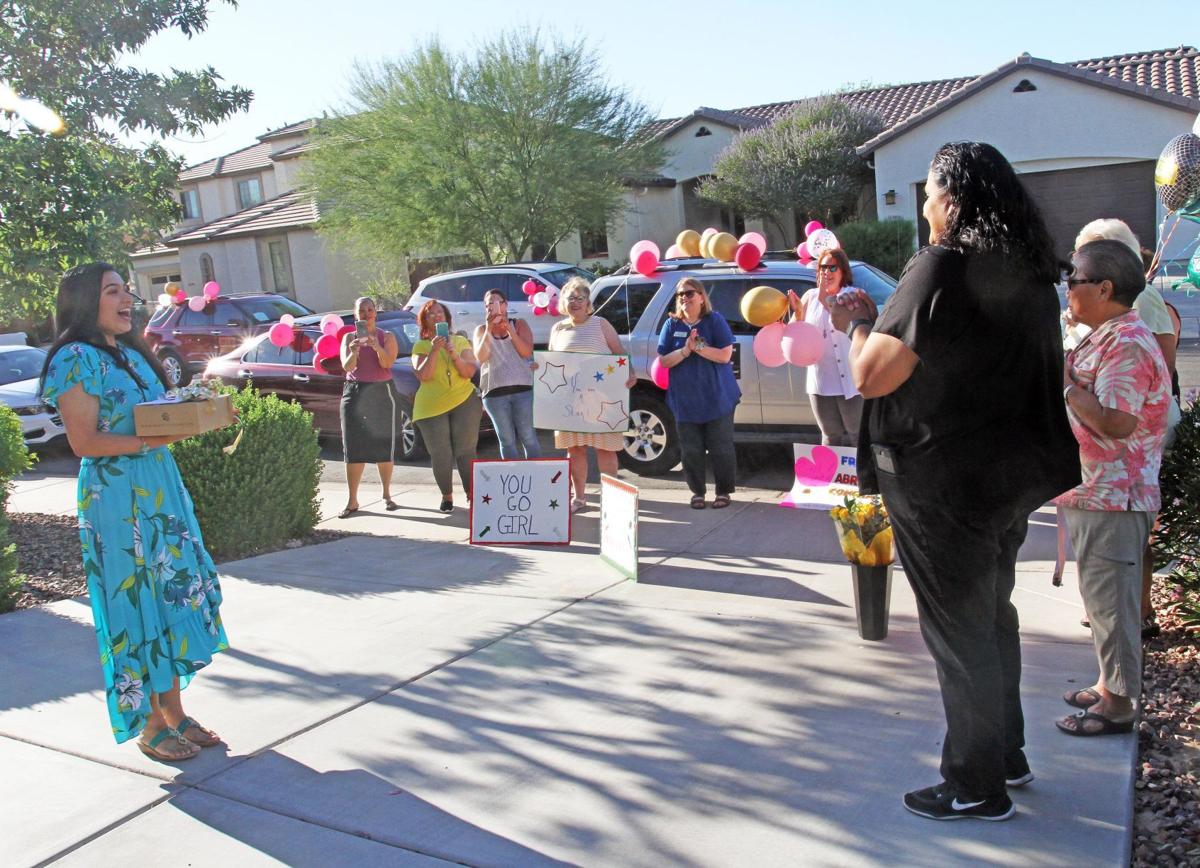 Maricopa High School valedictorian Freya Abraham is surprised with a parade Wednesday in front of her house in Maricopa. The parade was put on by Zonta International as a way to celebrate Abraham winning one of the organization’s scholarships. 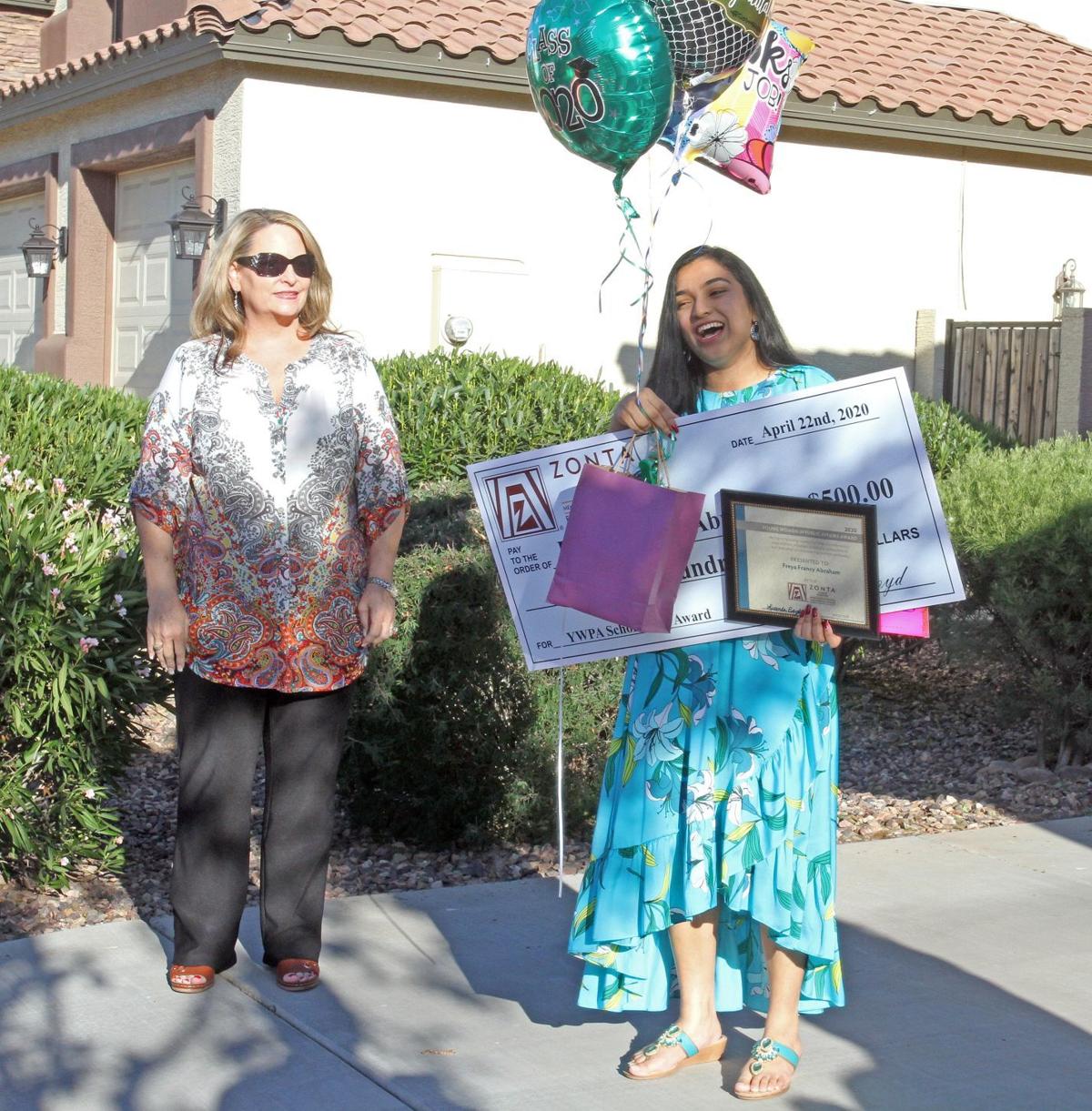 Freya Abraham receives a scholarship from Zonta International on Wednesday at her home in Maricopa.

Maricopa High School valedictorian Freya Abraham is surprised with a parade Wednesday in front of her house in Maricopa. The parade was put on by Zonta International as a way to celebrate Abraham winning one of the organization’s scholarships.

Freya Abraham receives a scholarship from Zonta International on Wednesday at her home in Maricopa.

MARICOPA — Maricopa High School’s most distinguished senior in its 61-year history has made history again. Freya Abraham, 17, has been awarded a national award from the White House.

United States Presidential Scholars are outstanding teens from each state and are also chosen from special categories for a total of 161 seniors nationwide. Abraham is the only female student from Arizona to receive the award, and she said there are two male recipients from Arizona, including a career and technical education student.

Abraham said she wouldn’t let herself dream about earning this honor. Unlike her goals to become valedictorian or receive scholarships for college — both boxes are checked off now — she thought becoming a U.S. Presidential Scholar was out of her reach.

“I remember being in the sixth grade and looking up Presidential Scholars, and they all had like 1600s on their SATs and they started nonprofits,” Abraham said. “There’s certain things that you just don’t think you can grasp, but you’re gonna try to grasp them (anyway). … I was like, ‘OK, if I work hard I could be valedictorian,’ and, ‘OK, if I work hard I can get college paid for,’ but this was something I never thought would be next to my name.”

Though being named as a U.S. Presidential Scholar is not a monetary award, traditionally the prize is an all-expenses-paid trip to Washington D.C. to meet the president and tour national landmarks. However, due to COVID-19, this year’s trip has been canceled.

“Unfortunately, given the current situation regarding COVID-19, we have concluded that we will not be able to hold a traditional National Recognition Program here in Washington, D.C.,” the congratulatory email said. “We will be mailing you your medallion and are moving forward with a plan for online recognition. We will be contacting you soon with additional information.”

But Abraham says the award itself is enough.

She’s worked hard to achieve the U.S. Presidential Scholar status, but she says God has worked harder in her life. She has attended Our Lady of Grace church since she was 4 years old, and the teen said she has noticed God in her life more than ever in the last week.

Indeed, Abraham has had quite the week of graduation celebrations and exams, including another surprise.

“My family doesn’t do surprise things, it’s a very American thing to do and my parents’ version of the surprise is to tell me that we’re going to do something,” Abraham joked.

So she knew something was up when her mom asked her to go get dressed and look nice on Wednesday night. When car horns started blaring outside, Abaraham first thought it was the police, but then she opened her front door.

“I thought it was like something out of a movie,” Abraham said. “These cars, they’re coming down the street and there’s balloons and — it was so cool. The women put so much thought into (it). They gave me a card and there were flowers and it was literally so special, I was blown away.”

The women responsible are part of Zonta International, a 100-year-old organization that works to empower women through service and advocacy. Zonta Club of Maricopa just celebrated their second anniversary, and the ladies all showed up to be a part of Abraham’s special parade.

They were there to deliver an oversized check for $500 to Abraham as their Young Women of Public Affairs scholarship recipient. Abraham had applied for the scholarship after reading about on Zonta.

“I think what makes them unique is that they really are focused on action,” Abraham said. “They think ‘What can we do for women?’ It’s not just awareness, but it’s also about the service aspect for making sure that, specifically for women, they can provide opportunities.”

As part of her application, Abraham was asked to detail a women’s issue she was passionate about.

“Girls tend to think that if they believe in themselves or are confident in themselves, we shouldn’t do that too obviously,” Abraham said. “We shouldn’t offend someone else with our desire to be ambitious or to get things done. And so we tend to place ourselves in a less advantageous position, just naturally.”

As the driver of her own life, Abraham is all too familiar with being perceived as “overly-aggressive” in the pursuit of her goals. It’s something she says isn’t a label often put on her male counterparts.

Her “aggression,” however, is what has gotten her to where she is today, a U.S. Presidential Scholar and the newest Zonta Scholarship winner.

At her graduation Thursday morning, she was able to say a final goodbye to the teachers and staff at MHS who helped her along her journey.

“They made me tear up a little bit,” Abraham said. “When we were driving past, our teachers were waving and they were cheering. It felt really warm and personal. … Our school district really, really, really went all out. They tried their hardest to make this a touching experience, and I feel like they succeeded. I really appreciate what they did.”

She received a celebratory cupcake and got to get out of her car to take photos with other students and make a few last memories before beginning her next journey.

Abraham will attend the University of Arizona in the fall as a Baird Scholar and plans to study neuroscience and public health to become a pediatric neurologist.

MHS valedictorian the most honored student in school history