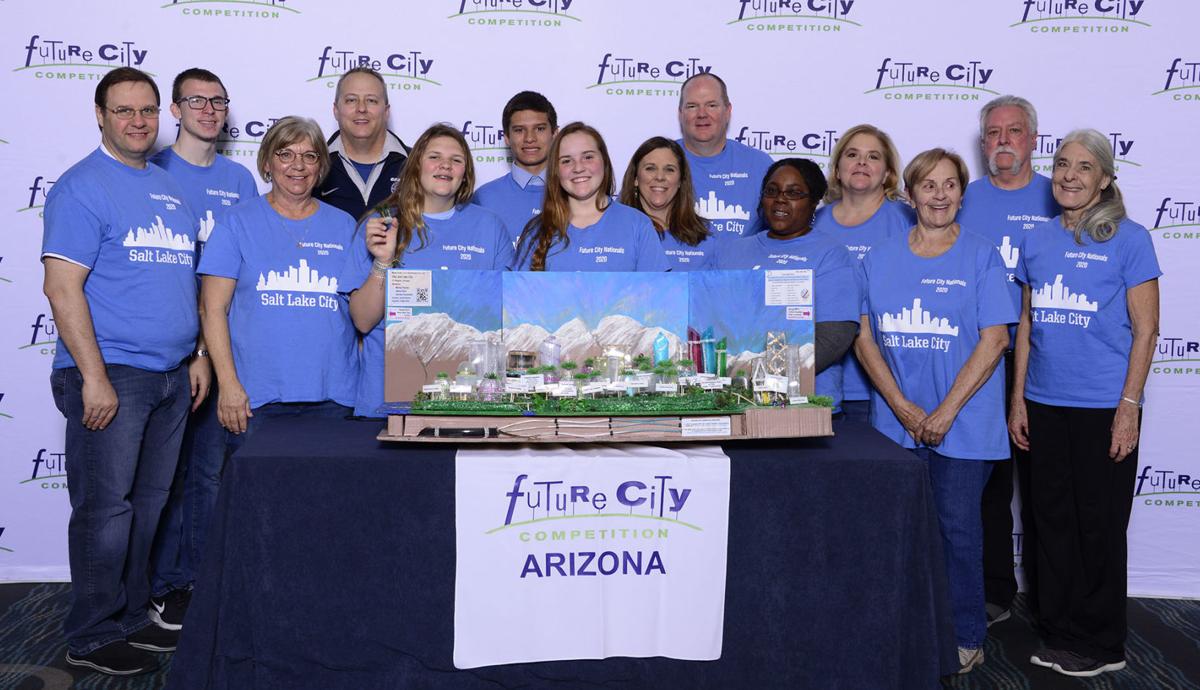 The team of eighth-graders from Maricopa Wells Middle School surrounded by "Team Arizona" - the parents, teachers and mentors who helped them get to the national competiiton. (Photo by KRR Photography Limited) 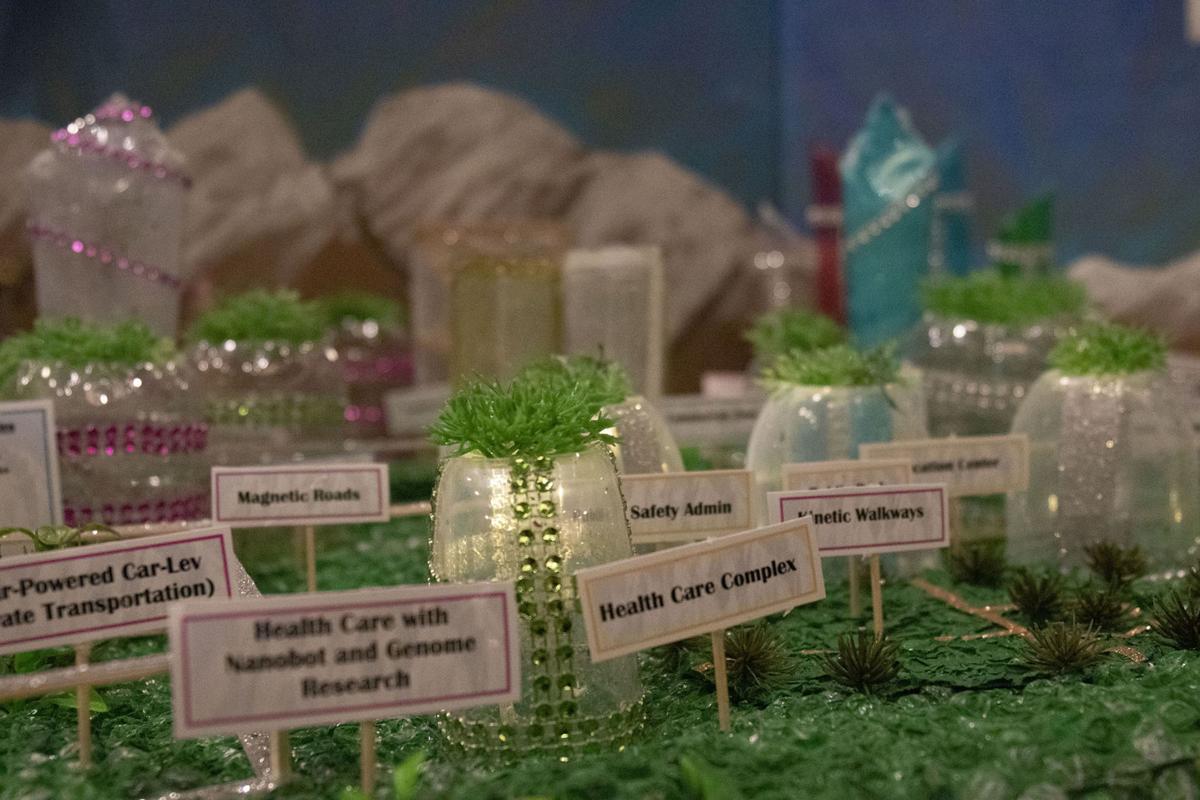 It may be the city of the future, but it's made with pieces of the past: One of the rules of the Future City Competition is that teams must use recycled materials to build their models. (Photo by MacKinley Lutes-Adlhoch/Cronkite News) 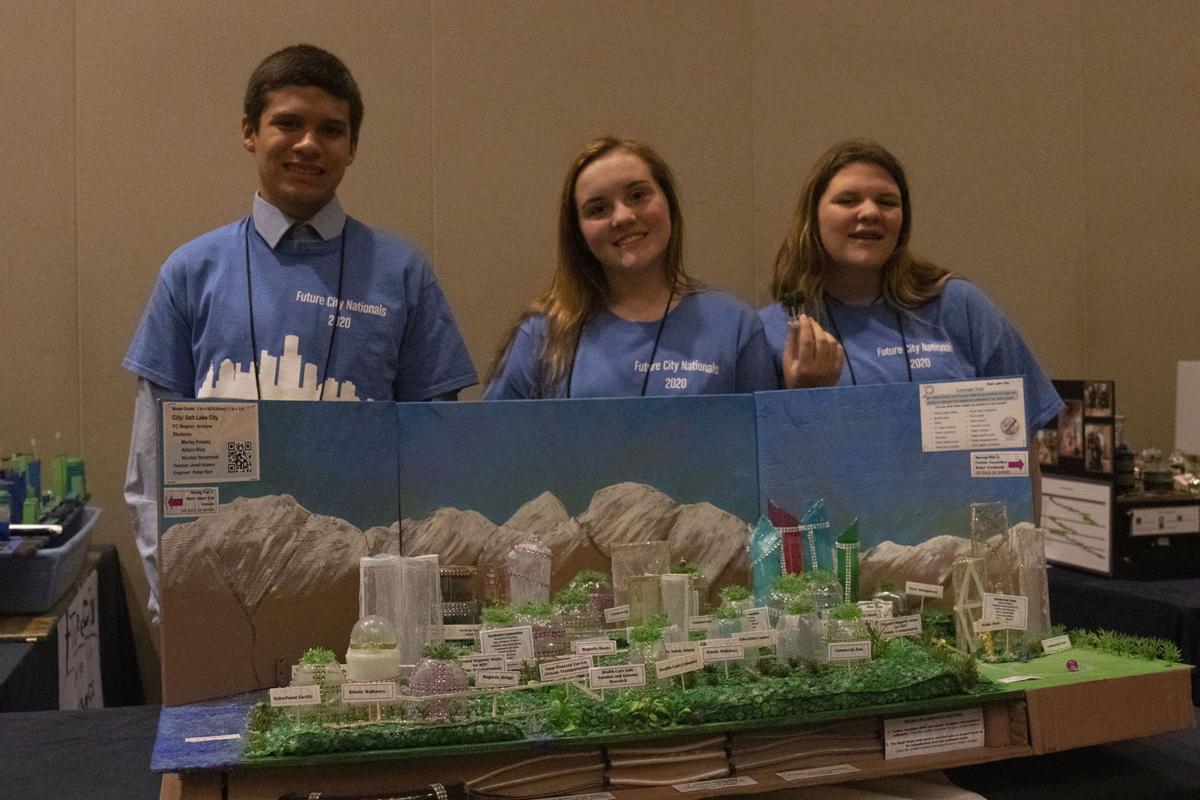 Maricopa Wells Middle School students Nicolas Yendrzeski, from left, Marley Polosky and Allison Rice show off their vision of the Salt Lake City skyline in the year 2120 as part of a Future City Competition.

WASHINGTON — The team of students from Maricopa Wells Middle School in Washington this week for an engineering competition has a plan.

In four years, 13-year-old Marley Polosky plans to be studying engineering. In 10 years, Allison Rice plans to be a marine biologist. In 20 years, Nicolas Yendrzeski plans to be president.

And in 100 years, the three plan for Salt Lake City to look a whole lot different.

Their vision was on display this week at the Future City Competition in Washington, where the three were competing after beating more than 200 other teams from Arizona to reach the national competition.

The competition, now in its 28th year, challenges students to solve a problem of today by designing a city 100 years in the future. This year’s theme was “Clean Drinking Water: Tap into Tomorrow.”

“It’s so much fun. I like being creative,” said Allison, who is back for a second year with Marley. “Sometimes in the real world, apparently, people think you can’t be creative, but look where my creativeness has gotten me.”

Fun, but hard work, too. The Arizona team began working in July on its vision for Salt Lake City and put in as many as 20 hours a week trying to solve the city’s water pollution through innovative engineering solutions they devised.

Nicolas said their goal was “to come up with innovations so that you can find out new ways to clean up the pollution that already exists and prevent pollution in the future.”

The solutions they came up with call for carbon nanotubes and a water smart grid running through the city. The carbon nanotubes would filter water, and the smart grid would detect pollutants in water and distribute it accordingly — the cleanest to showers and sinks, “gray water” to toilets and for agricultural use and “black water” for industrial use.

They said they also designed a system built to withstand natural disasters.

“Together, those make a really resilient system,” Allison said of the team’s proposal. “The smart grids are underneath each of our zones, so if one zone went out, all the others would stay running.”

Future City program coordinator Jake Williams said the competition combines many different elements of engineering to expose middle schoolers to the many different jobs engineers do in the real world.

“That allows for students to have a hands-on interactive experience where they actually get to learn about real-world issues and think about how problems can be solved in the future,” Williams said.

“I’ve seen kids who would not stand up in front of a room and talk, to kids that will get on stage, answer questions by engineer mentors, meet with reporters,” he said. “Normally they don’t get the opportunity to say, ‘Here’s my idea,’ and present it to real professionals — I think that’s very powerful.”

In addition to an essay and a physical model of their city — that has to be made of recycled materials — students must also present a digital version of the city, created with SimCity software, that is judged by a panel of professionals.

Presentations and judging were Monday, with winners scheduled to be announced Tuesday. The first-place team will get a free trip to Space Camp, while the top five teams will get cash prizes to support their schools’ STEM — science, technology, engineering and math — programs.

The eco-friendly upgrades were intentional, the students said. Allison, the aspiring marine biologist, said her bedroom walls are painted an “ocean blue” and covered in stickers of dolphins and clownfish.

Marley hopes to use her engineering studies first to mentor her little brother’s Future City team — part of the girls’ four-year plan to return to the competition in college — then to be an environmental engineer.

Nicolas plans to be president, already highlighting his administration will emphasize environmental protection, with Marley and Allison looking to be part of his Secret Service team.

The students said the biggest lessons they have learned is the importance of teamwork and creative problem-solving.

“Future City just challenges you to be creative but also to keep things realistic and be able to think ahead to our future and make a better future for ourselves,” Marley said.

But the real fun happens between stages of the competition, Allison said. The kids have become “best friends” in the process — and their hotel has an indoor pool, she said, so that’s pretty cool, too.