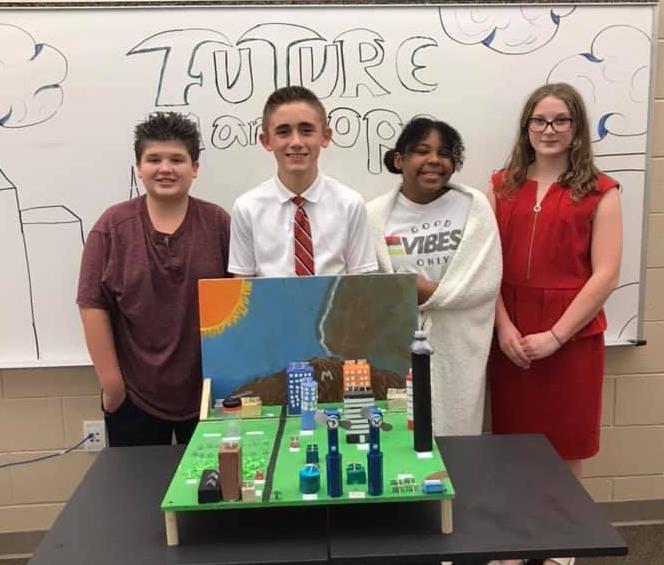 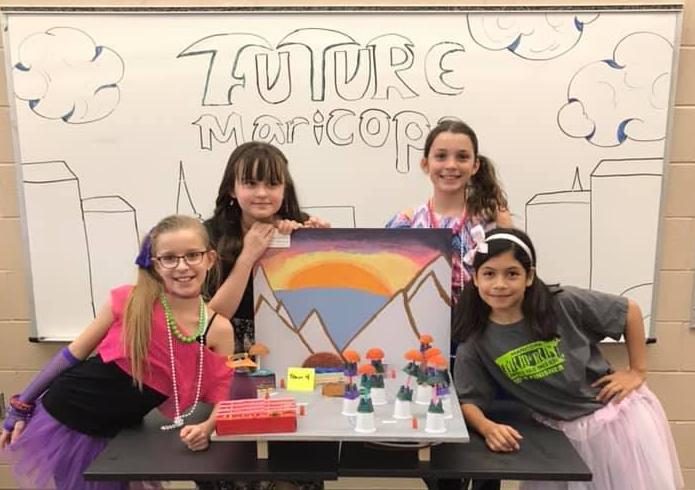 MARICOPA — The year is 2168 in a fictional city in Haiti when a massive earthquake strikes with the same power as the 7.0 quake that hit the Caribbean nation in 2010.

But unlike eight years ago when the Jan. 12 earthquake killed between 100,000 and 316,000 and devastated the capital city of Port-au-Prince, this fictional disaster doesn’t leave the city in the dark without power. Instead, it is a city with a resilient power grid designed by students at Maricopa Wells Middle School 150 years earlier in 2018.

The concept of a city that has a resilient power grid is part of a competition called Future Cities, which starts with this simple question: How can we make the world a better place?

It’s a question that is answered by sixth-, seventh- and eighth-grade students across the country by using imagination, research and design before being tasked with building cities of the future that showcase a solution to a citywide sustainability issue.

“The students are tasked to do a presentation and each year there’s a different topic, a specific problem that they are supposed to solve,” Maricopa Wells Middle School math and science teacher Robyn Rice said. “Their focus this year, their task was to create a city that had a self-reliant power grid that will be able to withstand natural disasters.”

The students, who are all seventh-graders, include Allison Rice, Ana Pamarino, Camille Troyer and Marley Polosky. They recently were in a state competition at Casteel High School in Queen Creek and took first place, earning them a trip to the national competition in Washington, D.C., Feb. 17-19.

“One of the things that set this team apart was the design of their model,” Rice said.

The city the students created is called Arbre de la Vie. They looked at three areas including emergency management with health and safety services, power services with sustainable and reliant power sources and livability with convenient services and sustainability.

For the year 2168, the micro-community services included health care, police and fire with buildings being earthquake-resistant, built with larger bases, and self-powered.

Unlike today, where a majority of Arizona power comes from a coal plant in northern Arizona, hydroelectricity from the dams of the Salt River or the Palo Verde Nuclear Generating Station, the power generated in Arbre de la Vie in 2168 consists of microgrids including solar windows, wind turbines, kinetic walkways or supercritical water.

“We have kinetic walkways, solar-powered cars and pretty much everything is supplied by their own power,” Pamarino said.

The idea of the microgrids, according to Rice, is the power is being supplied to one general area, such as an off-the-grid solar panel being used to power a house in a remote area.

As for kinetic walkways, the power is generated with movement such as a car cruising down the freeway. Every rotation of the tire creates energy and then is stored inside the car, like a hybrid car battery being recharged when it is using a gas-powered motor.

“It’s movement so as you walk on them, they take the motion of your footsteps and turn it into energy,” Rice said.

After 10 years, the livability is expanded for commercial, secondary schools, agriculture zones, high-tech industrial and kinetic roads, while health and safety is expanded in health care, police and fire centers.

As for power services in the year 2178, the biggest issue of outages is eliminated. Power lines are no longer around; instead, electricity is transferred through infrared waves. Pretty much just think of WiFi but instead of internet connectivity, it’s electricity going through the air.

By the year 2188, Arbre de la Vie has a sustainable budget, which means more amenities. Under livability, this includes tourism with beach resorts, theme parks and a mass transit system, while the health and safety management area includes more hospitals and research facilities.

“We’ve been doing this project for 10 years now and there has been a lot of good ideas that the kids have come up with,” Rice said. “Several years ago, one of the winning teams at nationals had the rent-a-bike idea. I can’t say that it came from that, but those types of ideas that we see in these projects, several years later you will see them. They will develop in cities.”

One of the first things the students will do before starting on their project is write a 1,500-word essay and play Sim City, a computer simulation game that allows players to design and build the city of their dreams while dealing with every scenario that an actual mayor, city manager or city planner would face such as budgets and zoning.

“They learn about zoning and budgets and see how a city actually works and then they take that and apply it into their model,” Rice said.

The Future City competition has been around for over 25 years and has been in Maricopa for the past 10 years. This will be the third time a team from Maricopa has made it to nationals.

In addition to the competition, the students will also take a tour of the U.S. Capitol along with a bus tour of Washington, D.C.

The last time a team from Maricopa qualified for nationals, Rice said then-Sen. Jeff Flake met with the group and took it on a private tour of the Capitol building, which included eating in the Senate cafeteria and taking the train from the Russell Senate Office Building to the Capitol.

Rice said that her husband is planning on contacting Sen. Kyrsten Sinema but doesn’t expect to be meeting with any lawmakers this time around given the potential for another government shutdown during that time.

“If it happens, that would be awesome,” Rice said. “We are really not expecting anything out of it because of everything that is going on.”

Maricopa Wells team competes to plan cities of the future

WASHINGTON — The team of students from Maricopa Wells Middle School in Washington this week for an engineering competition has a plan.