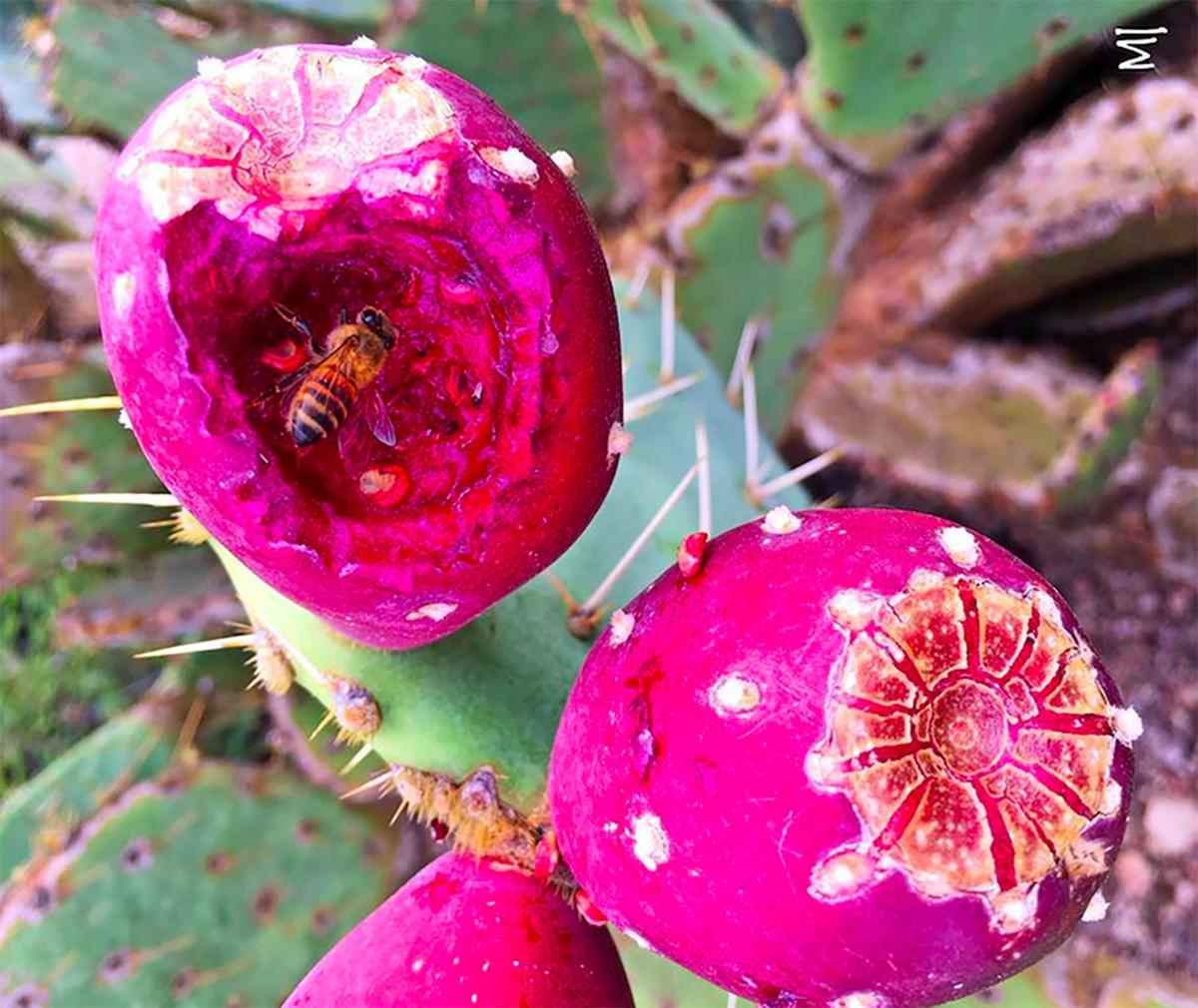 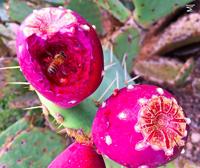 A bee drinks from prickly pear fruit in Tucson. The prickly pear cactus blooms during the summer in Arizona and is commonly harvested from the first week of August into September. 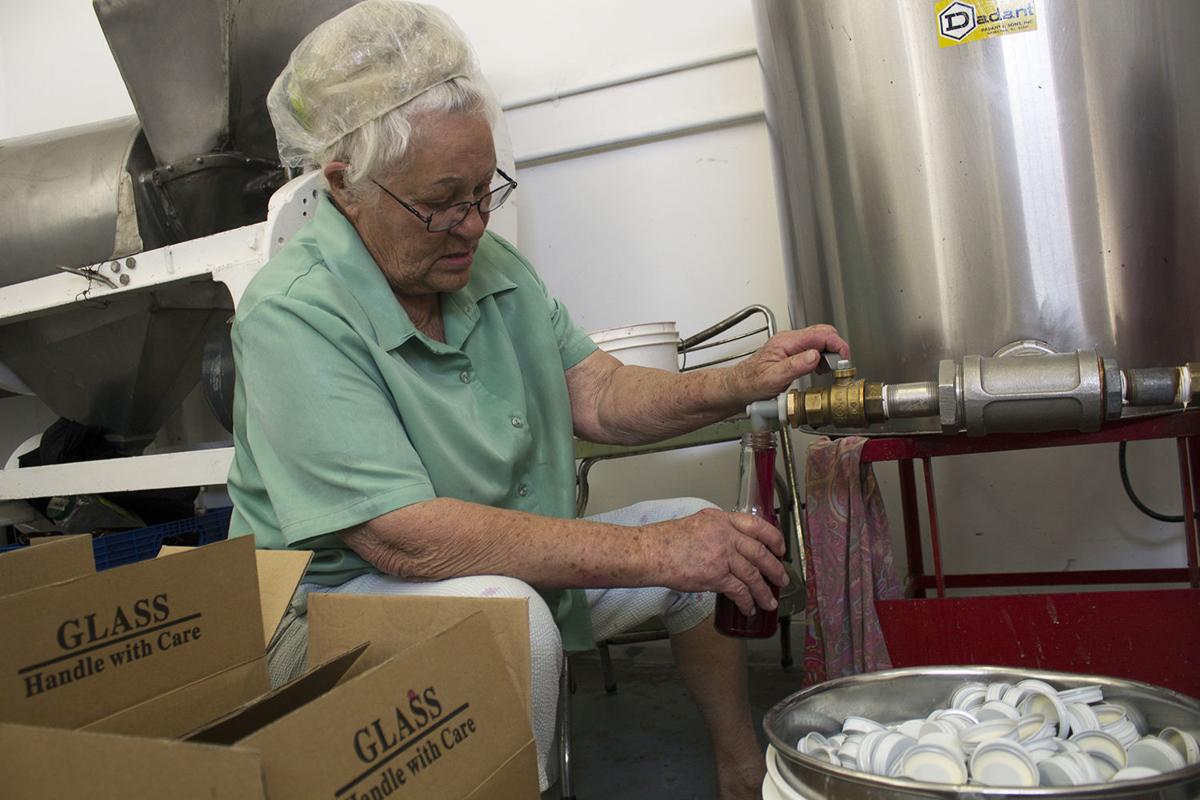 Natalie McGee bottles 100-percent pure prickly pear nectar as part of Arizona Cactus Ranch’s production stage in Tucson. Production is done once or twice a month to keep up with the number of orders. 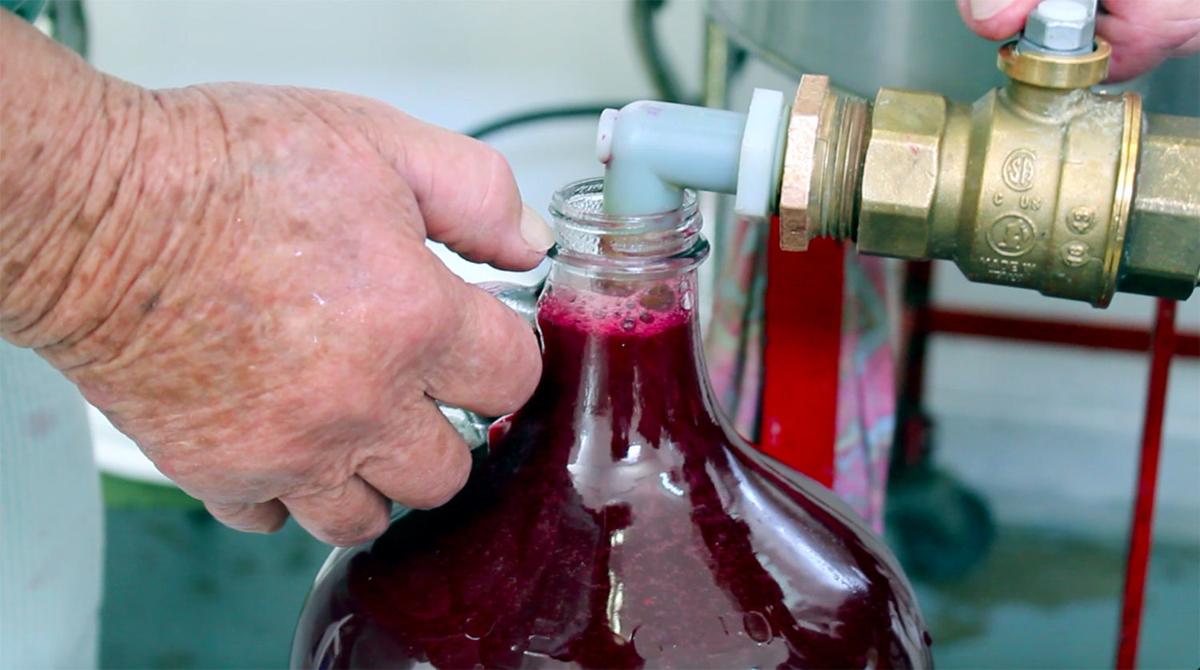 It pricks you in the hand if you touch it and gets stuck to the bottom of your shoe if you step on it.

But, if you learn to work around the painful exterior, the prickly pear cactus is one of the Sonoran Desert’s tastiest hidden treasures.

“It’s hard to believe that something so brilliant and bright comes from this plant in nature that grows in the desert,” said Mike Jones, a volunteer ranger at Saguaro National Park West.

As a volunteer ranger, Jones teaches a “Cooking with Prickly Pear” class for visitors and locals on how to harvest and make juice with the fruit. He also educates visitors about some of its other qualities and shares some cooking recipes.

These qualities are hard to miss during the summertime in Arizona. The Opuntia engelmannii, also known as the Engelmann prickly pear cactus, blooms bright yellow flowers and magenta colored fruit.

While different regions have learned to cook with other types of prickly pear cactus, the Engelmann is prominent in the Southwest.

“I like Englemann because first of all their easier to harvest from because they’re lower to the ground,” said Cheri Romanoski, founder of Cheri’s Desert Harvest. “They are extremely plentiful, the color is intense, and the flavor is delicious.”

Cheri’s Desert Harvest, based in Tucson, is one of the most prominent sources of all-natural products made from ingenious fruits and vegetables of the Sonoran Desert.

Cooking with the fruit, or tuna, of prickly pear cactus, is nothing new. The fruit has a dense history in the Southwest and northern Mexico. Just in the Tucson area, there is farming evidence that dates back 4,000 years, according to Romanoski.

“We know that the Native Americans used it not only as a food item but as a topical healing agent,” Romanoski said, “as well as they ingested it when they had indigestion or stomach ailments.”

Romanoski joked that instead of trying to compete with Smucker’s, she decided to work with what’s in her own backyard, and began producing products from fruits and vegetables that she grew.

“I introduced prickly pear to the community and they embraced it, and it has just grown exponentially every year from that point on,” Romanoski said.

At first, only her husband and three children had the pleasure of enjoying her preserves, but then her neighbors and friends got a taste, and by 1985 Cheri’s Desert Harvest was officially in business.

“The growth and sale of prickly pear products has just gone through the roof,” Romanoski said. “In the last 14 years, our retail sales of predominantly prickly pear has grown 590 percent.”

Think of any common, or not so common, recipes you know, and odds are you can add prickly pear to it. Romanoski sells syrup, jam, jelly, candies, and she has a large recipe list, including a watermelon salad, lemon cupcakes, margaritas and lemonade with prickly pear.

Romanoski isn’t the only one cooking up prickly pear recipes. She also sells her products to restaurants, breweries, distilleries, grocery stores, resorts and more. One of her many customers is Tucson’s Borderlands Brewing Company.

“We wanted to take a more proactive role in the community and one aspect of that is trying to use as many local ingredients as we can,” said Mike Mallozzi, co-founder of Borderlands.

Mallozzi said Arizona lacks the infrastructure to produce a lot of common beer ingredients, but the prickly pear is hyper-local and works well to make a fruited beer. The prickly pear wheat beer at Borderlands is made with Cheri’s Desert Harvest’s pasteurized juice.

“It is definitely one of our core brands,” Mallozzi said. “It has been a really great product. It’s a good example of what we’re all about.”

While natives of the Southwest may be familiar with prickly pear, the idea of eating or drinking a thorny cactus fruit is new and exciting for the other parts of the U.S. and around the world.

So why is the trend starting to heat up now?

Besides standing out on a menu, prickly pear fruit has many health benefits, research shows.

Just ask Natalie McGee, owner of Arizona Cactus Ranch, a local Tucson business that sells 100 percent pure, concentrated prickly pear nectar. McGee is 78, but she says she looks like 50 and feels like 20.

“I take this prickly pear every day. I don’t have high cholesterol and I don’t have any pain, inflammation, or swelling,” McGee said. “I feel absolutely wonderful every day. … I swear it’s making me younger.”

McGee’s business took off after she attended the Green Valley Country Fair in 1991. In between jobs, she went there to sell prickly pear jam and jellies, which she had been making on her family ranch in Green Valley since she was a kid.

The following week after the fair, McGee started getting phone calls from snowbirds who said their cholesterol and other health-related numbers had gone down after using her products.

“I didn’t know prickly pear could do anything for anybody except that it was pretty and had lots of stickers and that kind of thing,” McGee said.

The snowbirds asked McGee if she could start making more products without sugar or water —just the prickly pear concentrate. The phone has been ringing ever since, she said.

Arizona Cactus Ranch has loyal customers who continue to buy products because of their noticeable health improvements. McGee said she recently got a thank-you call from a long-time customer because she is no longer diabetic.

Every bottle of Arizona Cactus Ranch’s prickly pear concentrate is loaded with antioxidants, dietary fiber, electrolytes and more. McGee said her concentrate has been researched by many different organizations, including Stanford University.

“It’s a wonderful food that balances your whole body,” McGee said. “It balances everything, from your sugar to your cholesterol.”

This is just the beginning for prickly pear. Mallozzi said consumers want to know where their food and adult beverages are coming from, and they want them to be local, which is why the trend has picked up around Arizona.

However, prickly pear is sticking out around the nation and around the world. Big corporations such as Coca-Cola, Starbucks and Pellegrino have all announced products containing prickly pear.

“Prickly pear is becoming the super fruit of this new decade,” Romanoski said. “It’s become far more recognized because it’s noticed for its health benefits and gorgeous color, and it has such a historical base as well.”

Carly Oseran is a reporter for Arizona Sonora News, a service from the School of Journalism with the University of Arizona. Contact her at coseran@email.arizona.edu.