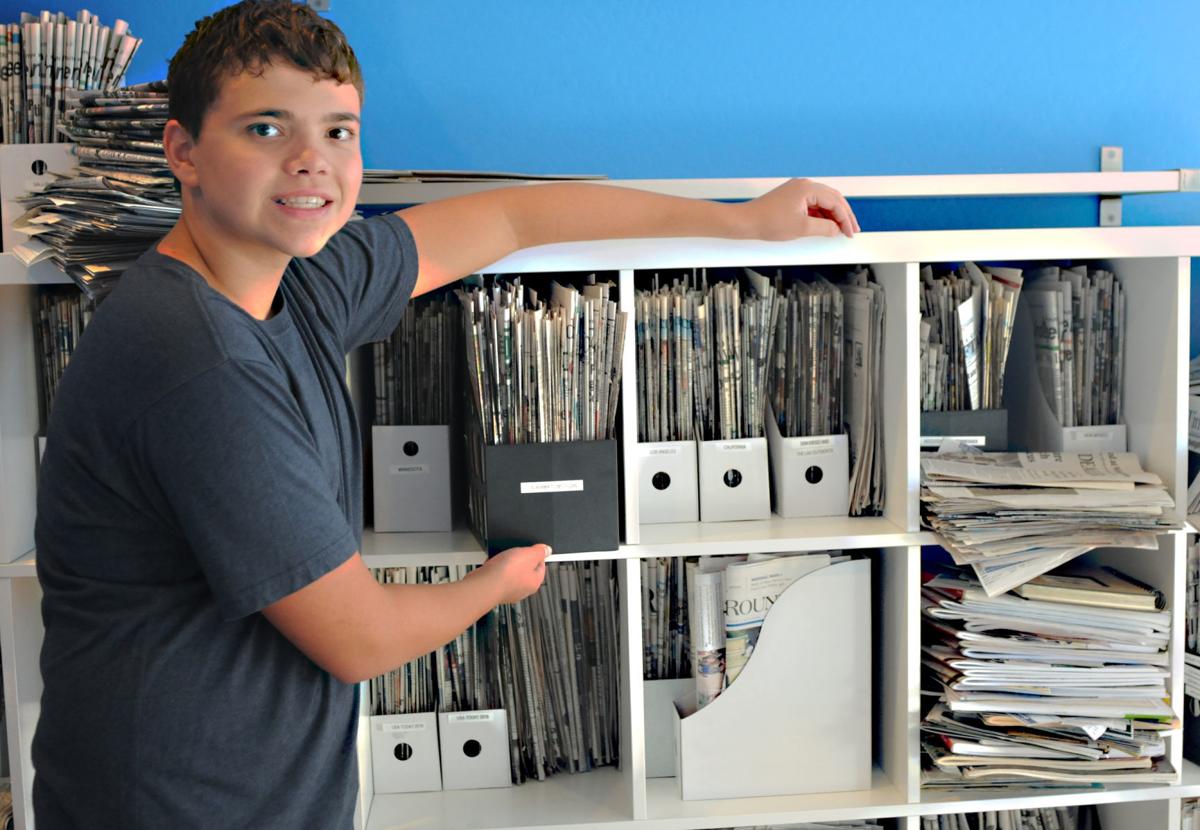 Tyler Davis, 14, of Queen Creek has organized and filed some 3,500 newspapers he’s collected from across the United States. He has collected some 5,000 in all. 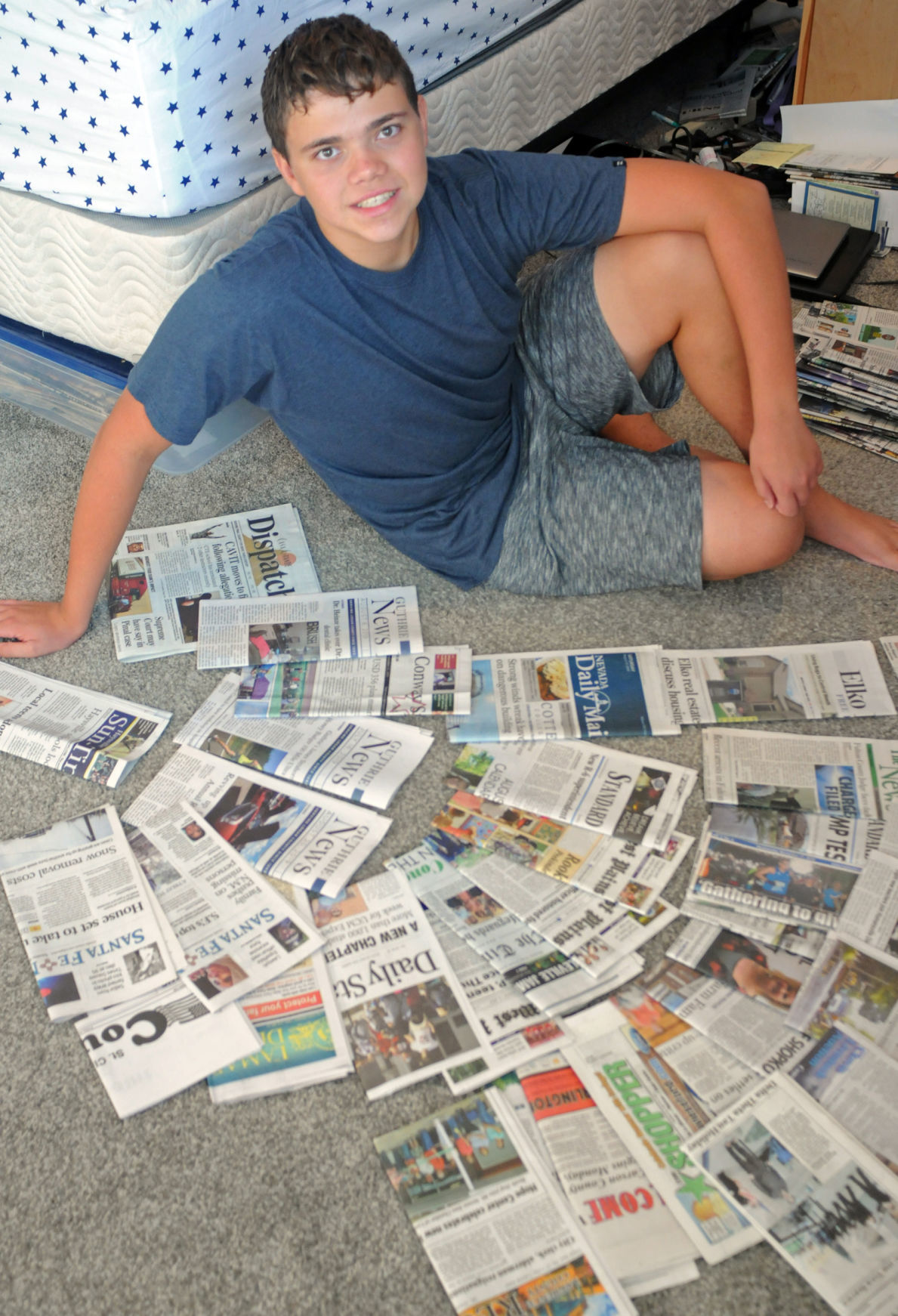 Tyler Davis, 14, of Queen Creek shows some of the newspapers he’s collected in travels with his father.

Tyler Davis, 14, of Queen Creek has organized and filed some 3,500 newspapers he’s collected from across the United States. He has collected some 5,000 in all.

Tyler Davis, 14, of Queen Creek shows some of the newspapers he’s collected in travels with his father.

QUEEN CREEK — Tyler Davis got into newspapers with the weather page. It took off from there.

“The weather was my introduction to it, yeah,” Tyler said.

I spoke to Tyler at his home in Queen Creek. His grandparents live a mile or so away. He’s 14. I’m sure he’s visited Maryann and David Mcfarlane many times. But Feb. 19, 2015, is significant. It was then he sat down with a copy of The Arizona Republic and turned to the weather page.

On his visits, he followed the weather from one day to the next.

Here was something different. Not at all like the internet. Every day offered something new. Tyler turned to the news articles. Again, a new day a new story.

The web? Things lingered. What was there one day was often there the next.

And there was the paper itself. It changed daily but had more heft. No clicking required.

“It’s something different to hold an actual newspaper, than just to scroll.”

And Tyler finds newspapers a more reliable source of news. Behind the words on the page are reporters actually talking to the newsmakers. Attending and reporting on public meetings. Keeping public servants on their toes. Drawing back the curtains to get to the truth.

Online, you might find a raft of stories on one topic, Tyler said, adding: “Which one is real?”

He’s got a point. A lot of rumor passes for truth on the internet. But websites tied to print newspapers are a good bet. Same reporters. Same editors.

Even so, Tyler admits he’s an outlier. He has friends. Some are on his swim team at Casteel High School in Queen Creek. Few of them read newspapers. Well, frankly, nobody Tyler could think of.

“That’s what most people like doing, but I mean he doesn’t hate newspapers either.”

But Tyler the outlier wanted to expand his newsprint horizons. He wanted to see what newspapers out of state had to offer. So in late 2015, he asked his father, Gregory, to bring back some papers from Los Angeles.

Gregory Davis was on a business trip. He’s a land planner. He has his own consulting company. He didn’t disappoint. He brought back copies of the Los Angeles Times and a copy of the Palm Springs Desert Sun.

Tyler was struck by the difference in coverage.

The Times had stories about LA, Southern California and California and the nation as a whole. The Desert Sun pretty much kept to local issues, Tyler said.

For Tyler, that was just a start. Things picked up when he began traveling with his father. Gregory buys and restores classic cars. It’s something of a side business. He flies to the seller’s city and drives the car back to Arizona.

With Tyler riding shotgun, they stop in at gas stations or grocery stores along the way. Sometimes a newspaper office. They pick up the town newspaper.

“On Labor Day weekend, we drove a car back from Dallas,” Tyler said. “I could probably rack up about 30 newspapers from all these small towns that I would never have gone to.”

So far Tyler’s taken a half-dozen road trips with his father. He’s learned about Guthrie, Oklahoma, from the Guthrie News and Santa Fe, New Mexico, from the New Mexican.

In a farming community in Kansas, he learned a new grain silo is a big deal.

“It’s a great way to just get a feel of the country,” Tyler said.

His father agrees. The planner in him sees lessons in how communities develop. Greater density led to more public transit in the East. In the West, where the car is king, cities are more spread out. Railroads helped determine distances between towns in Kansas.

A town center every 10 miles.

The search isn’t spur of the moment, Gregory said. Tyler needs to plan, call ahead and find who carries the town’s newspaper.

“Make a list of exit numbers and where we’re going to stop and the name of the town and the distance between towns,” Gregory said.

But Gregory adds: “I think it’s a great hobby. It helps him in sorting and learning to organize.”

The proof lies in the file boxes of newspapers on a shelf in Tyler’s bedroom. They’re organized by trip. The Dallas trip. The Philadelphia trip — and so on.

Tyler also learned that people like to see themselves in print. They buy the newspaper just for that. When he buys one, store clerks often ask him: “Are you in the newspaper?”

If he picks up the Tuesday Dispatch, he can say yes.

Sometimes a good prospect is too far out of the way. So Tyler will call and arrange to have a newspaper mailed. With The Ulysses News in Kansas, he’s gone a step further. He subscribed to the weekly. He’ll get it in the mail.

“We cover a lot of local news, like our sports events,” Derrick said.

A Ulysses teacher was nominated for Kansas teacher of the year. The paper recognizes students of the month. Reporters cover the school board and the city council. You want to know what’s going on in Ulysses, you pick up The News — in print.

The paper doesn’t have a website, though that’s about to change. The News is preparing to go online in a month or so, Derrick said.

Well, it is the digital age. That’s just not how Tyler plans to read The News.

He wants real news from a real paper. He’ll probably start with the weather.

Coates: Warming up to the idea of work I put off all summer

As the weather cools, I start running low on excuses.

Coates: With murder afoot, no time for the pulpit

Cindy and I are not just boomers. We’re streamers now. We cut the cable a few years ago. We …

Now is the time to take stock. Look out over the landscape and note this summer’s casualties.

Coates: I’m a big influencer, if you ask my dogs

I get my share of PR spam. Most of it goes right into the deleted file. But recently I gave …

Coates: Looking back on a counterculture 50 years past

Rabbit Mejia was headed out of town, on foot. It was the summer of 1969, and Mejia was looki…

Coates: Too little of a bad thing isn’t always good for you

In the mid-1980s, the newspaper I worked at started a wellness program. We saw a nurse. We g…

Coates: A household gallery drawn from a lifetime of brushstrokes