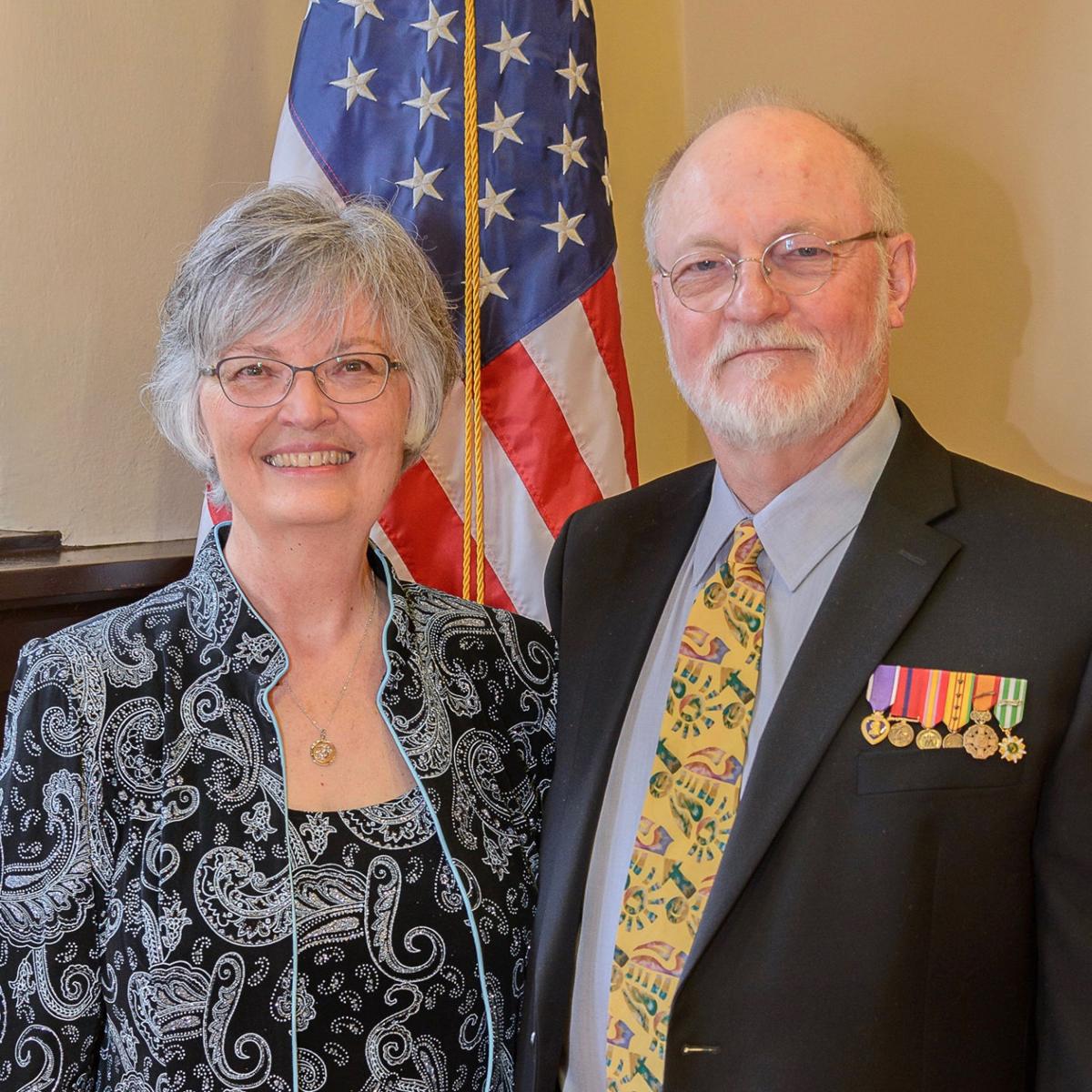 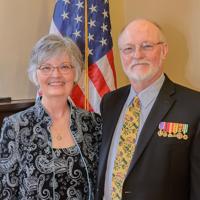 Betty and Ken Rodgers produced and directed “I Married the War.” 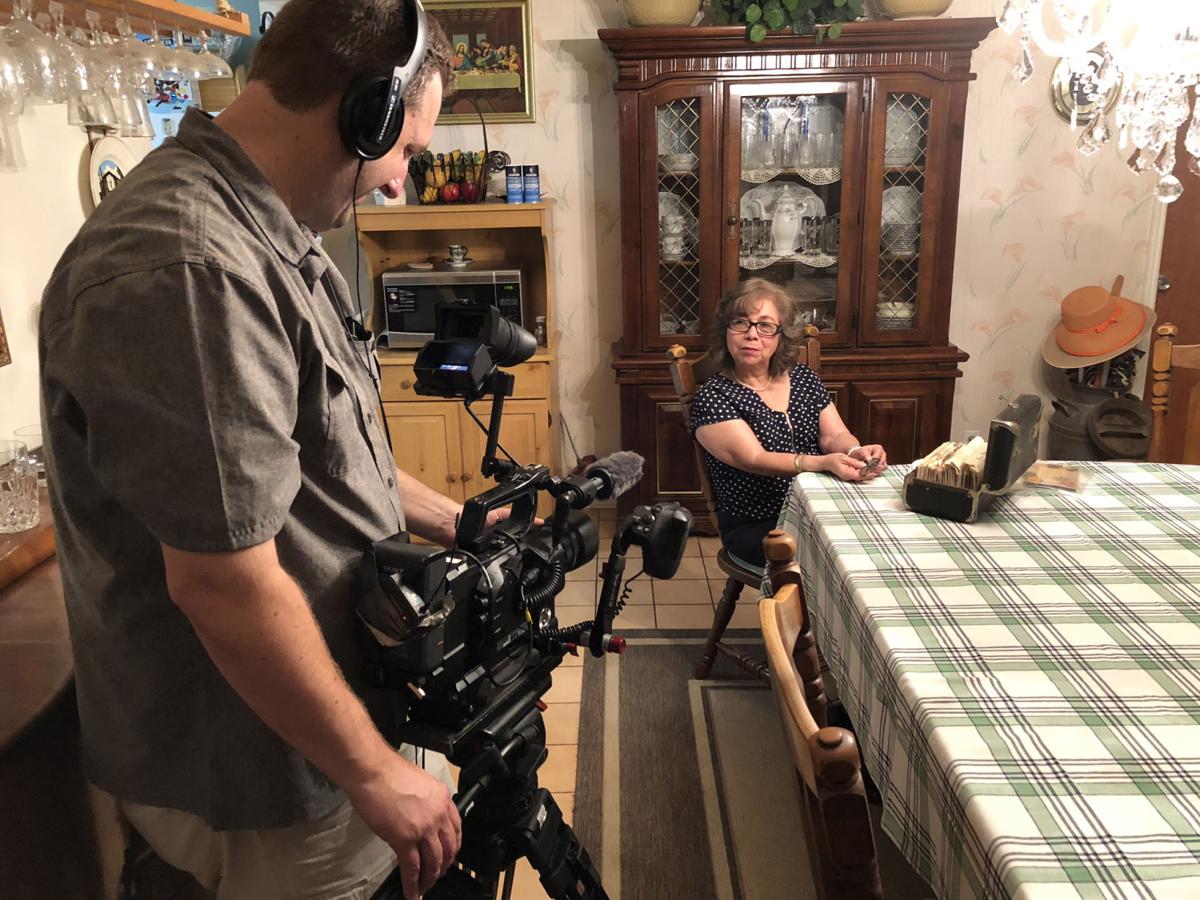 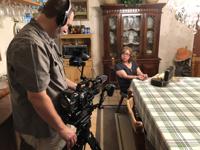 Cameraman Kevin Eslinger sets up for an interview with Sally Zepeda for “I Married the War.”

Betty and Ken Rodgers produced and directed “I Married the War.”

Cameraman Kevin Eslinger sets up for an interview with Sally Zepeda for “I Married the War.”

Both lived with it every day.

Robert couldn’t stop thinking about the war’s lasting toll, especially on Vietnam. He and Terri visited Vietnamese orphanages. And children scarred by the defoliant Agent Orange. They supported an orphanage for a year, sending $600 a month.

It wasn’t enough. The nightmares continued.

“He had so much guilt from Vietnam,” she said.

Terri shares her story in the documentary “I Married the War.”

His burden became hers. Maybe burden’s not the right word. It’s a sharing of all the injuries men bring home from war. From the physical to the emotional. From brain injuries to post-traumatic stress disorder.

Terri is one of 11 women interviewed for “I Married the War.” All wives of combat veterans. Their stories are personal. Each is different. But all tie into the idea that war isn’t left on the battlefield. It’s brought home.

And depicted in the moving film produced and directed by Betty and Ken Rodgers.

“I Married the War” isn’t quite a sequel to their first documentary, “Bravo! Common Men, Uncommon Valor.” It’s more of a natural progression.

The first film focused on the Battle of Khe Sanh. Marines in 1968 held off a 77-day siege by North Vietnamese troops. The movie put the battle front and center, with archival photos and footage, as well as ear-ringing explosions. Khe Sanh veterans spoke about the battle and its lasting effects.

Ken had a personal interest. He grew up in Casa Grande before joining the Marines. He was at Khe Sanh. He still carries shrapnel from a mortar explosion.

“Bravo!” won best documentary at the 2015 GI Film Festival in San Diego. Ken and Betty screened the film around the country, often at Marine Corps reunions. They kept in touch with Khe Sanh veterans.

The film’s editor, John Nutt, had a suggestion. Do a movie about the wives of the men in “Bravo!”

Nutt, a professional film editor, had come out of retirement to edit “Bravo!” He’s also a Vietnam veteran. He returned to edit “I Married the War.”

Betty would hear from other women: “You know the wives are Vietnam veterans, too.”

Betty and Ken took to the idea. But they went beyond Khe Sanh. And Vietnam. They interviewed wives of veterans from War World II, up through the wars in Iraq and Afghanistan.

The film deals with conflict beyond the battlefield. Conflict borne by returning soldiers. Conflict that tests marriages. And families.

“Anytime there’s conflict, some kind of relationship between humans,” Ken says, “there’s a story there.”

Terri Topmiller was their first interview, in late 2015. She lived near Betty and Ken in the Boise area of Idaho. Betty met her at a screening of “Bravo!”

“It was an instant friendship,” Betty said.

Terri agreed to sit for an interview. It wasn’t an easy decision. Once you see the film, you understand why.

She was one of four Boise-area women featured in the movie.

The Idaho public television station showed an interest in the project. And suggested a more diverse group might appeal to a wider audience. So Betty and Ken expanded their search.

They took their film crew to shoots in Texas, Indiana, Wisconsin, California and Atlanta. The movie became one of diversity in color and ethnicity, as well as geography. And in wars fought.

Gloria Jabaut lived in California. Her husband, Ron, served in the Navy. He returned from the Korean War a different man. He couldn’t stop washing his hands. He scrubbed until his fingernails came off.

She told him: “You have to talk to me about it. He just wouldn’t.”

Ron was a sonar operator on a destroyer. At Hungnam, Korea, he volunteered to help evacuate Marines who had fought their way out of a major Chinese assault. With heavy losses. He helped the injured board the ship. He carried the dead. His hand washing obsession followed.

“The name they put on it was PTSD,” Gloria said.

Precious Goodson’s husband, Leonard, came back from Afghanistan a broken man. He had PTSD, along with mild traumatic brain injury. TBI is the shorthand. He was easily angered and easily upset.

“If I closed the refrigerator door too hard, it would set him off,” Goodson said.

Precious never left his side. She completed her doctorate online, all the while helping Leonard out in any way she could. In one scene, she counts out pill after pill and blends them in a medical milkshake. All for Leonard.

Later we see Precious and Leonard walking their two dogs. A form of therapy, perhaps. I’d give the dogs credit. Betty and Ken do, at the end of the film.

Stacie Vaughan of Indiana recounted her husband’s flashbacks. At one point, Drew pinned her to the floor. He didn’t recognize her. She spoke his name calmly and firmly, over and over. “Drew, Drew …” He came out of it.

“I don’t know what he did in Iraq,” Stacie says.

She knows what it did to him. Still, she stayed with him and, as best she could, kept him grounded. You see them both later, strolling around Nashville, Indiana, enjoying the sights.

He’s a presence in the film. But he’s not interviewed. None of the husbands are. Nor does the film feature men married to women who fought in combat.

“I have a philosophy about these films,” Ken said. “Keep it simple. Keep the story simple.”

Having veterans tell their side would add all new storylines. New wrinkles. And complicate a film that had already generated 25 hours of unedited footage.

It was, of course, edited. Nutt did most of the work. Betty and Ken collaborated. Now each wife’s story runs about five or 10 minutes. Betty had thought about going on camera to tell hers. But it would have meant cutting into the time afforded the others. She decided against it.

Here’s what she told me.

She met Ken in 1984, 16 years after Khe Sanh. They both lived in Cloudcroft, New Mexico, high in the Sacramento Mountains. Betty helped to manage a resort. Ken was a regular.

They met in the bar, Ken said.

Not quite, according to Betty. Ken sought to make reservations for his parents. He didn’t have a credit card, though. Betty was called in to deal with it.

“I thought, well, we’ll give him one chance.”

Betty cited a quote from the film: “We just started talking and we’ve been talking ever since.”

In 2008, though, they both came to realize: Ken carried with him the baggage of war. PTSD. It explained mood swings and emotional flareups.

It was something they both had to acknowledge and work through.

I viewed the film at home, something of a private screening.

I wondered afterward, where would these veterans be without the wives? The women not only absorbed the pain. They kept them grounded. Kept them from spinning out of control. In some cases, kept them alive.

Ken recalled the interview with Sally Zepeda. She lives with her husband, Luis, on their mini-ranch in Hondo, Texas. A Vietnam veteran, he developed cancer attributed to Agent Orange. He began radiation and chemo-therapy.

At some point, he decided it wasn’t worth it. He told Sally he was ending his treatment.

Sally said she would not let that happen. She was telling us that. We could see her telling her husband, “I won’t let you die.” He completed his treatment. The next scene shows the two on a walk through the ranch. Luis is very much alive.

Not all stories end well.

Terri Topmiller’s husband took his own life, 40 years after Khe Sanh. He couldn’t shake the guilt. He carried with him what psychologists now recognize as moral injury.

I asked Betty what she would say, if she sat for the camera.

She answered as a filmmaker, not a subject.

“This is what happens when we ask people to go to war, and it’s something that hasn’t been talked about. It’s something that is not known about the true impact of the ripple effect, that they do bring the war home with them.”

“I Married the War” has yet to be released. Betty and Ken are entering it in film festivals. They might need to trim another few minutes for a possible TV market. A new trailer is planned.

Getting it across the finish line, they say, will take more money. You can donate at imarriedthewar.com.

Coates: How to be first in line for a COVID shot: Grow old

February was a big month for health care.

Coates: 10 years of interviews at the diner down the street

CASA GRANDE — I hired on with the Dispatch in the summer of 2010. My job was to write featur…

Coates: Dressing for the pandemic with comfort in mind

I’ve settled on my pandemic wardrobe. It’s not new, actually. It’s pretty much the same ward…

I was lucky to land in a job I could handle with some competency. And one I like. Writing fo…

CASA GRANDE — Jim Dalton had a layover at Union Station in St. Louis. It was December 1943, well into World War II. Dalton, 18, was a sailor o…