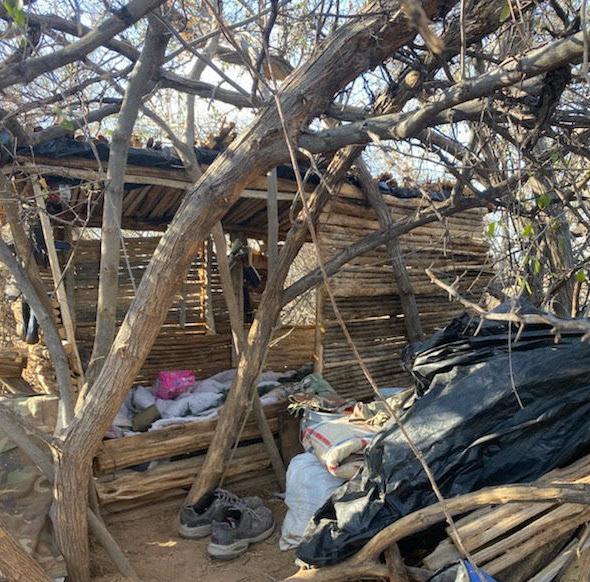 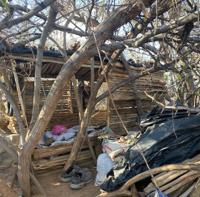 A man wanted on suspicion of child sexual abuse eluded law enforcement officers for 107 days by hiding out in the desert and living in this shelter.

The Pinal County Sheriff’s Office with the help of the U.S. Border Patrol and Arizona Department of Public Safety troopers were able to catch a man who was hiding out in the desert to avoid being arrested on suspicion of child sexual abuse.

FLORENCE — A man labeled as a survivalist spent 107 days in the desert trying to evade law enforcement officers who were seeking him on suspicion of child sexual abuse.

Pinal County Sheriff’s deputies, with the help of the U.S. Border Patrol and Arizona Department of Public Safety troopers, were able to take David Whitaker, 42, of an area known as Missile Base near Marana, into custody on March 15 after finding him living in a shack he had constructed in the desert. He was arrested on suspicion of sexual conduct with a minor, sexual abuse and indecent exposure.

“Law enforcement truly is a team effort,” said Sheriff Mark Lamb. “We are hopeful his arrest brings the victim and the victim’s family some peace of mind.”

On Nov. 28, deputies received a report that Whitaker allegedly had sexual contact with a 13-year-old. The teen allegedly told deputies that the abuse had been ongoing, according to PCSO.

While deputies were en route to his home, Whitaker allegedly left the home and walked into the desert armed with a handgun. Deputies were notified that Whitaker is known to be a “survivalist” and had the skills to live “off the grid” without detection.

Deputies searched the area over the next several weeks with the help of DPS and U.S. Border Patrol. Earlier this month a DPS detective in the area received information about Whitaker’s possible location.

Whitaker was spotted through binoculars about half a mile northwest of Missile Base Road and DPS was able to establish a perimeter around Whitaker with the aid of a U.S. Border Patrol plane. Law enforcement officers were then able to take Whitaker into custody near the shack he had constructed. The shack included a bed and roof. He had been living off of fish he caught in a nearby canal and hunting javelina and rabbits.

Missile Base is an unincorporated area around a former underground nuclear missile silo site east of Picacho Peak, near State Route 79 and Panther Butte Road in southern Pinal County. The Central Arizona Project aqueduct is also in the area.