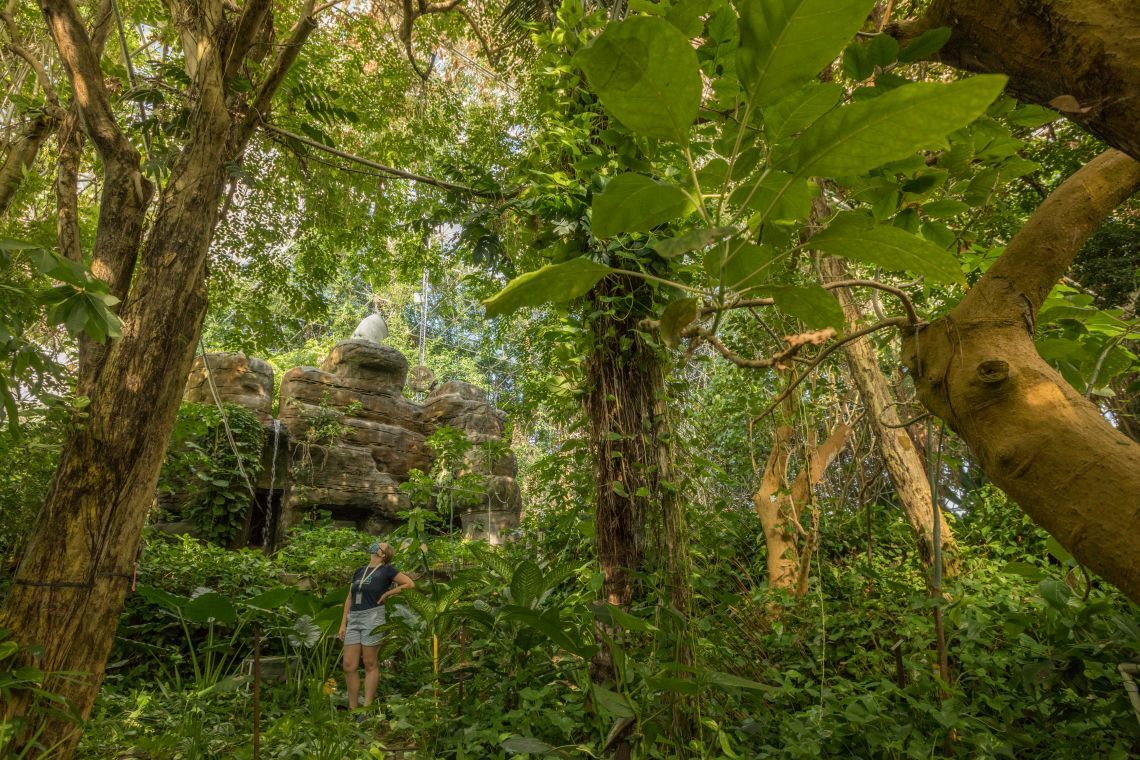 A member of an international team studies the rainforest habitat at UA’s Biosphere 2 in Pinal County. 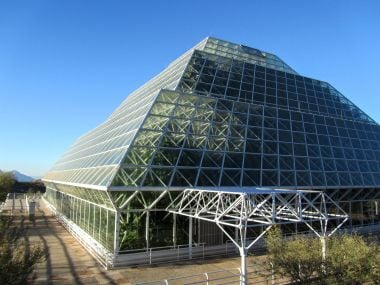 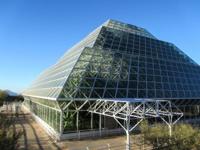 Enclosed under a dome of steel and glass, the rainforest biome at UA’s Biosphere 2 in Pinal County is most likely the world’s hottest tropical forest. Here, researchers can control environmental conditions that would be impossible to control in natural forests, providing answers to long-standing scientific questions. 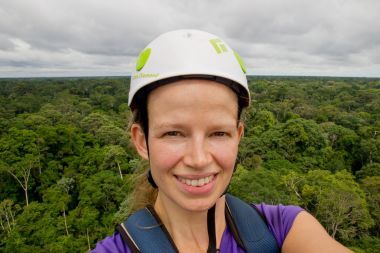 The paper's first author, Marielle Smith, at the top of the 200 foot tall eddy flux tower at the K67 site in the Tapajós National Forest, Brazilian Amazon. 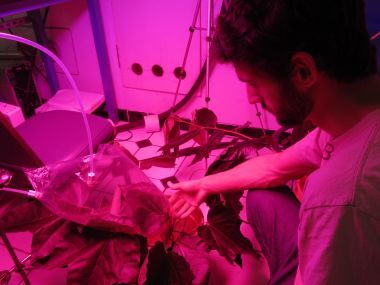 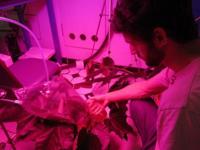 Tyeen Taylor, the paper’s second author, measures volatile organic compound emissions from leaves of Biosphere 2 tropical forest trees, a characteristic that may have contributed to high thermal tolerance of some species in this biome. Study published in 2018 in New Phytologist. 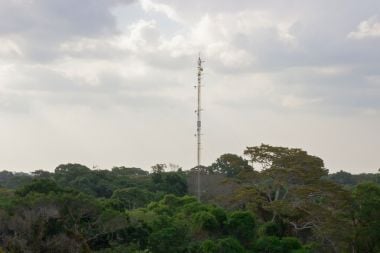 Eddy flux towers reaching above the canopy of the surrounding tropical forest at several locations allow researchers to measure the exchange of carbon dioxide between the forests and the atmosphere.

The results could help make climate prediction models more accurate, according to the authors — an international team led by scientists in the University of Arizona Department of Ecology and Evolutionary Biology.

At Biosphere 2, when the effects of warming and drying were separated, the authors observed that, just as in natural forests, photosynthesis declined as the air dried, but when the air was wet, the trees continued to photosynthesize steadily at ever higher temperatures, right up to a forest-roasting 38 C.

“No previous studies of tropical forests looked at changes in temperature much beyond to what they experience today,” said Scott Saleska, a professor in the UA Department of Ecology and Evolutionary Biology and senior author of the paper. “Biosphere 2 gave us a unique opportunity to look at what might happen when these forests get the full global warming treatment.”

The paper’s lead author, Marielle Smith — a postdoctoral research associate at Michigan State University who pursued the research while she was a doctoral student in Saleska’s lab at UA — noted that “previous studies suggest that tropical forests are already approaching the limit of what they can tolerate in terms of temperature, provoking concern about the impacts of future warming.”

“But when we looked at the rainforest in Biosphere 2, we saw that, under some conditions, the trees there were functioning well beyond temperatures currently deemed to be the limit, and even higher than those predicted for the Amazon basin by 2100,” she said.

Smith and her co-authors wanted to know why. Biologists have long known that plants’ ability to actively conduct photosynthesis, or turn carbon dioxide and water into biomolecules using sunlight, declines above a certain temperature threshold. However, the reason for this limit is not always clear.

That is because as temperature increases, the relative humidity goes down, and photosynthesis can decline due to the temperature increase, the decline in water content or both. Similar to an assembly line in a factory, where productivity could be affected by a shortage of supplies entering the production process or by an excessively hot working environment directly impacting the physical performance of workers, the productivity of forests could be limited by a shortage of raw materials — in this case, atmospheric water vapor, or humidity — or by high temperatures wreaking havoc with the biochemical machinery itself.

Understanding the reason for photosynthetic decline at higher temperatures is important because while the latter mechanism — direct susceptibility to temperature — would imply that tropical forests are highly vulnerable to future warming trends, the former would indicate some degree of resilience, especially under future elevated levels of carbon dioxide.

The problem is that in the natural world, higher temperatures and lower water content almost always go hand-in-hand, so their effects cannot easily be separated. In Biosphere 2, however, the climate can be adjusted in ways not possible in the natural world.

“The enclosed environment at Biosphere 2 allowed us to maintain high humidity despite high temperatures by adding water vapor via misters and trapping humidity inside the glass enclosure, which is something that would not happen in a natural tropical forest,” Smith explained.

This finding can be understood in terms of basic plant behavior: When there is less moisture in the air, plants react by limiting the opening of their stomata — microscopically small openings in their leaves — to take in carbon dioxide, one of the raw materials for synthesis. The longer the stomata remain open, the more carbon dioxide can enter the leaf, but that comes at a price: The drier the air surrounding the plant, the more water escapes through the openings, forcing the plant to strike a balance between carbon uptake and water loss.

To assess the sensitivity of tropical forests to future warming, the authors compared the response of photosynthesis to high temperatures in the Biosphere 2 tropical forest to that of natural tropical forest sites in Mexico and in the Brazilian Amazon. So-called eddy flux towers reaching up to nearly 200 feet high, taller than the forest canopy, allow researchers to measure the exchange of carbon dioxide between the forests and the atmosphere.

“Flux towers allow us to measure the exchange of carbon dioxide between the forests and the atmosphere that we used to calculate total forest photosynthesis,” Smith said. “When we looked very closely at the flux tower data, we could tell that it was the same mechanism that was causing declines in real-world photosynthesis during warm periods as in Biosphere 2; it was the decline in water vapor, not the increase in temperature.”

“We interpret these findings such that in the presence of high humidity, the stomata in the leaves can remain open longer without losing as much water,” said Tyeen Taylor, a co-author of the paper and postdoctoral research associate at the University of Michigan.

The authors discuss how heightened carbon dioxide in the atmosphere has the potential to have the same effect, because when more carbon dioxide is available, plants can keep their stomata opening times shorter, too, thereby limiting their water loss.

The authors pointed out that Amazon forests are facing great threats from fires, deforestation and habitat destruction, and while the study may point to some resilience to coping with a warming world, “that hardly means these forests are safe, any more than slowing down as you run a red light is safe,” Saleska said.

“We are already headed deep into the tropical forest danger zone, and if we don’t mend our ways, in terms of reducing both fossil fuel emission and especially large-scale fires and increased deforestation rates, the fate of these forests will be grim indeed,” he said. “What this study implies, instead, is the good news that we may still have a chance, if we act now, to save these valuable tropical forests.”

Daniel Stolte is a writer for University Communications at the University of Arizona.