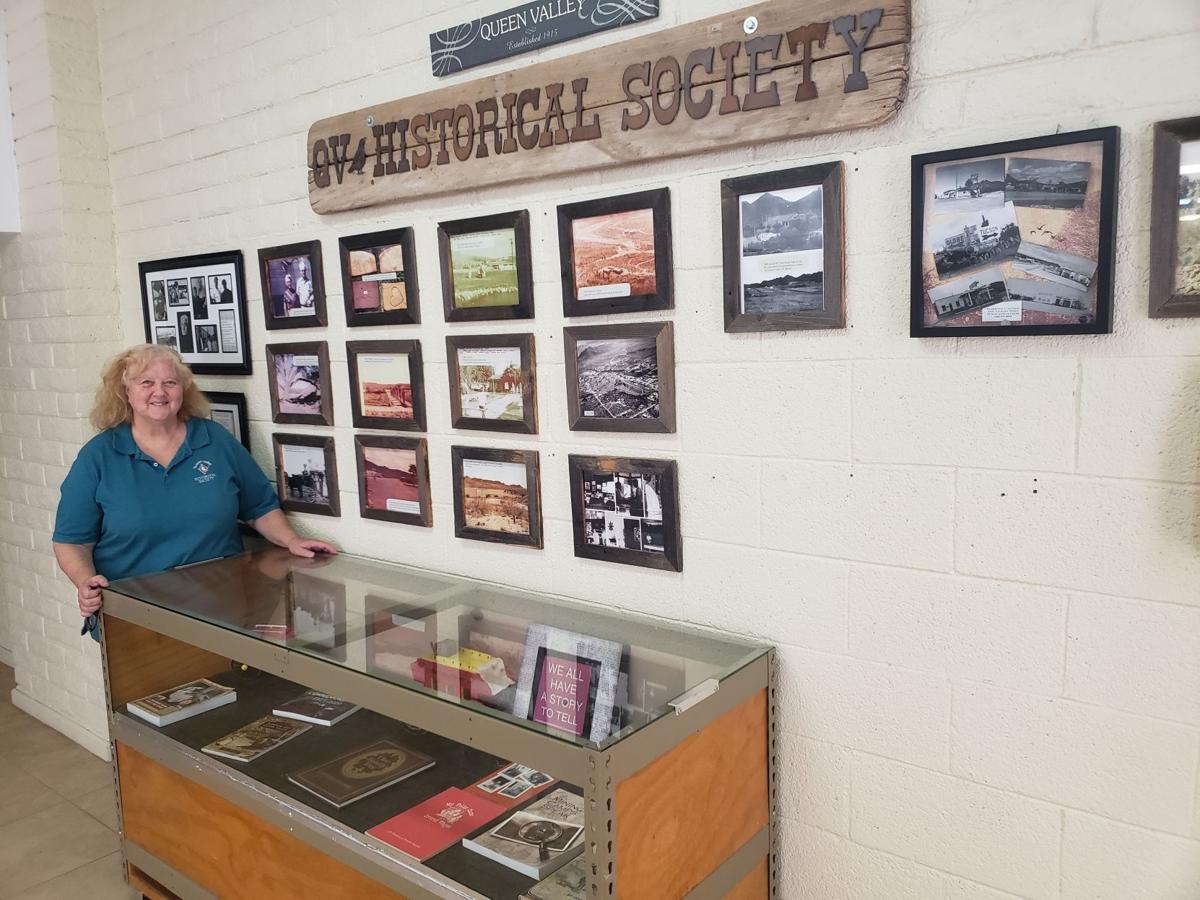 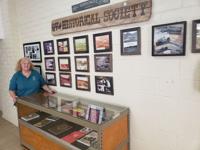 Carol Schumacher has been president of the Queen Valley Historical Society since 2010. 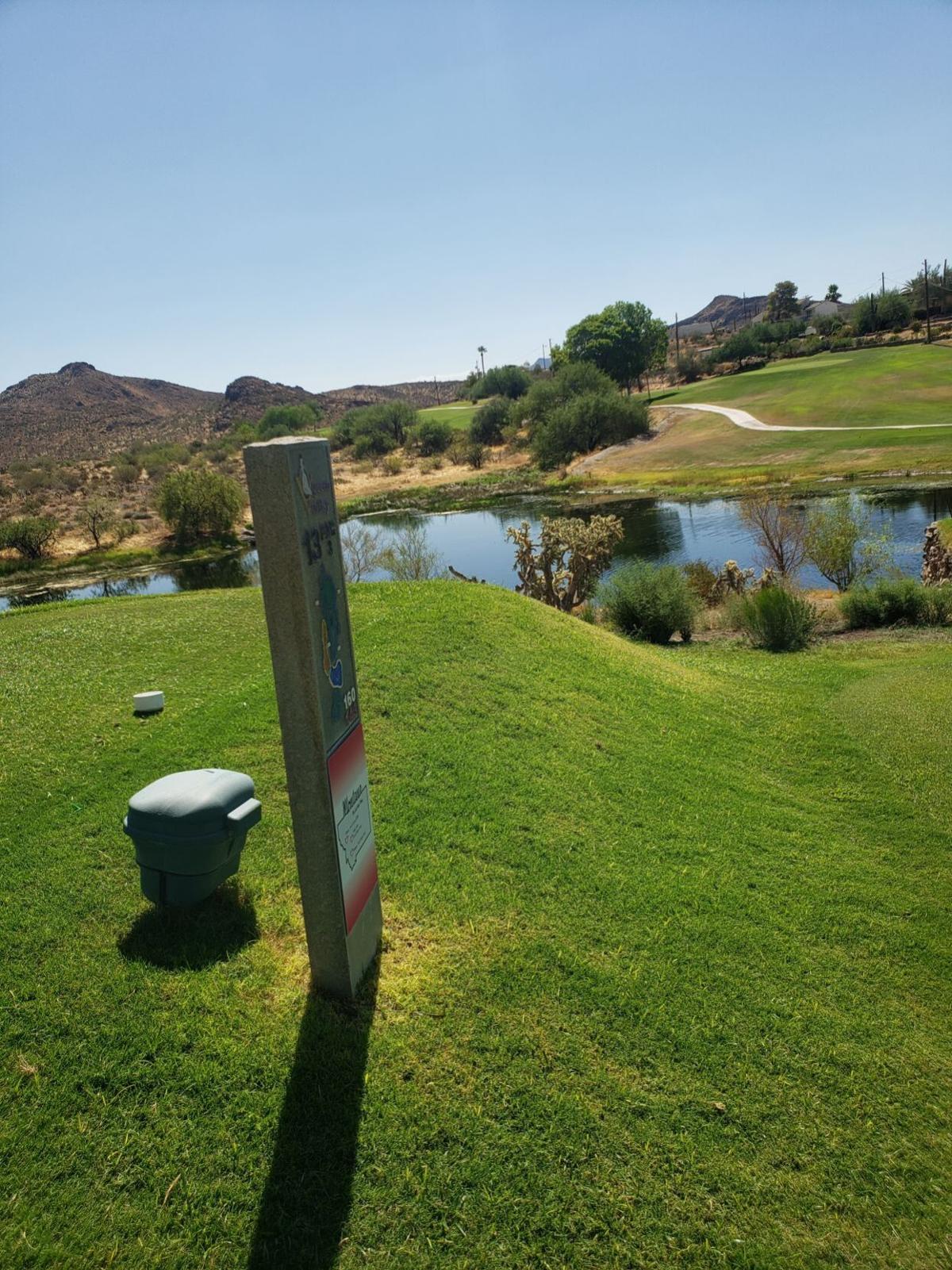 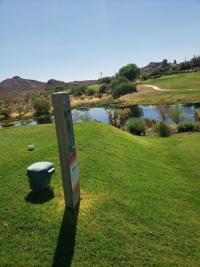 View from the 13th hole at the Queen Valley Golf Club, which opened in 1962. 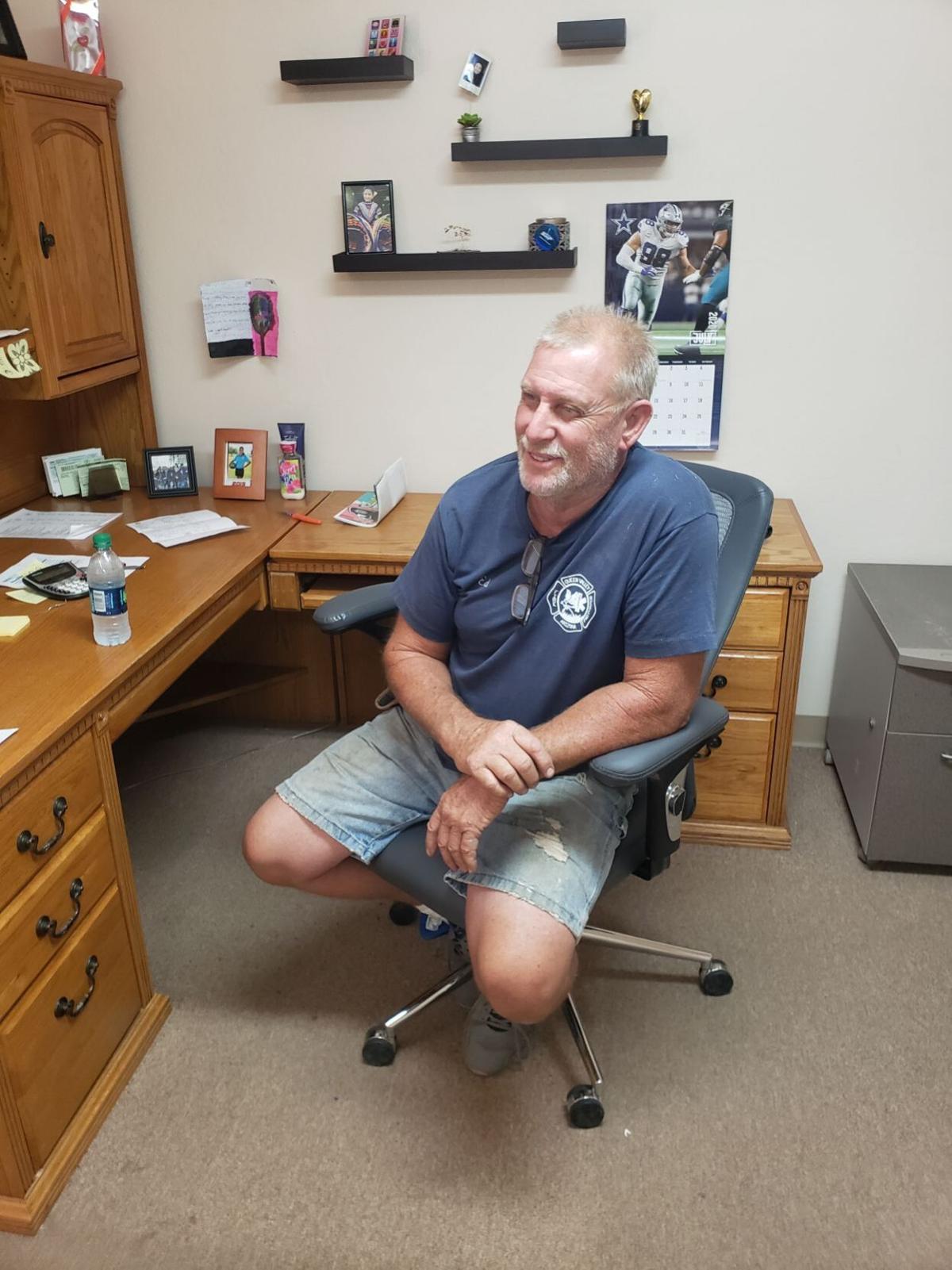 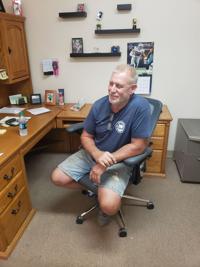 Eddie Chenoweth is a longtime employee of the Queen Valley Water and Fire departments. 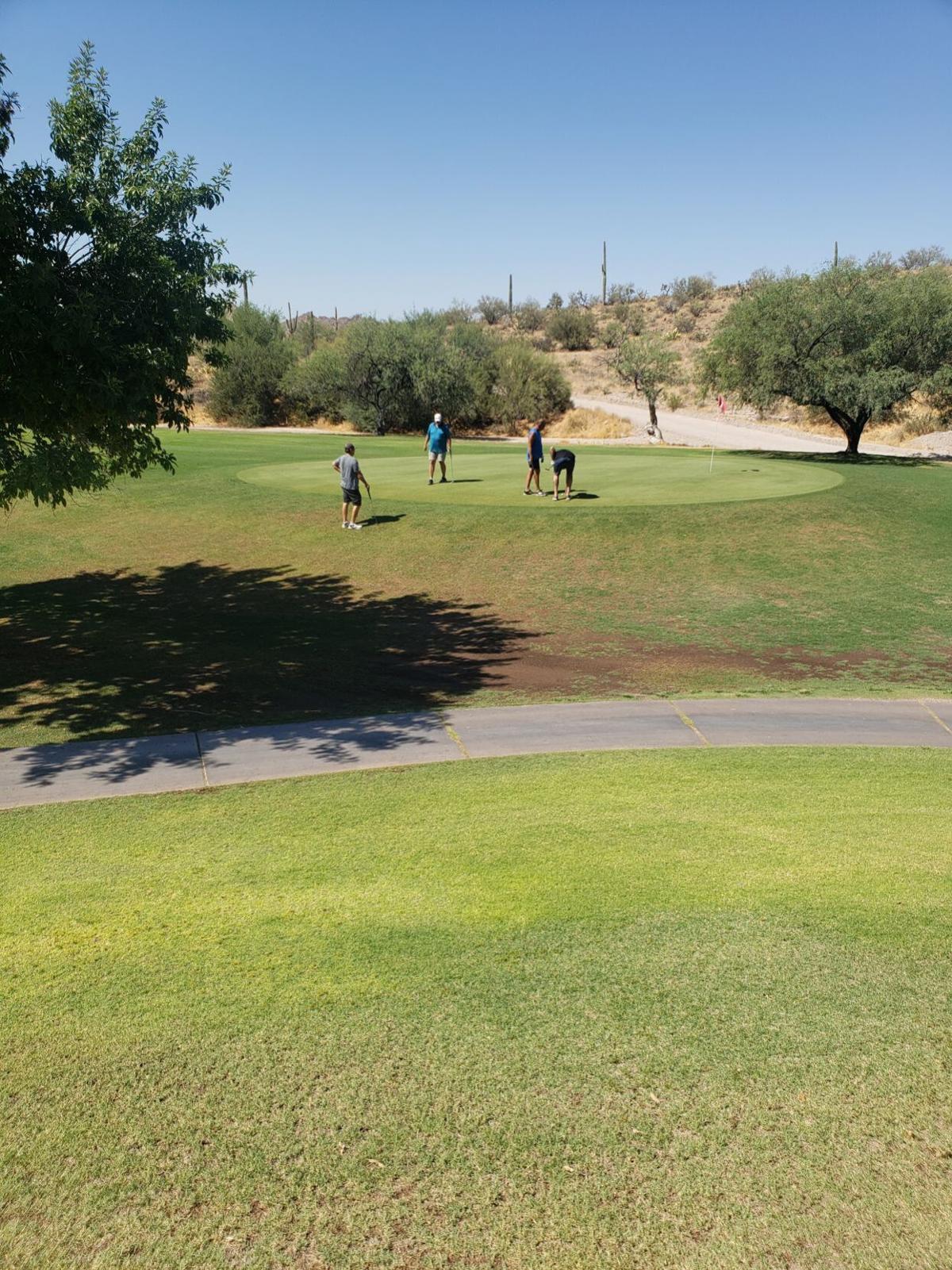 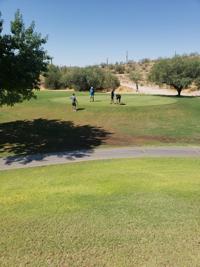 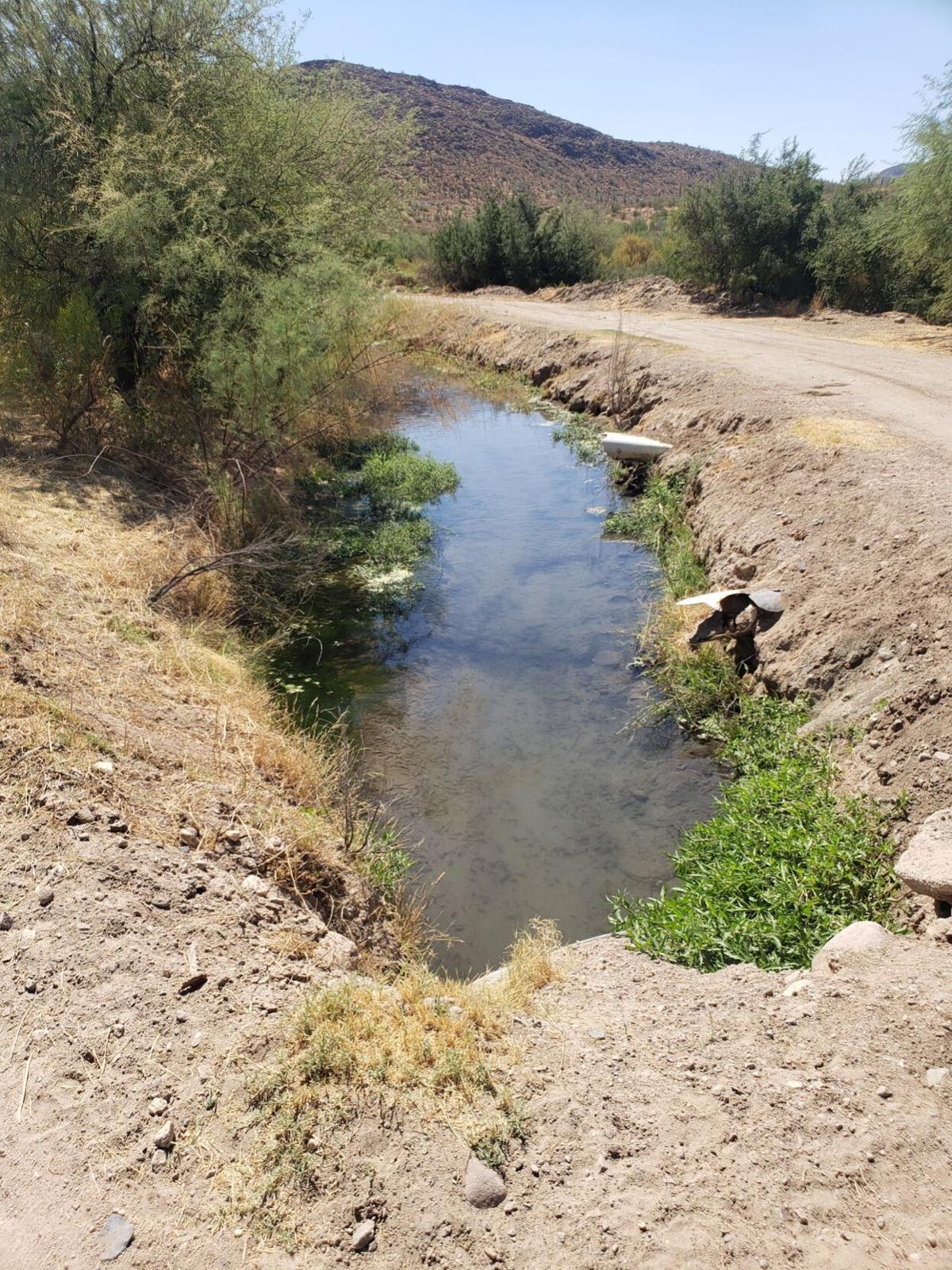 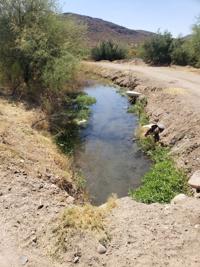 A canal below Whitlow Dam in Queen Valley is a popular area for dog walking, bicyclists and birders who see plenty of blue heron and egrets. 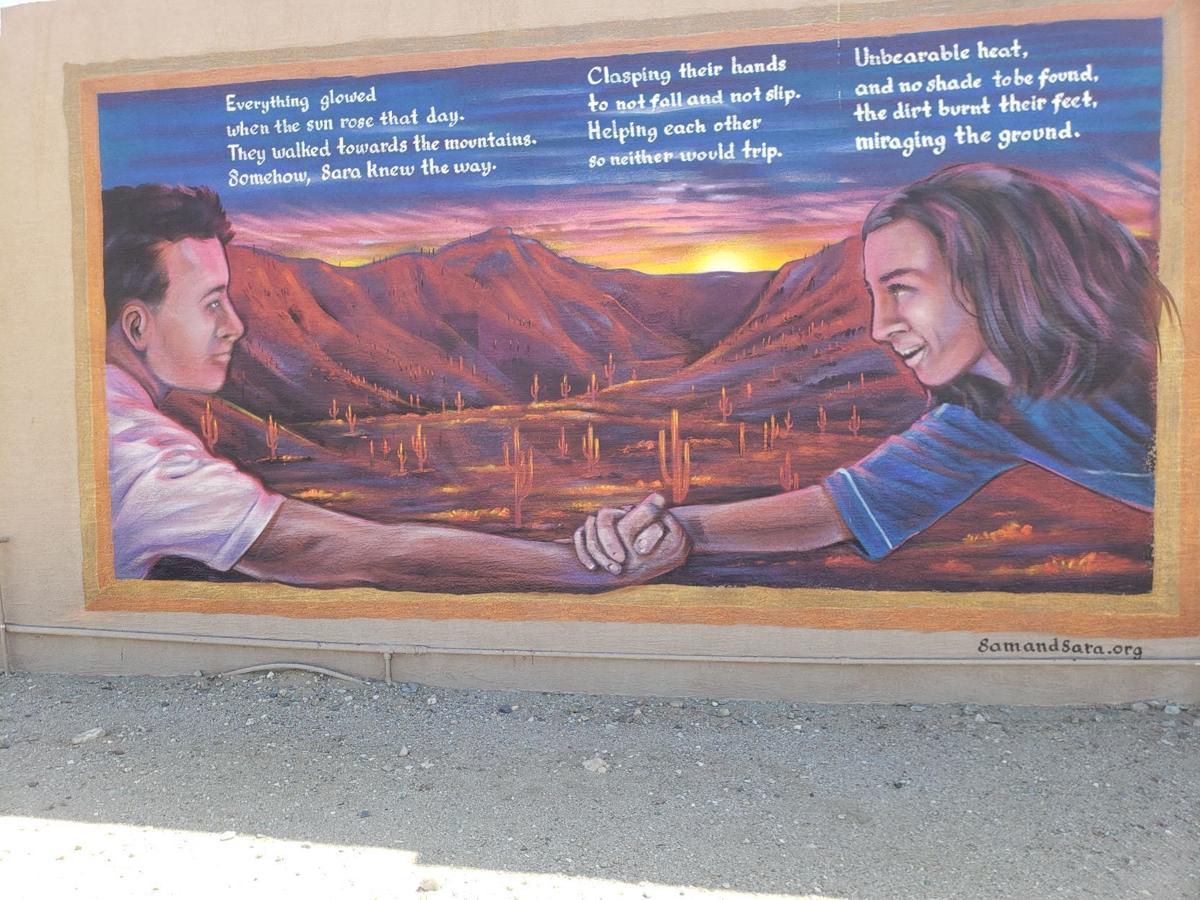 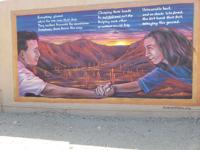 A mural painted outside the Queen Valley recreation center, meeting hall and quilt and poker clubs is part of muralist Isaac Caruso's series in a children's book of street art in Arizona. It was completed in February. 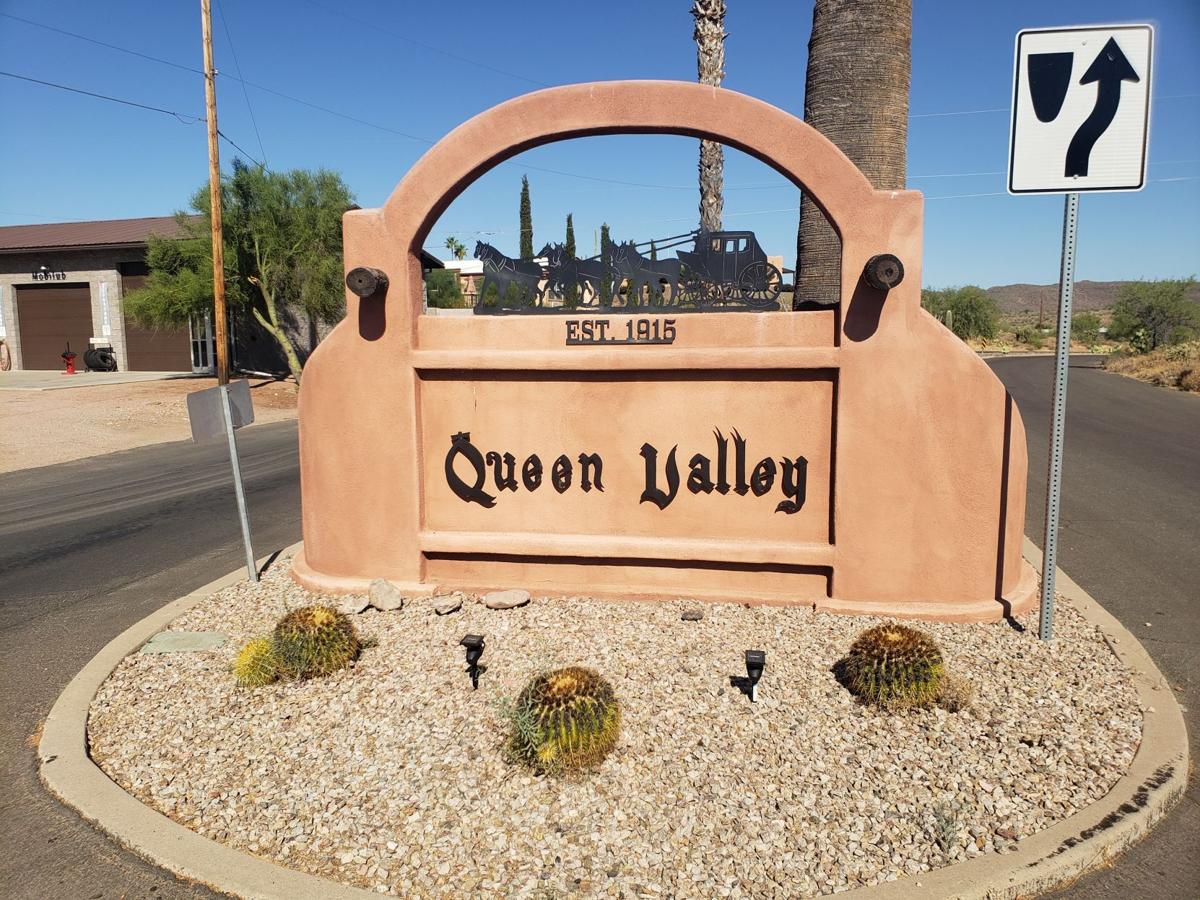 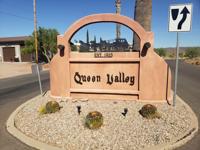 Carol Schumacher has been president of the Queen Valley Historical Society since 2010.

View from the 13th hole at the Queen Valley Golf Club, which opened in 1962.

Eddie Chenoweth is a longtime employee of the Queen Valley Water and Fire departments.

A canal below Whitlow Dam in Queen Valley is a popular area for dog walking, bicyclists and birders who see plenty of blue heron and egrets.

A mural painted outside the Queen Valley recreation center, meeting hall and quilt and poker clubs is part of muralist Isaac Caruso's series in a children's book of street art in Arizona. It was completed in February.

QUEEN VALLEY -- This winter-haven community mostly for retirees in upper northern Pinal County certainly has a flavour for British royalty.

“It’s a unique little town. It’s a treasure in many ways,” said Eddie Chenoweth, a 56-year resident of Queen Valley, which is just 15 miles west of his hometown of Superior and at the feet of the Superstition Mountains.

The community took its moniker from the stream, Queen Creek, that runs through the heart of the 9.62-square mile unincorporated town as it winds down roughly from Miami to south Chandler.

“I also think (the developer) named it after the queen. Almost every street name in this town is a woman’s name,” said Carol Schumacher, a local author and president of the Queen Valley Historical Society.

With only one pub in town, and seasonal at that, Queen Valley is similar to an English hamlet in no other respects, actually. The 18-hole membership-run links are plush green, with only a few water hazards, wind-free mostly and crawling with rattlesnakes and other desert varmints. American pioneers found the Queen Valley-Superior farming and mining corridor in the 1870s and it was soon dubbed the Jewel of the Desert, or Jewel of the Sonoran, punctuated by completion of Whitlow Dam in 1962.

Queen Valley also is special for its proximity to the Tonto National Forest and its hiking, camping and recreational opportunities. In fact, the forest and U.S. Bureau of Land Management land practically surround Queen Valley, which has an elevation of 2,039 feet. With that, however, comes living in a wildfire danger zone, particularly when the temperatures start climbing.

This year the Sawtooth Fire burned more than 24,000 acres of Tonto Forest land, but last year the Woodbury Fire scorched over 123,000 acres. Queen Valley residents can feel the heat, see the heat of these annual blazes but have not been forced to evacuate their homes, although they are always prepared to receive those orders.

“It’s getting a little scary,” Schumacher said. “Many of us are on the reverse 911 call to the county to where if there were a fire they would call into our house and report that we need to evacuate. We have a little box packed with things that are most precious to us so we can get out of the house if we need to.”

What has Schumacher and many in Queen Valley even more concerned, and angry, is how wildfires often are created and officials’ response to the situation. While the Sawtooth Fire was started by a lightning strike, last year’s much larger fire, the Woodbury, could have been avoidable if not for shooting enthusiasts, Schumacher believes.

“Here’s the thing about the Woodbury Fire: In the four weeks before the Woodbury, three other fires had started, little ones, behind the dam, and they all were man-made and they were from target shooters back there. It’s multiple-use land, and I don’t have a problem with that if there was a better setup and if people were more responsible.”

“The problem is people bring big, high-powered equipment out and they strike a rock and it sparks and, poof, we’ve got a fire on our hands. More importantly, they bring out incendiary rounds. Last summer we had three fires in four weeks.”

Schumacher explains she is not anti-hunting, but she does want those types of recreational visitors to use more caution and respect the land even if the National Forest Service allows target shooting and firearm practice.

“It’s not like we’re trying to stop all the shooting. We’ve got a lot of people in this town that are sportsmen, that are hunters, that are target shooters. We’d like some kind of method of it being a little bit more responsible and the people themselves being more responsible. The last two summers the Tonto National Forest has come out and blocked off the road, shut down during fire season. They shut the whole road (Hewitt Station Road) down because of people coming out and starting fires.”

Golf is another form of recreation in Queen Valley, and Schumacher believes the Queen Valley Golf Course, which opened in 1962 and makes it among the state’s oldest existing courses, is a primary factor for the community’s longevity. The clubhouse dates to the valley’s first homesteader, Hart Mullins, who arrived in 1915, and part of his family’s stone house stands today as one of the clubhouses’s walls.

“Without that golf course a lot of this town probably wouldn’t have developed or existed,” said Schumacher, author of two books about Queen Valley’s history and residents. “I really think in the ’60s when the homesteaders left, had a developer (Pete Allen) not been putting in a golf course, the town may have dried up and blown away.

“Even now, the social center of the town is that golf course. Certainly the Fire Department has a lot of influence on what we do in the town. Most of the activities we do are fundraisers for the Fire Department. That’s the biggest thing we do here.”

Below Whitlow Dam is a mini-riparian canal area and a parallel biking and walking trail inhabited by 62 species of birds, including blue herons and egrets, and the occasional javelina. “It’s a birder’s paradise,” Schumacher said.

Queen Valley celebrated its centennial five years ago even though Charles Whitlow, the first settler, at least American, came in the 1870s and started a ranch. But Whitlow left, and by 1915 Mullins came along and opened a dairy — or milk farm as he called it — and built a name for himself by transporting fruit, vegetables, milk and other dairy products to Florence and Superior. So today’s Queen Valley chooses to honor him.

“He had an orchard. He raised all kinds of citrus and avocados and he had a lot of what we could call truck-farm vegetables,” Schumacher said. “He would go up to Superior in his wagon pulled by mules and deliver produce and fruit and take orders and bring back orders the next week. He had cattle, but it was for his own use. He didn’t sell cattle for consumption.”

Mullins, wife Margaret and six children lived in Queen Valley until the Mullinses retired to Superior in 1959 after selling the property rights to the developer Allen. Some 60 years later the town has 1,500 residents, with 300 to 500 toughing out the conditions year-round.

“It’s a very close-knit community. We have two churches,” a Lutheran and a non-denominational “that accepts all walks of life,” Schumacher said.

The town does not have many kids, nor does it claim an ethnic balance, Schumacher states matter-of-factly.

“I will say the town is not as integrated as many towns. We’re out here in the middle of nowhere. It’s pretty much retired people. Many of them are second-generation. Their parents bought out here and they came when they inherited the land or the house. The first generation that came here, a lot of them were recruited by the owners of the development. So we have a lot of people from Idaho, Colorado, Montana. We have Canadian people.

“We don’t have a lot of ethnic diversity. It’s not by design. It just is. We have a couple of folks that are African American, but compared to the 1,500 people that live here, not much. We have a little bit of Latino influence. I have found this town is incredibly welcoming to anyone. I’ve never seen anything that concerns me in terms of people (not) be welcomed to the town.

“You don’t see kids running around on the streets. Maybe occasionally you’ll see them walking down to the grocery store to buy a candy bar or an ice cream cone. But they don’t really play out on the streets. There’s no place for them to play.”

Incorporating Queen Valley was discussed amongst residents less than five years ago, but the concept was dismissed almost unilaterally as impracticable, Schumacher said.

“It got floated once, and it was killed pretty quick. That’s not to say it couldn’t come up again in the future,” she said. “I guess I would say it’s not as practical for Queen Valley as a town as for other places perhaps, and that’s because for six months of the year, sometimes even more, there’s 300 to 500 people here and if we had people that were elected to positions like mayor and all that stuff that comes with incorporating, ... we wouldn’t have them here dealing with it — they’d be in Michigan or Canada — and the people who stay here year-round are typically still working so they don’t have time to run for office. Not real practical.

“And on top of that, those folks pay some homeowners tax here, but a third of our town is trailers. They don’t have great property value on them, unfortunately, compared to a stick-built home. We do have some really nice homes but not a lot of them.”

A homeowners association in Queen Valley exists, but Schumacher describes it as “non-restrictive” and “social-only” rather than with uptight managers checking every regulation of residential property. Fees are $20 a year, and nobody wants to change that.