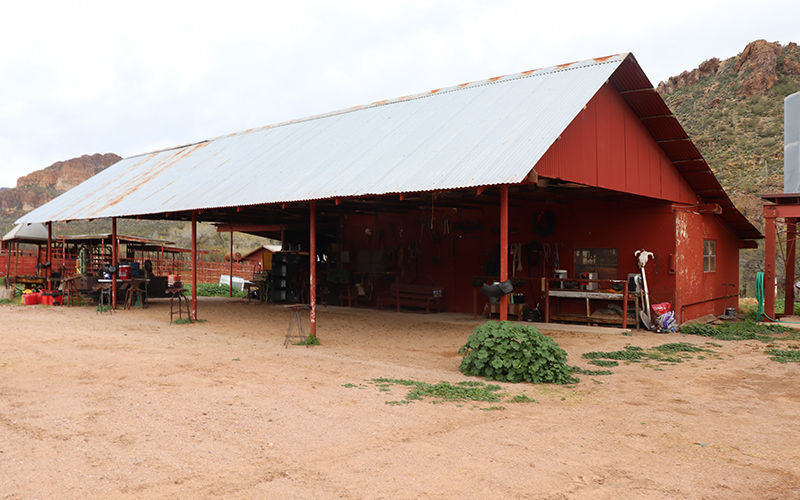 Owner Chuck Backus opened Quarter Circle U ranch, on the edge of the Superstition Mountains in Arizona, more than four decades ago. He runs the ranch differently than when it opened, using scientific acumen to raise cattle in the Southwest. (Photo by Lurissa Carbajal/Cronkite News) 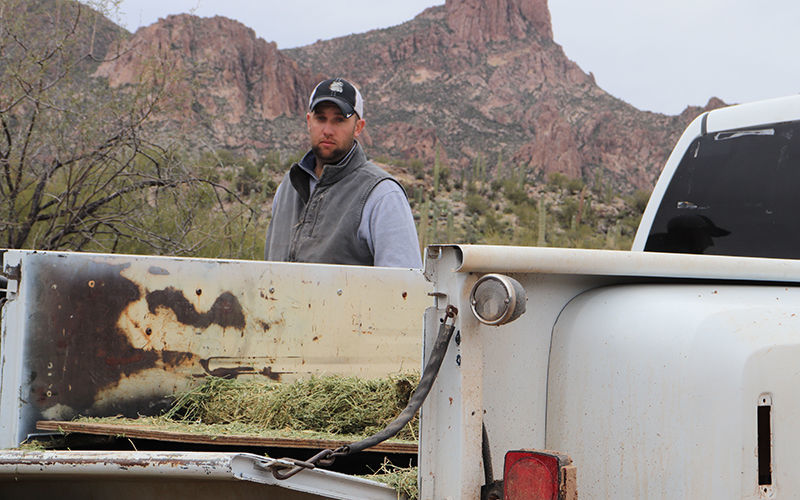 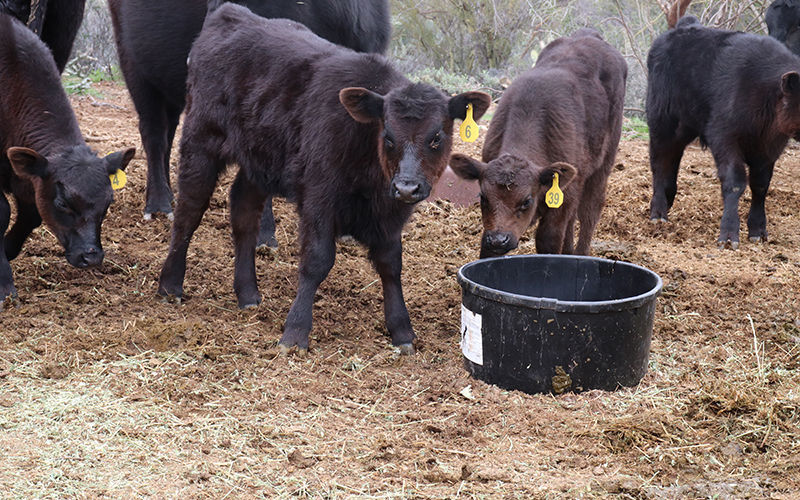 Rancher Chuck Backus said calves are vaccinated to remain healthy but no hormones are used. Those aren’t necessary, he said, because the calves grow to the same size as those that are given hormones. It just takes a little longer. (Photo by Lurissa Carbajal/Cronkite News) 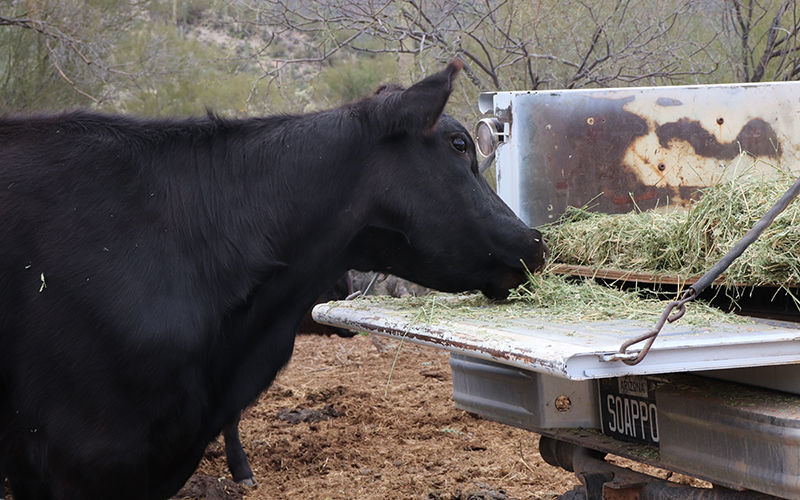 The cattle in Quarter Circle U Ranch have learned to associate the sound of Jordan Selchow’s white truck with food. Cattle come to him rather than his having to chase them down. 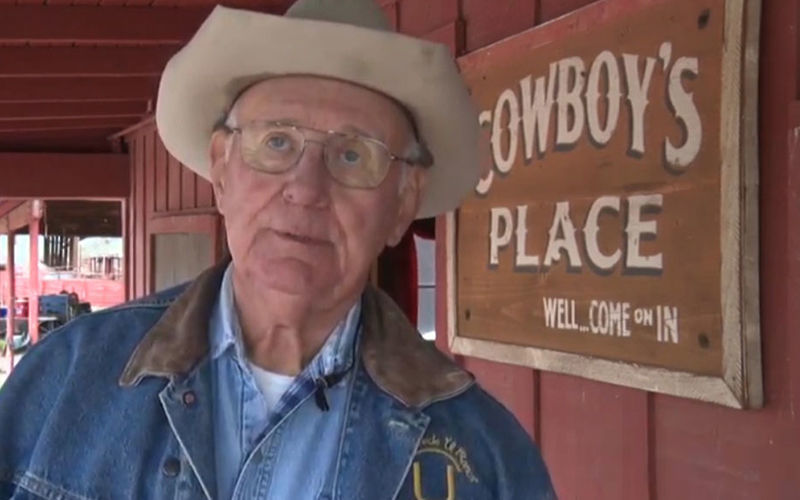 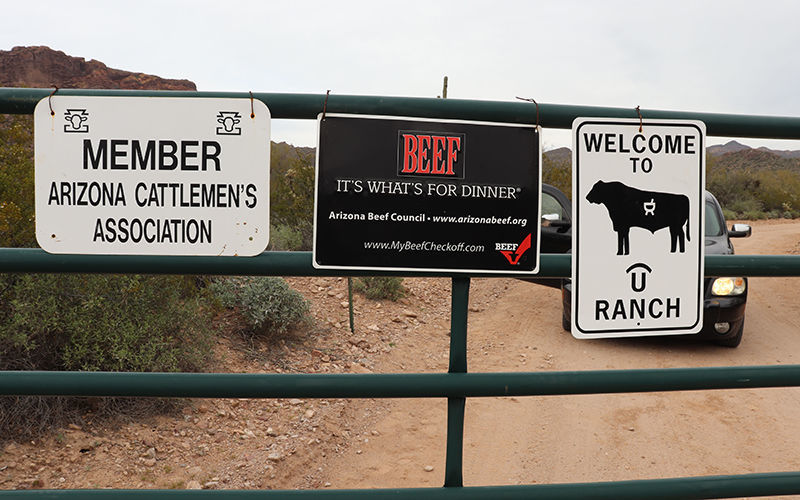 A green gate greets visitors to Quarter Circle U Ranch, where the cattle are genetically selected and artificially inseminated to end up with tastier beef. (Photo by Lurissa Carbajal/Cronkite News)

Chuck Backus is a ranch owner cloaked in science, his background in engineering leading him to choose the right genes for cattle to survive in the hardened landscape and heat of the Arizona mountains.

He balances gene selection and artificial insemination with human kindness toward his cows, ending up in juicier and tastier beef.

Tiffany Selchow, director of social marketing and consumer outreach for the Arizona Beef Council, said research is a key element to improving the multibillion-dollar beef industry.

“We’re able to pick out animals that produce more beef and breed those animals together to create an animal that has more pounds per animal,” said Selchow, whose husband, Jordan, works at the ranch. The couple live on the ranch with their daughter. “So that means that we are using less cattle but producing more beef and being more efficient with our resources.”

In Backus’ case, he has spent more than four decades turning scientific acumen he used in his career during the Cold War to raising cattle in the Southwest.

Backus grew up on a dairy farm in West Virginia, earned a college degree in Ohio and, drawn by the space race of the 1950s, an interest in science led him to the University of Arizona. He earned two graduate degrees in nuclear engineering, spending those early years in Arizona hiking, climbing and getting to know the history and people of the range.

After a few years of research in various university labs, and working on experiments used on NASA space missions, Backus taught engineering at Arizona State University.

Several years later, he and his wife, Judy, decided to establish some ranching roots in the mountains of northern Pinal County.

He tried raising cattle the traditional way, at first. Three decades later, he changed his mind.

Economics of the beef industry

Backus was making a career shift to an industry considered one of the top agricultural businesses in the country. In 2016, data showed that the U.S. surpassed $1 billion in sales in the cattle industry, with a 2018 projections for economic impact of more than $67 billion.

The Arizona impact affects consumers and employees: More than 5,000 people worked in the cattle industry in 2014 and about 8 million people were fed by Arizona ranchers in 2015, according to the U.S. Department of Agriculture.

Beef consumption in the U.S. has been on the decline for nearly a decade. The US Department of Agriculture reported that consumption of beef started to decline three decades after health concerns dented the demand for beef.

Challenges in the ranch

The Brahman-cross calves survived for a long time in the tough, mountainous terrain but the beef quality was poor. He also discovered that his herd lacked a genetic component that would help the ranch flourish.

He changed his approach.

Rather than buying bulls and heifers to match his ranch’s environment, he decided to use genetics to build the bulls and cows that deliver calves.

He faced several challenges because his ranch is located in a high desert terrain that makes calving difficult.

“Here in the Superstition Mountains, it takes us about an hour to an hour and a half just to ride our horses to where the cattle are located,” Jordan Selchow, Quarter Circle U Ranch Manager, said.

A different type of cattle ranch

Backus now runs his ranch as a data-driven laboratory for sustainability. He shifted to gene selection, adopted artificial insemination methods and cut calving seasons in half, to two months. He also adopted more intensive feed models such as using non-hormone, non-antibiotic programs and utilizing custom feeding lots that lower the feed-to-gain ratio.

The tightened breeding season allows the service bulls to stay on easier terrain before the cows head north. That keeps the bulls in a less demanding pasture during the calving months and this means Backus does not have to have the bulls back into the mountains in the adverse condition.

Selectively choosing genes means that Backus can design cattle that not only survive in the Arizona mountains but behaves more docile than other breeds.

It paid off. He increased the success rate of breeding in his herd and now has about 200 cows.

The quality of meat is affected by the handling practices most of the time. Overworking or stressing the cattle can turn meat from a healthy looking red to a dark purple.

“We work them very calmly, very quietly,” Jordan Selchow said of herding cattle. “We aren’t using any types of equipment to force them in the direction we want them to go. We encourage them to go just by our body placement and by overall being calm and quiet with them.”

With just the sound of a revving engine, the cow run to his white truck because the cows associate it the sound with food.

Backus said, if cattle can survive the rough terrain on his ranch, the practices of gene selection and artificial insemination can be put into place on ranches throughout the state.

“I have one of the roughest ranches in Arizona and, if I can raise quality-carcass calves in my country, other people can do it on their ranches.” Backus said.