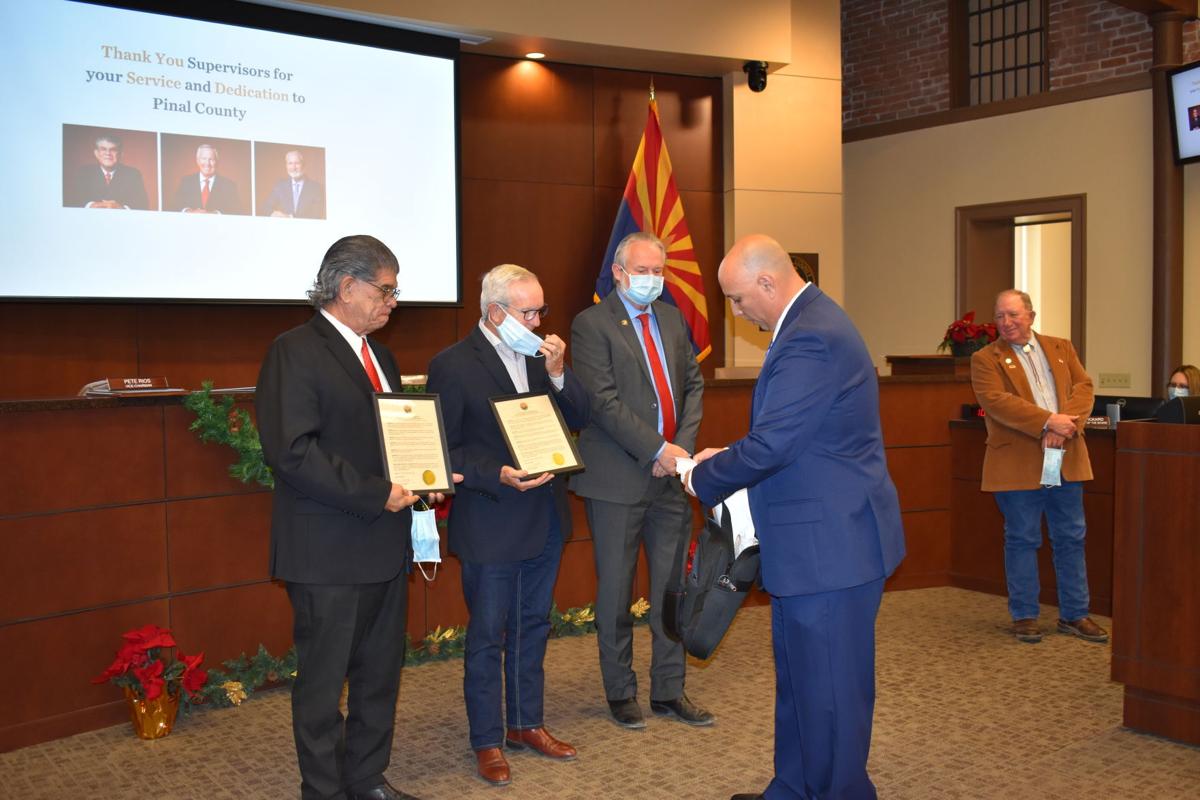 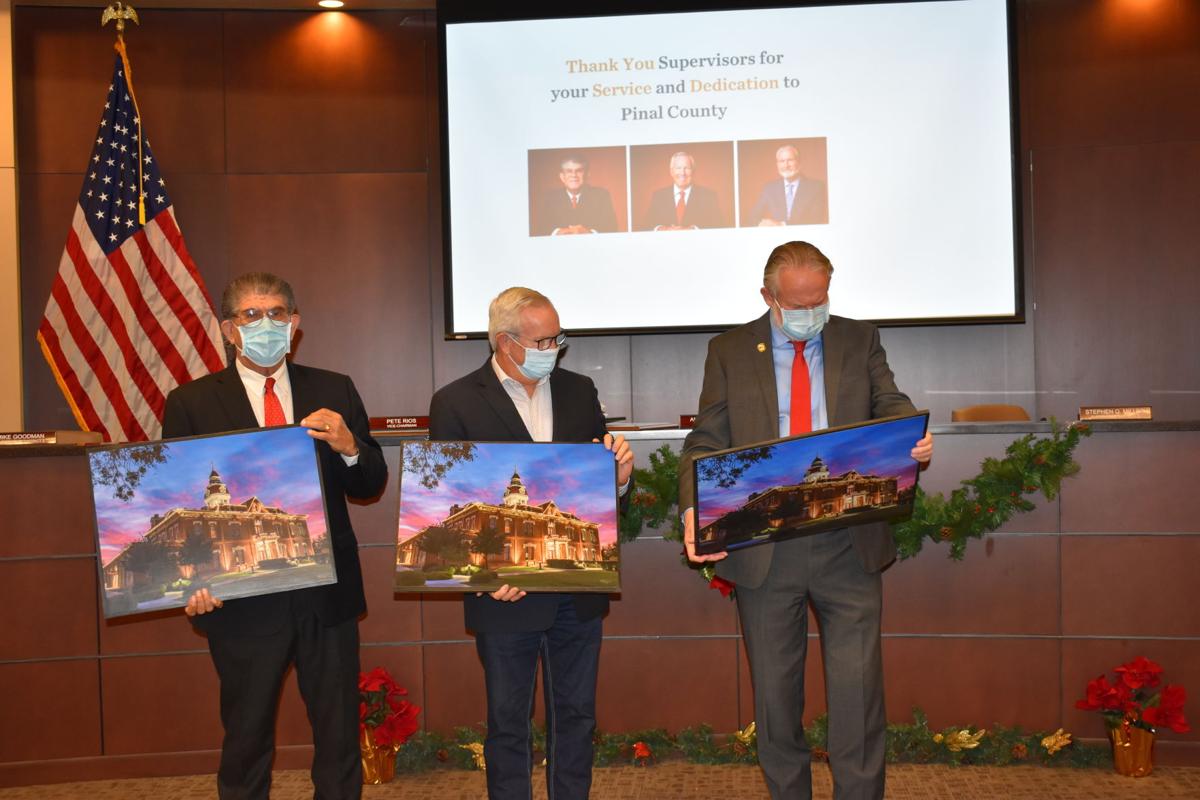 From left to right: Supervisors Pete Rios, Chairman Anthony Smith and Todd House receive parting gifts and farewells during the last meeting of the year. 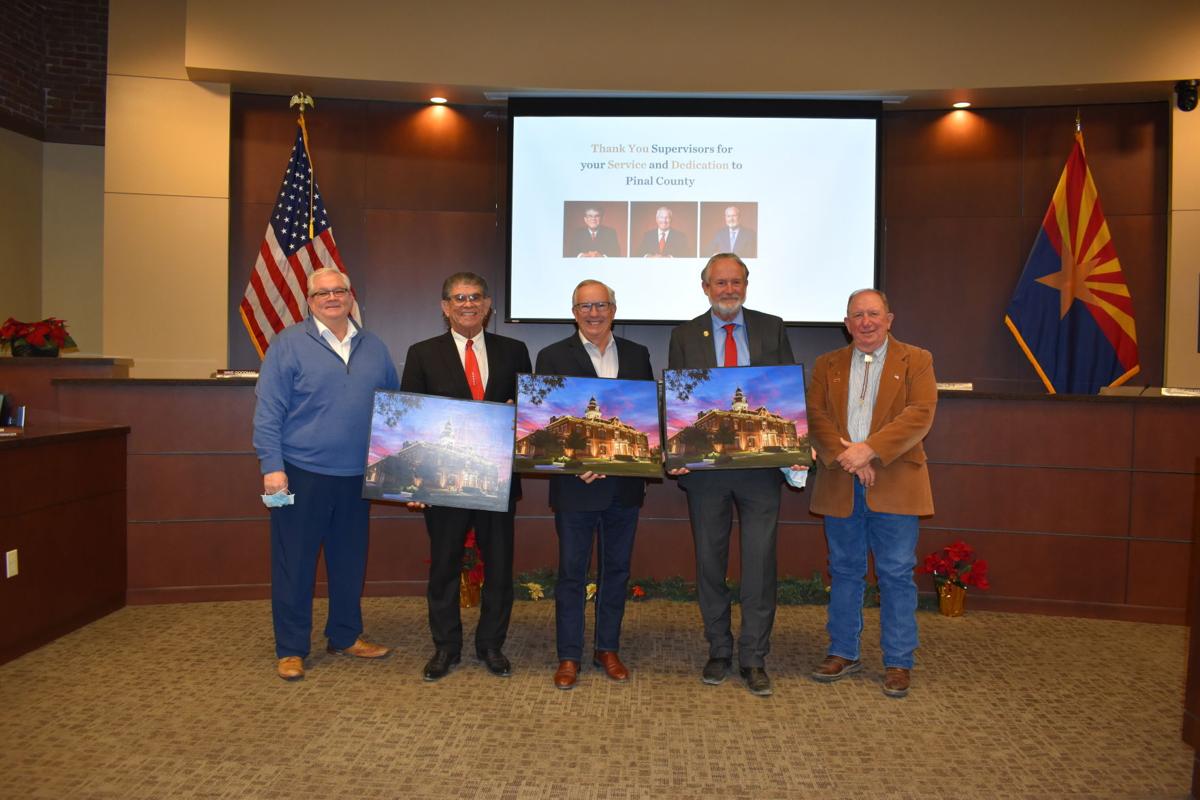 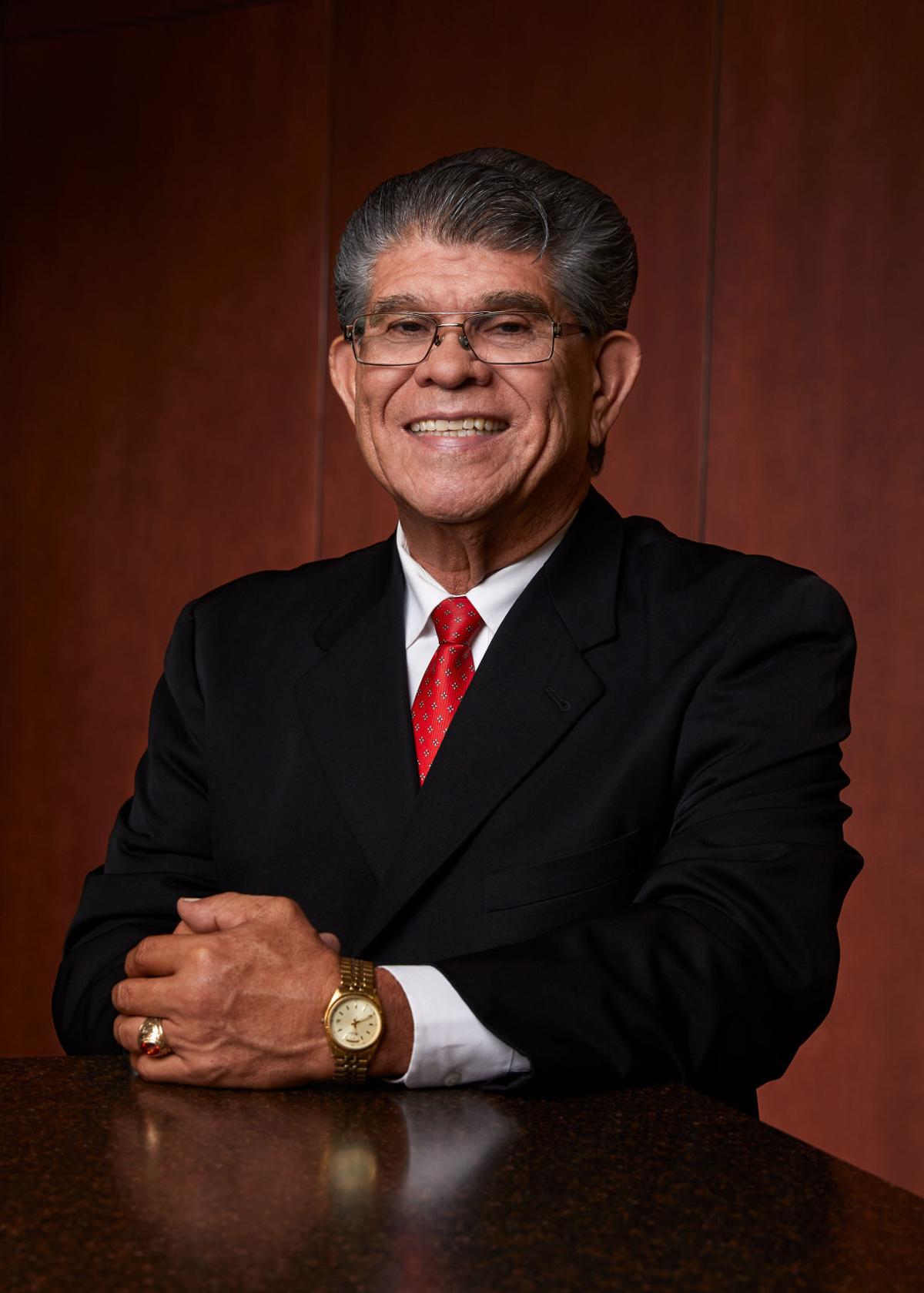 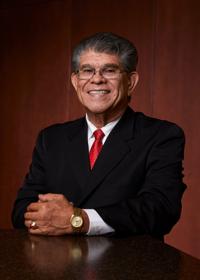 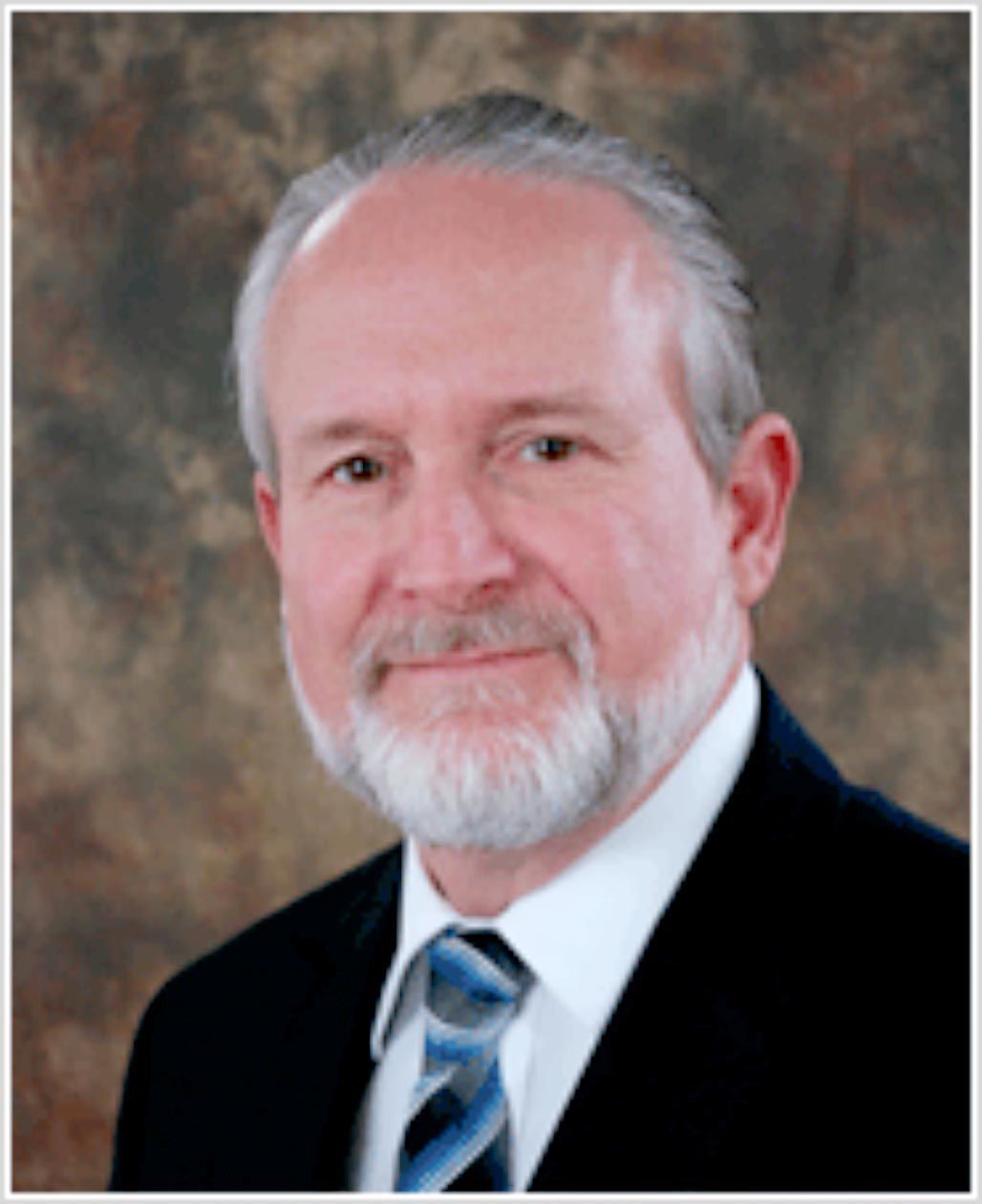 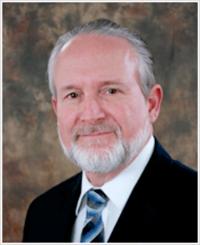 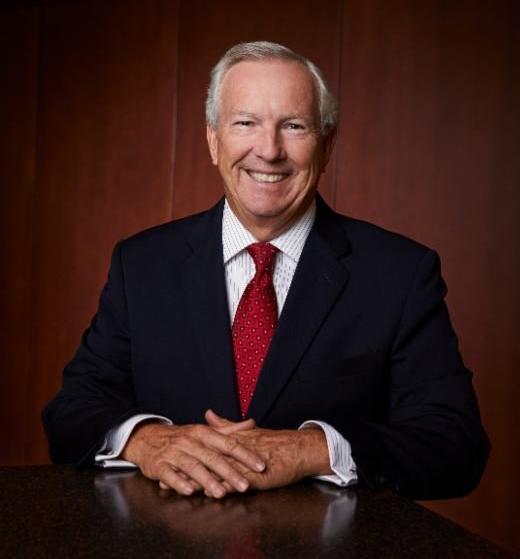 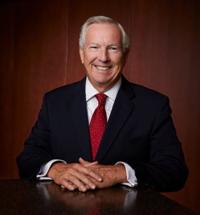 From left to right: Supervisors Pete Rios, Chairman Anthony Smith and Todd House receive parting gifts and farewells during the last meeting of the year.

FLORENCE — Three outgoing supervisors were given a dignified sendoff, including a video tribute, during the final meeting of the current Pinal County Board of Supervisors on Wednesday.

Chairman Anthony Smith had announced his retirement earlier in the year, while Todd House of District 5 and Pete Rios of District 1 lost in the primary and general elections, respectively.

Board members and colleagues expressed appreciation for the work they had done while in office.

“We’ve had differences but our common ground has always been for the best interests of this county,” said Supervisor Mike Goodman, R-San Tan Valley. “I love the three of you and I appreciate what a privilege it’s been for me to serve with you.”

Both Smith and Rios have had multiple roles in political office. Prior to being elected supervisor in 2012, Smith was the mayor of Maricopa. Rios, the lone Democrat on the board, may be ending a long and notable career in Arizona politics: He was an Arizona state senator in two separate stints spanning 20 years beginning in 1982 and also served four years as a state representative. Rios, of Dudleyville, lost a close race to challenger Kevin Cavanaugh last month; the next would have been his fourth and final term, he had said.

“I expect we will see each one of the three in some fashion,” said Pinal County Emergency Manager Chuck Kmet. “They still have a lot of knowledge to give and policy to help create. I am hoping they can enjoy a bit of time away from all the craziness.”

All three expressed a desire to continue to participate in local politics in some fashion. House, of Apache Junction, said he planned to take a few years off but he was “not going away,” while Smith said that he intended to “stay busy” and that the decision to leave was difficult but the right move for him and his family.

“I will try to force myself to retire if I can get that political bug off my butt,” Rios said, “but it is still nibbling.”

Much of the meeting’s discussion was what to request in a letter to the Arizona Corporation Commission regarding the Johnson Utilities sale to EPCOR. The acquisition of water and wastewater utilities is scheduled to be considered by the ACC on Dec. 22. However, Supervisor Goodman expressed concern that, because of the pandemic, the public was not sufficiently informed on details of the sale, including potential rate increases.

Goodman and the other supervisors were hopeful for the sale to go through but acknowledged that the timing made it unlikely a public hearing would occur unless the ACC approval was delayed.

“We need to be looking out for the public,” Goodman said. “I believe it would be irresponsible to not allow the public to have full understanding of where this thing is going.”

The board also approved the addition of a new role, a government relations and policy adviser, who will be responsible for acting as a liaison between state and county officials and helping to draft and implement policy strategies.

“I think we have expert staff out there that each do a piece of this,” Rios said of the newly created position, “but it’s piecemeal and now we will bring it together. It’s the right thing to do.”

Other items approved during the meeting included establishing formal policy around political activity by Pinal County employees and frontloading the sick leave hours of employees for 2021 due to the pandemic.

“We don’t want the pandemic to create any additional harm,” said Interim Deputy County Manager Mary Ellen Sheppard. “We also don’t want to put employees in a situation of feeling the need to come to work when they are ill.”

The new board will convene on Jan. 6. Supervisor Steve Miller, R-Casa Grande, and Goodman, recently re-elected, were nominated to be interim chairman and vice chair, respectively, until the new board can elect positions on that date.