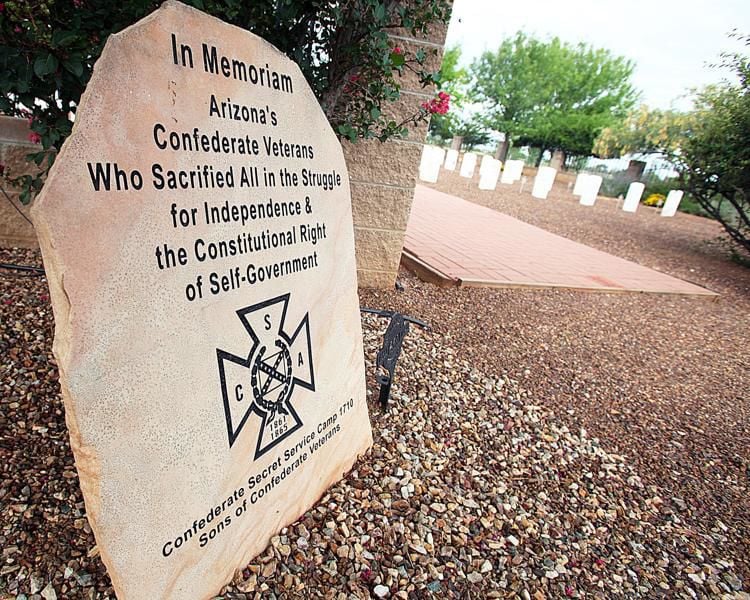 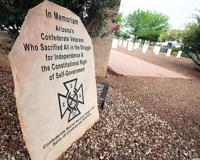 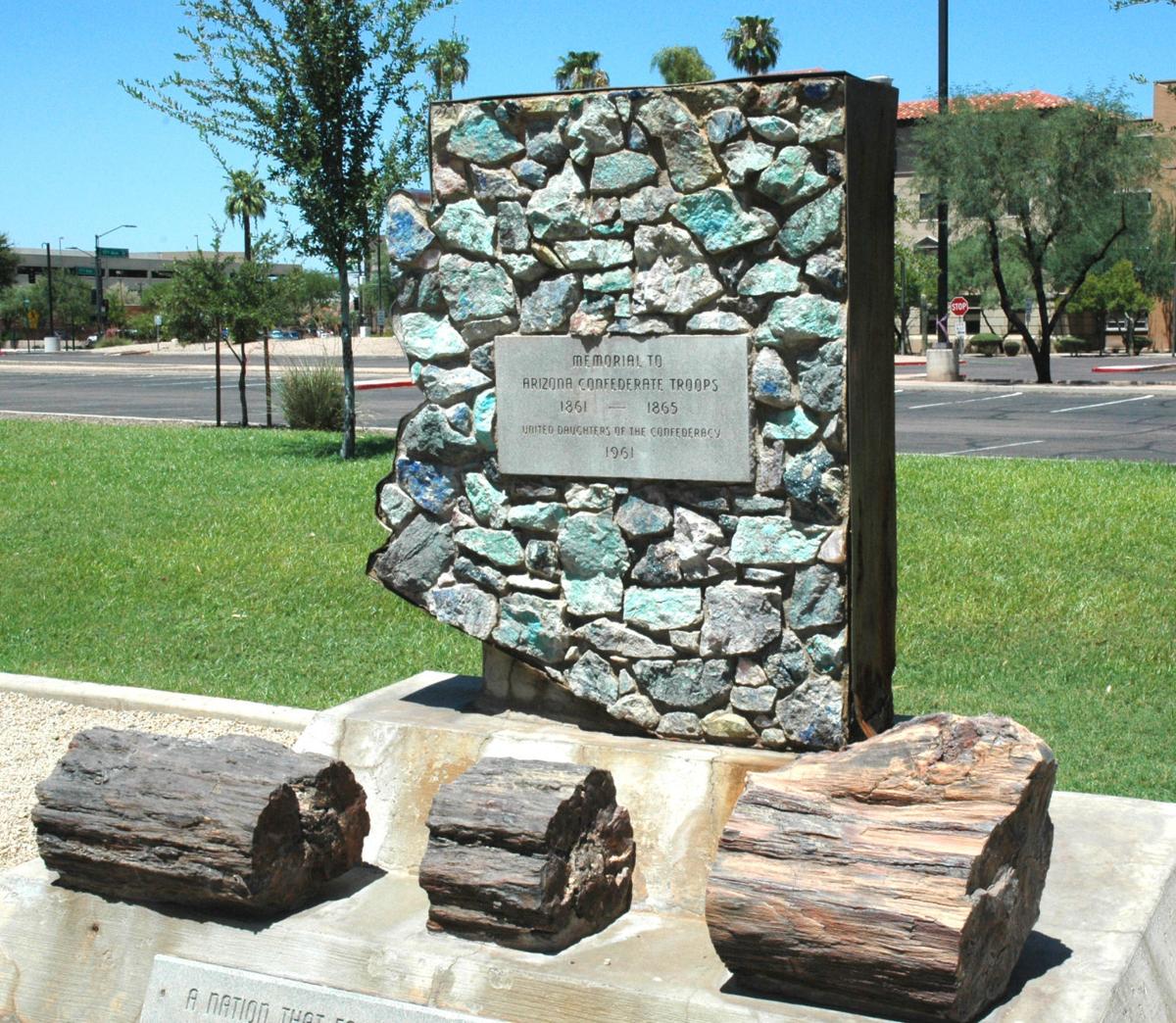 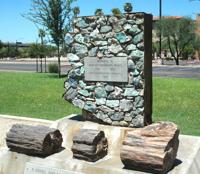 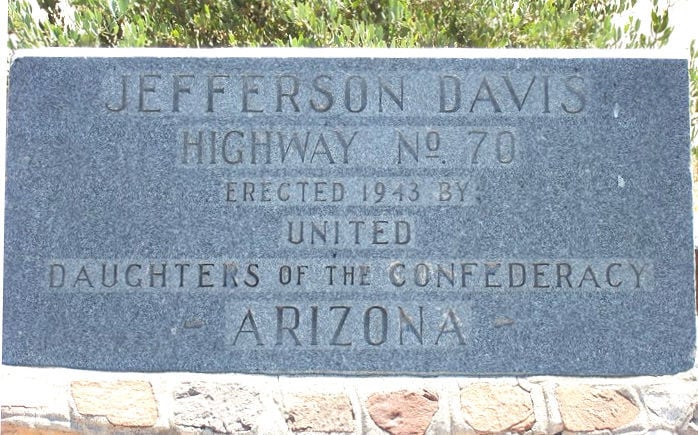 A marker for the Jefferson Davis Highway that currently sits along Highway 60 in Gold Canyon. 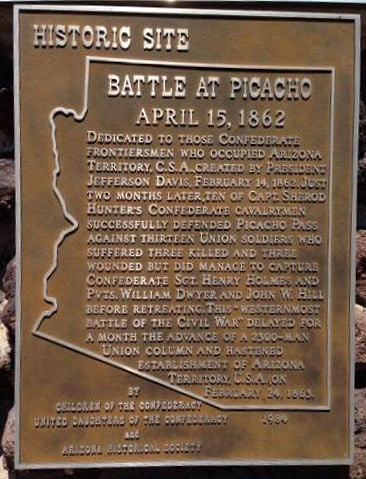 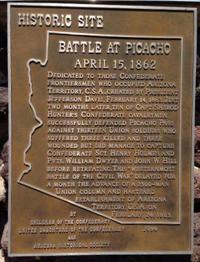 PHOENIX — New pressure is building on Gov. Doug Ducey to reverse his defense of having monuments to the Confederacy on state-owned property.

In a letter Wednesday, James McPherson III, president of the board of the director of the Arizona Preservation Foundation, reminded the governor of the calls in 2017 by many, including his organization, to remove the monuments following violence by white supremacists in Virginia.

“Unfortunately, nothing was done,’’ McPherson wrote.

Now, he told Ducey, it is time to finally deal with the issue “after yet another senseless killing of an African-American and the subsequent nationwide demonstrations seeking the elimination of systemic racism and bigotry.’’

But the foundation is aiming its ire at more than just the monument to Confederate soldiers, erected in the 1960s, that sits across the street from the state Capitol. McPherson also is demanding removal from state property:

Ducey, when first asked about these in 2017, defended them as helping people “know our history.’’

“I don’t think we should try to hide our history,’’ he said. “It’s not my desire or mission to tear down any monuments or memorials.’’

But McPherson told Ducey on Wednesday that argument holds no water.

“The removal of these monuments will not ‘change’ history or ‘erase’ it,’’ he wrote. “What does change with such removals is what Arizona decides is worth of civic honor and recognition.’’

Anyway, McPherson noted, it’s not like any of these were erected close to the time of the war.

The closest Ducey has come to acknowledging the controversy has come over the monument in Wesley Bolin Plaza across from the Capitol, the one that was erected by the United Daughters of the Confederacy at the beginning of the civil rights movement in 1961. Asked last month about new calls to remove that in the wake of protests that followed the killing of George Floyd by a Minneapolis police officer, the only thing Ducey would say is that he did not want to make such a decision on his own.

“There is a public process to be able to put something into Wesley Bolin plaza or on state property,’’ the governor said. “I think there should be a public process if someone wants to go the alternative route.’’

But it was Ducey who signed legislation in 2018 abolishing the Capitol Mall Commission which until then had the power to decide what went in — and what came out — of the plaza. That law now gives the power of removal exclusively to Andy Tobin, the governor’s hand-picked director of the Department of Administration.

And the other three monuments are under the purview of state agencies whose directors report to the governor.

On Wednesday, aides to Ducey refused to comment on McPherson’s letter or the whole issue of the monuments.

But it hasn’t just been the governor defending their presence.

Nicole Baker, spokeswoman for Wanda Wright, director of the Arizona Department of Veteran Service, said the monument in Sierra Vista is at the entrance to what she called a “cemetery within a cemetery.’’ These contain remains which originally were buried in the old military cemetery that served Fort Lowell in the late 1800s but were moved to Sierra Vista.

Baker said each of the tombstones is labeled “unknown’’ because of the lack of DNA to identify remains. But she said that this section covers all who served in any fashion from the 1860s through the 1880s.

The stone marker in question was erected by the Confederate Secret Service Camp 1710, Sons of Confederate Veterans.

“While we can’t erase our nation’s history, we can certainly learn from it and help future generations plot the way forward,’’ Baker said.

McPherson has a different take.

“These monuments celebrate and promote bigotry and racism,’’ he wrote to Ducey. “They are devoid of true Arizona history and their very presence continues to hurt our African-American friends, neighbors, coworkers, and strangers we may meet on the bus, at the lunch counter, or on a march for justice.’’

The current controversy mirrors what happened three years ago when Rep. Reginald Bolding, D-Laveen, led the drive to remove Confederate monuments off of state property.

“Any African-American and many other individuals should not be required to use our taxpayer dollars to keep up with the upkeep and maintenance of these memorials,’’ he said at the time. Bolding said that would be comparable to having monuments on public lands to those who fought for the Nazis.

While the monuments all remain, Bolding did win a victory of sorts at the time.

In fighting to have the marker for the Jefferson Davis Highway removed, Bolding also pushed to have any reference to it scrubbed from state maps.

But John Halikowski, director of the Arizona Department of Transportation, said there was no need for that because as far as his agency is concerned it no longer exists.

Halikowski acknowledged that the Arizona Highway Commission voted in 1961 to designate U.S. 80 through Arizona as the “Jefferson Davis National Highway.’’ Davis was the first and only president of the Confederate States of America, and Arizona was one of 15 states to adopt the highway name.

But he pointed out to the Arizona State Board on Geographic and Historic Names that U.S. 80 no longer exists, with the same stretch of road now bearing other route numbers. And he said once U.S. 80 disappeared, so did the designation.

At the same time, however, ADOT has allowed the monument to remain on state right of way, with an agency spokesman saying it is “not an immediate safety hazard,’’ meaning there are no safety reasons to remove it.

That rock and granite marker in Gold Canyon originally was located along U.S. 70 at Duncan, near the New Mexico border. It was moved to its current location in the 1960s with state approval.

ADOT: There is no 'Jefferson Davis Highway'

Majority in Arizona want to keep Confederate monument near Capitol

PHOENIX — Gov. Doug Ducey’s assertions that he has no role in deciding the future of four Co…

Every day driving home from work, I pass by a house with a flagpole. At the top is the flag …

PHOENIX (AP) — Two Confederate monuments on Arizona state property, including one at the Capitol, have been removed.

GOLD CANY0N — A Confederate monument along U.S. 60 was removed Thursday — but someone, somewhere, apparently misses it.