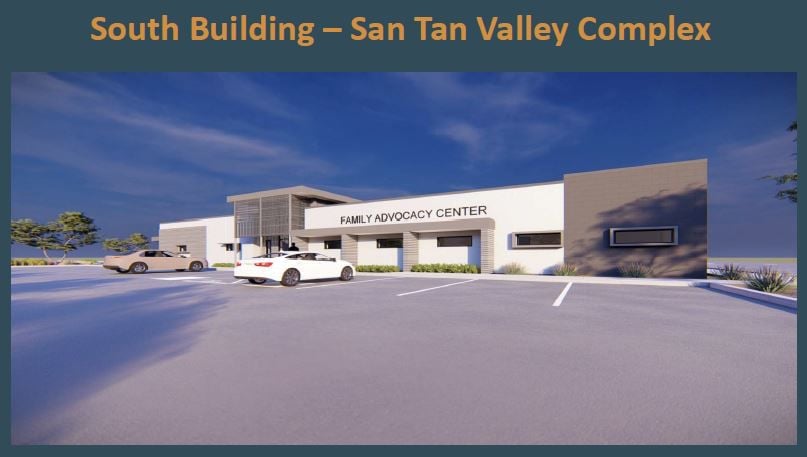 An artist’s rendering shows one of two buildings planned for a new Pinal County government complex in San Tan Valley along an extended Schnepf Farms Road. 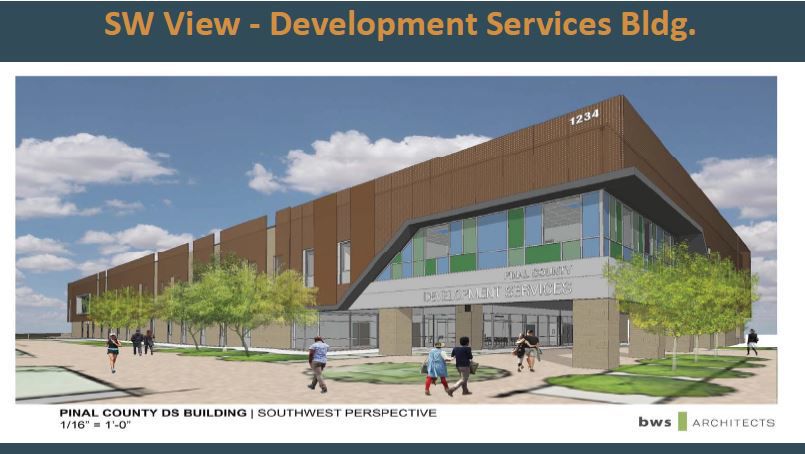 An artist’s rendering shows one of two buildings planned for a new Pinal County government complex in San Tan Valley along an extended Schnepf Farms Road.

FLORENCE — Pinal County staff are planning for a $70 million 30-year bond issue for new county facilities and renovations over the next two years.

These include a new five-story county attorney office building next to the existing courthouse at a cost of $20 million. County Manager Greg Stanley told the Board of Supervisors new county complexes in San Tan Valley and Maricopa would reduce citizen travel time to and from county offices, and provide easier access for more people to a variety of county services.

A new two-story Development Services building in Florence would get those personnel out of the county’s Building F, which is actually three buildings combined more than 10 years ago and is “very inefficient,” Stanley said.

The current bond market is favorable for this level of financing, Stanley told the Board of Supervisors Wednesday.

Without taking a vote, Stanley told the Supervisors he sensed from their comments that a majority of them were in favor of issuing bonds. He said county staff would begin work toward that end, and the Supervisors would have more opportunities to vote on the matter in the weeks ahead.

Supervisor Steve Miller, R-Casa Grande, expressed skepticism of a project so large. He said for the county to borrow $70 million for various buildings over a couple of years is “a lot of moving parts.” He continued that bond investors like to deal with governments, because governments can always raise taxes to pay their debt.

Miller said he could support replacing the county’s Building F, but for everything else, “I need more information.”

Supervisor Anthony Smith, R-Maricopa, replied that the need for these facilities has already been established in the master facilities plan approved a year ago. Supervisor Pete Rios, D-Dudleyville, agreed it might seem preferable to “break it in half” and do fewer buildings at a time, but that would ultimately be more expensive.

The projects actually total $78 million, but county staff estimate that $8 million can be covered from non-General Fund sources. Impact fees the county collects on new development can also cover some of the cost. Miller asked Stanley if impact fees can pay debt service, and Stanley replied yes.

Supervisor Todd House, R-Apache Junction, asked where the personnel in Building F would work while their new facility was under construction. Stanley replied they’re working on that plan. He added if the county attorney’s building goes up first, that would free up a lot of office space.

The other projects are:

• A two-story Development Services building and a separate Emergency Operations Center building would be located at Florence and Park streets in Florence, on the east side of the county’s Building E. The buildings would total 62,000 square feet at an estimated cost of $16 million.

• A county complex in Maricopa’s Heritage District would be located on a county-owned 5-acre parcel. It would consist of two buildings totaling 42,500 square feet and is estimated to cost $11 million.

• Similarly, a county complex in San Tan Valley would be built on a county-owned 5-acre parcel near the Central Arizona College campus and near Bella Vista and Schnepf roads. It would be two buildings totaling 48,200 square feet and is estimated to cost $16 million.

FLORENCE — After Pinal County supervisors expressed skepticism about a proposal for a new moderate-to-low-density subdivision near Florence, t…

FLORENCE — Pinal County’s primary property tax rate would decrease from $3.83 per $100 of net assessed value to $3.79 in a tentative budget th…

FLORENCE — Construction is set to begin on new Pinal County office buildings in Maricopa and Florence, after contracts were awarded by the Boa…