The Tom Mix Monument and Rest Stop along State Route 79 is part of the Pinal Pioneer Parkway between Florence and Oracle Junction.

This restored 1937 Cord 812 Phaeton was the car Tom Mix was driving when he was killed in a 1940 accident in a Pinal County wash. 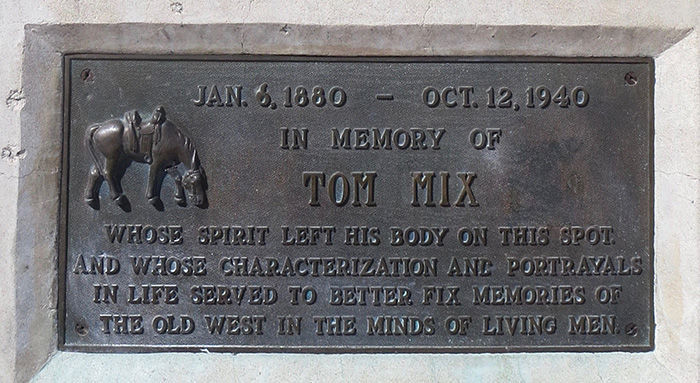 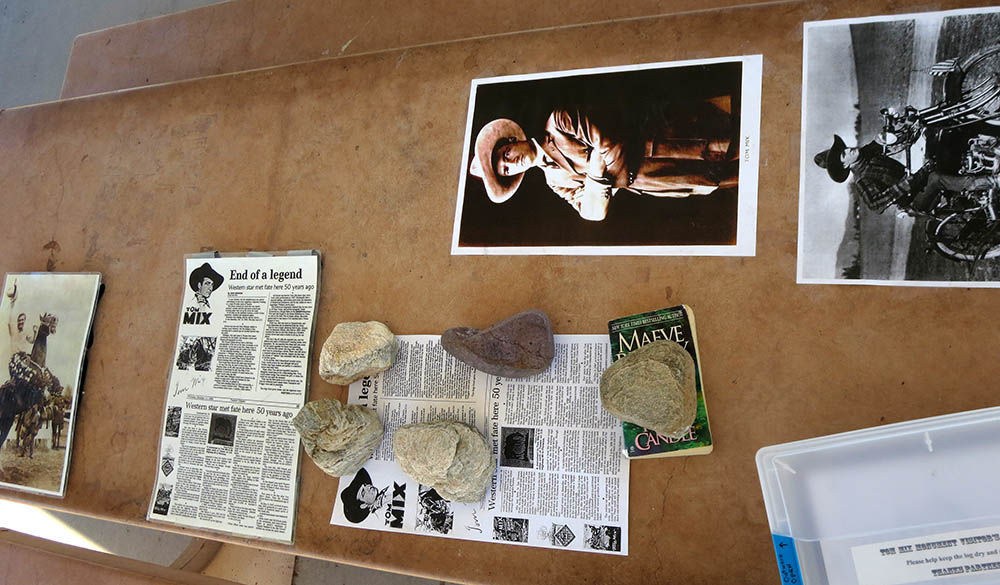 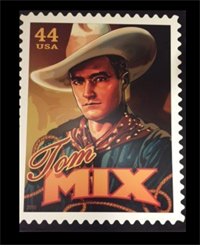 FLORENCE, Arizona tips its cowboy hat to Tom Mix, a Western film superstar a century ago, with a stone monument along a quiet stretch of State Route 79 about 17 miles south of Florence.

The roadside memorial with a metal silhouette of Mix’s steed, Tony the Wonder Horse, is near the spot in 1940 where the silent-film actor crashed and died in his era’s supercar, a 1937 Cord 812 Phaeton.

The Arizona Department of Transportation rest stop along the 42-mile Pinal Pioneer Parkway includes ramadas, picnic tables, an informal display and a marker that reads:

“In memory of Tom Mix whose spirit left his body on this spot. And whose characterization and portrayals in life served to better fix memories of the old West in the minds of living men.”

Travelers stop near milepost 116 to pay their respects to an actor and trick rider who made close to 300 films from 1909 to 1935 and was paid as much as $17,000 per week. Hollywood portrayed Mix as an upstanding cowboy, with flashy Western garb and a signature Stetson. He became the standard for the Western heroes who followed him.

“He was a very elegant cowboy,” said Martha Jo Chavez, 79, of Las Cruces, New Mexico, during a recent visit with her son to the Tom Mix Monument.

“Arizona reveres its cowboys,” she said of Mix, Andy Devine of Kingman and Rex Allen of Willcox.

In the 1940s, Chavez said she and her brother Jiggs Garcia on Saturdays went to double features in Las Cruces to see Mix and cowboy stars Roy Rogers, Hopalong Cassidy and Gene Autry. The movies cost a dime, and it was a nickel each for a Coke and popcorn at the Rio Grande Theatre, a 1926 two-story adobe movie house that’s still operating.

“Those were great Saturdays,” she said.

Younger visitors to the Tom Mix Monument may not be familiar with Mix. His film career ended in 1935, and few of his movies are readily available. However, pop culture references have kept Mix’s name out there. That includes his photo on the 1967 Beatles album “Sgt. Pepper’s Lonely Hearts Club Band,” a mention of a Tom Mix pocket knife in an episode of “M*A*S*H” and the 1988 film “Sunset,” starring Bruce Willis as Tom Mix and James Garner as Wyatt Earp.

Chris Reid of the Pinal County Historical Society and Museum said Mix’s legacy as King of the Cowboys transcends his era. The museum in Florence includes a collection of Mix memorabilia.

“He was a good-looking guy with an interesting story, born in a shack in Pennsylvania in 1880, and he went on to live in a mansion in Beverly Hills,” she said. “Mix was also a Romeo who was married five times, and he died tragically.”

On Oct. 12, 1940, Mix was speeding on what was then U.S. 80 from Tucson to Florence when he crashed through a highway barricade into a shallow wash. Mix might have survived, but an aluminum Haliburton case from the back seat struck him in the back of the head.

Mix’s Cord 812 Phaeton was damaged but not beyond repair. Bob H. White of Scottsdale bought the car in 2010 and since has won awards at top car shows after a full restoration. Mix had customized the vehicle with hand-tooled leather fender guards, an accelerator pedal fitted for his boot heel and a steering-wheel holster for his Smith & Wesson revolver.

White, who published “The Tom Mix Cord: Saga of a Western Film Star’s Classic Motorcar,” has said the super-charged Cord could top 100 miles per hour, and Mix was known to drive fast.

“It wasn’t the first car Mix crashed, but it was the last,” White said.

A visitor log at the Tom Mix Monument includes comments one might expect like “R.I.P,” “He was my hero as a little boy” and “He was my dad’s hero.”

A handful of travelers per day take the time to write in the visitor log. They come from Belgium, Germany, South Africa, Canada and all over Arizona and the United States.

A Canadian traveler said: “Our annual trip to Arizona would not be complete without a stop at Tom’s memorial.”

A San Diego visitor wrote: “May the Western spirit never die.” And a Fort Worth, Texas, couple had the last word on April 23 with: “We shall meet him in the roundup in the sky.”

CASA GRANDE — A capital campaign has been initiated to raise money for structural repairs needed at The Museum of Casa Grande.

FLORENCE — Silent movie star Tom Mix only owned his 1937 Cord for three years before he crashed it and died south of Florence. Bob White of Sc…