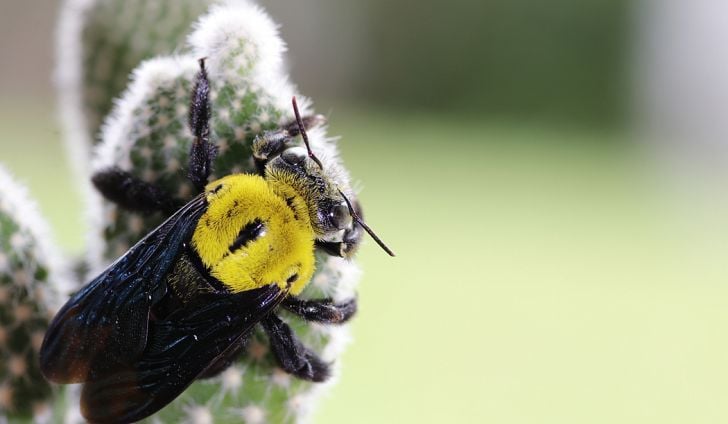 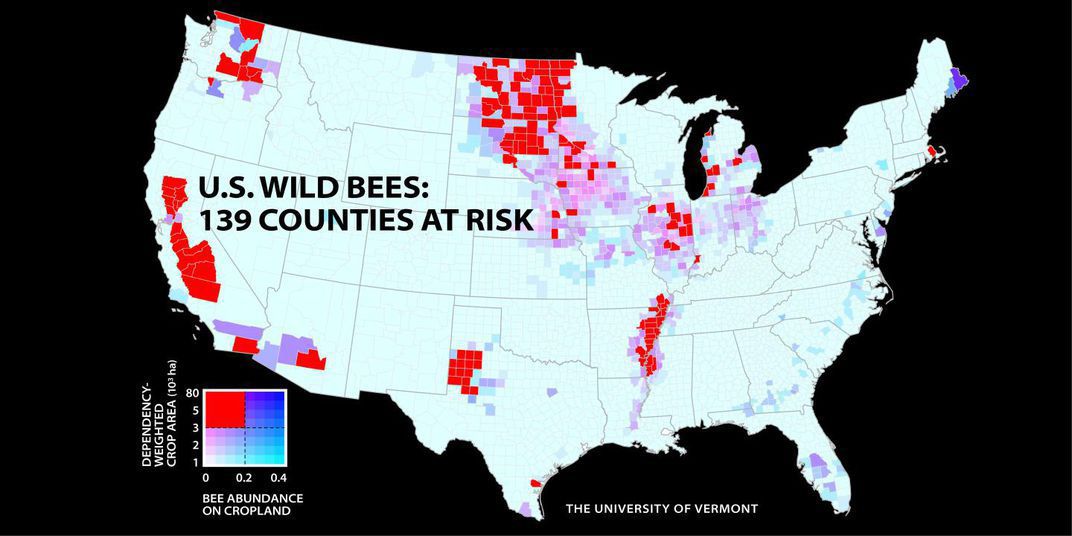 This map shows the identified regions that face mismatch between wild bee populations and crop demand. Pinal County has a critical need. 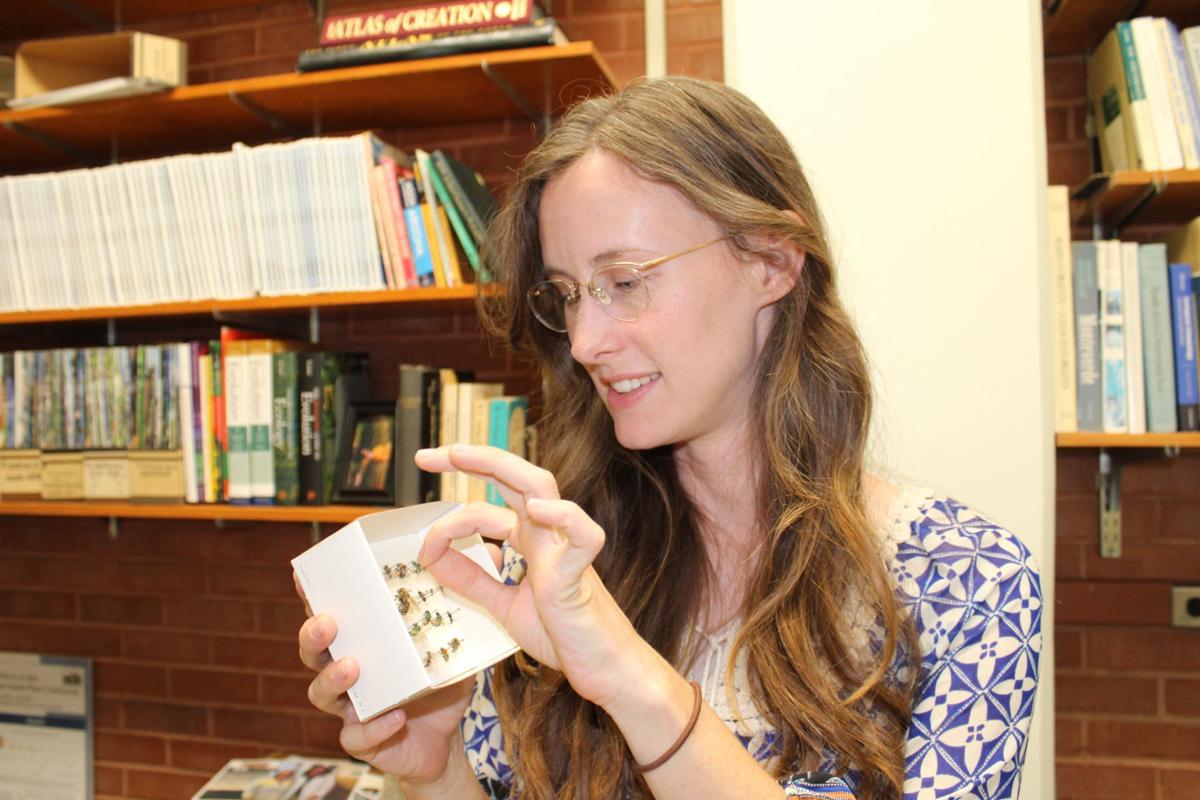 Entomologist Kathryn Busby shows her collection of native bees in the University of Arizona. (Photo by Kaite Fletcher/Arizona Sonora News) 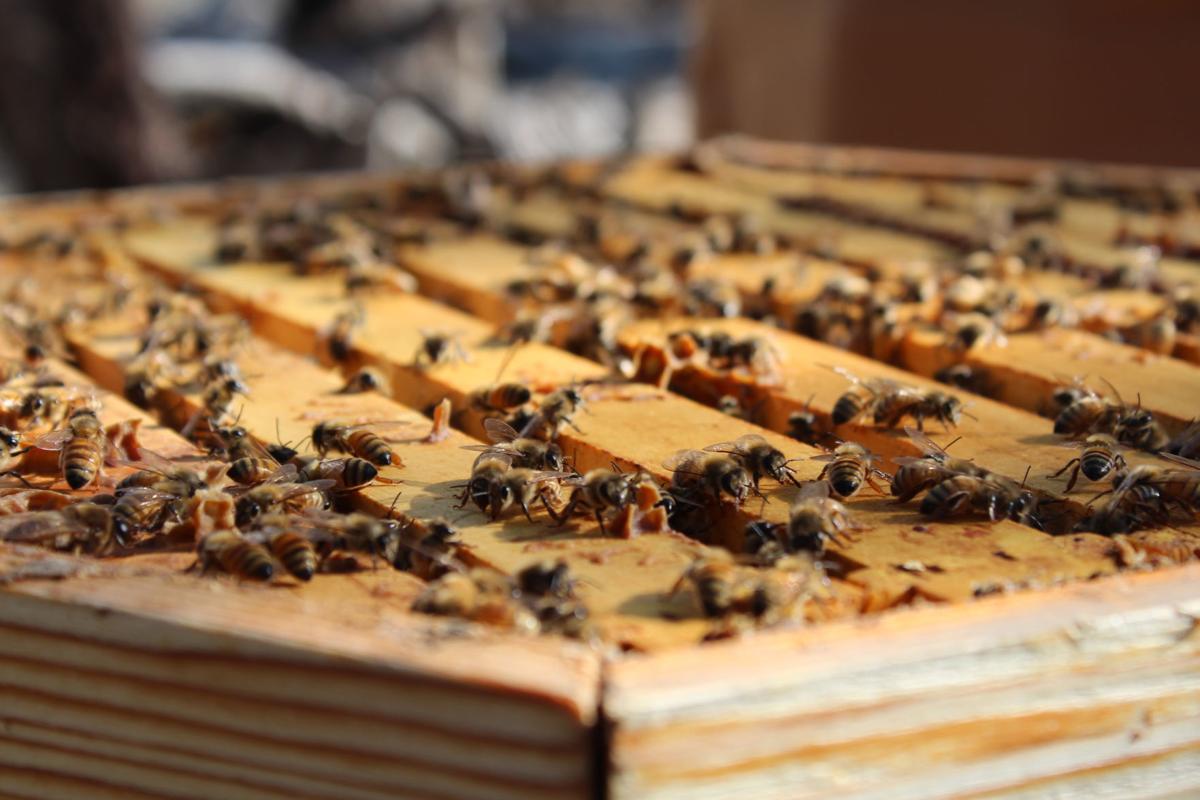 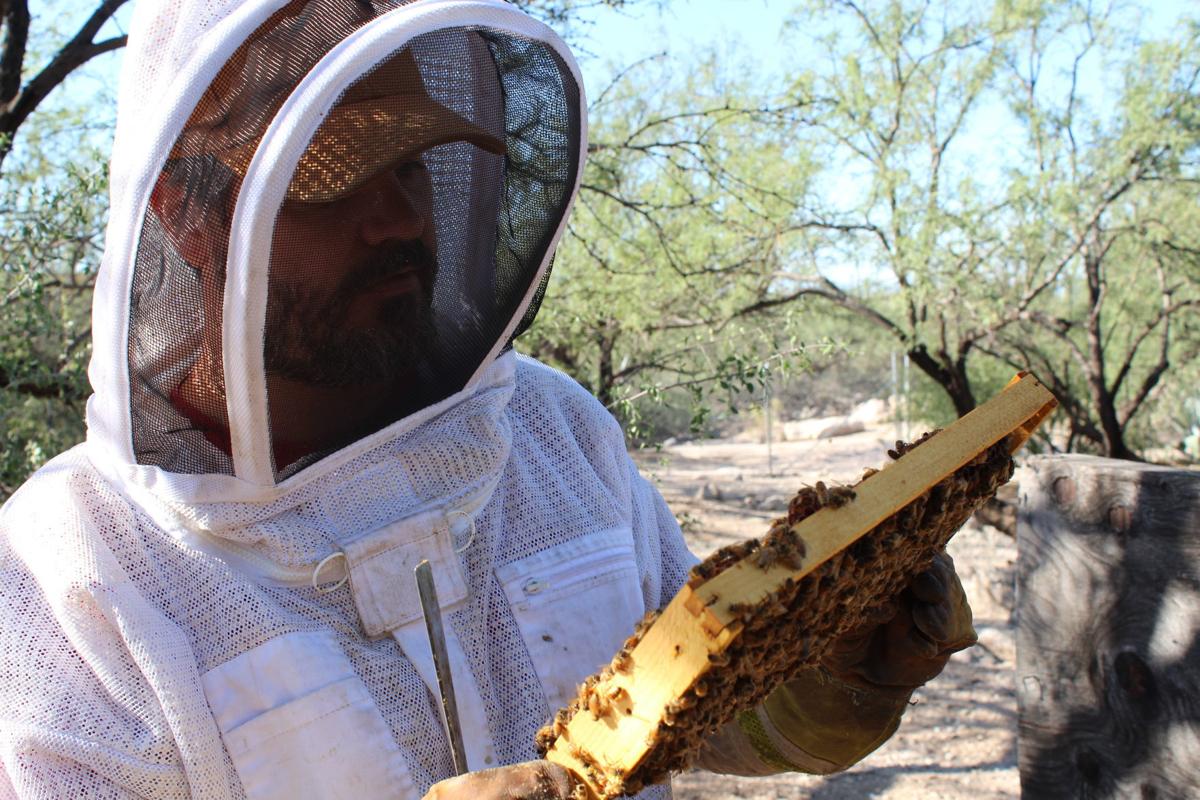 This map shows the identified regions that face mismatch between wild bee populations and crop demand. Pinal County has a critical need.

Entomologist Kathryn Busby shows her collection of native bees in the University of Arizona. (Photo by Kaite Fletcher/Arizona Sonora News)

TUCSON — A native bee wraps its hind legs around a flower and vibrates its wings to unlock the flower’s hidden treasure –pollen. Its fuzzy body coated in yellow, the bee flies off to discover its next pot of gold.

This technique of shaking the flower’s pollen sacs, is called buzz pollination. It’s exclusive to wild, native bees and cannot be done by domesticated honeybees. The nation’s buzz about bee decline often forgets these key pollinators.

A top producer of the nation’s fruits and vegetables, Arizona farmers could take a major hit if native bee populations continue to decline.

“There are a lot of cases where honeybees cannot do the job of pollination in an agriculture setting,” said Kathryn Busby, a University of Arizona graduate student in entomology. “Certain types of plants require buzz pollination. Native bees just do it better.”

Arizona holds the highest diversity of bees in the country, said pollination ecologist Stephen Buchmann, with 1,300 species that call the state home. Honeybees represent only a small number of those species.

“People aren’t aware that native bees even exist. Like the jeweled green bees — the beautiful ones, they are all around us,” Busby said. “If you look down at a flower, you are likely to see one.”

The first study on wild bees, released in 2016, suggests wild bee abundance declined in 23 percent of the U.S., including many key agricultural regions. This creates a discrepancy between increasing crop demand and falling wild bee populations. It shows that some of the most pollinator-dependent crops have the strongest mismatch, such as apples and watermelon.

“Colony collapse is a combination of all these factors — chemicals, pathogens, mites, monoculture crops that affect honeybees,” Busby said. “All these things also affect the native bees. It is just much harder to quantify (for solitary native bees) because an individual nest would be abandoned and no one would notice.”

Colony collapse disorder, first reported in 2006, is when a majority of adult worker bees vacate the hive with the queen and immature bees still inside.

Honeybee keepers have struggled to keep up with the increasing demand for pollination services, partly because of this abandonment. Fewer bees and more demand lead to increased costs for farmers.

Lucas Schvindt, a local hobbyist beekeeper, was raised around beehives in Uruguay, where his grandfather tended to 10 hives in the countryside. Some of his bees currently sit on an alfalfa field.

Commercial beekeepers tow their beehives around the country to pollinate different crops – something that most smaller, family owned farms cannot afford. The price per hive is about $200 for a couple weeks of pollination, said Buchmann, with up to two colonies needed per acre of crops.

People have the “best intentions” to help pollinators when they start beekeeping, said Schvindt, but sometimes other native pollinators are displaced in the process. Schvindt explained how an area can be oversaturated by honey bees that can outcompete native pollinators for natural resources.

The decline of bees not only harms the natural ecosystems, but also food security and the agricultural economy that go hand in hand.

Buchmann coined the phrase, “Thank a pollinator for every third bite of food,” back in 1996 to promote his book “Forgotten Pollinators,” he said, yet recent research showed that the statistic still holds true. Thirty-five percent of food production worldwide are pollinated by bees.

There is a $200 billion worldwide industry of pollination, according to Busby, including all pollinators from bees to bats to butterflies.

Bee pollination alone adds about $20 billion in value to agriculture crops in the U.S. each year, said Busby, because between 66 and 75 percent of crops require pollination by bees. This includes tomatoes, blueberries, almonds, squash and many more fruits, nuts and vegetables that are vital to a balanced human diet. Other crops include cotton and alfalfa, which is a major source of a cow’s diet.

This is critical in Arizona, where agriculture and agribusiness make a $17.1 billion economic impact and support 77,000 jobs statewide, according to the 2016 Guide to Arizona Agriculture.

“If you really want to help the pollinators, plant flowers and local native plants for the bees,” Schvindt said.

Pollinators have been evolving with plants for 125 million years. Flowering plants radiated when bees buzzed onto the scene, evolving into the species known by modern botanists.

Climate change has created a phenological mismatch between flowering plants and pollinators, which is when the timing of a mutual relationship between two species does not coincide as before.

In simpler terms, for example, flowers bloom earlier in the warmer spring air before bees are prepared to pollinate. By the time bees are active, a flower’s pollination period has come to an end and cannot be serviced by the bees. There is also less food for the bees and their offspring.

It is a double-edged sword because if one partner becomes extinct, then the other does not have a chance for survival.

Kaite Fletcher is a reporter for Arizona Sonora News, a service provided by the School of Journalism at the University of Arizona. Reach her at kdfletcher9@email.arizona.edu.

MARICOPA — In the near-term future, Pinal County farmers will have to rely more on groundwater wells. But they hope to hang onto some Colorado…

With canals dried up, San Carlos trying to make every drip of water count

COOLIDGE — With the traditional start of the harvest season, those driving through Pinal County have likely noticed a peculiarity — there just…

MARICOPA — Growing the most superior plants in the quickest manner is the goal of high throughput phenotyping, or HTP, and that is exactly wha…

No water means no cotton on historic farm

PHOENIX — The population is rising, water is scarcer and demand for energy is growing.

COOLIDGE — Pinal County has a rich history, especially when it comes to families with a longstanding heritage in farming and agriculture.

Local victories vs. cotton pests are shared around the world

FLORENCE — Learn to grow almost every type of vegetable in the hot Arizona desert. Put your hands in the dirt and learn by doing.

CASA GRANDE — Cotton prices remain steady this year, which is good news for farmers of the increasingly shrinking crop.

CASA GRANDE — After months of tariffs and trade wars, local experts say Arizona agriculture is being impacted by low prices and uncertainty ab…