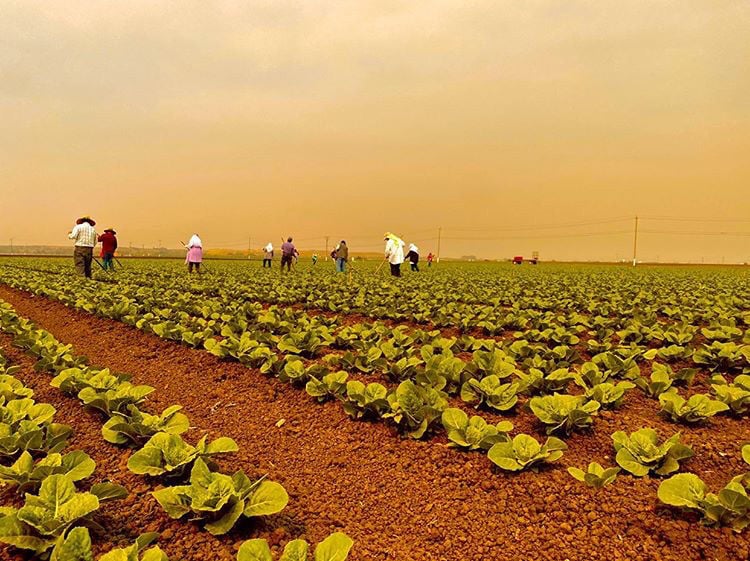 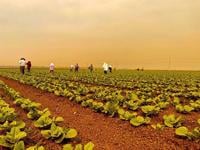 A lettuce harvester in Salinas, California, shares a photo of the working conditions many farmworkers are facing. 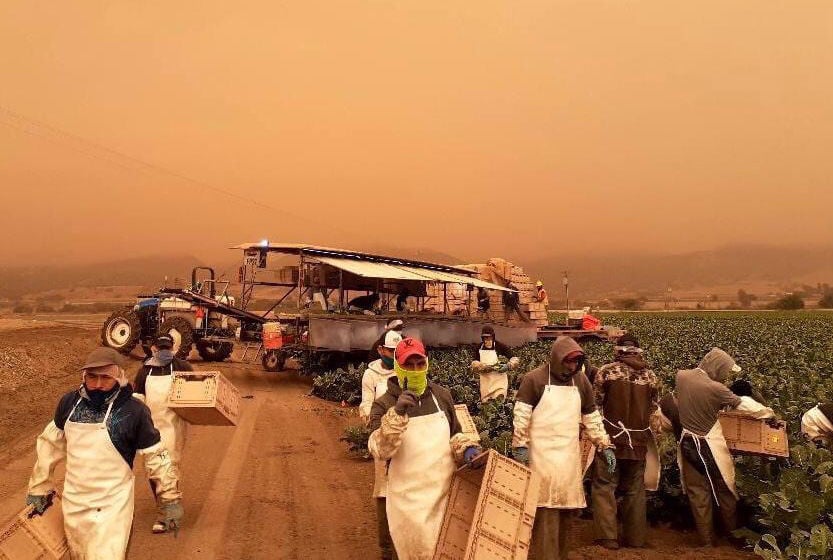 A lettuce harvester in Salinas, California, shares a photo of the working conditions many farmworkers are facing.

LOS ANGELES — The timing has been terrible for California farmworkers in 2020: wilting heat waves, wildfires spewing acrid smoke across the state and the persistent threat of COVID-19. This triple threat looms large over the lucrative fall harvest of grapes and almonds, which for some seasonal laborers is the busiest time of year, until November.

Kent E. Pinkerton, a leading expert in farmworker health, has been worried about such a threat for a decade. The pandemic, which is expected to linger in California for months, could be an invisible killer in the fields.

“It is extremely difficult for those workers to be able to social distance themselves, and so I think it is incredibly important that the workers and those who are supervising the workers take into account some of the things that they can do to protect the workers from potentially becoming infected with coronavirus,” said Pinkerton, who is the director of Center for Health and the Environment and a professor at University of California, Davis.

Farmworkers say they’re vulnerable to the health effects of the novel coronavirus and wildfires, and have little means to seek treatment because many lack health insurance.

“Unfortunately, we don’t have insurance, and that is one of the consequences we face as farmworkers. That is why we have to be prepared,” said Veronica Mota, a farmworker for 20 years and an organizer with United Farm Workers.

Mota spoke about her children, calling them her motivation and inspiration. Her daughter, who is in college and voting for the first time, is Mota’s reminder to focus on herself.

“During high school, she was really into cross country, and she motivated me to have a will to live,” Mota said. “When you live and work in this country, you get stressed and can stop taking care of yourself in a way. But when you look at your daughter and see that she runs and crosses a whole community, you say, ‘Wow, if she can do this, so can I.’”

Mota has worked in California, Oregon and Washington, all three affected by wildfires, and has experience picking all types of fruits and vegetables. The challenges of 2020 have created exceptional frustration and fear, she said.

“We feel abandoned and like we have no support. We work honorably, and if it weren’t for the work that we do, there wouldn’t be food on the tables,” Mota said.

Heat stress and exhaustion are detrimental and life-threatening side effects of hot weather – and often unavoidable. Poor air quality harms everyone’s health, and farm work is time sensitive: Waiting for skies to clear of smoke could mean a crop rots in the fields. But that type of exposure also can harm lungs and hearts, Pinkerton said.

The coronavirus makes battling these threats even harder because keeping a safe distance while harvesting is nearly impossible.

“As advocates and an organization made up of farmworkers and their families,” said Irene de Barraicua of Lideres Campesinas, a nonprofit that advocates for the rights of female farmworkers, “we know that they live in very crowded housing, we know that they carpool to work and we know that employers are maybe at times going to do anything they can to make it safer and enforce social distancing and maybe give masks … what they don’t seem to take responsibility for is that once their workers are leaving the workplace they see them gathering in groups or getting in cars together.”

Testing positive for coronavirus strips undocumented workers of their income, particularly when they are forced to quarantine with family. Without the stimulus check or California coronavirus aid to undocumented immigrants, which was first come, first served, many undocumented workers are left with little assurance. Often, for fear of losing work, many workers whose crew may have a small positivity outbreak move to the next farm, de Barraicua said.

California grew more than a third of the vegetables and two-thirds of fruits and nuts in the country during the 2019 crop year, according to the California Department of Food and Agriculture. The state accounts for more than 13% of the nation’s total agricultural value and is the leading state for cash farm receipts, according to the department.

In many parts of California, it is peak harvest season for the state’s leading crops. From the end of August through November, wine grapes, almonds and other mid-to-late season fruits are ready to harvest. In 2019, California’s top producing commodities were $6.09 billion in almonds and $5.41 billion in grapes, according to the California Department of Food and Agriculture.

Although big cities report bigger COVID-19 numbers, 98% of American rural counties have reported positive cases and 75% have reported one or more deaths as of Sept. 21, according to the National Center for Farmworker Health. In nonmetropolitan areas, there have been 812,853 cases and 18,371 deaths reported as of Sept. 22, according to data obtained from Johns Hopkins University.

Fruits, nuts and vegetables are only part of California’s farming industry. One of the most significant coronavirus outbreaks among agricultural workers started on June 29 in Livingston, where at least 392 employees tested positive and at least eight died due to the outbreak at the Foster Farms plant, according to the Merced Sun-Star. Due to more than 700 meatpacking and food processing plants experiencing outbreaks in the U.S., beef and pork production have declined by 40% during the summer of 2020, according to the National Center for Farmworker Health.

In Arizona, where the Yuma area is a major producer of lettuce, the exact number of cases among farmworkers in Yuma County is not reported, but “143 positive COVID-19 cases in the county have occurred in or near farm labor camps,” according to the National Center for Farmworker Health. Overall, Yuma County has reported 12,664 cases and 345 deaths as of Friday, making it one of the top three counties in Arizona for cases. One known outbreak happened on Hickman’s Family egg farm, in Buckeye where five female prison inmates tested positive in June.

The pressure on these workers at the national level is tremendous, with demand for farm labor exceeding the actual number of farm laborers, said Elizabeth Strater, the director of alternative and digital organizing at United Farm Workers.

“Given the context of the labor shortage, this time of year in California, especially when you are talking about high sensitivity or high investment crops like wine grapes, there is a tremendous amount of pressure on everybody’s part to get those crops in, regardless of what the air quality is like,” Strater said.

Lideres Campesinas listed education surrounding the virus as one of the organization’s main concerns in its letter to the governor in April. This concern now extends to education about fires, heatwaves and smoke exposure. Language and cultural differences often are barriers to health information, which is concerning because undocumented farmworkers typically are more vulnerable to poor health resulting from lack of access to care, de Barraicua said.

Mota, as someone who advocates for the rights of farmworkers and organizes events to spread awareness, said United Farm Workers has done everything possible to distribute the appropriate protective equipment and educate laborers on the best ways to stay safe.

The high levels of wildfire smoke along the West Coast typically contain carbon based particles, and toxic materials or irritants might be in the smoke from the destruction of buildings and dwellings. Pinkerton said all smoke can be “an irritant and potentially injurious to the lung.” Eye and throat irritation, coughing and sneezing are symptoms related to particulate matter exposure.

Properly fitted N95 masks offer the highest degree of protection against inhalation of the particles, Pinkerton said. The maximum recommended use of N95 masks is eight to 12 hours, and they should not be worn for multiple work shifts, according to the Centers for Disease Control and Prevention.

Labored breathing is a side effect of those wearing properly fitted N95 masks, and as the mask clogs with particles over time, it may become even more difficult to breathe, Pinkerton said. He and other experts recommend work to be reduced to shorter time periods, and that it’s done in a nonstrenuous way.

Mota said many farmworkers are not offered the proper equipment to do their jobs safely.

“Because I work under a union job, it’s the union that brings those resources to the farmworkers, like me, to help us be protected in the work conditions we are in.”

The reuse of masks presents a significant risk of contact transmission from touching the surface of the contaminated respirator and can add additional discomfort to the worker when worn for too long, the CDC said.

The California Department of Food and Agriculture directs farmworkers unable to obtain personal protective equipment to contact their county Office of Emergency Services branch to provide information on lack of supplies.

Mota, who has appeared in a campaign advertisement and has had a couple of encounters with California Sen. Kamala Harris, who’s now the Democratic vice presidential candidate, said farmworkers have received a lot of support from her.

“She focuses on the well-being of the farmworkers,” Mota said.

Strater said that United Farm Workers and Harris emphasize that there is “no worker justice without climate justice.” The impacts of climate change may alter the path of agriculture’s future, including the lives of workers, even though weather has always been a concern.

With climate change there will be differences in agriculture, and among those different outcomes, a shift in the social population of workers may be one of the most intriguing. Pinkerton explored the idea that workers might question their future in agricultural work.

“It could be a need to change the type of crop that is being grown, just simply because the weather is different than it has been in the past. There may be concerns about water use through droughts or desertification of lands that also creates some issues with agriculture,” Pinkerton said.

“I think also what we may see is a shift in the social population. The workers … where do they go? Where do they find work?”