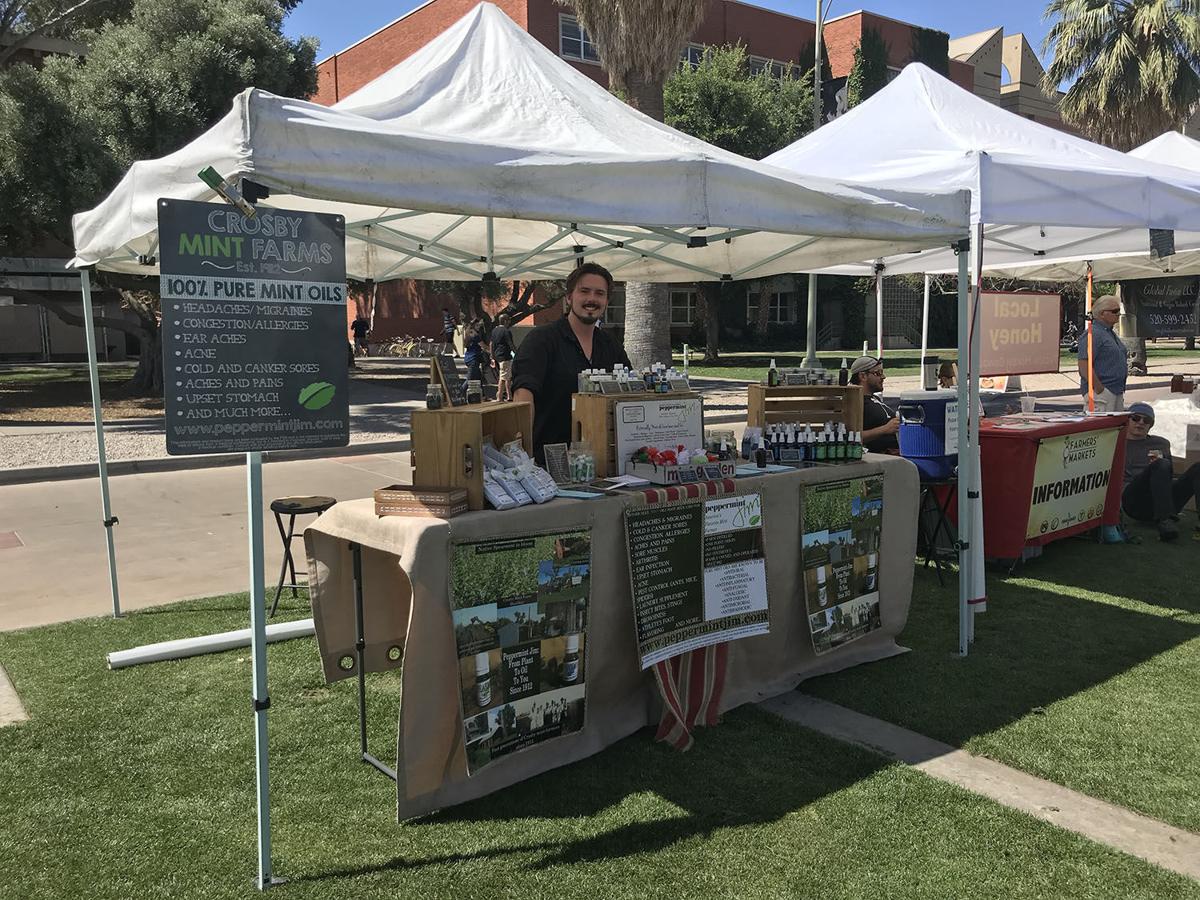 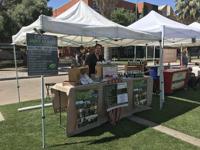 Tyler Crosby of Crosby Mint Farms mans a booth April 25 at a farmers market at the University of Arizona. Crosby’s family has operated a mint farm in Tucson for 10 years. 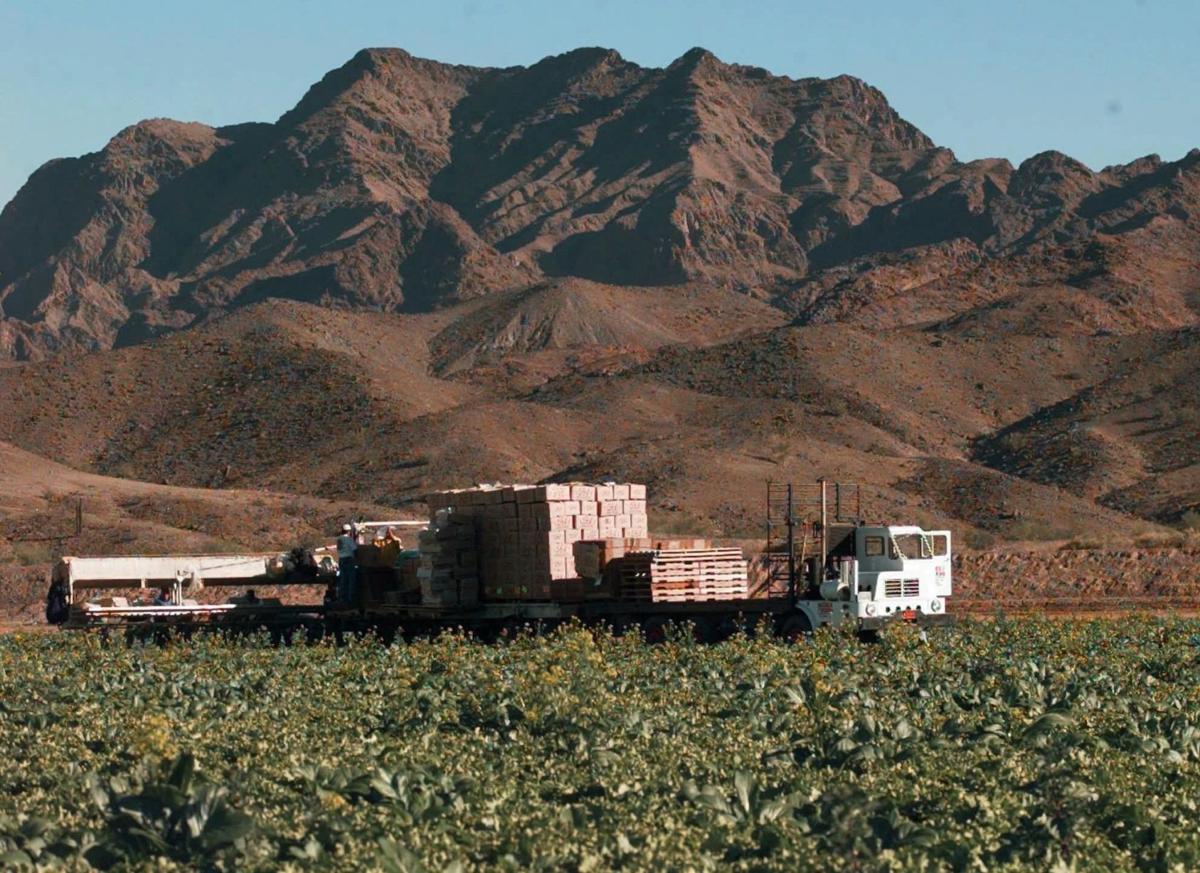 Lettuce is harvested at a farm in Wellton.

Tyler Crosby of Crosby Mint Farms mans a booth April 25 at a farmers market at the University of Arizona. Crosby’s family has operated a mint farm in Tucson for 10 years.

Lettuce is harvested at a farm in Wellton.

TUCSON — The agriculture industry has a tough job ahead of it. The United Nations estimates the world will need 70 percent more food to feed the global population by 2050.

But the real challenge lies in meeting this goal under the pressure of a changing climate. As climate change progresses, it brings an emerging set of challenges for farmers.

Arizona farmers are feeling the strain of the already changing environment.

There’s been a noticeable difference in the average temperatures, according to Michael Crimmins, associate specialist in climate science with the University of Arizona Cooperative Extension and professor in the Department of Soil, Water and Environmental Science. Phoenix and Yuma experienced their warmest years on record in 2017, according to the National Weather Service.

Local farmers such as Tyler Crosby of Crosby Mint Farms have been feeling the heat. Crosby, whose family operates mint farms in both Tucson and Michigan, said the Tucson farm produces about 60 to 70 acres of plant material grown in an outdoor, covered and enclosed aquaponics system. Crosby said the extreme heat means the farm’s aquaponics system has to use more water than it may have used before.

“That stuff (the heat) is brutal,” Crosby said. “You can protect as much as you can on it, but there’s still going to be a lot of water evaporation out of the system.”

The farm, a program of the Community Food Bank of Southern Arizona, has seen crops such as lettuce bolt earlier. Crops bolt when the plant notices warmer temperatures and starts to put its energy into reproducing and putting out flowers rather than growing, which Ortiz said can make the crops not taste as good.

As environmental conditions change, the areas suitable for certain crops may shift around the country, according to George Frisvold, UA professor of agricultural and resource economics. Frisvold said Northern states may see an increase in crop yields because the temperature will rise there. That same temperature rise will have a different result where it’s already hot and dry, like Arizona. The areas’ capability to grow some crops may change.

Crops such as wheat may not do very well if the heat continues to grow, and crops such as cotton, alfalfa and corn also could have problems, Frisvold said.

In theory, warmer weather could mean more possibilities for agriculture in cooler northern Arizona, but Frisvold points to another part of the equation: water. There is massive irrigation infrastructure that supports agriculture in certain locations, but not all over the state.

If industries have to shift to new locations, Frisvold said this could create huge costs for the new locations.

Arizona agriculture hubs like Yuma have been preparing for the changes to come. Yuma County, with one in four jobs connected to agriculture, supplies nearly 90 percent of North America’s leafy green vegetables in the winter, according to Paul Brierley, executive director of the UA’s Yuma Center of Excellence for Desert Agriculture.

The center was created from a public-private partnership with agricultural producers nearly four years ago to find solutions to agricultural needs through scientific research. One such project is the center’s research on plant diseases, an agricultural threat that could challenge farmers as the changing climate shapes weather patterns.

Brierley said changes in temperature or moisture in the environment could lead to plant diseases and diseases happening at different times of the year that farmers haven’t seen before.

“Plant disease is one of the biggest hindrances to maximizing production, and if the climate changes, then the disease pressures change,” Brierley said.

That’s not the only challenge Yuma faces. A shortage in the region’s water supply is Brierley’s biggest concern.

Like much of Arizona’s agriculture, Yuma farmers are dependent on surface water from the Colorado River. This water comes from snowpack in the upper basin of the river in Colorado and Utah. The water is stored in reservoirs that can supply enough water to even out climate variability over five to 10 years, Crimmins said. That means local droughts don’t often affect farmers’ water supply.

“We can have here in Southern Arizona the driest winter on record and it not really impact farmers at all because they’re using water that accumulated over the past five to 10 years in the reservoir systems,” Crimmins said.

Crimmins said climate projections show the upper Colorado River basin to be an uncertain region of the country when it comes to precipitation; it may get drier or may even get wetter. However, Crimmins said projections do show increased temperatures across the intermountain West, which could lead to a decline in the snowpack that feeds the reservoirs.

These projections have spurred Yuma’s efforts in increasing water efficiency. Brierley said the region uses 18 percent less water than it did 40 years ago, with some crops now twice as productive. Farmers incorporate water-saving techniques like leveling their fields every year to ensure less water runoff and using sprinklers to water seeds during their germination instead of using more water-intensive flood irrigation, Brierley said.

Even with this success, Brierley cautions against all farms following exactly in Yuma’s footsteps.

“There’s lessons to be learned from Yuma, for sure,” Brierley said. “But agriculture is not a one-size-fits-all. It’s very dependent on local conditions.”

It’s also dependent on the type of agriculture. Crimmins said agriculture like ranching, which is not irrigated, is dependent on precipitation patterns and could be affected by increasing temperatures.

Growers have found that their trees and vines are starting the growing season earlier in the year, which could be an issue depending on the last spring frost, according to Jeremy Weiss, a research scientist with Cooperative Extension in the UA School of Natural Resources and the Environment. Weiss is leading a study on climate variability and changes on orchards and vineyards in Arizona and New Mexico as part of a larger climate assessment for the Southwest study.

Weiss said existing orchards and vineyards can use adaptations to delay the bud break of the trees and vines to try to minimize the risk of a late spring freeze. For new orchards or vineyards, future climate changes can be important to keep in mind when deciding where to site the business.

“Understanding climate variability and climate change is really relevant to orchards and vineyards, and that’s because these are investments made by people where they’re expecting to have 20, 30, 40 years of productivity from their initial planting,” Weiss said.

Crimmins is confident in farmers’ abilities to adapt. Already, farmers are working with genetic strains of crop types that are adapted to heat and are moving to using more water-efficient drip irrigation.

“Agriculture is really about engineering the environment, so it’s taking that engineering approach and thinking about what it will be able to handle in longer time periods,” Crimmins said.

Ava Garcia is a reporter for Arizona Sonora News, a service from the School of Journalism with the University of Arizona. Contact her at agarcia9@email.arizona.edu.

COOLIDGE — Being in a drought is nothing new in Arizona. The current one is now in its third decade. But all evidence is indicating that condi…

PHOENIX — The pink bollworm has destroyed cotton crops in the United States for a century.