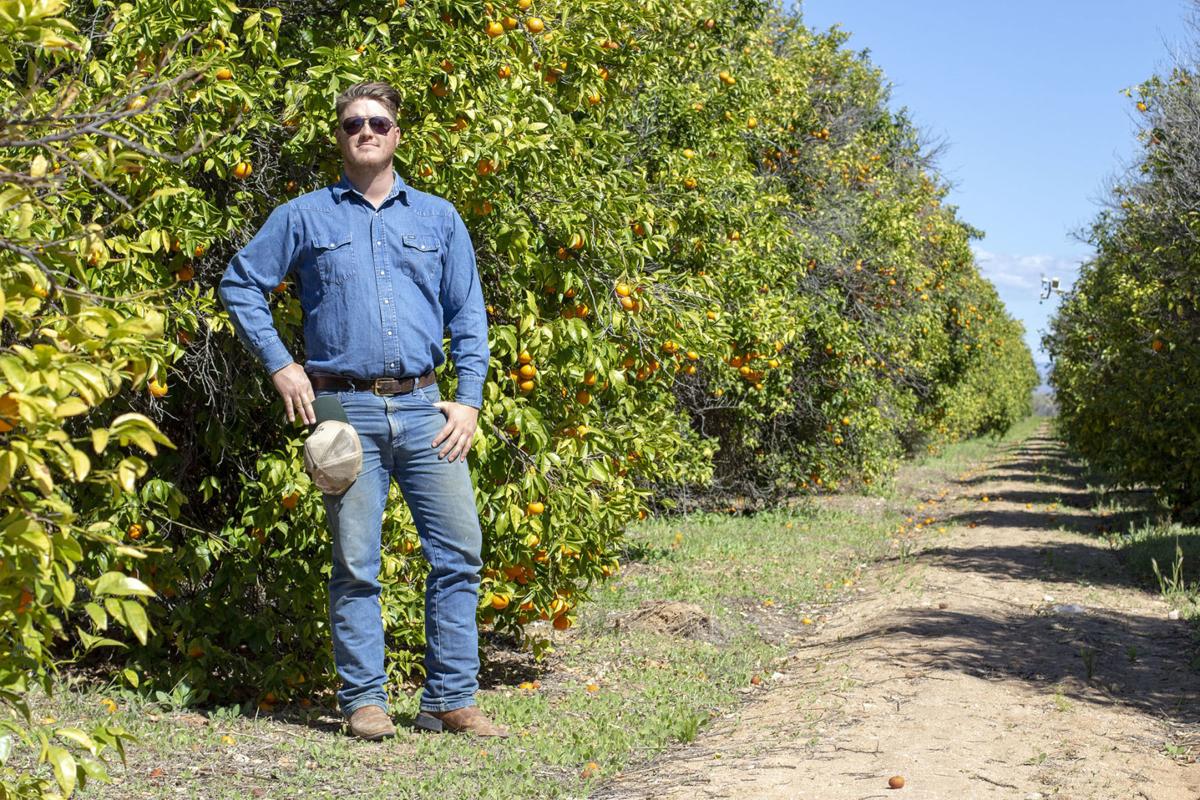 Selwyn Justice, a fourth-generation farmer in the West Valley, says he sees a future for citrus farming in the state despite development and other challenges. 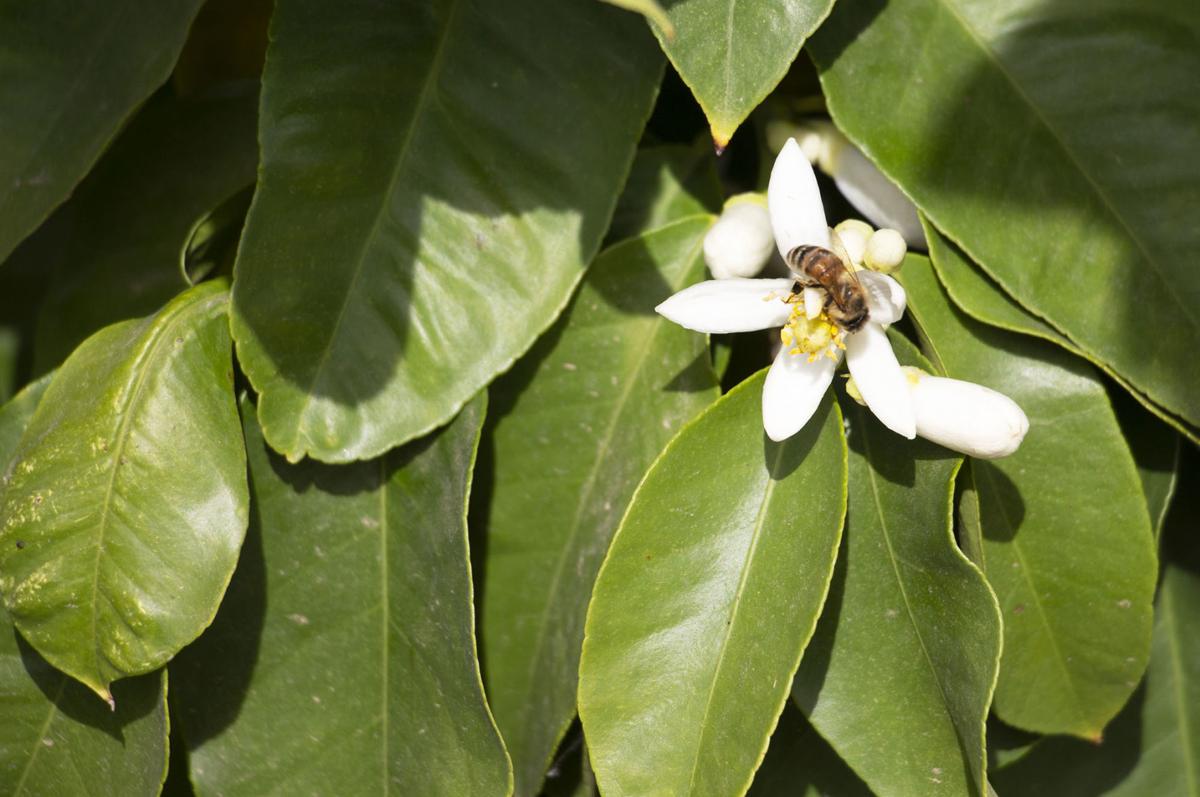 A bee on a citrus blossom at Justice Brothers farm. Citrus operations in the state, once a mainstay of the economy, fell by 40 percent from 2012-2017. (Photo by Sarabeth Henne/Cronkite News) 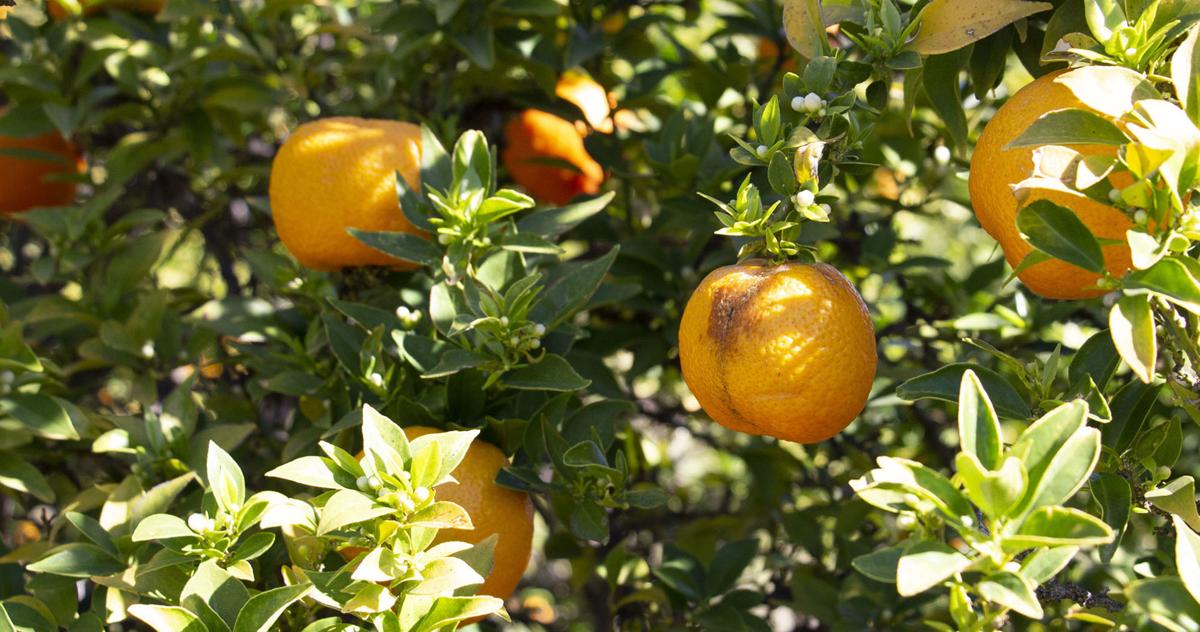 Justice Brothers grows dozens of varieties of citrus, from oranges to kumquats to grapefruit. (Photo by Sarabeth Henne/Cronkite News)

Selwyn Justice, a fourth-generation farmer in the West Valley, says he sees a future for citrus farming in the state despite development and other challenges.

A bee on a citrus blossom at Justice Brothers farm. Citrus operations in the state, once a mainstay of the economy, fell by 40 percent from 2012-2017. (Photo by Sarabeth Henne/Cronkite News)

Justice Brothers grows dozens of varieties of citrus, from oranges to kumquats to grapefruit. (Photo by Sarabeth Henne/Cronkite News)

WADDELL – On a brisk March morning, the engine of Selwyn Justice’s truck roared to life as he turned out of his driveway onto Peoria Avenue in Waddell, heading toward Surprise.

On a dirt road 15 minutes later, a cloud of dust was billowing behind him as a citrus orchard came into view. It was about 60 degrees and the morning sun drenched the trees as Justice, 30, a fourth-generation Arizona farmer, paused at the entrance of the orchard.

“We’re a vestige of the past here,” he said, digging the toe of his boot into the dirt. “Maricopa County’s presence in the citrus market is declining.”

A lot has changed since his family opened its ranch in 1928.

Between urban development, drought and disease, the U.S. Department of Agriculture reported that the number of citrus farms in Arizona has declined by about 40 percent just since 2012 – only 317 farms remained as of a USDA report in 2017.

Once considered foundational to the Arizona economy as one of the “Five Cs” – citrus, cattle, copper, cotton and climate (for the state’s tourism industry) – citrus now accounts for far less than 1 percent of the state’s $23 billion agricultural economy. In 2010, the last packing facility in Mesa, Sunkist, closed due to low levels of production.

The reduction, according to Justice, is the result of changing water costs and availability for water-intensive crops like citrus and cotton, of climate change and of the development of hundreds of citrus farms into urban sprawl.

The USDA said national citrus production declined by about 50 percent between the 2007-2008 and the 2017-2018 seasons. About 6 million tons of citrus were produced in the United States in the latter period: Florida accounted for 36 percent, California 59 percent, and Texas and Arizona made up the final 5 percent.

As he looked at his orchards, Justice was joined around midmorning by a few thousand free citrus workers: the honeybees, who sleep in late. Citrus is generally self-pollinating, so the bees are welcome as helpers, but, for the most part, the trees do more for the bees than the bees do for the trees. In a marginal economic situation, however, the extra help is welcomed by growers. Besides, Justice says, “there are certain varieties that produce better with cross pollination” from bees.

Glenn Wright, a citrus expert at the University of Arizona Cooperative Extension, agrees.

“Most citrus varieties don’t need bees – they are self-pollinating, a phenomenon known as parthenocarpy,” Wright said.

Parthenocarpy, the development and growth of fruit without prior fertilization, is common in citrus produce, but that doesn’t mean pollination is a lost cause. Pollination can still be important for some varieties, including mandarin oranges.

Cahit Ozturk is a research technologist at Arizona State University’s Honey Bee Research Lab in Mesa. He says that having a few honeybee colonies near citrus orchards can contribute to crop quality and to the quantity of fruit.

“If the plant, either fruit or vegetable, has pollen or nectar, it means they need pollinators for better production,” Ozturk said in an email.

And even for the trees that do fine on their own, Justice is happy for the bees.

“They get to cruise around and collect pollen and have a good time out here, especially in the winter months,” Justice said. “It’s kind of a layover.”

On weekend mornings, Justice is awake by 6 a.m. and is at the orchard by 7:30. On a good day, he leaves by 4 p.m. The honeybees, in dozens of white box hives in a shaded clearing, take off work about the same time.

While the future may seem bleak, Justice sees a future for Arizona citrus. For one thing, people like it. Also, the growing popularity of “pick-your-own produce” farms lets some farmers go directly for retail dollars.

Justice, in fact, also operates Justice Brothers U-Pick, the longest continuously operated citrus orchard in the state – it was originally a University of Arizona research grove. Justice acquired the land in 2016 and just finished the second year of sales at the U-Pick.

The ranch grows dozens of varieties of citrus, from oranges and grapefruit to pomelos and kumquats. Dozens of customers show up at the orchard each weekend to pick their own fruit.

“(It’s) about as personal as people get through picking the fruit,” Justice says.

And each morning of the season, which runs roughly from December to April in Arizona, he walks down the uniform citrus rows, picking grapefruits, oranges and lemons, then swings a full bag over his shoulder like Santa Claus.

“The nice thing about farming is you get to see the literal fruits of your labor,” he says. “I can come out and look at the orchard and say, ‘Yeah, I did a good job this year.’”