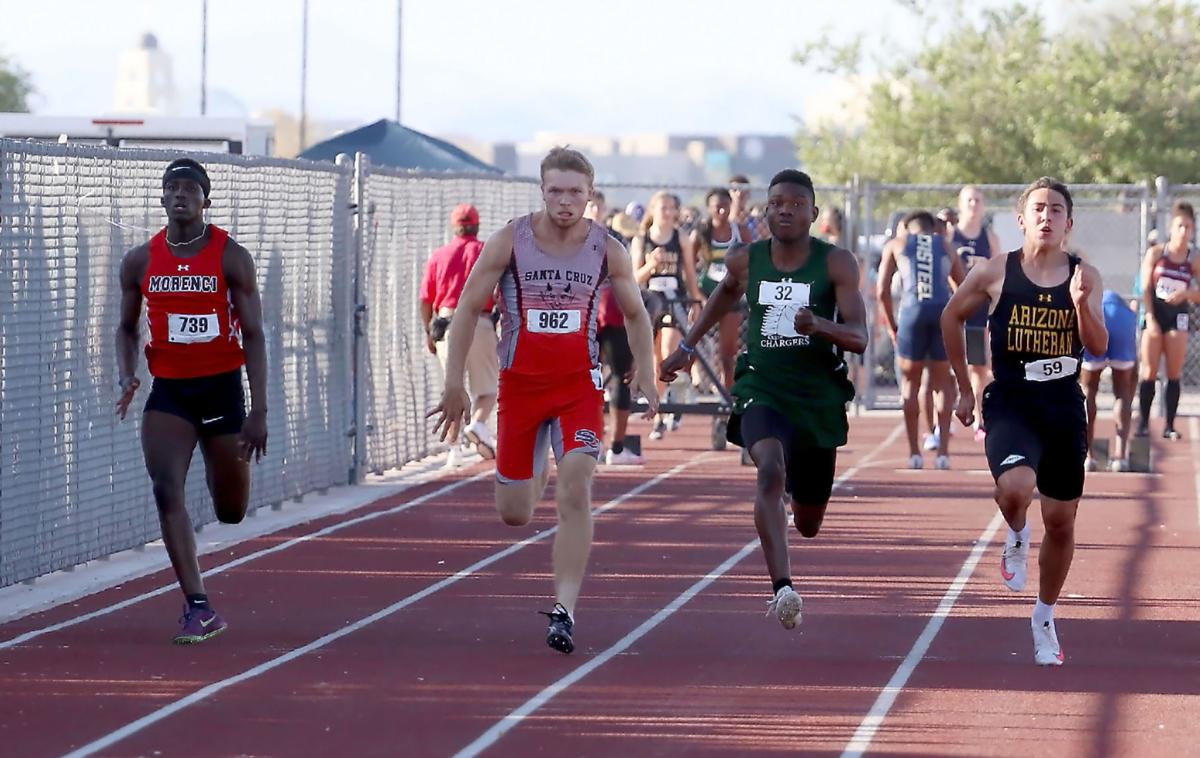 Santa Cruz’s Dylan Hukill, second from left, runs in the 100-meter dash finals Saturday, May 15, 2021, at the state meet at Perry High School in Gilbert. 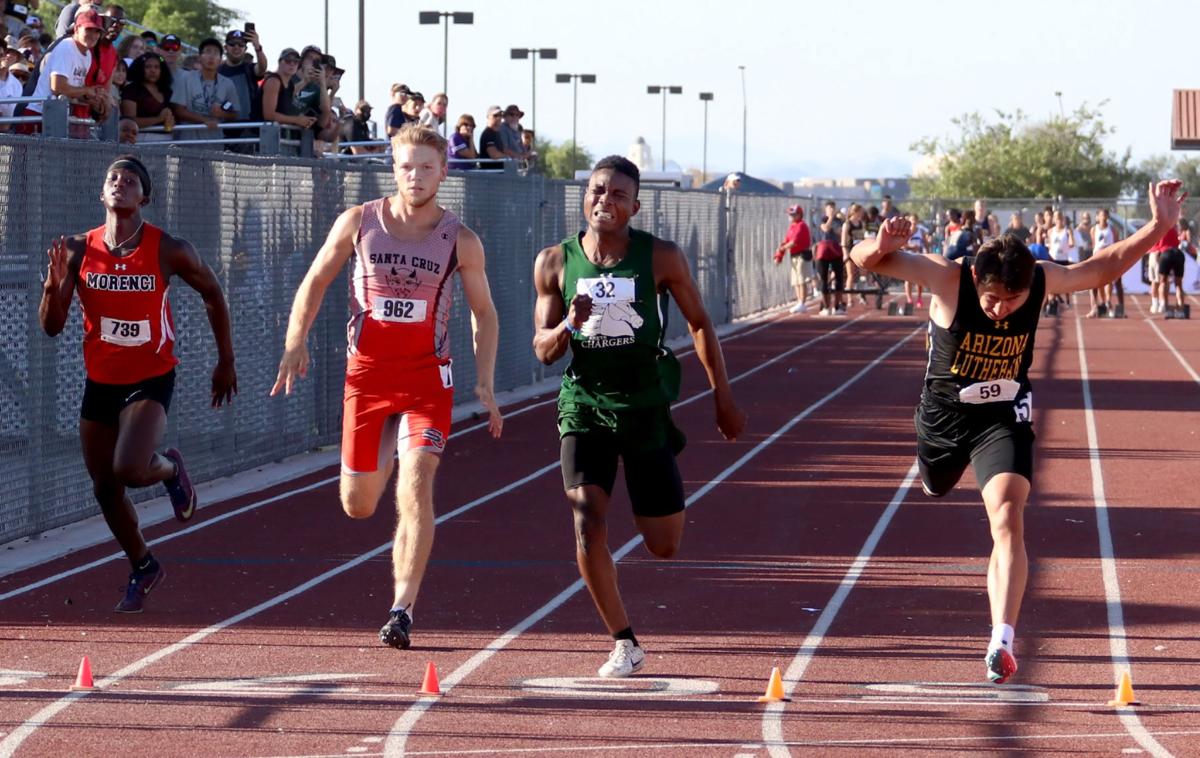 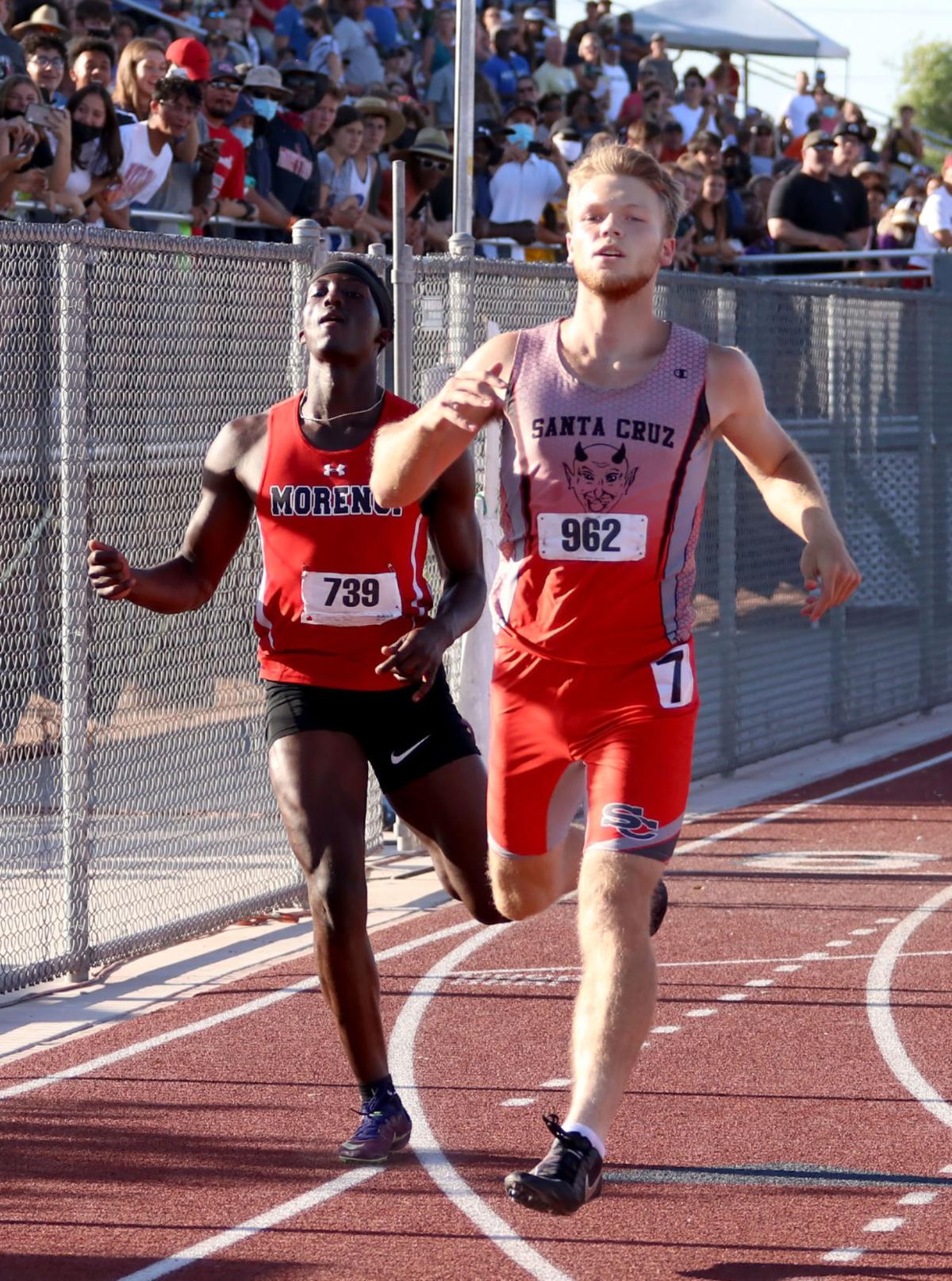 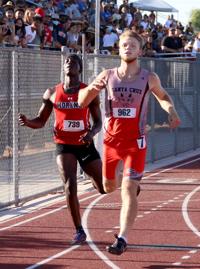 Santa Cruz’s Dylan Hukill, second from left, runs in the 100-meter dash finals Saturday, May 15, 2021, at the state meet at Perry High School in Gilbert.

GILBERT — It’s safe to say that high school athletes who participated in spring sports grabbed the bull by the horns this season after last year’s spring season was dramatically cut short due to COVID-19.

At that time, two other Dust Devils had also met the provisional mark but as the season continued, their placement on the qualification list shifted.

In the end Hukill was the only one left to represent Santa Cruz as he qualified in all four of his events for the state meet at Perry High School.

“It sucks that nobody else on my team made it, but I’m glad to be out here representing for my school, no matter how many of us there are,” he said. “It feels good knowing that I’m here representing Santa Cruz.”

Hukill told PinalCentral it felt good being at the state meet after last season was canceled.

“Luckily I made it to the finals and that’s what I wanted, so I’m just happy to be out here and competing,” he said. “It’s (been) fun, I’ve had a lot of fun this year. People think that track isn’t a sport, you do it just to run, but a lot of people actually enjoy track and I do. So it’s fun to be out here competing with everybody.”

Hukill also qualified for the state meet his sophomore season but admitted he wasn’t very good and barely made the cut.

“This was my first time actually hanging in there for state,” he said. “It feels good to finally come out here and be able to hang with everybody else. Just do my own thing and not have to worry about having to climb again like I used to, so it feels good to be out here hanging with these guys.”

The javelin portion of the state meet took place a week before all the other events on May 8, and he threw 110 feet, 11 inches.

Hukill had to pull out of the long jump, but he still managed to jump 19-8.

“I had a little mishap with my leg,” he said. “The trainer said I pulled my quad, so I’ve kind of just been taking it easy since then. All I wanted (in the preliminaries) was to qualify for the finals in the 100 and 200.”

Despite his mishap in the long jump, Hukill reached the finals in the two running events and finished fifth in the 100-meter dash with a time of 11.39 seconds. He came in sixth in the 200 meters at 23.23.

Hukill will continue his track and field career at Park University in Gilbert.

“It feels good to know that running in track actually got me somewhere,” he said. “Now that I’m actually signed with a college, I feel that I’ve accomplished what I wanted, and now I just have to keep improving on my times and set more goals for myself to obtain in the future.”