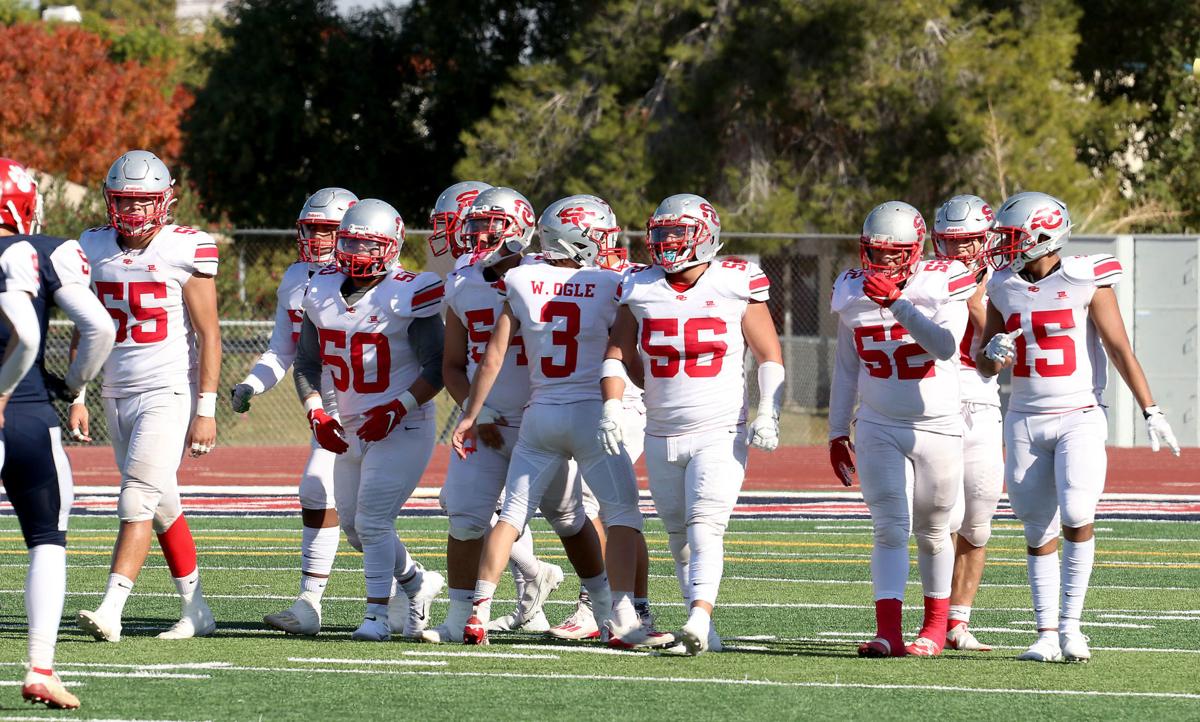 The Santa Cruz Valley offensive line walks toward the line of scrimmage during the 2A state championship game against Benson on December 12, 2020 at Scottsdale Coronado High School. 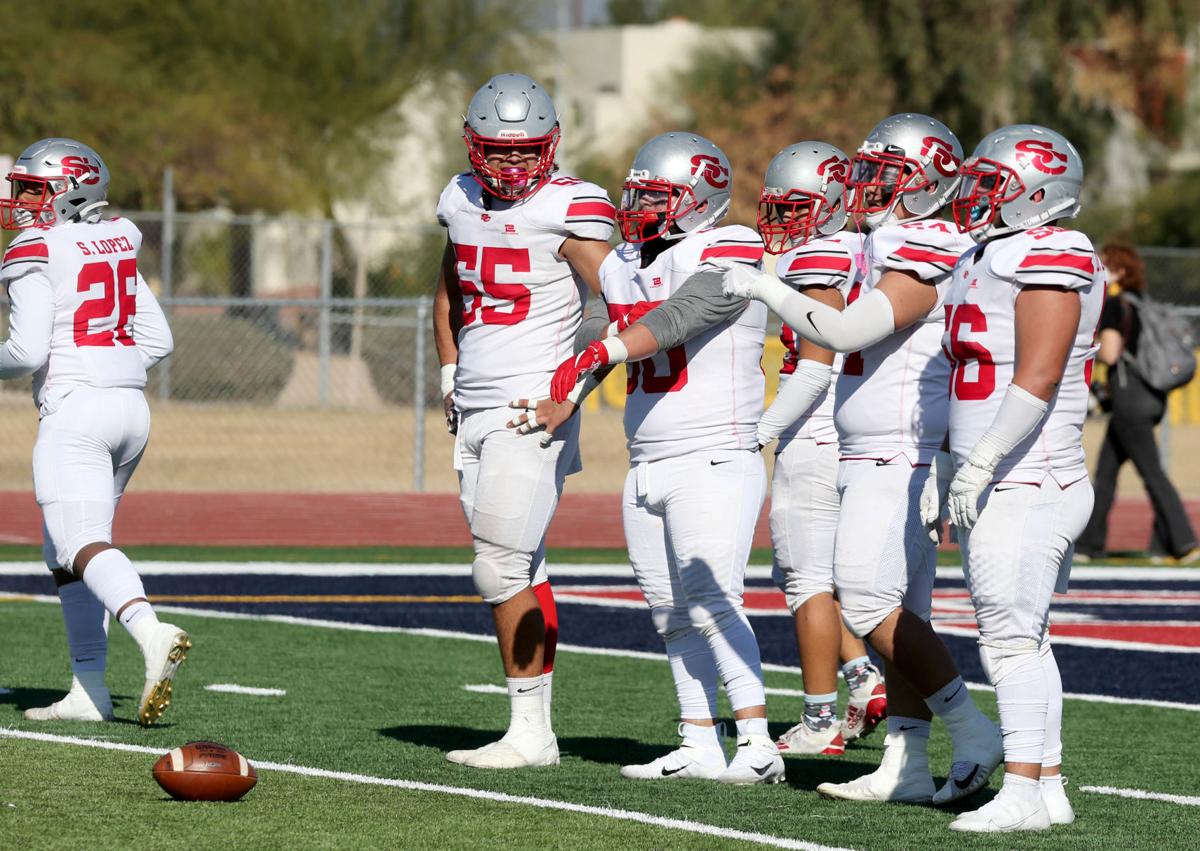 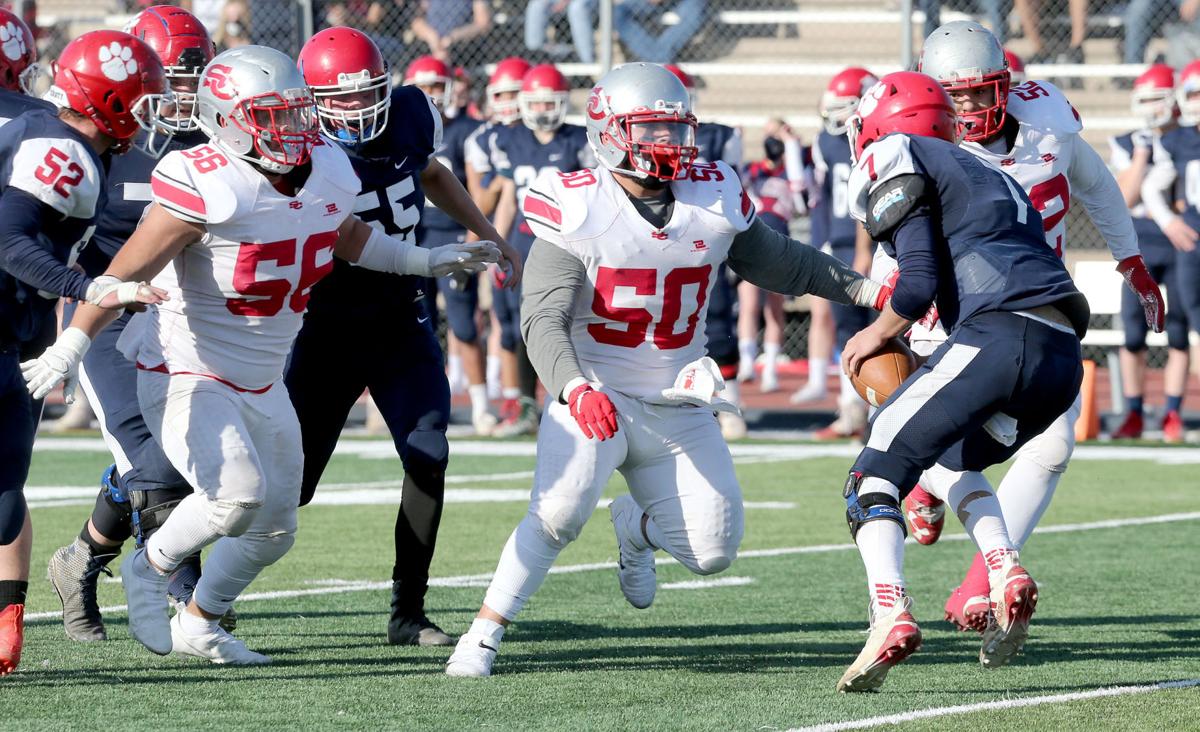 Diego and Juan Castillo-Lopez along with Robert Maldonado put pressure on Benson quarterback Brock Determan during the 2A state championship game at Scottsdale Coronado on December 12, 2020.

The Santa Cruz Valley offensive line walks toward the line of scrimmage during the 2A state championship game against Benson on December 12, 2020 at Scottsdale Coronado High School.

Diego and Juan Castillo-Lopez along with Robert Maldonado put pressure on Benson quarterback Brock Determan during the 2A state championship game at Scottsdale Coronado on December 12, 2020.

SCOTTSDALE — When a team reaches the pinnacle, the glory often goes to whoever scored the most touchdowns, or made the biggest plays. That is especially true for a team like the Santa Cruz Dust Devils, which has a player who put up the best statistical season in all of southern Arizona, and showcased all his abilities during their state championship victory.

But all that is in the eyes of the public. On these great teams, it is well known that behind every great stat line and MVP award is a group of players who do all the dirty work needed to create those gaps in the field, and to pressure opposing offenses into making rushed decisions. They must work together in the trenches, so there is little individual triumph, but when the Dust Devils lifted the trophy at Coronado High School, it was on the foundation the line has built.

To work the way it must to win the championship, the line has to work as more than just the typical teammates. They have to become something like a family, which is something two of their senior leaders know well.

“We’ve been doing everything together since we were little kids,” said Juan Castillo-Lopez, before his twin brother Diego finished his thought as they so often do. “It means everything, something awesome to share with this man right here.”

The twins — along with teammates Orlando Davis Jr., Sias Lopez, Jovan Tarango, Robert Moldonado, Elijah Tellez, Tanzor Gil, Diego Castillo-Lopez, Haloa Hall, Roman Belloc and Mauricio Lopez — are often asked to play both sides of the ball. Juan said the line often stays after practice to run sprints as a unit, taking pride in a work ethic he feels sets them apart from other units they have on Friday nights.

Getting everyone to participate in something like that comes easier when trust has been strengthened over many years. The twins might have the literal familial connection, but most of the players on the line have been together since their junior high team, and have known each other for even longer than that.

In fact, Diego remembers those junior high days as getting them ready for their big moment in Scottsdale on Dec. 12.

“Them coaches were hard on us, man,” he said. “But that’s what built the character we all have today. It was just ‘push, push, push.’ … This is for our family, our coaches and the whole community of Eloy. I hope they remember us and recognize us when they see us.”

After the game ended, media swarmed Hunter Ogle following his 244-yard, three-touchdown performance against Benson that capped off a season where he managed to get more than 2,000 yards despite a shorter season due to the pandemic. In his postgame interviews, he made sure to give his thanks to his teammates for putting him in a position to put up all those numbers.

The twins said that is typical of Ogle, who makes sure they share in the pride of his prestigious high school career. And they do.

“He gives us a lot of credit, man,” Diego said. “We never feel left behind, so we know where we stand as a team.”

Now that their time at Santa Cruz has come to an end, and in the best possible way, it’s time for the twins and numerous other members of the line to move on to their next adventures. But they know that what they experienced together in the trenches of Eloy will stay with them the rest of their lives.

“We’re more than just a team,” Juan said. “This is a brotherhood over here.”

ELOY — Santa Cruz Valley dominated its opponents all season, and it comes as no surprise tha…

SCOTTSDALE — Heading into the unpredictable 2020 football season, Santa Cruz Valley had its …

A little more than two minutes remained on the clock. Rishard Davis bent over, his face buri…

ELOY — Growing up in a small town like Eloy has its perks. “Everyone knows everyone” is what many of the locals say.