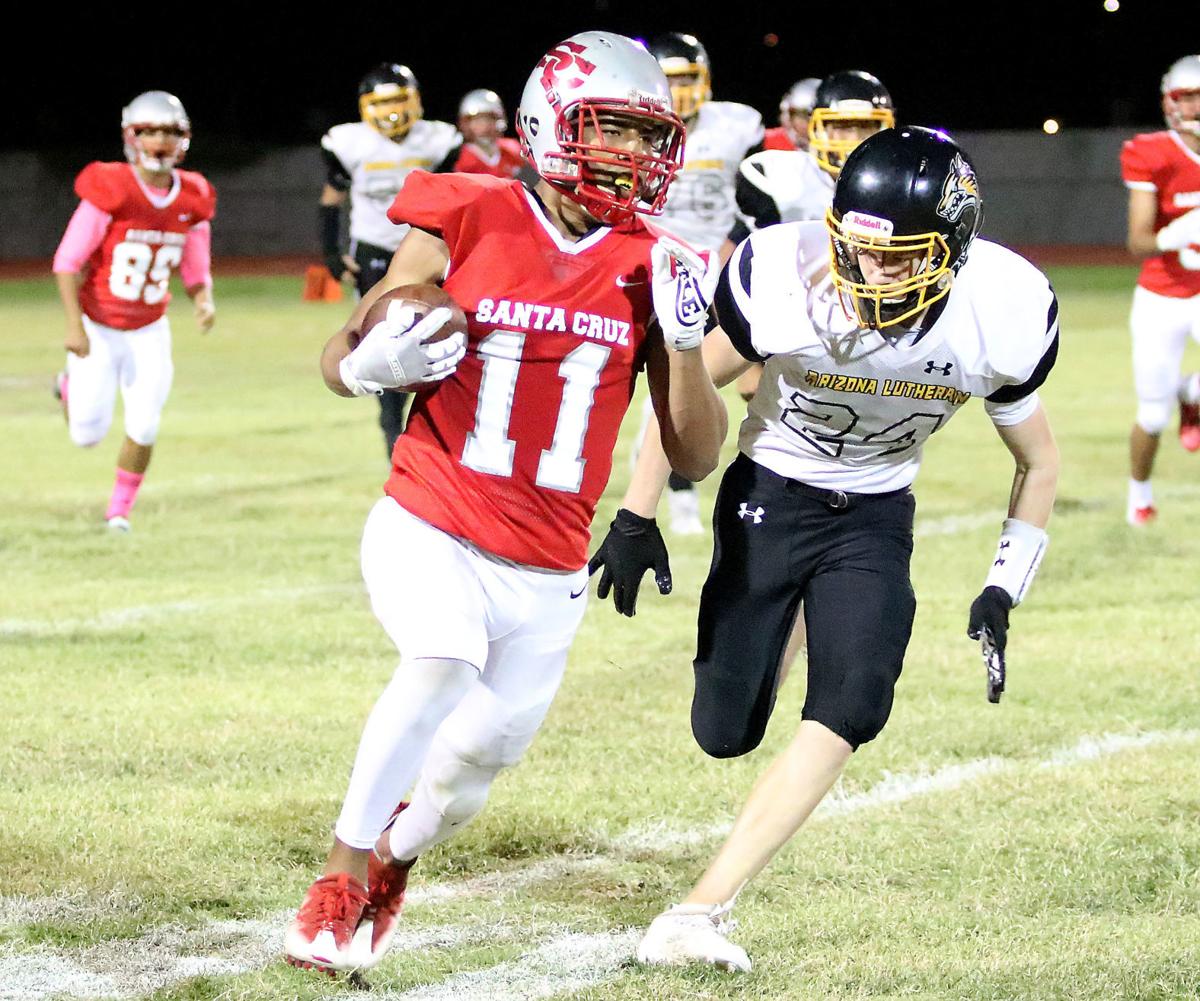 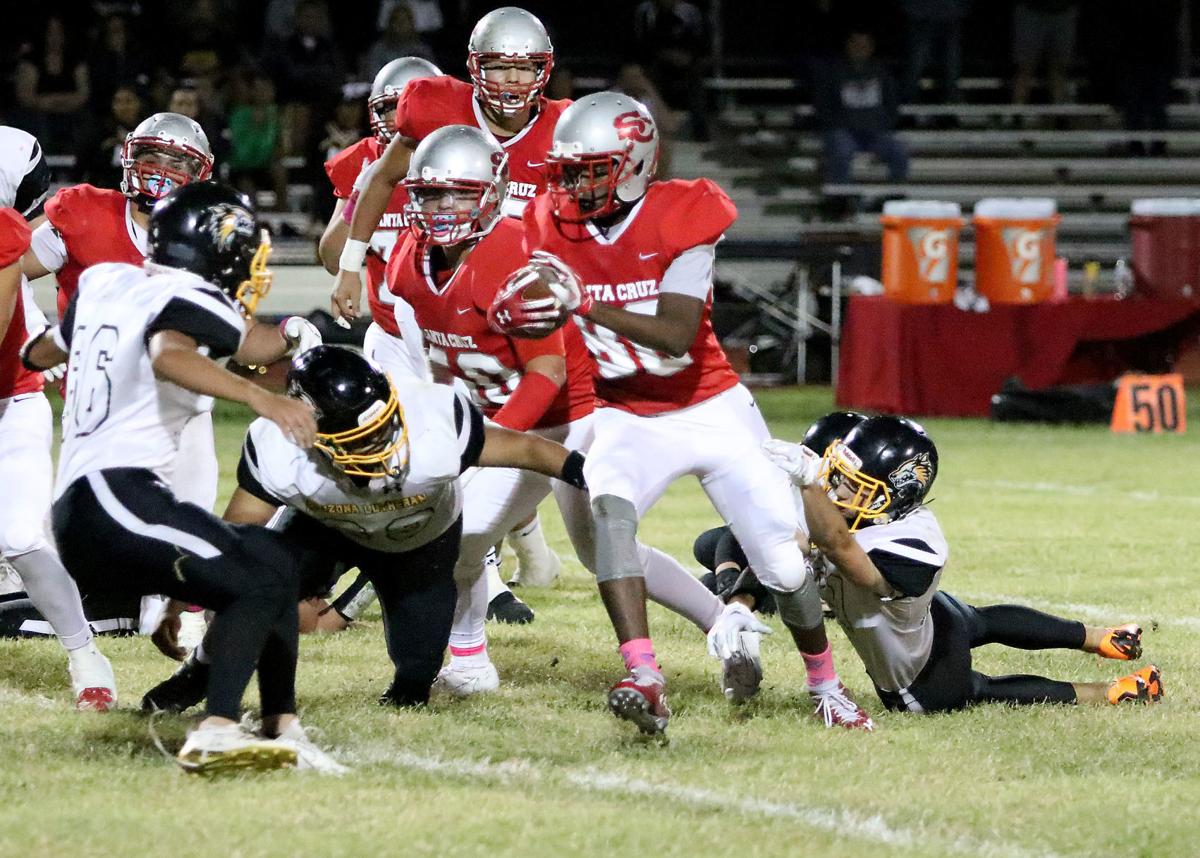 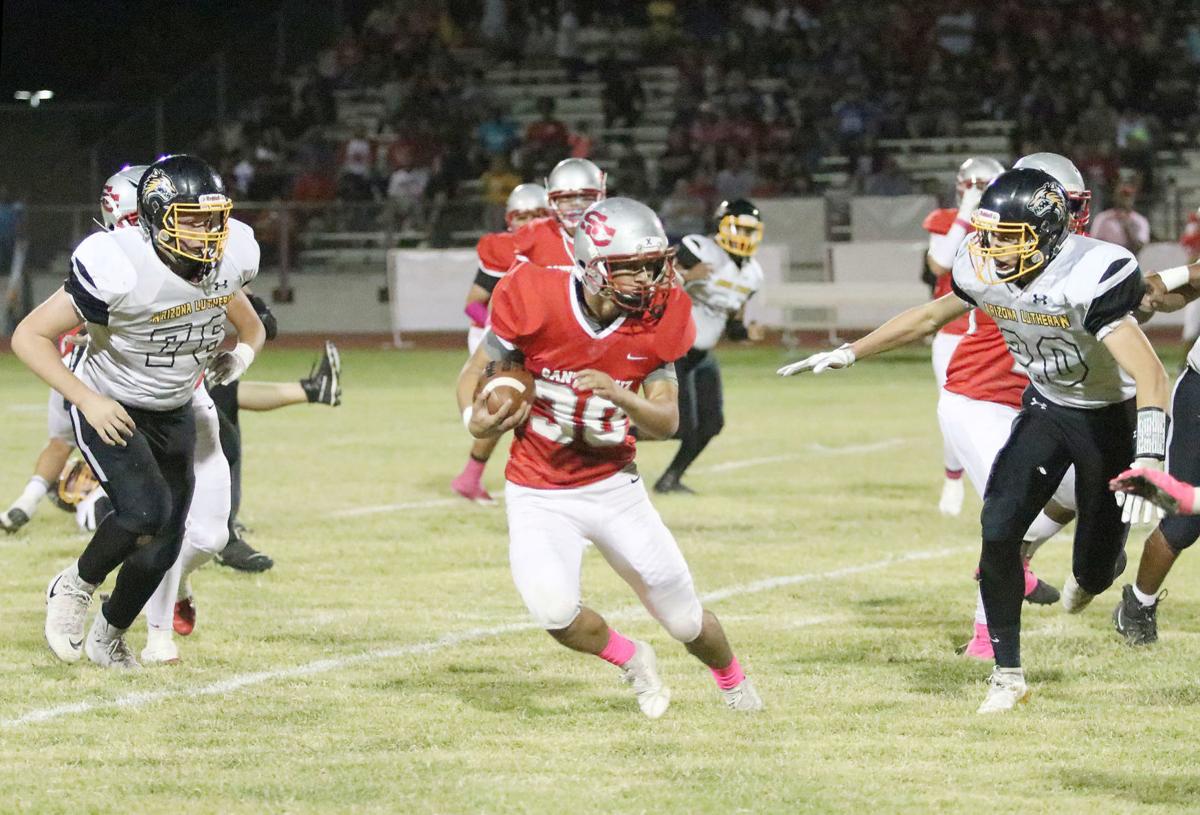 ELOY — It was an uncharacteristic start for the Dust Devils as they trailed early on at the start of the game to Phoenix Arizona Lutheran Academy.

The Coyotes nabbed the onside kick to start the game inside Santa Cruz territory. Quarterback Aaron Bode connected with Tyson Biciolis for a 29-yard completion to bring Arizona Lutheran to the 15-yard line.

The Coyotes were called for a penalty which pushed them back five yards before Maurice Chapman found Luke Grippo for the score.

During the next kickoff, Santa Cruz briefly controlled the ball before it was fumbled and recovered by Arizona Lutheran inside the 35-yard line.

Bode found Jack Shaumberg for a 34-yard touchdown to make it a 12-0, less than two minutes into the game.

"We gave up once that onside kick happened and we couldn't forget about it," said Santa Cruz coach Rishard Davis. "It took us just like like six to seven minutes to forget about it. We finally did and just started focusing on the rest of the game."

The Dust Devils finally responded as Hunter Ogle rushed for 13 yards and Steve Calvin capped off the run with a 27-yard rush.

Ogle ran it in on the two-point conversion to make it a 12-8 game.

Arizona Lutheran reached the end zone for a third time as Bode found Biciolis three times for a total of 68 yards to get the Coyotes to the 2-yard line before he connected with Schaumberg for the score with 8:41 left in the first quarter.

The Dust Devils marched down the field as Ogle had four carries for 26 yards and Calvin again finished the drive with a 7-yard score before Ogle converted the two-point run to cut the deficit 18-16.

Both teams exchanged possessions without a score. The Coyotes attempted to punt the ball on fourth down, but a bad pass led to Santa Cruz gaining the ball at the 10-yard line and ended with a Ogle touchdown run on the next play.

Next it was Calvin's turn to run in the two-point conversion as the Dust Devils took a 24-18 lead.

Santa Cruz went on to add 19 more unanswered points as Ogle had an-yard touchdown run in the second quarter with 10:53 left before the half.

The other two scores came in the fourth quarter after Calvin intercepted Bode's pass, Ogle rushed three times for 38 yards and Arik Padill scored on a 2-yard run.

The final scoring drive of the game came on a 17-second, 70-yard carry by Ricardo Alaniz.

"We know what we can do, especially running the ball," Davis said. "We feel comfortable with those three guys. If we needed it, we would call up on those guys to help us try to convert to some first downs."

Quarterback Austin Hukill sat out this game after leaving last week's game against Phoenix Christian with a knee injury and he was replaced by Anthony Clark and Wyatt Ogle.

"They just did what we expected them to do," Davis said. "I thought at times that they were trying to do too much and that's just any kid at that position — they feel like they have to be spot on every time. It was their first time having to do that. I'm glad that they stepped up. We need to give Austin some rest."

Davis made the call to sit Hukill out this game and will leave it up to him on whether he wants to play the final two games of the regular season against Scottsdale Christian and Laveen Heritage Academy or rest up for the playoffs.

"We're lucky that it's not a bad injury," Davis said. "It was our decision to give him some rest this game. I'm leaving it up to him — he said he was fine this week, but I didn't want him to overdo it. It was more my decision to sit him rather than have him come out and re-stress whatever happened to him last week."