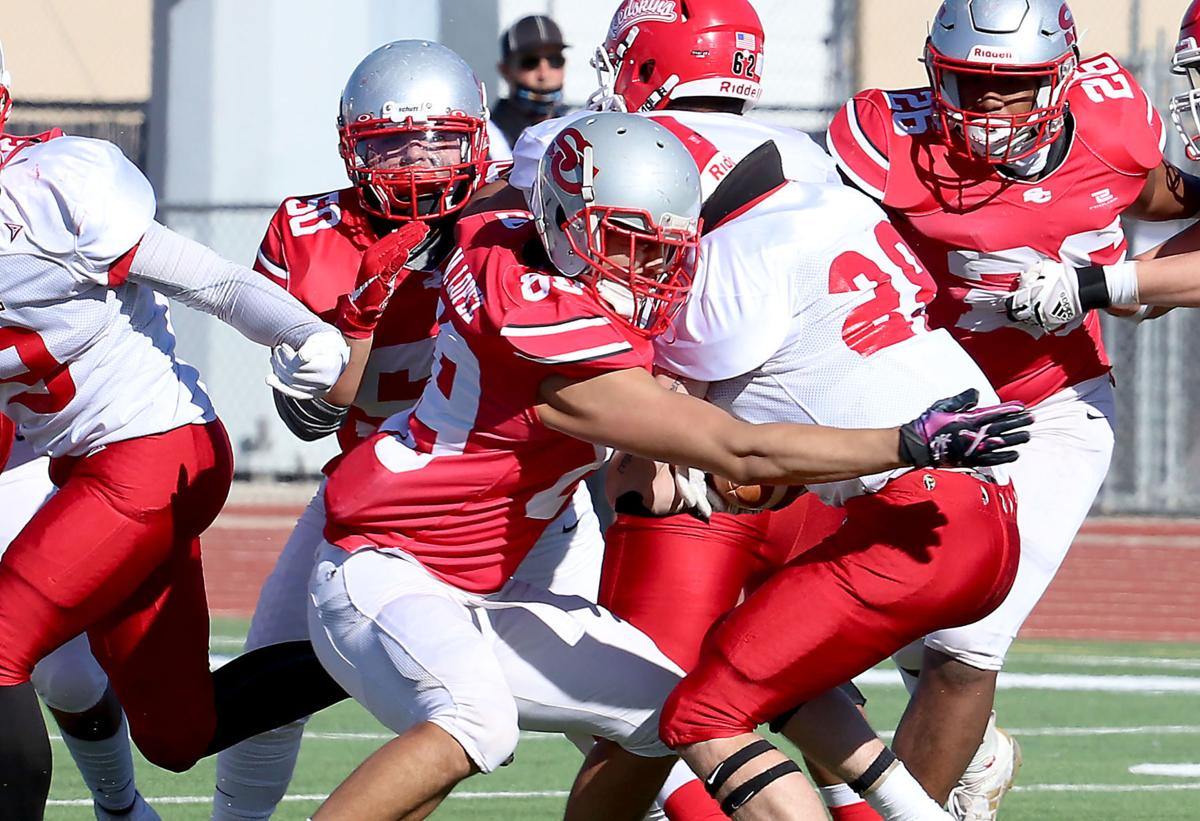 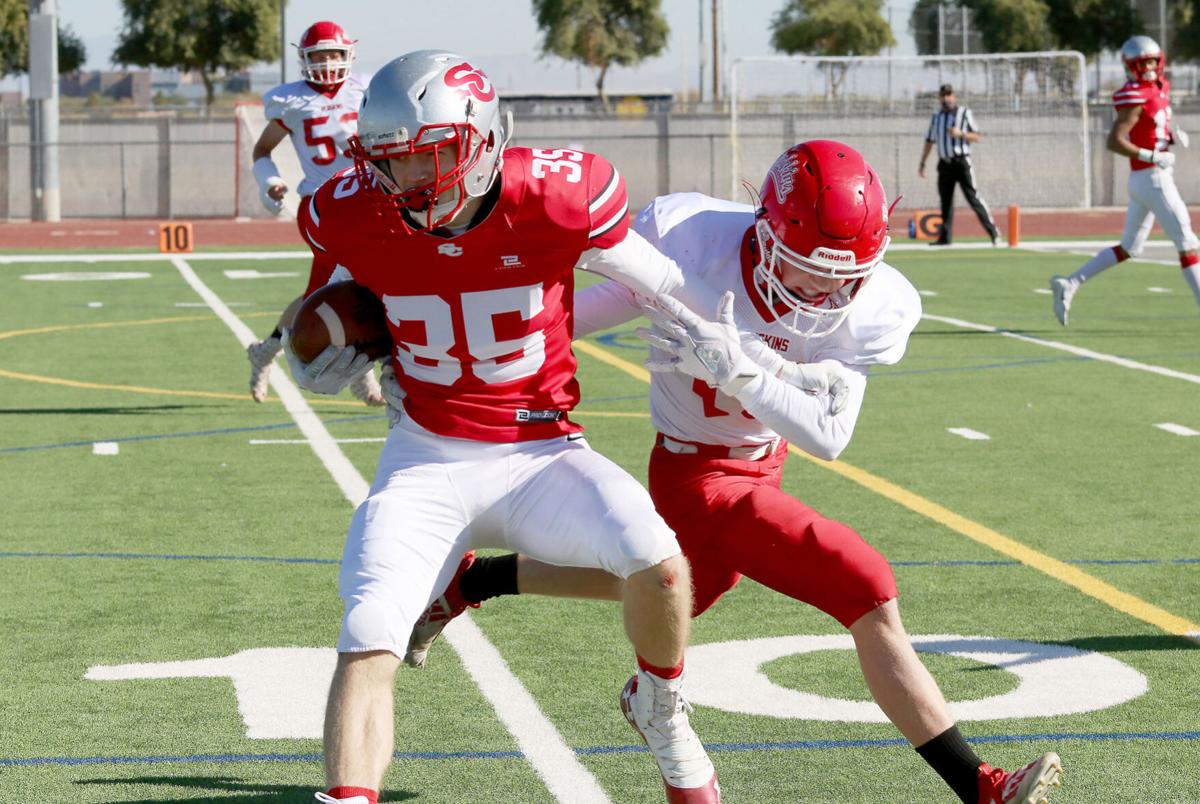 Santa Cruz Valley’s Dylan Hukill catches a pass from Wyatt Ogle against St. Johns in the 2A semifinals Saturday at Higley High School in Gilbert. 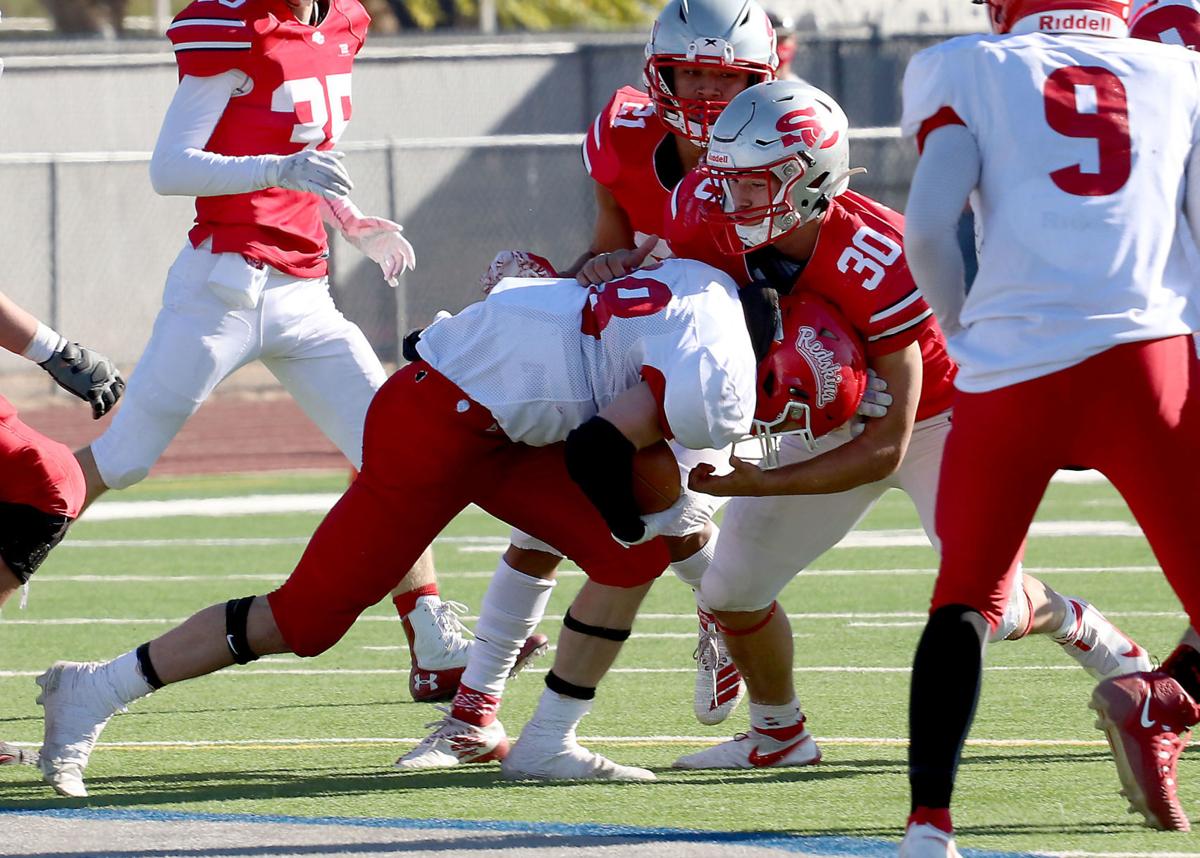 Santa Cruz Valley’s Dylan Hukill catches a pass from Wyatt Ogle against St. Johns in the 2A semifinals Saturday at Higley High School in Gilbert.

ELOY — It’s been three decades since Santa Cruz Valley won a state title in football, but it’s only been three years since the Dust Devils made it to the championship game.

It was a heartbreaker for Santa Cruz back in 2017 as it carried an undefeated record heading into the title game and had a big lead going into the fourth quarter against Thatcher before falling 28-27 in overtime.

This year the Dust Devils gave fans all they could handle in last week’s 2A semifinal against St. Johns. It briefly looked like they would fall short of reaching the championship game for a second year in a row.

Santa Cruz began the second half trailing 14-6 and found it difficult to get the big runs that it has grown accustomed to this season. There were also some defensive miscues that allowed St. Johns to find the open field.

Fortunately for the Dust Devils, their defense buckled down in crunch time, and Steve Calvin came up clutch with two big plays to bring the team back to the championship game, where they will now face a familiar foe in Benson for the 2A state title.

That same 2017 season was the last time the two teams played each other; Santa Cruz won 49-0.

According to Arizona Interscholastic Association, Benson has reached the championship game three times but has not won a title.

The Bobcats’ last appearance was in 2015 when they were beaten 27-7 by Glendale Joy Christian.

Santa Cruz coach Rishard Davis is happy his team survived and lives to see another day.

“We get another chance,” Davis said after the game against St. Johns. “Things just didn’t go our way early. We haven’t faced adversity like that, so I’m glad with how we responded.”

While Ogle leads the team with 1,852 rushing yards and 22 touchdowns, Avilez has provided some support with 299 yards on the ground and six touchdowns. He has also been the go-to guy on special teams, racking up 376 yards on kick and punt returns.

The rest of the senior group has come up with big defensive stops throughout the season and have provided holes for Santa Cruz’s run game.

“I just hope they understand that a lot of kids don’t get this chance,” Rishard Davis said. “They rarely get another chance to try again. Just (letting them) soak it in. I don’t want to put too much pressure on them, they’ve done well all season so it’s nothing extra we need to do, just stay with what we’re doing.”

The Dust Devils will face a junior-heavy Benson team including Devin Bowling, who leads the Bobcats rushing attack with 876 yards and 12 touchdowns.

Other threats in Benson’s run game include Jace Barney and Tristan Martinez, who have combined for 812 yards and 12 touchdowns.

Quarterback Brok Determan has 356 passing yards, six touchdowns and one interception. His go-to targets are Jimmy Lerblance and Angel Rigney.

Defensively the Bobcats are led by Cameron Mcfarland, who has 49 tackles and Ryan Francione, who has five of Benson’s 13 sacks. Lerblance is also a defensive threat, with six interceptions for 75 yards.

Following last week’s slow start, the Dust Devils will need to remember something their coach preached all season long last year, which is that they can’t get discouraged if they don’t get those big plays in the running game; they’re still in a good position if they can move the ball with small gains.

When asked what it will take for his team to win the title, Rishard Davis kept it simple.

“Score more points that the other team,” he said.