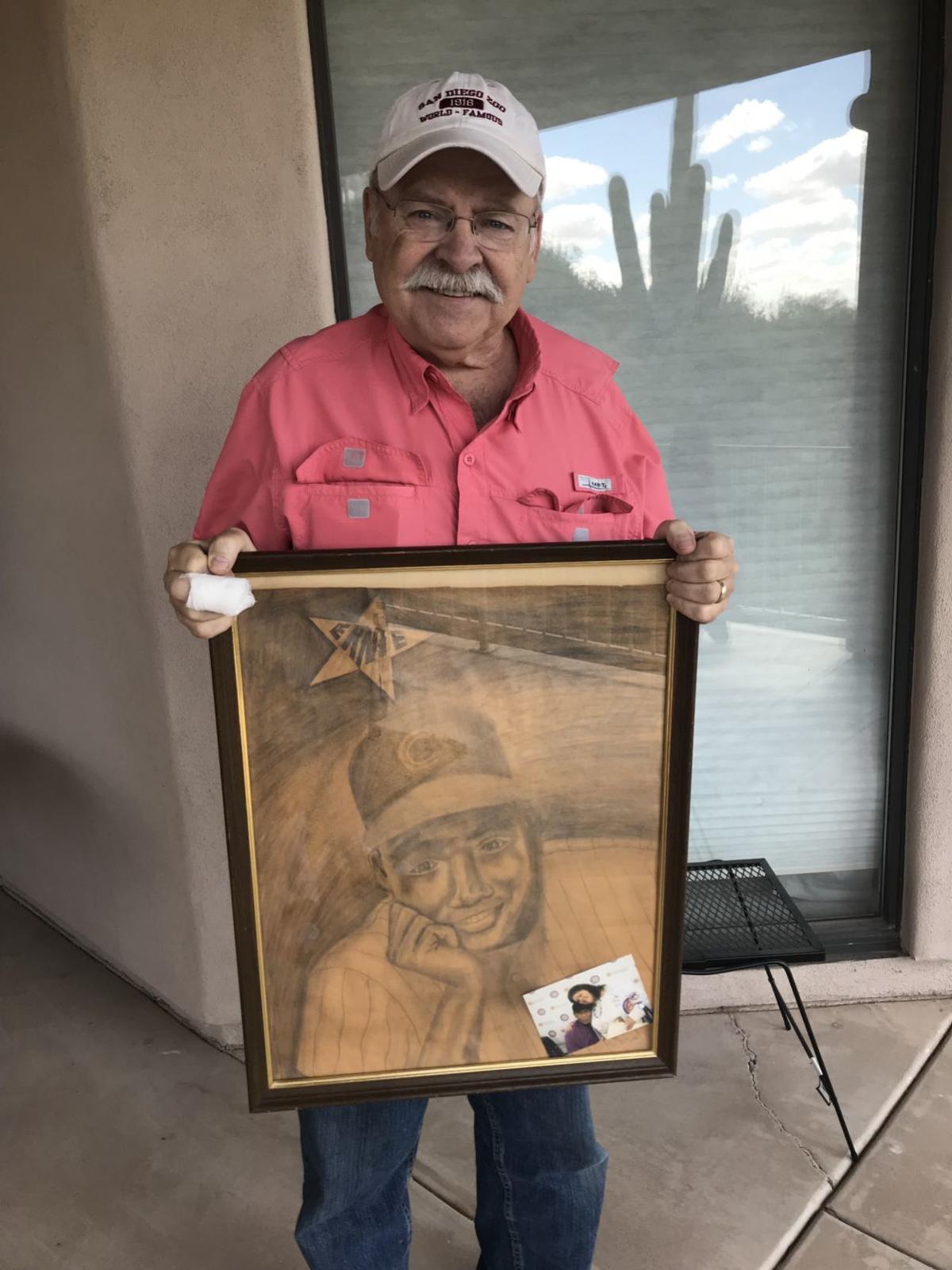 Wayne Mechenes of Robson Ranch holds the portrait he drew of Chicago Cubs legend Ernie Banks nearly 50 years ago for his friend Patty Sullivan. In the bottom right corner of the frame is a photo of Sullivan with Banks. 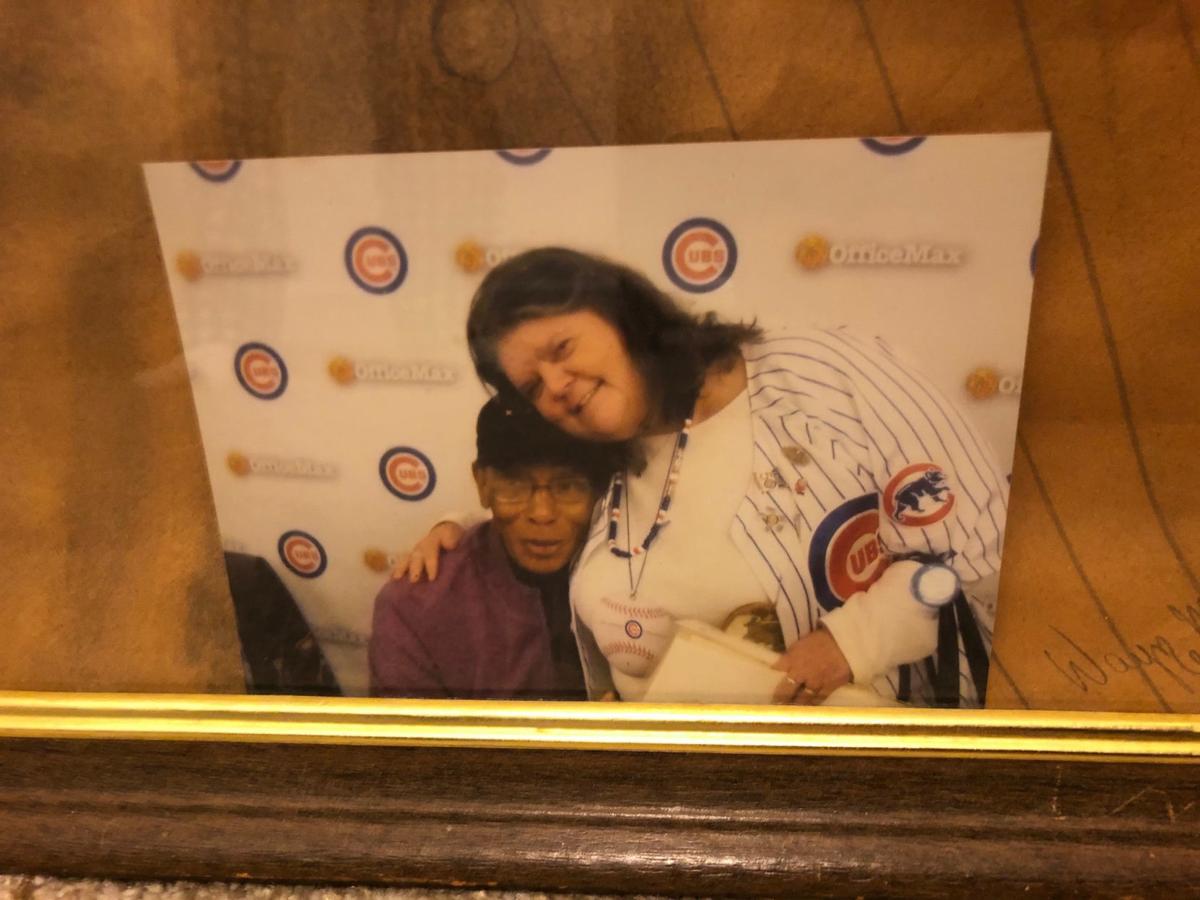 Patty Sullivan, right, embraces her baseball hero Ernie Banks at the Cubs Convention in Chicago in 2012. 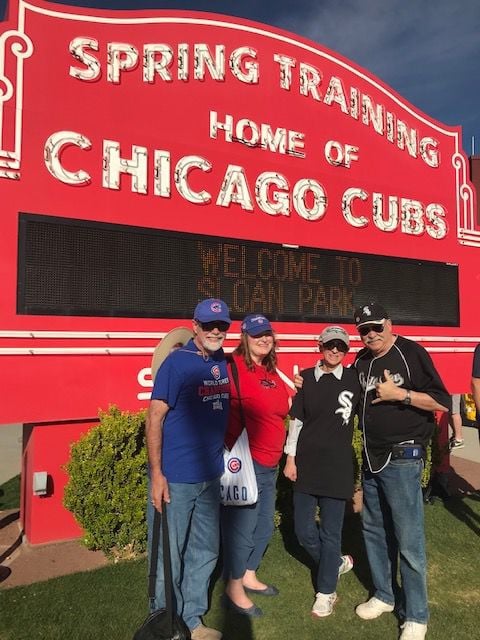 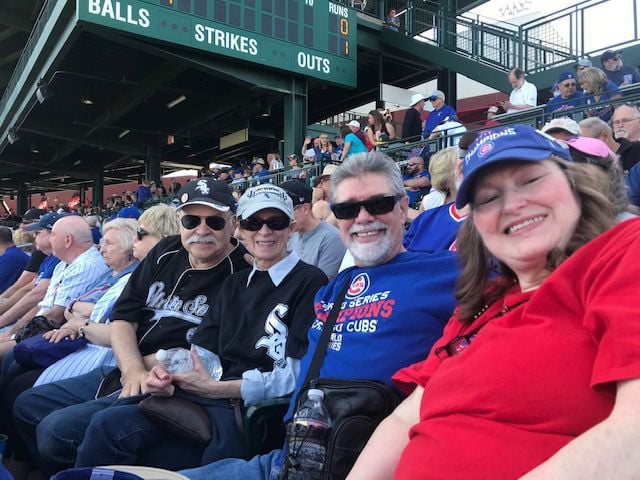 Wayne Mechenes of Robson Ranch holds the portrait he drew of Chicago Cubs legend Ernie Banks nearly 50 years ago for his friend Patty Sullivan. In the bottom right corner of the frame is a photo of Sullivan with Banks.

Patty Sullivan, right, embraces her baseball hero Ernie Banks at the Cubs Convention in Chicago in 2012.

ELOY — Wayne Mechenes and Patty Sullivan are proof that being associated with rivals can’t stand in the way of true friendship. A portrait Mechenes drew of Chicago Cubs legend Ernie Banks linked them in ways they never thought possible, even after death.

White Sox fans aren’t supposed to like Cubs fans, and vice versa. The Cubs are on the north side of Chicago, the Sox on the south side. And that geography matters. To some fans, the teams even symbolize different socioeconomic status and ideology; it’s a microcosm of identity politics.

But the passion Mechenes, a White Sox fan, and Sullivan, a Cubs diehard, had for their teams was unmistakable.

Both of them lived in the Chicago area and worked at a Sears outlet store on the city’s south side in the early 1970s.

Despite their allegiances to rival teams, the two became good friends. One day — Mechenes estimates it was 1971 — they agreed on a bet in a Cubs versus White Sox exhibition game. The Cubs won the game, and he lost the bet.

As the winner, Sullivan commissioned Mechenes to create a drawing of Banks, a two-time National League MVP who hit 512 home runs in his Hall of Fame career with the Cubs.

Mechenes frequently drew as a hobby, but buildings were his primary muse.

“She knew I liked to draw, but I had never done a portrait,” he said of Sullivan’s request. “This is the first portrait I ever attempted, and it was the last one.”

After finding a photo of Banks in a magazine, Mechenes bought a large off-white drawing pad, got some charcoal and went to work.

Gift of a lifetime

While Mechenes thought the portrait was something nice to do for his friend, he had no idea of the impact it would have on Sullivan.

“She really fell in love with it,” he said, adding she kept it above her fireplace for decades.

Sullivan was an attendance secretary at Carl Sandburg High School in the Chicago suburb of Orland Park, Illinois. She retired from that job shortly before Christmas in 2018.

Just days after her retirement, Sullivan suffered a brain aneurysm and died.

“She was a wonderful person,” Mechenes said. “She would give you her right arm.”

It happened so suddenly. And to Mechenes, the circumstances surrounding Sullivan’s death made it especially cruel and unfair.

“That’s why it was so tragic ... she didn’t get a chance to enjoy her retirement and the rest of her life,” he said.

But the joy Sullivan received for so many years from the Banks portrait is something she wanted passed on to the family of Mechenes — the artist and her friend.

Mechenes, 69, left the Chicago area and moved to Robson Ranch in October 2016. He worked as the branch chief and senior statistician for the Bureau of Labor Statistics in downtown Chicago for 36 years.

He was first introduced to Robson Ranch when visiting his sister, who already lived in the community. Mechenes thought the homes were beautiful and instantly knew he and his wife wanted to live there as well.

“We’re really loving it here,” he said. “We feel like we’re still on vacation.”

In April 2019, Sullivan’s sister, Florence, sent Mechenes a letter that detailed what Sullivan wanted to do with the portrait of Banks, a Chicago icon known as Mr. Cub.

“Patty always said if anything happened to her, you needed to get this drawing back, for your son,” Florence wrote. “Patty was honored and touched when you did this drawing for her way back when. I only hope you and your family will treasure this drawing as much as she did.”

Mechenes has two sons. Fittingly, there is a split, as the older son is a White Sox fan and the youngest is a Cubs fan. The younger son lives just a short walk from Wrigley Field.

Mechenes, who has the portrait in a closet in his Robson Ranch home, plans to give the drawing to his youngest son.

Sullivan was a Cubs superfan. She and Florence went to about 40 games a year together at Wrigley Field, as Florence and her husband have been season ticket holders for more than 20 years.

She even got to meet her baseball hero, Banks, and show him the portrait that she held so dear.

Sullivan and Florence went to the Cubs Convention every year, a large event in Chicago where fans can meet and talk to players, get photos and autographs, and players and executives take part in interactive panel discussions.

In 2012, Sullivan got lucky. They went to the convention a day earlier than usual and ran into former Cubs all-star second baseman Glenn Beckert during dinner at a steakhouse.

After hitting it off, Beckert invited the two up to the players’ lounge, where they met and talked with several players, including Hall of Fame outfielder Billy Williams.

Over that weekend, the sisters met up with the players for breakfast. Sullivan was emotionally overwhelmed when seeing Banks. Her sister had to help her stop crying. But Sullivan spoke with Mr. Cub for more than six hours, and they developed a bond.

The bond was so strong that Sullivan and Florence were invited to Banks’ funeral by Beckert and Williams. Banks died Jan. 23, 2015, just eight days shy of his 84th birthday. Sullivan and her sister attended the emotional event.

“It was sad, and we were honored to be invited,” Florence wrote.

While Sullivan’s life came to a sudden and unexpected end in December 2018, Mechenes is dealing with a health scare of his own. He was diagnosed with stage 4 stomach cancer last June, and he has been through multiple rounds of chemotherapy.

Mechenes is optimistic about winning the battle. Advances in science and medicine give him comfort.

“Thirty years ago, it would have been a death sentence,” he said. “Hopefully I’ll survive ... I’ve had a great life. If I died tomorrow, I’ve done it all.”

As for the Banks portrait, it carries much more meaning now than it did when Mechenes first drew it nearly 50 years ago. He certainly never expected it to have such a lasting impact on Sullivan.

“I didn’t anticipate that ... I was pleased,” he said of what it meant to Sullivan. “To find someone actually loved (the portrait), it made me feel really good.”

In divisive times in America and across the globe, Mechenes said the bond he and Sullivan shared, despite their allegiances to rivals — Cubs and White Sox — is symbolic of how friendship can transcend differences.

“I think that’s a message to our country right now — Democrat or Republican, liberal or conservative,” he said. “We’re all here together. We’re in this together.”