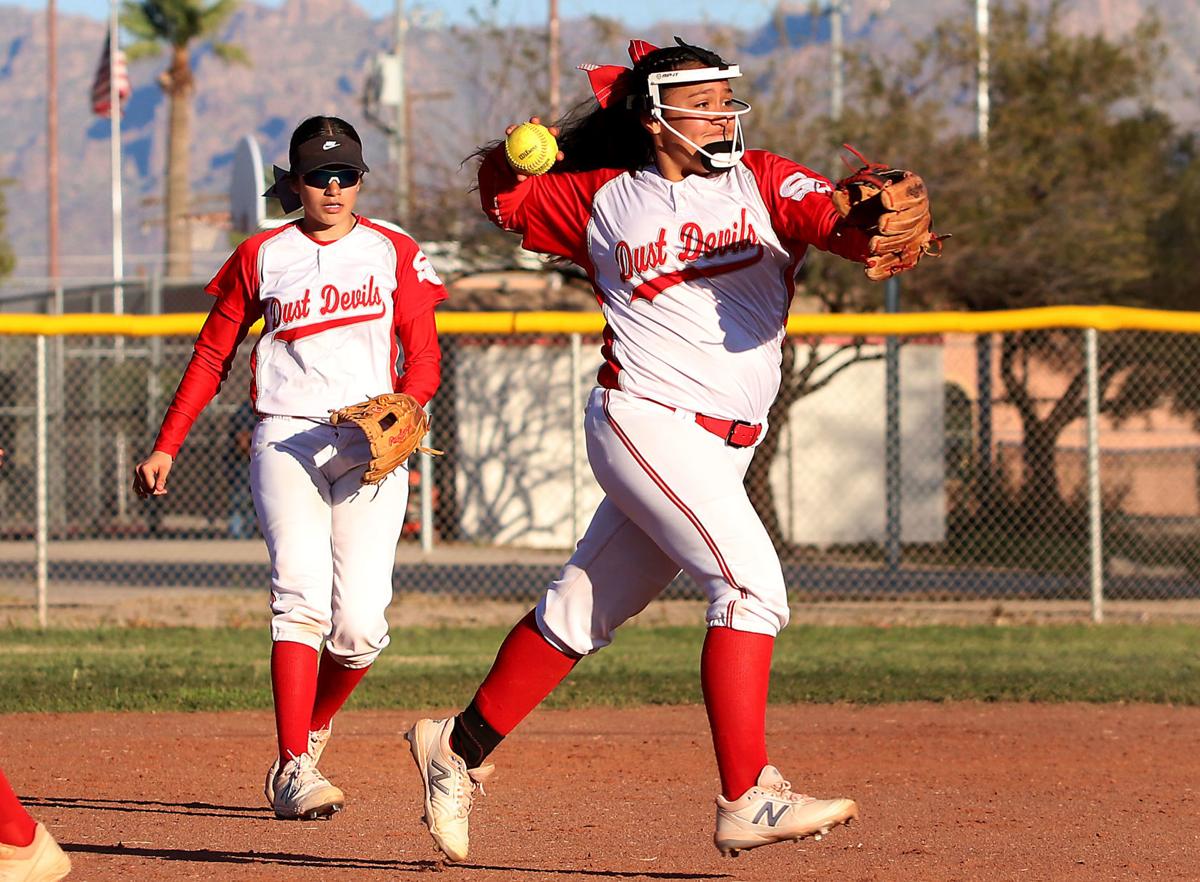 Santa Cruz Valley’s Rhaylyn Tarango throws to first base March 4 during a game against San Carlos in Eloy. 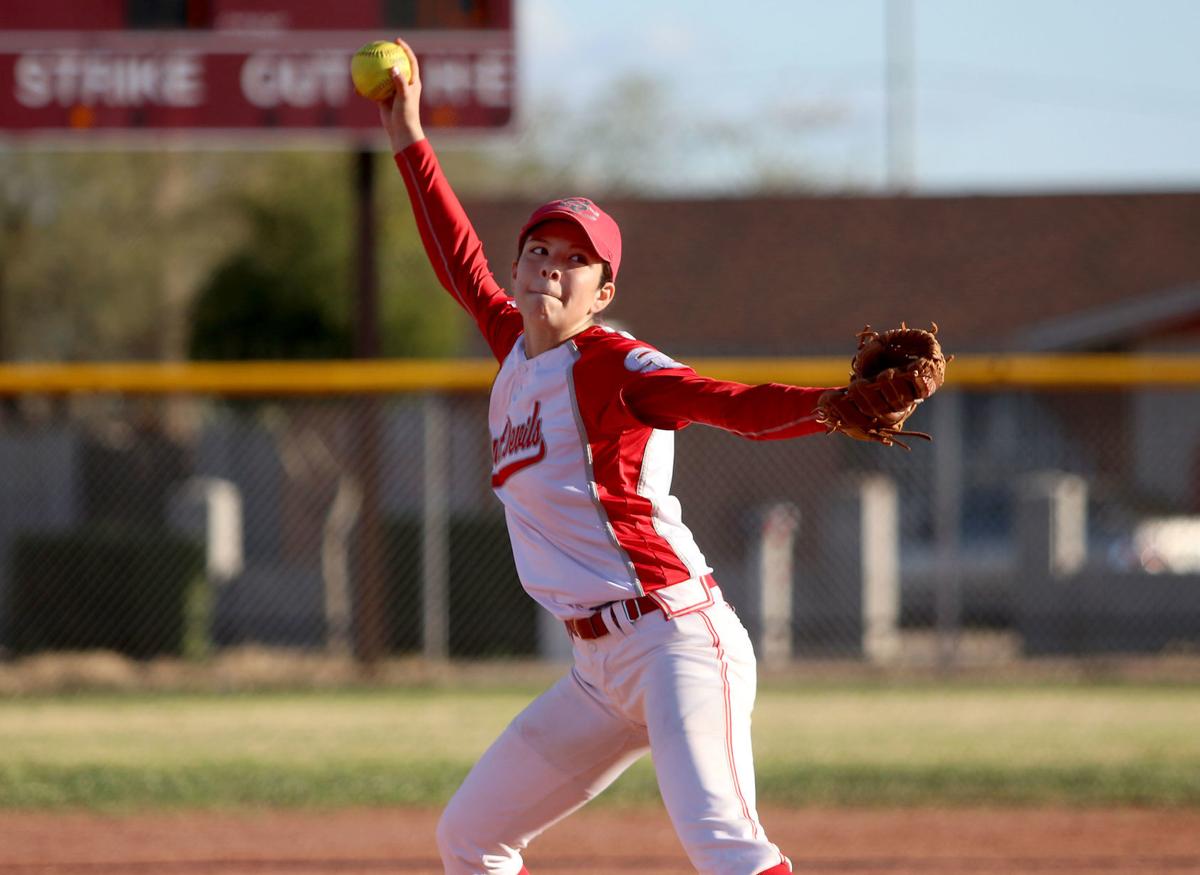 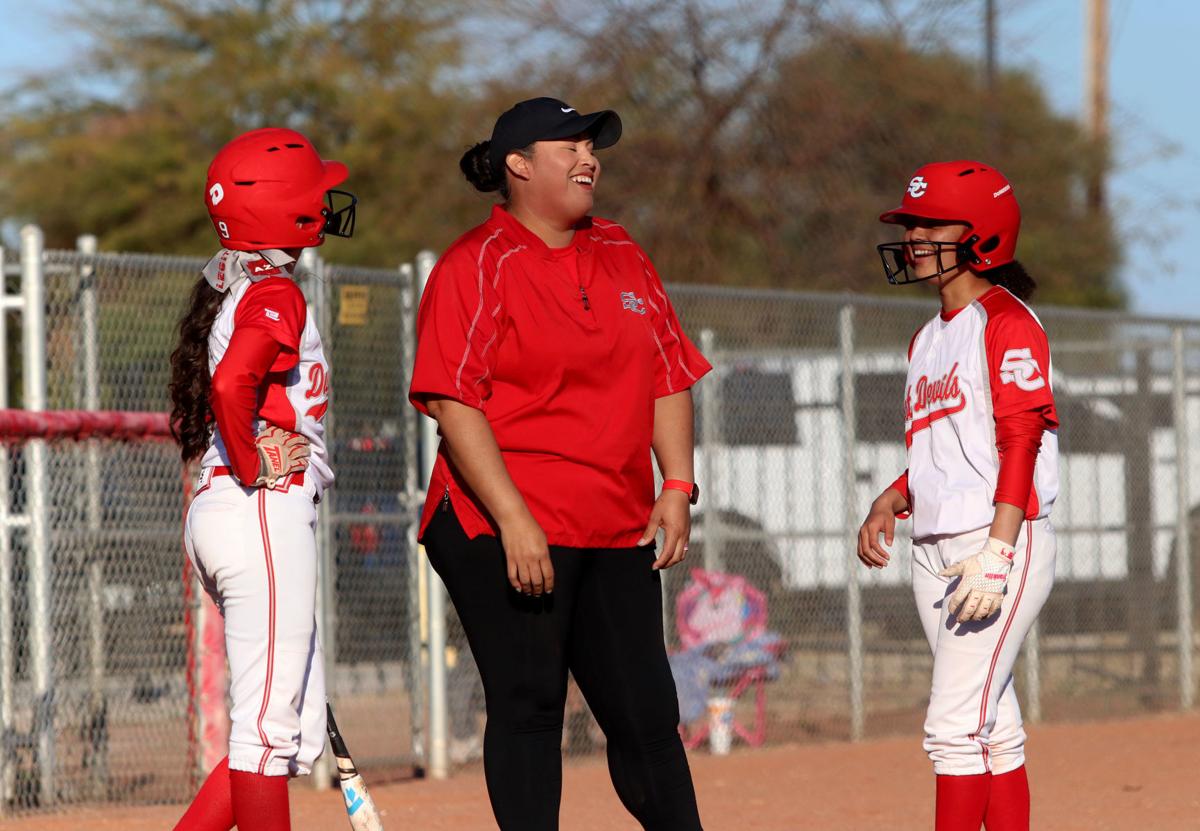 Santa Cruz Valley’s Rhaylyn Tarango throws to first base March 4 during a game against San Carlos in Eloy.

ELOY — Santa Cruz Valley managed to grab the second spot in the 2A Metro region last year, which led to a play-in round berth as the No. 24 seed.

Although the Dust Devils made a postseason appearance, it was a very uncharacteristic season for a program that had not had a losing record since 2013 when it went 9-19.

Santa Cruz graduated its three top hitters in Cat Neal, Deseray Macias and Kayla Robertson, with Neal and Robertson being key figures for the Dust Devils during their high school career.

Their leadership will be difficult to replace, especially with such a young team that features six freshmen this season, but Santa Cruz coach Andrea James is excited about her team’s potential.

“My freshman class, they’re a group that played club,” she said. “We haven’t had that since that last group that made a run at state, so the freshman class has been playing for a while, and they came right in.”

Miranda Tapia, Isabella Davis, Ylianna Velazco and Elyana Garza are the Dust Devils’ hottest hitters to start the 2020 season, carrying a batting average over .500, and they have combined for 20 of the team’s 32 hits.

“I would think that our strength is that they’re coming in with some experience,” James said. “A little more experience than we had last year, even though we had a couple seniors, we didn’t have much softball experience. [These girls] have the experience, they just have to jump up a level now because they’re playing older girls.”

Through three games, Santa Cruz has outscored opponents 35-8. In the circle, the two other freshmen are Destiny Cervantes and Rhaylyn Tarango, who have shared time for the Dust Devils, combining for 18 2/3 innings pitched and 32 strikeouts with a 0.38 ERA.

“Right now they’re splitting (time) equally,” James said. “Going forward, we’ll see. One has a little bit more speed, one hits location a little bit better. When we see some tougher teams, then one might emerge, but right now we’re seeing them as even.”

While there are three seniors on the roster, James is turning to two of her juniors in Clarissa Antone and Alina Ramirez to help lead the young group.

“They bring some experience, like telling them what to expect and trying to keep the freshmen up on that,” James said. “They’ve brought some leadership on that end, they’re starters and they’re taking over the outfield for the most part, building that part of it up because our infield is all freshmen.”

The Dust Devils finished with a 7-13 record last year. In Class 2A, the top two teams of each region are guaranteed a playoff spot. The goal for this year’s team is to win the 2A Metro and not end up in the play-in round.

“Like I say every year, we expect to make it to the playoffs,” James said. “I tell them that’s the expectation to get to the playoffs, and then how far we make it is off of how much work we put in. I expect us to at least make it a couple rounds into the playoffs. We’re not going to sneak in this year; I don’t feel like we’re going to be barely making it.”

James added the way the team’s schedule is structured has helped ease her young team into playing at the varsity level. But the real challenge will begin at the Grace Lee Haught Memorial Softball Invitational in Payson on March 12.

“We haven’t really seen any big competition so they’re slowly moving into it, but it’s an adjustment for them,” James said. “It’s a little bit faster, more situational stuff that they’re not used to. When we hit the Payson tournament, they’re going to see a lot more. We’ll see how they react because they’re going to see a lot more competition there with some of the older teams.”