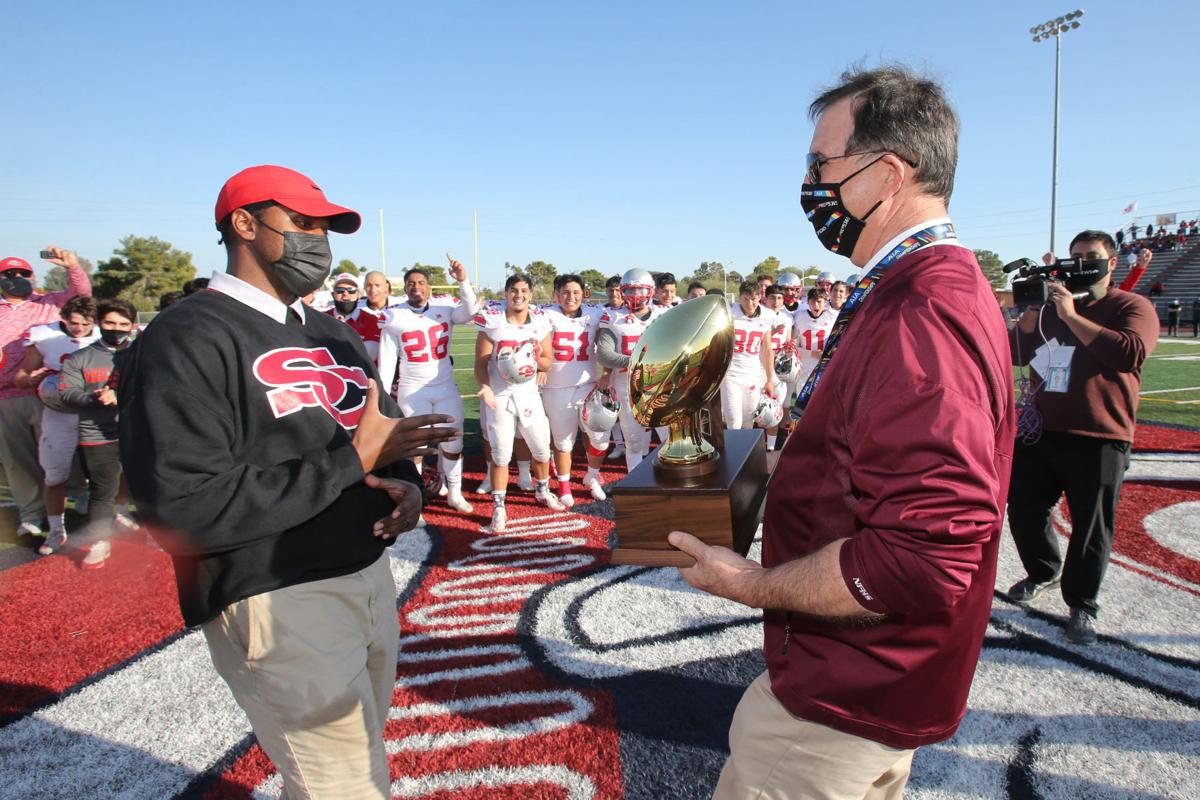 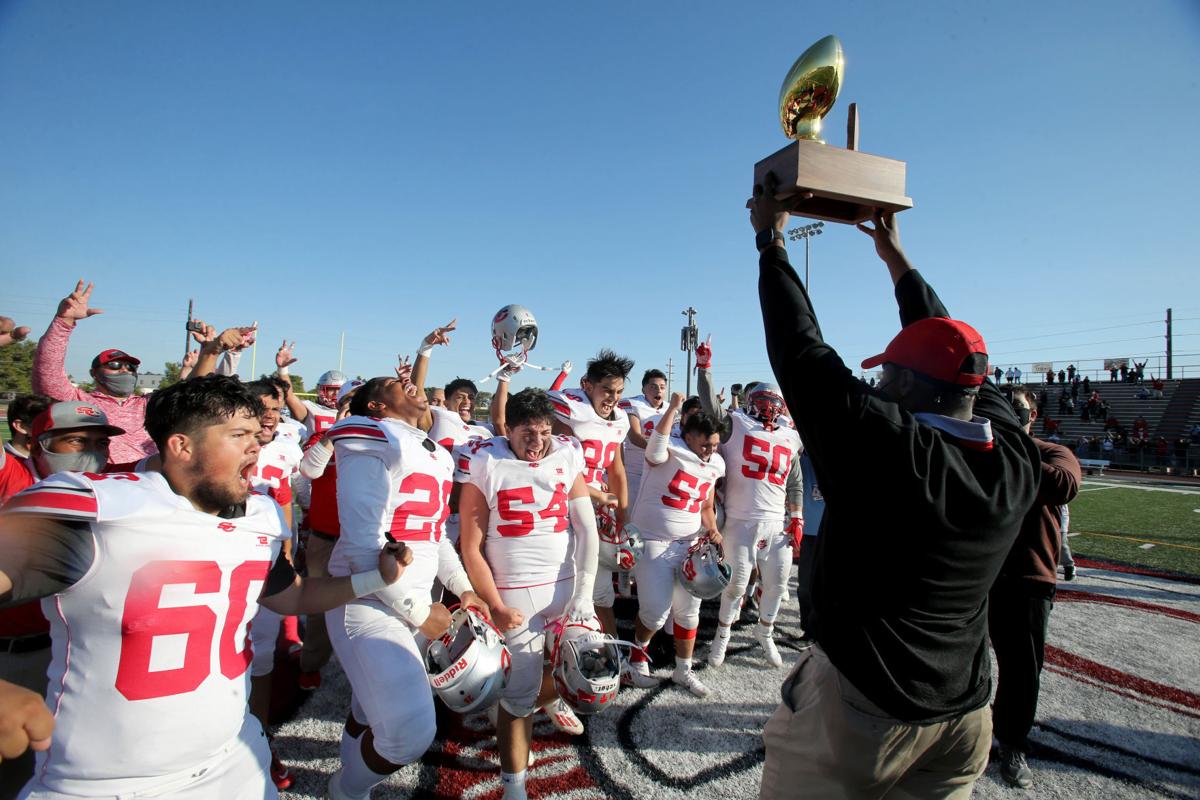 Santa Cruz Valley Dust Devils and coach Rishard Davis celebrate their victory in the Class 2A State Championship on Dec. 12 at Coronado High School in Scottsdale. 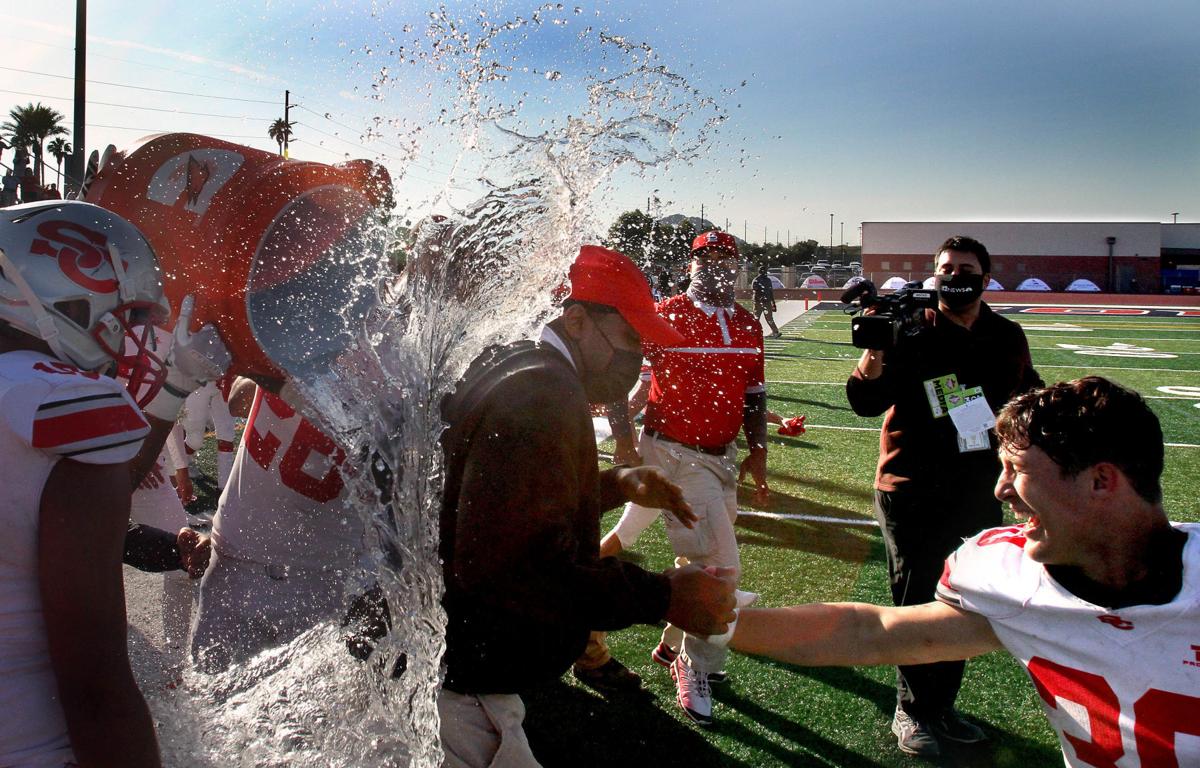 Santa Cruz Valley coach Rishard Davis receives a Gatorade jug water splash after a 42-7 win over Benson in the 2A state championship game Dec. 12 at Coronado High School in Scottsdale. 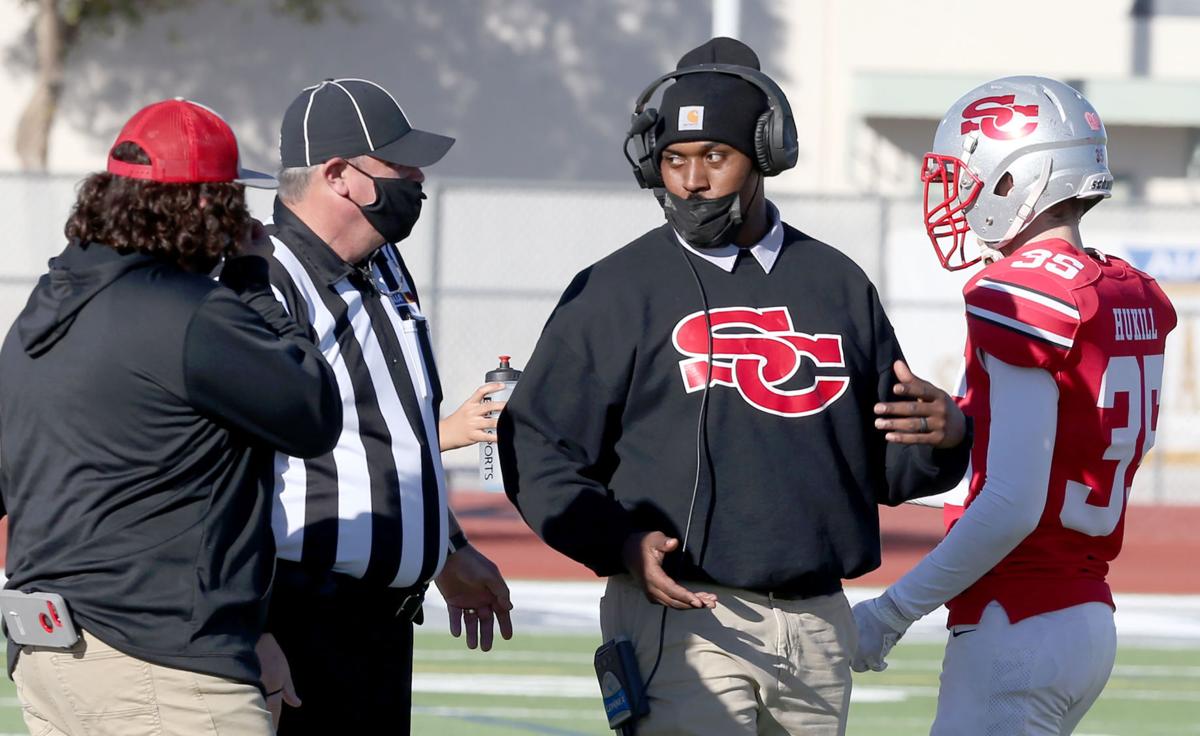 Santa Cruz Valley coach Rishard Davis speaks with an official during the 2A state semifinals against St. Johns on Dec. 5 at Higley High School in Gilbert.

Santa Cruz Valley Dust Devils and coach Rishard Davis celebrate their victory in the Class 2A State Championship on Dec. 12 at Coronado High School in Scottsdale.

Santa Cruz Valley coach Rishard Davis receives a Gatorade jug water splash after a 42-7 win over Benson in the 2A state championship game Dec. 12 at Coronado High School in Scottsdale.

Santa Cruz Valley coach Rishard Davis speaks with an official during the 2A state semifinals against St. Johns on Dec. 5 at Higley High School in Gilbert.

ELOY — Calling it one of the most difficult decisions of his life, Santa Cruz Valley football coach Rishard Davis is leaving the school to go back to his home state of Alabama.

Davis, who led the Dust Devils to the 2A state championship in December — their first football title since 1990 — made the announcement via Twitter on Saturday night.

“By no means have these last 7 years been easy, and it comes as no surprise that I’m struggling as I write this,” he wrote. “As hard as this decision has been I truly believe it is the right decision for my family and myself.”

In 2014, Davis was hired to be a math teacher at Santa Cruz. He had no intention of coaching until he was encouraged to apply for the football head coach position, which he eventually landed. He inherited a once-proud program that had gone 6-34 in the previous four seasons.

The Dust Devils went 58-21 (.734) in seven years with Davis leading the program, including four state semifinal appearances and the 2020 state championship.

After the 2020 season, some people in Arizona high school sports media and others in Pinal County started speculating about Davis taking a more prestigious coaching job.

Speaking to PinalCentral for a Retro Rewind podcast episode in January, Davis said he was happy at Santa Cruz and had no reason to leave.

Although he didn’t give details about where he was headed in his original Twitter message Saturday, Davis told PinalCentral in a direct message that he has been offered a job as an offensive coordinator for an Alabama high school. He would also be a math teacher at the school.

The hire is pending school board approval, and the item is on the board’s agenda for a meeting next month. Davis preferred not to mention the specific school since the hire is not yet official.

Some may wonder what changed now that Davis is leaving. Not everything is as it seems. Davis is going back to Alabama, but it’s not because he’s trying to climb the professional ladder.

“I know this may be surprising to some, but it’s something my family and I have discussed for the past three years,” he told PinalCentral. “My goal is to be closer to my parents. This is no way a career move. I just want to give my parents the opportunity to be around their grandchildren and not just see them once a year.”

Davis was initially worried how the news would be received because he considers himself a loyal person who people can count on when they need him the most. But he said the Eloy community has been understanding. It appears he’s received nothing but support and well wishes from the vast majority of people.

Santa Cruz senior running back Hunter Ogle, the PinalCentral Player of the Year the last two seasons, offered his gratitude toward Davis in a Twitter post.

“Coach, I just want to thank you,” Ogle wrote. “Thank you for making me a better person, a better football player, and most of all thank you for treating us like family it couldn’t have been a better 4 years.”

Other current players including Mauricio Lopez, Sias Lopez and Angel Roman, and former players such as Alec Wyble-Meza, chimed in to thank Davis in social media posts.

“You have been a huge role model and inspiration to our city, residents, students and athletes and you will be deeply missed,” Powell said in a tweet.

Davis leaves with a heavy heart. He also leaves with pride in his team’s accomplishments and will look back on his time in Eloy with fondness, saying it has been the best seven years of his life.

“The Eloy community and the Santa Cruz administration believed in me when it felt no one would give me a chance,” he wrote. “You made my dreams come true and all I have ever wanted to do in return is give 100% all the time ... You welcomed my family and I to a place we didn’t know existed, but now I can say I’m a Dust Devil for life!”