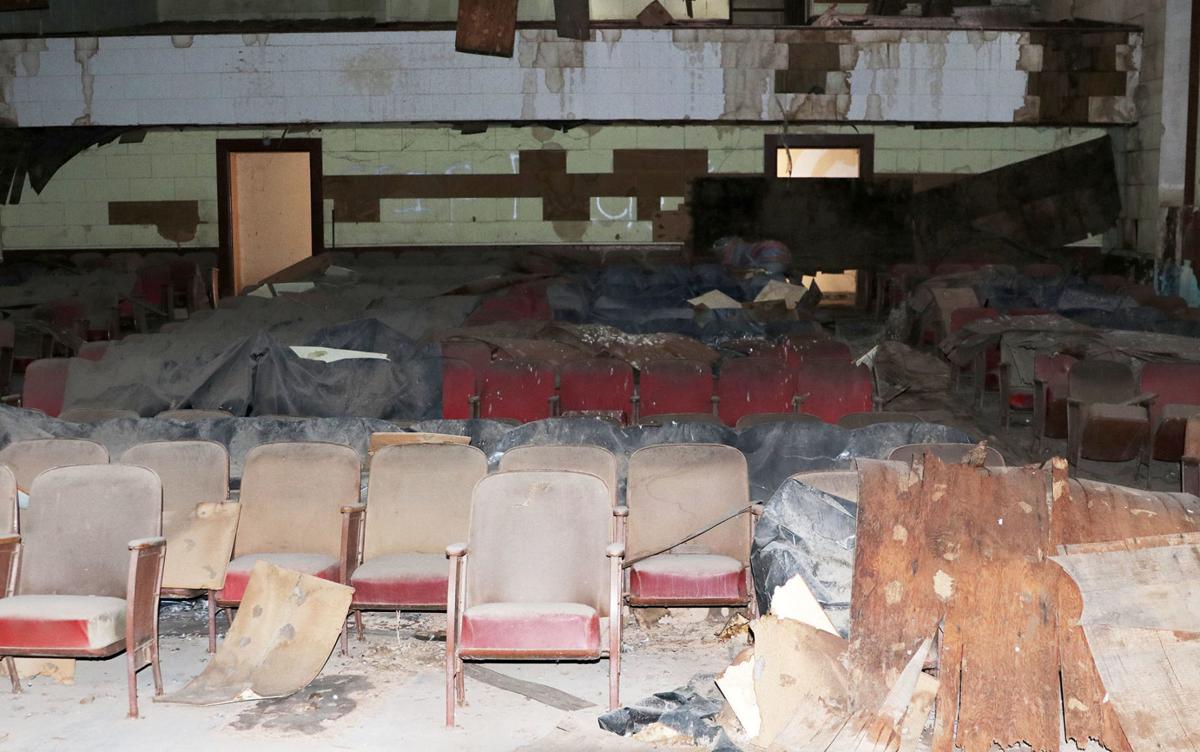 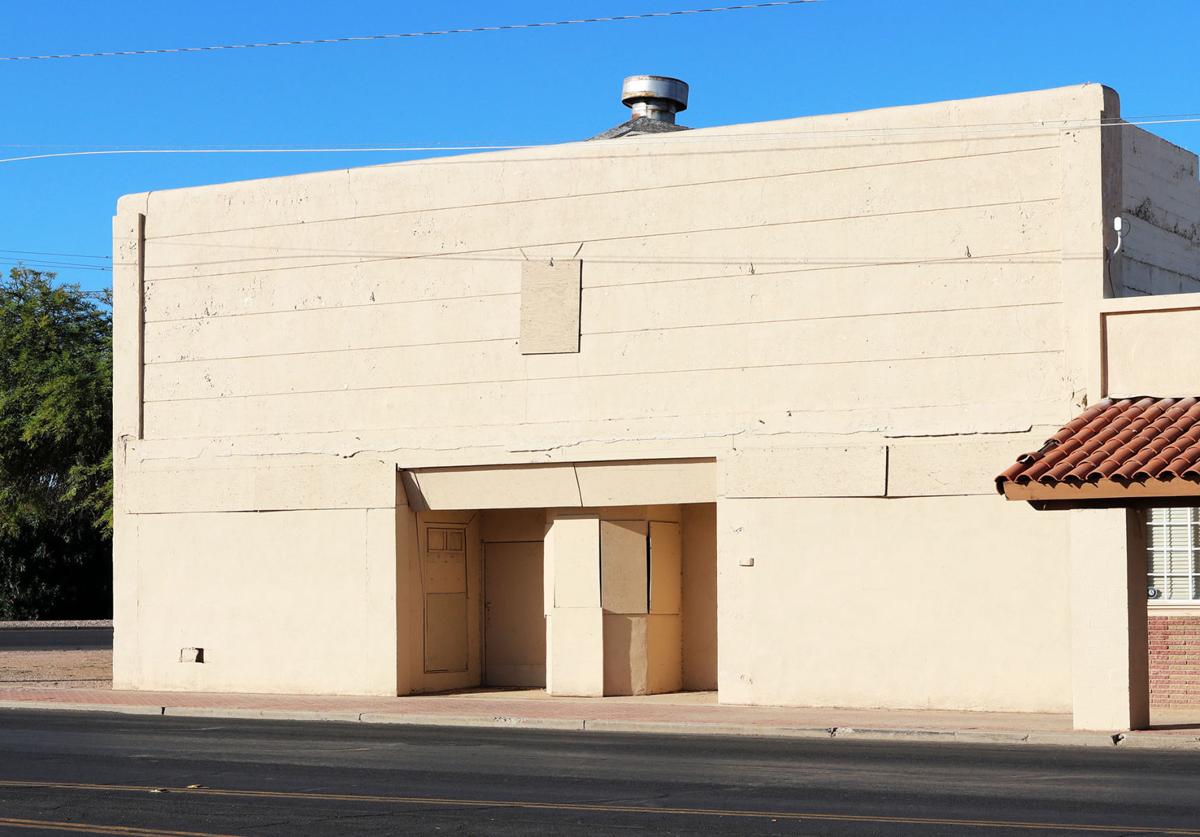 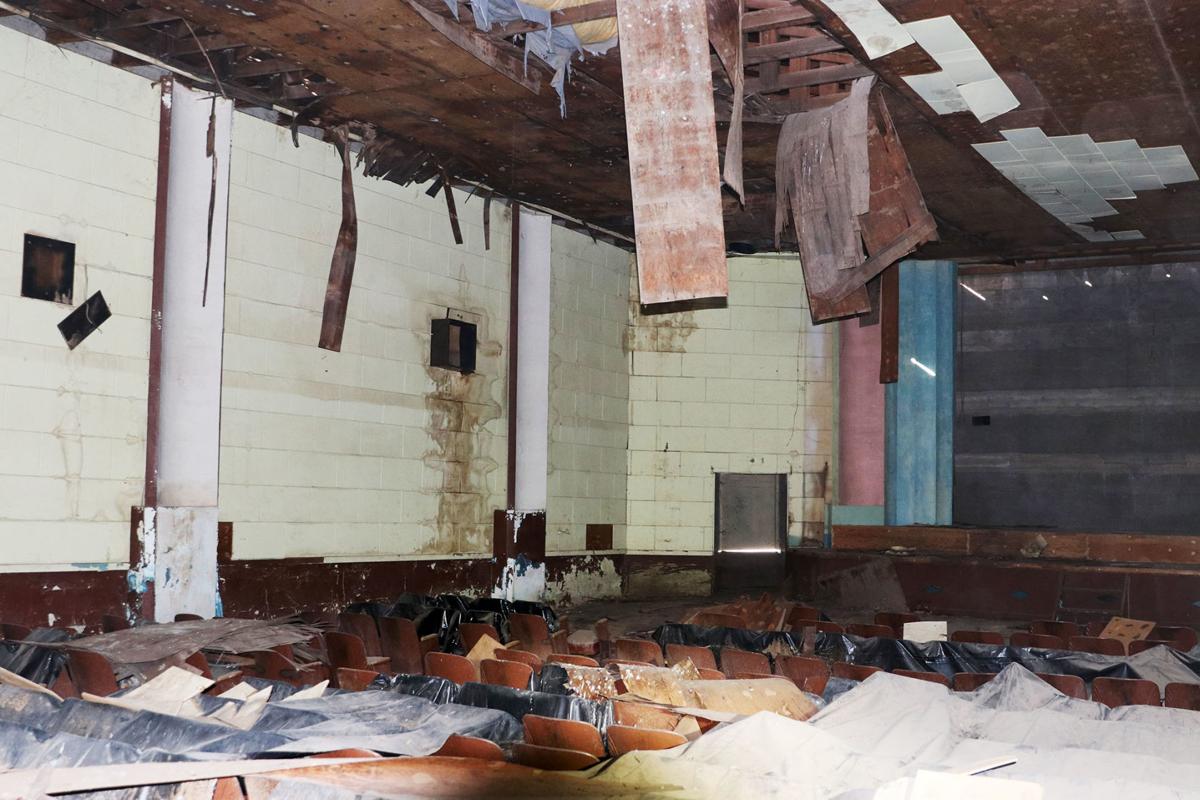 ELOY — It’s a rare occasion when the City Council agrees on something that pertains to the Dust Bowl Theatre.

Council members are usually on opposite ends of the table when it comes to deciding whether the building should be restored to some extent or demolished.

During Monday’s work session, the council reviewed a presentation from entrepreneurs Chad Dexter and Schwann Hanns about their idea to turn the building into the Dust Bowl Entertainment District.

The council also briefly heard about an alternative concept from city staff if the decision is to demolish the building and turn the space into a park.

Community Development Director Jon Vlaming told the council that a park would allow the city to later develop the site, if there ever is an interest, without leaving a vacant lot if the building were to be demolished.

The park would include a plaza on the corner of Main and Frontier streets and a gazebo town square.

Both projects would incorporate the Eloy Veterans Heritage Park and both plans take into consideration the Veterans Center, which will be moving to a new location.

Hanns told the council that by demolishing the building and turning it into a park, the city would lose money, and parks do not generate revenue.

He also added that Main Street Park is located a few blocks over.

Dexter and Hanns have already bought two parcels on Main Street and are working on bringing a spirits distillery and manufacturer of health supply products as well as selling Native American jewelry and art crafts.

They hope to have the first phase completed later this year, following delays due to paperwork issues. Additionally, Hanns and Dexter were in a rush to produce health supplies and started operating out of Tempe with a project that has garnered most of their attention.

“Our expectation of how the process goes was a little different than how it happened,” Hanns said. “It’s not anybody’s fault, it’s just we were not familiar with the city and how it works and no one was familiar with us.”

The duo hopes to accomplish two other phases in their efforts to help draw more people to the area. The second phase includes the Dust Bowl and turning it into an event venue as a welcome hub to the city and the third phase is to expand the manufacturing of alcohol to a full-scale ethanol fuel plant.

Dexter told the council that they are not asking for any type of funding for the Dust Bowl project and they do not expect city staff to help manage the venue once it is complete.

Additionally, the building would include an arcade, a museum and gift shop as well as a small shop for clothing and accessories.

There would also be 18 booths available for food vendors to set up with windows that will allow people to stop by on the outside to get food.

One of the council’s concerns was what happens if this project doesn’t come to fruition and the building remains vacant.

“I don’t think anyone is doubting that this is a cool idea but is it real?” Councilwoman Sara Curtis said. “Can it actually happen?”

The council was also a bit apprehensive and cautious as they found the project to be a lofty goal.

“This building has been like this for a long time, for 20-something years as I understand,” Hanns said. “You guys have nothing to lose. We either do it or we don’t do it, I mean there’s nothing to lose for the residents or the City Council. At least you are giving the opportunity to somebody who is willing to do it with their own money, without you spending a dime. If we can’t fulfill our promise then just take it back, we’re willing to sign a contract. … I don’t understand where that stress is coming from.”

Mayor Micah Powell stated that the city has been taken advantage of in the past and the current council doesn’t want to make mistakes.

“If we give you the green light and you guys start, then it fails, the mud is on our face,” Powell said. “We could have made other efforts somewhere else, that could have been done then and there. One thing I don’t want to do is paint a picture of everything, making it look nice and then egg falling on our face. I think we’re protecting ourselves from ghosts of the past. If it can be done, that’s great. I’ve told you that, but I’ve also told that it’s going to be a money pit. … I don’t want this to be a double-edged sword of negativity.”

Economic Development Specialist Jeff Fairman mentioned that he is fascinated by Dexter and Hanns’ proposal because it’s not something that staff would try to go out and bring to the city. But along with his fascination, he also understood the council’s concerns.

“The worst thing that can happen is that a year from now we get the building back and we have another PhoenixMart on our hands or another Dreamport Village,” Fairman said. “I don’t want to create expectations that we’re not able to carry through simply because that has been a black eye on a lot of the communities around here.”

Fairman believes that more research needs to be done and Powell added that lodging would be an issue as Dexter and Hanns plan to bring in clients from different states and from other parts of Arizona for the corporate events.

“This is going to be a cart before the horse,” Fairman said. “I don’t think that’s going to happen until there’s a better market for a hotel.”

Council members Dan Snyder, Georges Reuter and Curtis all questioned if Dexter and Hanns have previous experience with this type of project.

“We haven’t done any project like this,” Hanns said. “We’re not presenting it as a construction company, we are presenting it as business owners on Main Street. The reason we picked this idea is because we talked to a lot of people in the city of Eloy and outside the city of Eloy, in California and Arizona. As far as the optimum option, this was what everybody agrees on.”

Hanns mentioned that he has experience working in commercial real estate and has worked with businesses in Old Town Scottsdale. He also owns a business of Native American jewelry and expressed that the main purpose of this project is to bring people and businesses to the area.

“I agree that downtown Eloy has one thing and that’s Main Street, that has potential,” Reuter said. “The rest has no potential as it is now. If we don’t get Main Street running, the rest of downtown will not prosper to where we want it. … We’ve put a lot of money in the facades, we’ve put a lot of money in the water tower and if we don’t put the effort in Main Street as a place for people to come to eat, to drink, to have fun, downtown Eloy will never live up again.”

Eloy to get 4 estimates on Dust Bowl Theatre rehab, destruction

Dust Bowl Theatre: To save or not to save, Eloy officials must decide