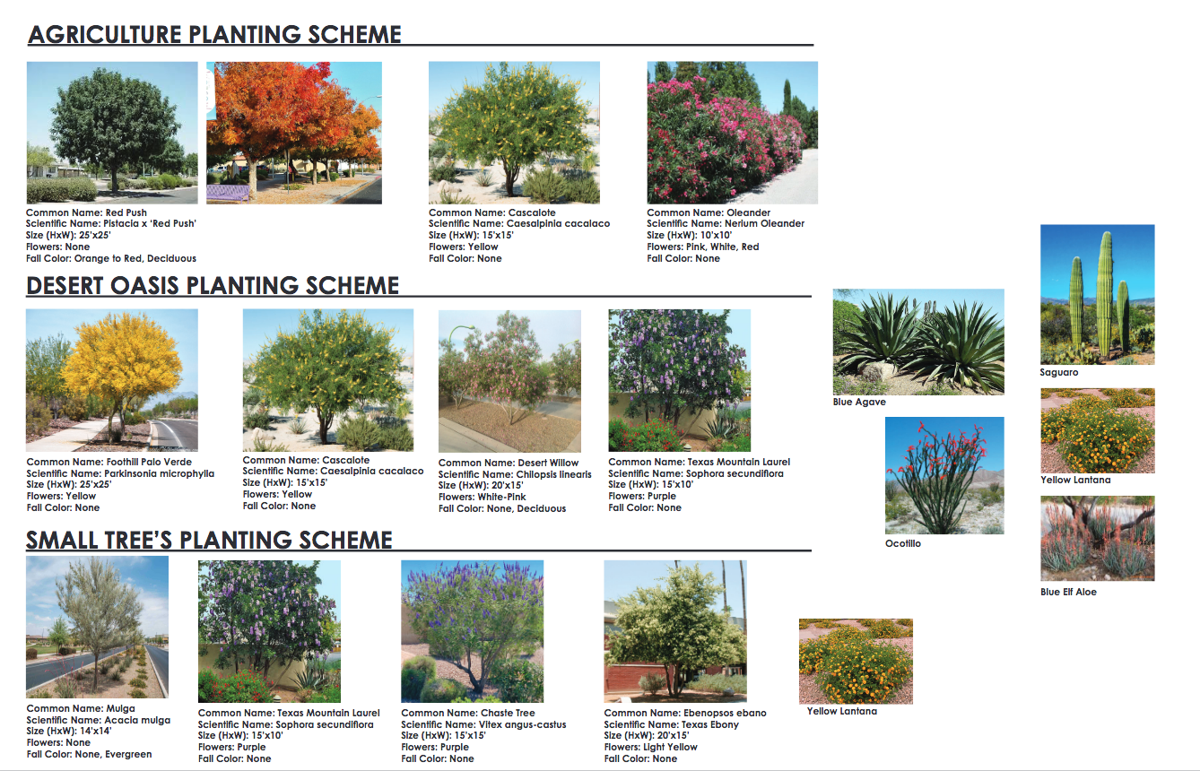 ELOY — It began with an Eloy resident trying to find a way to bring more trees to the city.

Now it has grown into a full-blown landscape project for the section of Frontier Street between Myers Boulevard and Stuart Boulevard.

“When a resident comes to the council and has an idea to help improve our city, I think that’s amazing,” Mayor Micah Powell said. “And when we act on it, that’s even better. It shows that people care out there, and it’s not just us on the dais.”

The project is part of the city’s Capital Improvement Program and is intended to improve air quality through carbon capture, reducing stormwater runoff through increased infiltration and reducing the urban heat island effect, all while enhancing the aesthetic natural environment and providing a welcoming gateway to assist with the city’s economic development efforts.

The three proposed landscape designs are:

In an online survey, the city received 109 submissions from the community and the desert oasis had the most support of the three options.

“I like the agriculture one because it’s more color,” Vice Mayor Andrew Rodriguez said. “The trees put out more color. I know the desert oasis is what everybody voted for, but I personally think the agricultural one has more color and would shine better on the whole area.”

All of the plants featured in the designs are drought-tolerant in an effort to keep water costs down.

“These will be designed and implemented with an irrigation system,” Vlaming said. “It’s going to be low as it can possibly be. We’re utilizing species that are of low water use. Ultimately it depends on the spacing of the trees that we utilize.”

A big concern for many of the council members are the oleanders. Although the plants do reduce noise from passing trains, there is the maintenance issue for trimming the shrubs and Councilwoman Sylvia Guanajuato Rodriguez mentioned the plants can provide a hideout for illegal activity.

Councilwoman Sara Curtis suggested a combination of the desert oasis design and the agricultural design so that there could be some color while also incorporating desert plants.

Vlaming told the council that this project could be the beginning of planting more trees throughout the city but that it would be a good idea to establish a theme.

“This is very much an initial demonstration project on a bigger project that could really create a very aesthetic final product,” Vlaming said. “There could very much be more to come.”

Powell brought up the idea of having community members adopt or sponsor a tree, which could alleviate some of the work when it came to trimming the trees and keeping the area clean.

The council decided to go with the agricultural design and requested to have the oleanders replaced with the Texas mountain laurel.

“I hope it doesn’t give a bad taste to the people who put their time and effort into it,” Powell said.

How close should a marijuana dispensary be to a bar? Eloy council discusses

ELOY — Much work has been done in the downtown area, starting on Main Street with the facade…

Toltec Road to get new surface in Eloy

ELOY — CORE Construction and Architekton may have to set up a permanent office in Eloy.