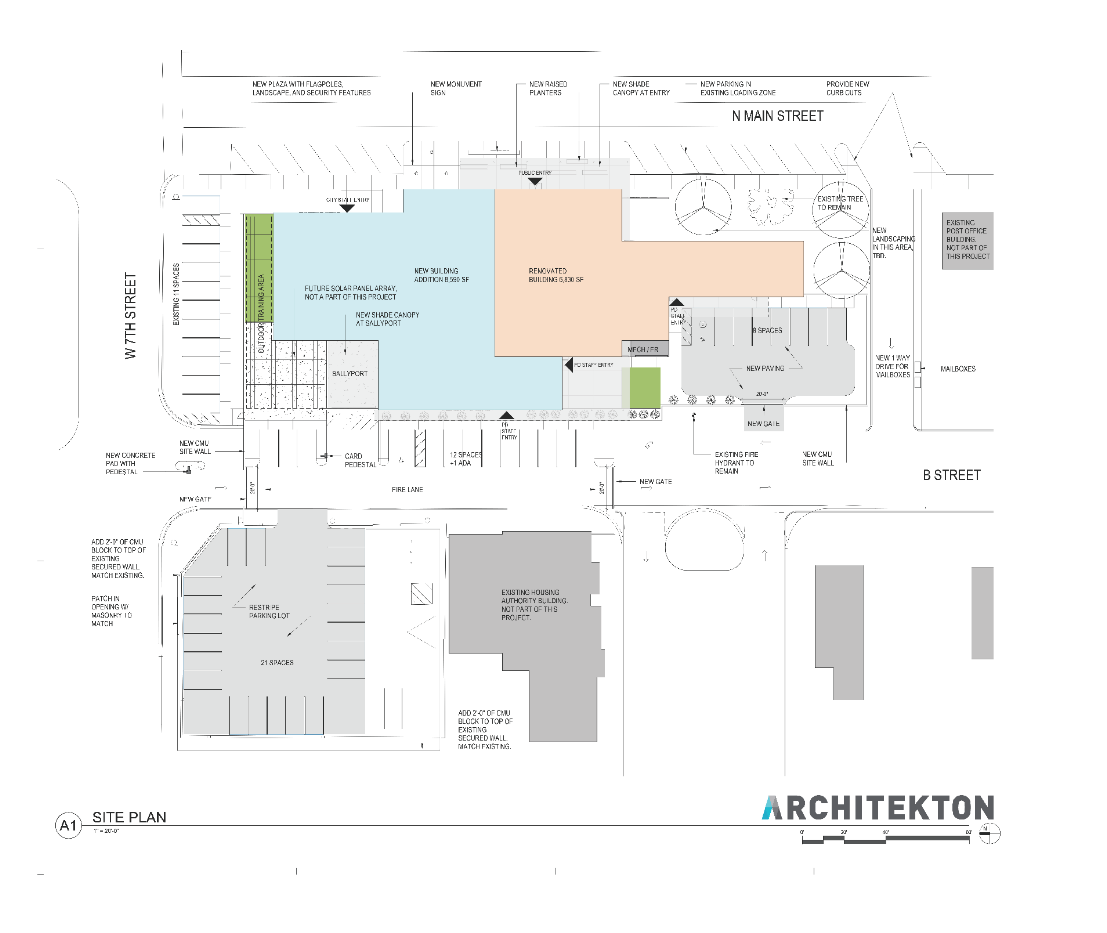 ELOY — The City Council reviewed the schematic design for the new Eloy Police Department renovations this week during a study session.

“We’ve found a lot of things,” Mike Rosso from Architekton told the council Monday about the old City Hall. “Some things not so good, some things really great and so the plan was modified to showcase those really great things that we have found in the building.”

According to Rosso, the renovations will be completed in two phases, starting with the portion of the building that used to be the courtroom and the finance department.

Since city staff moved across the park to the newly constructed City Hall, the former building’s interior has undergone demolition and will be part of the first phase before the former city administration offices and the current police station are torn down.

The new portion of the building will include more holding cells, but Police Chief Chris Vasquez told the council that detainees will only be there for a few hours before being transported to Florence.

“Having managed a jail, I managed one for four years at the Sheriff’s Office, and let me tell you, you do not want to get into that business,” Vasquez said. “The liability alone will kill you. Getting into the jail business is something we do not want to do. Even holding them for 24 hours, you are now opening up the door for a liability, so it’s advantageous to get them in, get them processed and get them over to county.”

Rosso also told the council that once the project is complete, part of B Street will be closed off to allow safe parking for the officers and the rest of the staff.

He also pointed out that a key aspect to the building will be the facade that the public can easily see, and also the view from the back of the building for the staff.

Up front, some of the parking spots will be removed to create a plaza space.

“It’s going to be a point of pride. It’s going to help them (Police Department) with retaining officers as well as recruiting them,” Rosso said. “The building is one thing, but really the space outside of the building is really intriguing as well.”

“Obviously, that wasn’t our intent when we started and I know that’s not your budget number,” B.J. Pennington from CORE Construction said. “We take a look at our method of approach and all of our assumptions, we’ve worked with Regis (Reed) and Rosso’s team to make sure that those assumptions are in line with the overall envision of the city of Eloy.”

The design development is scheduled to be complete by November with the guaranteed maximum price set in January. Construction is set to begin in mid-February.

“We are anticipating this to be the maximum amount, this is just construction,” City Manager Harvey Krauss said. “Once we get into design development, there may be increases in cost of materials, labor, we change some things when getting more into the details, there might be some pluses and some minuses but we hope that they’ll even out. This is just construction costs, so the total project cost will exceed this, so don’t be surprised.”

Krauss also told the council cities do not go around building new government buildings like a city hall or a police station every other year.

“The last time we built a new building was this building (City Hall) and the last City Hall building lasted 60 to 70 years,” Krauss said. “So assuming that there’s not a lot of growth, this police station is going to last many, many years. I feel that if we’re going to do it, we need to do it right and one that will last for many years and we can all be proud of and the community will be proud of.”

Krauss added that the project costs will be handled through cash reserves and that there are no bonds or additional taxes being paid.

“That’s something that we need to educate the citizens on why we’re doing this,” Powell said. “We can have them do all the tours in the world, but it just comes down to dollars and cents to them. It’s not very often that we have a City Hall and a Police Department built on our term.”

ELOY — The Eloy Police Department has struggled with its communication coverage since the city lost the use of a Toltec tower in 2018, and off…