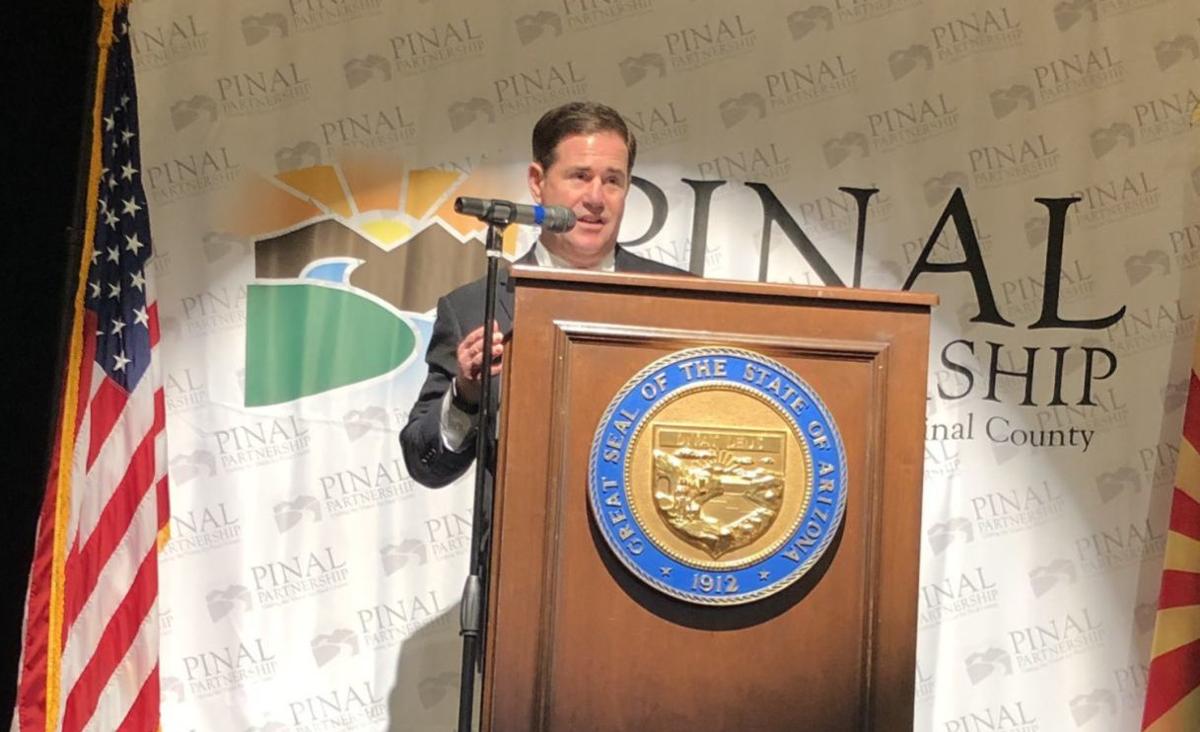 Gov. Doug Ducey speaks to Pinal Partnership about his latest budget during a Feb. 25 meeting in Eloy. 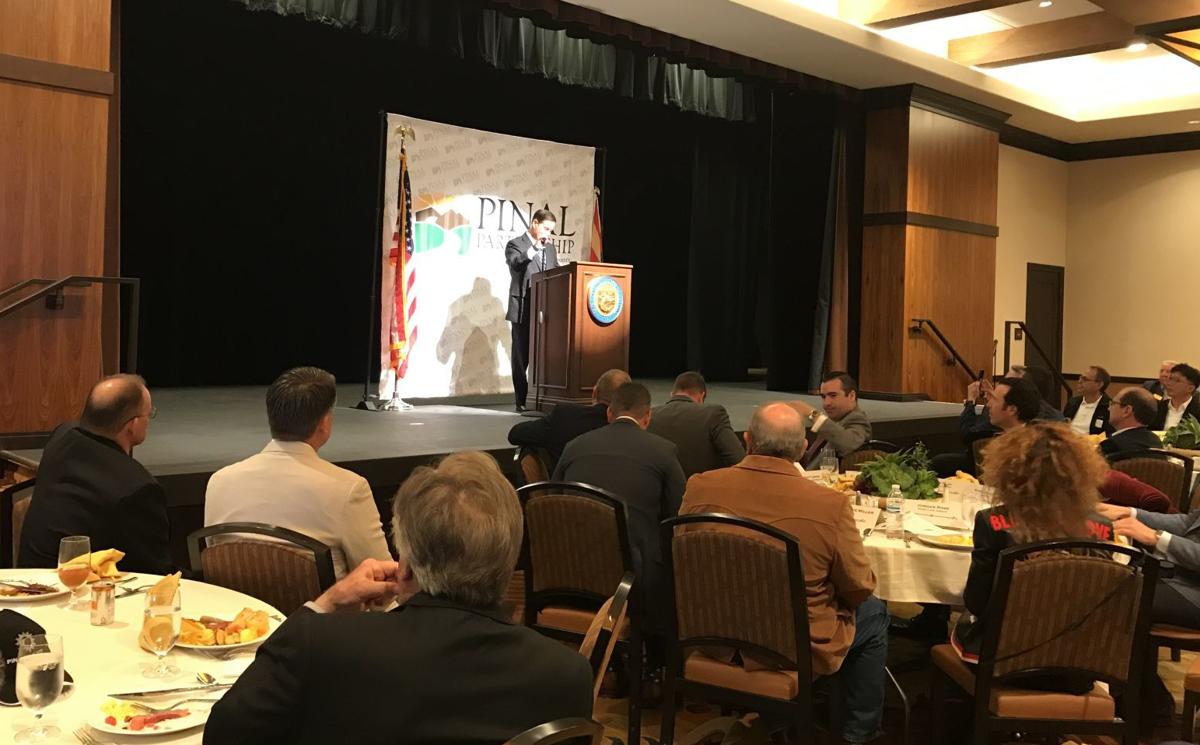 Gov. Doug Ducey speaks to Pinal Partnership about his latest budget during a Feb. 25 meeting in Eloy.

“Our budget puts the pedal to the metal on one of the most important highway projects in the state — widening I-10,” Ducey said.

The governor spoke at the development-government organization's monthly meeting at Robson Ranch in Eloy. He highlighted several initiatives from his 2021 budget including funding to widen I-10, the closure of Arizona State Prison Complex-Florence, Pinal County and the state’s economic growth, concerns over the water supply in Pinal County and the spread of the coronavirus.

After the meeting, Ducey stopped by Skydive Arizona in Eloy to tour the facility and check out its indoor wind tunnel.

The governor repeated his budget pledge of $28 million to accelerate the project to widen the 56-year-old bridge over the Gila River to three lanes in either direction and said he’s working with federal transportation officials to round up the remaining funds to finish widening the roadway between Casa Grande and Chandler.

The federal government and governors in all 50 states are unanimous in the need for money for major infrastructure projects across the U.S., but especially in the West, Ducey told Casa Grande Mayor Craig McFarland, who asked about the project.

Ducey also said his office plans to invest more than $4.6 billion over the next five years in transportation infrastructure, especially in rural counties. That infrastructure includes running broadband internet fiber along major highways, such as Interstate 40.

“There is always going to be more that needs to be done,” he said.

Ducey also addressed the proposed closure of the Florence prison.

“We’ve also got something in the works that represents a big step forward for public safety. We are going to be able to shut down a state prison in Arizona,” he said. “The move will enhance safety in our remaining facilities for inmates and staff and it will save taxpayers in Arizona $274 million over the next three years and ultimately we believe it will be good for Florence.”

The state plans to start moving inmates and staff to the Arizona Department of Corrections' Eyman Complex in 2021, Ducey said. This should avoid any problems with the population count for Florence in the 2020 U.S. Census.

The governor’s office has previously acknowledged that not all of the inmates currently housed in the Florence prison will fit in Eyman Complex. Some low-level offenders may be housed in county jails that are willing and have the room to accept them, others may be housed in private prisons in the state or in out-of-state prisons.

“This community has played a pivotal role in Arizona’s rise as a manufacturing powerhouse,” he said. “There are more manufacturing jobs than construction jobs. The world has come to take notice as Pinal County has become home to not one but two major auto manufacturers.”

The governor was also asked about the state’s efforts to find a solution to Pinal County’s water needs. A recent study from the Arizona Department of Water Resources shows that the Pinal Active Management Area, which governs the use of most of the groundwater in the county, may not have enough water in its aquifers to support future growth.

“This is a problem of growth and prosperity,” Ducey said. “We want a tailored plan for Pinal County. That’s a priority.”

Ducey also addressed concerns about the spread of the coronavirus from China. The state has had one reported case of the disease, and that person has now tested negative for the virus, Ducey said. He gets a daily briefing on the situation surrounding the virus and there is no current cause for alarm. The public will be notified immediately if a situation arises, he said.

Ducey calls for I-10 expansion north of CG

PHOENIX — Gov. Doug Ducey announced Monday a $28 million investment that will accelerate the…

PHOENIX — Gov. Doug Ducey is proposing to close one of the state prisons at Florence and mov…