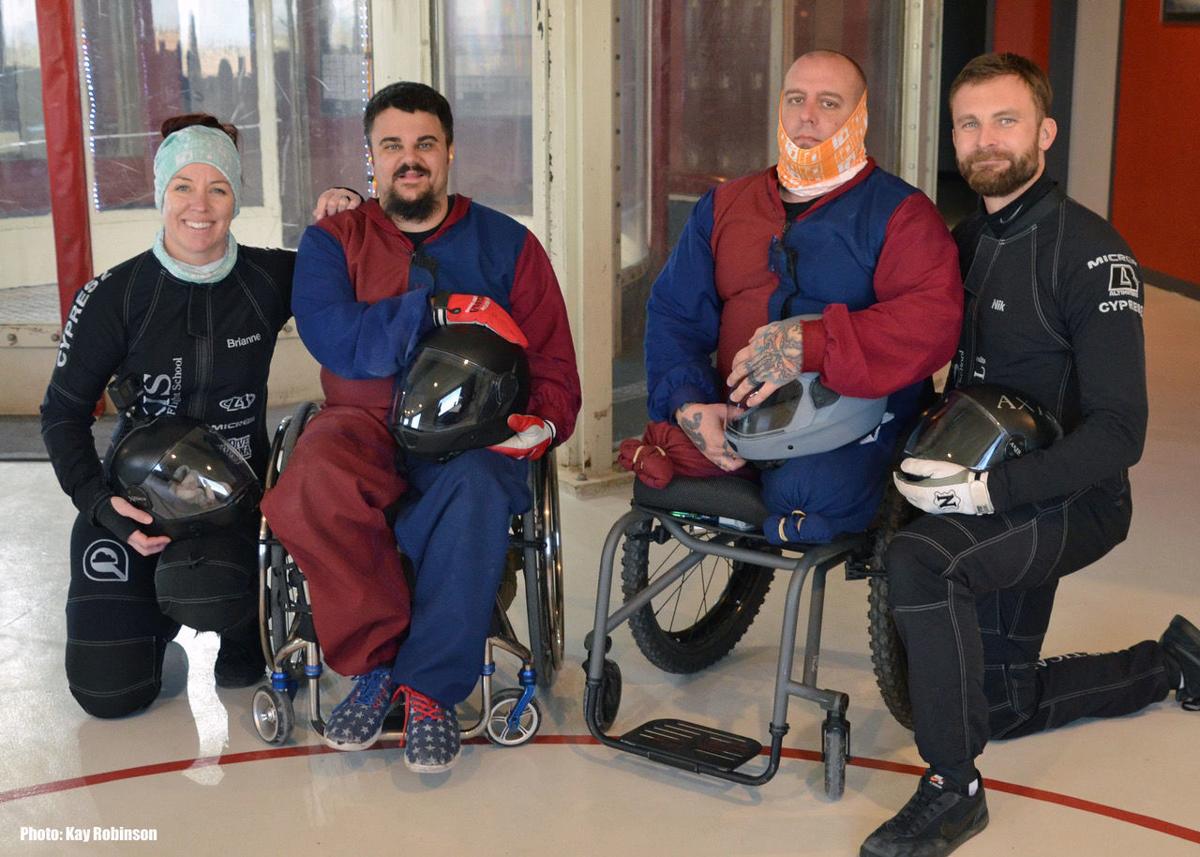 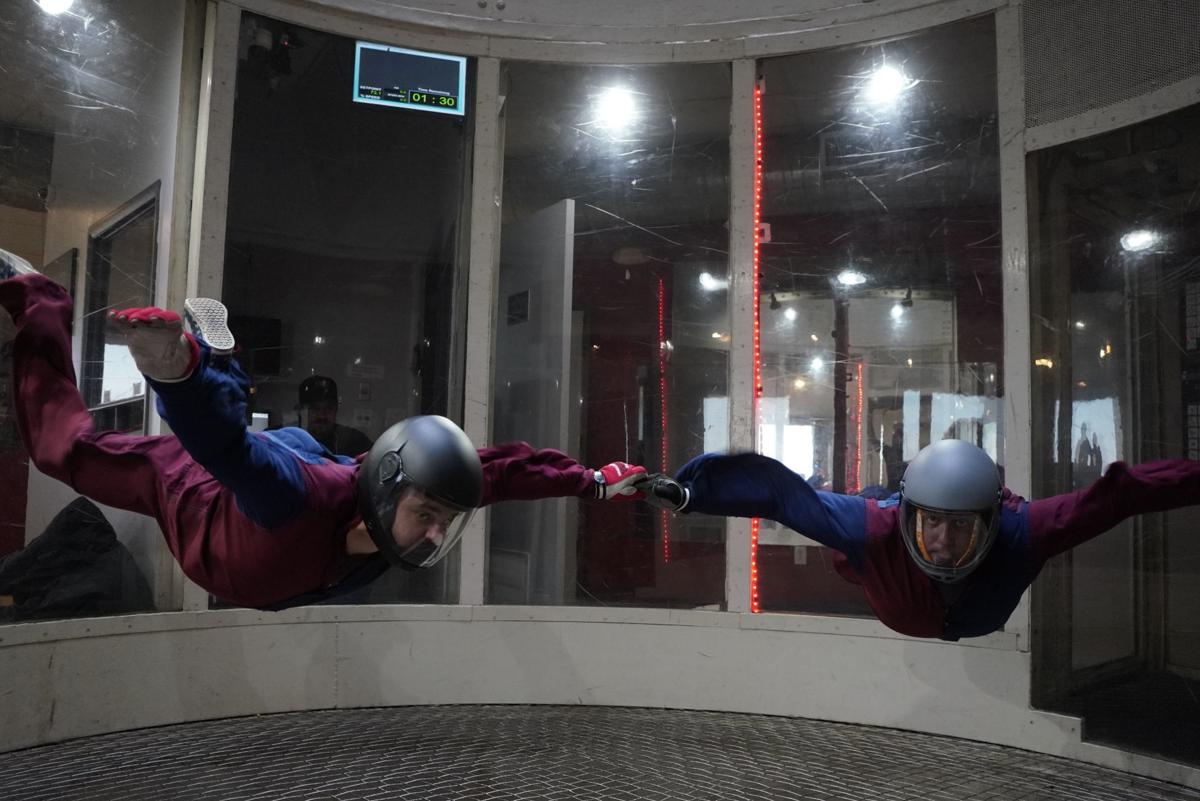 Chris Wolff, left, and Ryan Newell fly around together inside the SkyVenture Arizona wind tunnel in Eloy. 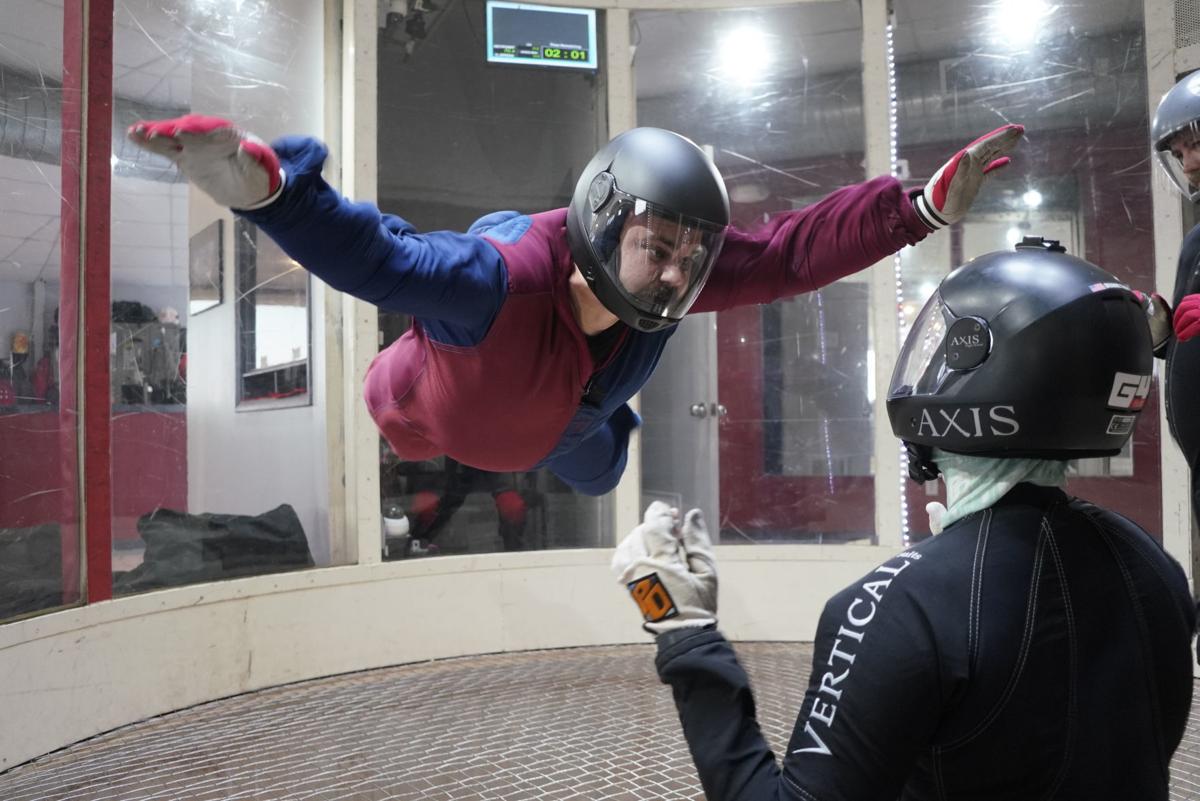 Chris Wolff is trained by his AXIS Flight School instructor Brianne Thompson inside the wind tunnel at SkyVenture Arizona in Eloy. 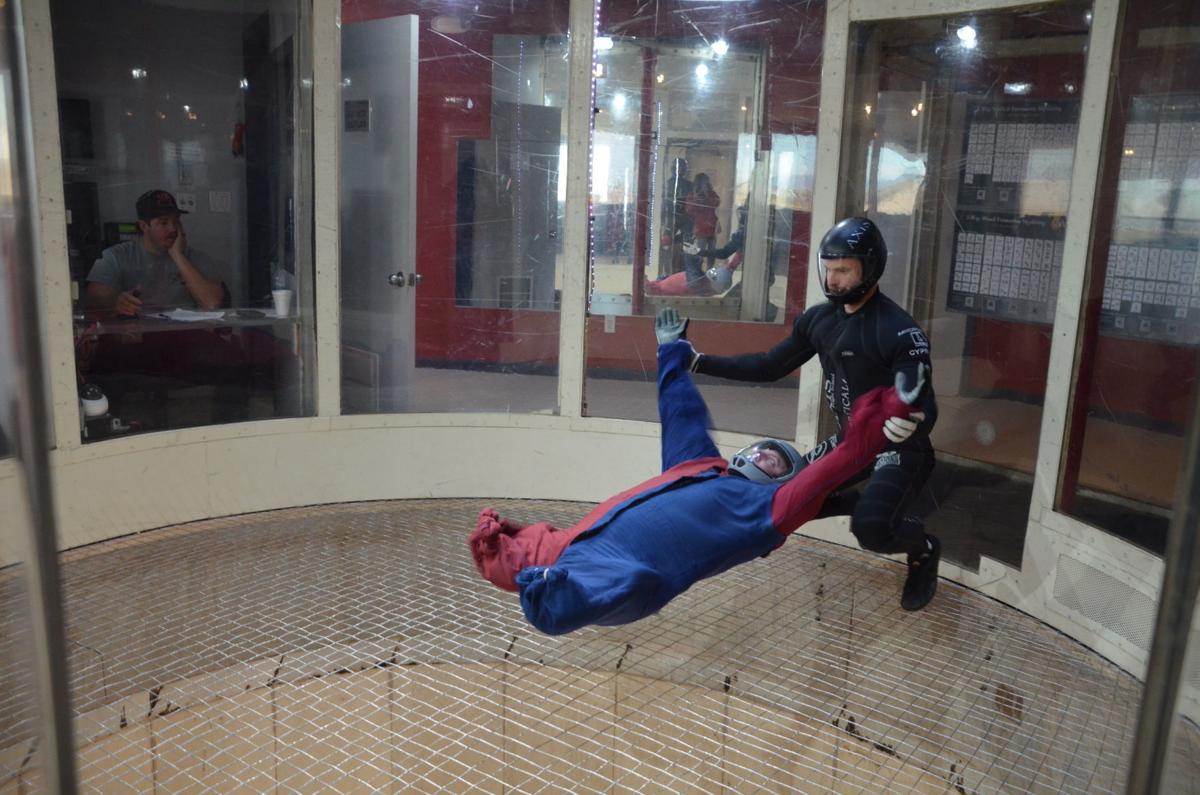 Ryan Newell is trained by his AXIS Flight School instructor Niklas Daniel inside the wind tunnel at SkyVenture Arizona in Eloy.

Chris Wolff, left, and Ryan Newell fly around together inside the SkyVenture Arizona wind tunnel in Eloy.

Chris Wolff is trained by his AXIS Flight School instructor Brianne Thompson inside the wind tunnel at SkyVenture Arizona in Eloy.

Ryan Newell is trained by his AXIS Flight School instructor Niklas Daniel inside the wind tunnel at SkyVenture Arizona in Eloy.

ELOY — Two paraplegic military veterans have taken up a new hobby and recently began their journey of obtaining their skydiving license.

Newell and Wolff are part of Operation Enduring Warrior, which is a veteran-founded nonprofit organization that offers various programs including skydiving.

The skydiving program offers an unparalleled sense of freedom of flight and endless mental, physical and emotional rehabilitative solutions in what can feel like a completely new dimension in their lives, often becoming a lifelong hobby, advocates say.

"The concept I tell my children all the time is society says I can't do this. I can tell them to sit back and watch what's about to happen," Wolff said. "It lets them know and understand that the only person that's going to change you is you, and the only person to hold you back is you. There's going to be a time when you find a wall that stops you, but what is it? Is it an equipment issue, is it a strength issue? There's something that goes on that you can break through, but it's not going to be maybe the way society thinks it's suppose to be done and that's the biggest thing we have to look at."

Wolff had some previous skydiving experience with four tandem jumps, but Newell had no freefall experience.

At SkyVenture Arizona, the two veterans spent many hours in the wind tunnel learning the basics of how to control their body during freefall.

"It's amazing," Newell said. "You're free. It's like nothing else in that moment matters, it's just you and the wind. It's the most incredible feeling to be in there and be free."

Wolff pointed out that in the wind tunnel there was a different sense of freedom compared to when he did the tandem jumps.

"You're defying gravity when you're in the wind tunnel floating above it, but you're by yourself; you're not attached to anybody," Wolff said. "You're in control of your turns, your rotations, everything that you're doing you're not relying on somebody else. It's kind of like having training wheels and you kick the training wheels off and you don't have them anymore."

Wolff spent 10 years in the Air Force and went to Afghanistan as an aerospace maintenance craftsman to disarm weapons. Everything went smoothly and he returned home, he went through the redeployment line and during the medical portion of the process where he got his vaccines and updates, he got a flu shot.

"Nineteen days later I woke up paralyzed from the neck down from a flu vaccine," Wolff said. "I laid in a hospital bed for 2½ years as a C5 quadriplegic. All I could do was move my neck side to side, I couldn't talk, couldn't function anything on my own."

Then one day Wolff slightly lifted his arm off the bed and 11 years later he's able to stand up and walk with forearm crutches.

Newell spent eight years in the Army and was in Afghanistan riding in a Humvee when his accident happened.

"I ended up rolling over 100 pounds of homemade explosives that detonated right underneath the truck and it took my right leg instantly," Newell said. "It broke my left leg femur in half ... I don't remember anything from that portion of it — just what everybody had told me. I was the only survivor out of the Humvee and that's actually what drives me to all the stuff that I do, it's because I live for my teammates."

Newell and Wolff spent five days in Eloy during the first session of their training before traveling back home. They both enjoyed learning from Thompson and Daniel and pointed out that they enjoyed the experience with their instructors as well as the whole skydiving community in Eloy.

"They take the time and they focus on each individual need and they'll tell you if you're doing it wrong," Newell said. "They had me flying on my own during the first session of being in the tunnel. I've talked to three other drop zones and even though they have instructors there, they didn't want to take the risk of training an amputee and these guys didn't hesitate one bit. These two just flat out go, it doesn't matter what the injury is, if it's amputation or paralysis, they will find ways to make us fly and there's other drop zones that won't do that."

Wolff added that he's also faced the same obstacles at other drop zones, where they don't want to take that chance on him.

"In the adaptive world is where we have a lot of roadblocks," Wolff said. "Finding people that are willing to take what is considered abnormal, but to us is normal life and pushing the limitations of what was considered the norm to this new type of adaptive skydiving, that's not really adaptive. We're a skydiver just like everybody else. Adapting is one of the biggest hurdles in trying to find that person that's willing to just consider."

Wolff's end goal is to be able to continue being an example for other people who are trying to break through barriers and to also change the thought process of those who may unintentionally set those barriers. An added bonus is that he has found an activity that he can enjoy with his daughter.

"I always look at what my daughter can do," Wolff said. "From playing with a soccer ball to riding her bike or something like that and being able to see something that her and I can do together. That my injury isn't considered the problem of why we can't do it but the availability to do it or it's something we have to work together to do. I don't have to worry about that barrier anymore."

Newell's goal is to eventually have enough people go through the training to establish a skydiving demonstration team.

"We want to be able to show not only everybody here in the U.S. but the whole world with a disabled demonstration team," Newell said. "To show them that we came to AXIS Flight School and they taught us from Day 1, and go all the way to become a demonstration team of wounded warriors or even wounded individuals in general. Show the world, hey. Get out there and do something. It's not the disability, it's the ability."

ELOY — Karly Chambliss used to wonder if it was possible to dance on air.