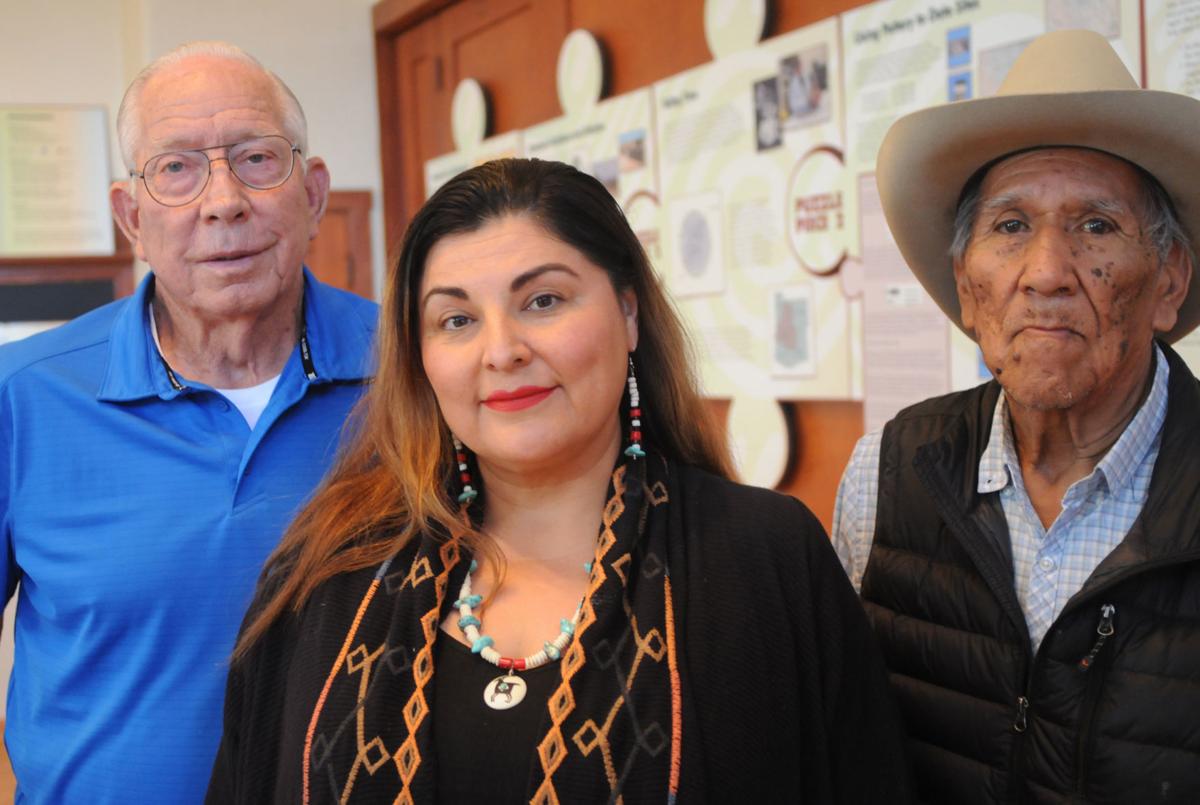 Dick Myers, from left, Brandy Button and Amil Pedro will be on hand for the grand opening of Eloy’s Santa Cruz Valley Historic Museum on Friday. Button and Pedro will take part in events dedicated to the food and culture of Native Americans in Pinal County and Arizona. 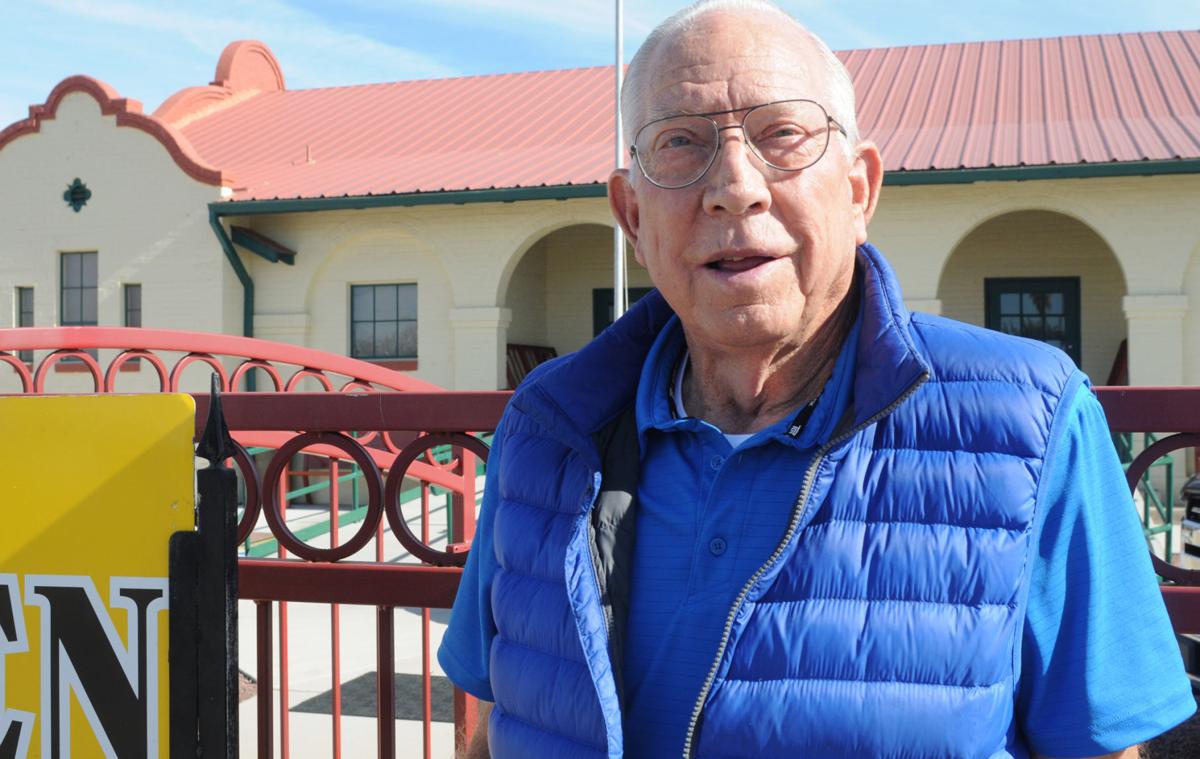 Behind Dick Myers is the old Toltec School he helped restore over a period of 17 years.

Dick Myers, from left, Brandy Button and Amil Pedro will be on hand for the grand opening of Eloy’s Santa Cruz Valley Historic Museum on Friday. Button and Pedro will take part in events dedicated to the food and culture of Native Americans in Pinal County and Arizona.

Behind Dick Myers is the old Toltec School he helped restore over a period of 17 years.

He had a lot of help, sure. But he was the doer. Without Myers, the 1930s mission-style Toltec School might have ended up a pile of rubble. Now it looks as new as the day it opened.

But Myers didn’t put in all those hours just to restore an old building. His aim, all along, was to make it a place of learning, once again. Not just for school children, but anybody interested in the history of Eloy and Pinal County.

Early on, Myers wanted to tell the story of cotton farming and the early settlers who took part. That changed a few years back. He decided to dig deeper into the past and tell the story of the Hohokam, a pre-Columbian civilization that flourished from the time of Christ to about 1450.

That story is the centerpiece of the museum’s grand opening, along with Native American arts, crafts and booths. Doors open at 9 a.m. Friday for Native American Days, which runs through Saturday. Planned events include a textile weaving display.

Amil Pedro will share stories of his culture and history and show how he makes arrowheads and other traditional tools and weapons. Pedro, a Maricopa Indian and member of the Gila River Indian Community, is Myers’ cochair for the event.

He’s also an award-winning artist and speaks the Maricopa and Quechan languages. A few years back, he retired as a tracker for the Maricopa County Sheriff’s Office. He helped to find people lost in the desert.

Brandy Button will be on hand to talk about traditional Pima foods. She is Akimel O’odham and Tohono O’odham on her mother’s side. Those are traditional names for Pima and Papago tribes. Papago is no longer used.

Button’s family runs Ramona Farms near Sacaton, founded by her mother and father, Ramona and Terry Button. Alongside non-traditional crops like wheat and alfalfa, the farm grows a number of traditional Native American foods. The list includes tepary beans, and blue and red varieties of Native American corn.

The main museum’s exhibit is already on display. It lines the walls of the restored Toltec classroom and tells of the life and culture of the Hohokam, who had settlements throughout central Arizona. The exhibit came by way of the Arizona History Museum in Tucson.

Five years ago, the museum offered it to other Arizona museums. Myers put in a request. After another museum backed out, he got a call.

“They asked did I still want it, and I said I’d be there this afternoon to pick it up,” Myers said.

The exhibit came in three large crates. Myers only recently unpacked them. The Hohokam display had to wait on the Toltec school restoration, a 17-year labor of love for Myers. He started in 2003, the year the Sunland Visitor Center leased the building from the Toltec School District.

By then, Myers was already giving tours of cotton farms for the center. He had taken over for Mo Harris, a volunteer who had been hospitalized. Myers was retired. He had put in 30 years as welder for El Paso Natural Gas. Now he had the time.

The visitor center was then housed in the historic Toltec Hotel, across the way from the Toltec school. Cindy Yates volunteered at the center. Her mother, Gerry, ran it.

Gerry had had her eye on the old school, by then abandoned. She, Cindy and Myers approached the district. They worked out a few issues and got the lease. And a building badly in need of repair, let alone restoration.

The museum project was spun off from the visitor center. The Santa Cruz Valley Historic Museum could take tax-exempt donations. Myers is the museum’s board president. He’s also on the Sunland board.

For his time, he has received zero-point-zero in way of compensation. It’s an all-volunteer effort.

“All three of our children went to first and second grade here in the ‘70s,” Myers said.

The restoration involved more than the main schoolhouse. Before integration in the 1950s, African-American children attended a smaller schoolhouse, just south of the main school. Myers led efforts to restore the building, complete with original desks.

It’s now part of the museum.

Others helped, contributing time and money. They included volunteers from the Southwest Archaeological Team out of Mesa, as well as Myers’ own son and other tradesmen.

But only Myers put in 20,000 hours, before he stopped counting (and kept on working.) That was four years ago.

Restoration started with replacing the roof and removing 80 cubic yards of pigeon droppings. Electrical and plumbing work followed. Myers dealt with such details as restoring blackboards to their original color. Black.

Time and injuries have slowed him a bit. He’s fallen a few times. He’ll be 80 in April.

When the city of Eloy stepped in, he welcomed its support. Eloy bought the building and finished the restoration. Otherwise, Myers said, it might have taken another five years.

The small school, in its early days, managed to fit in six grades. And now it houses three separate entities. The Sunland Visitor Center is set up where teachers once led grades six through eight. It’s a big improvement over the trailer the visitor center used to occupy. It was set up outside the school. It’s since been towed.

The Eloy Chamber of Commerce has a small office next to the visitor center.

Most of the space is devoted to the museum. A movable wood panel divides it from the visitor center. A large stage takes up the south end. In days gone by, the classroom accommodated grades three through five. I’m sure they studied math. Maybe they called it arithmetic.

And maybe they did work problems, like calculate the number of hours of work in 9.6 years on the job, assuming 40-hour weeks and no vacations.

ELOY -- At the Dust Bowl Theater on Main Street, J.W. Tidwell could watch two movies and a c…

Coates: Eloy gives boost to historian’s vision for a museum

ELOY — It was in 1926 when Frank W. Shedd & Company donated a 1.7-acre site to the Toltec School District, which was where children living…