FLORENCE — A Superior Court decision ordering the town of Florence to reimburse Florence Copper $1.7 million in legal fees was upheld Tuesday in the Arizona Court of Appeals.

A Maricopa County Superior Court judge awarded Florence Copper those fees in June of 2019 after the company successfully defended itself against the town’s claims that it had lost its right to mine when the town passed new zoning restrictions.

The appeals court Tuesday agreed with the trial court that a development agreement could only be changed by agreement of both parties.

“The court simply enforced the plain terms of a development agreement, itself the product of Arizona law,” the appeals court found. “We do not discount the tension between yesterday’s binding promises and today’s public opinion, but having agreed to the development agreement in 2003, the town must comply with its terms.”

The court further found that previous owner Harrison Merrill testified that he did not intend to abandon his mining rights, and the town offered no evidence to the contrary. Spokesmen for the town and Florence Copper did not immediately respond to requests for comment Tuesday afternoon.

The town argued the fee award was “excessive” and should have been capped at $10,000 under state law, but the Arizona Court of Appeals disagreed:

“The superior court used high-stakes or bet-the-company litigation as a barometer to determine the amount of reasonable fees and discounted Florence Copper’s request by 10%.” Given Maricopa County Superior Court Judge Roger E. Brodman’s long history with the case and the parties, he “is far better suited than this court to determine the amount of reasonable attorney fees,” the appeals court ruled.

“We affirm the superior court’s judgment in all respects.”

Florence Copper, which has been producing copper in a small-scale test phase off Hunt Highway for almost two years, is now awaiting final permits from the U.S. Environmental Protection Agency that would allow it to ramp up to full-scale commercial operations.

The town paid an estimated $1.5 million in legal fees to pursue the case before it was ordered to pay Florence Copper’s fees as well. 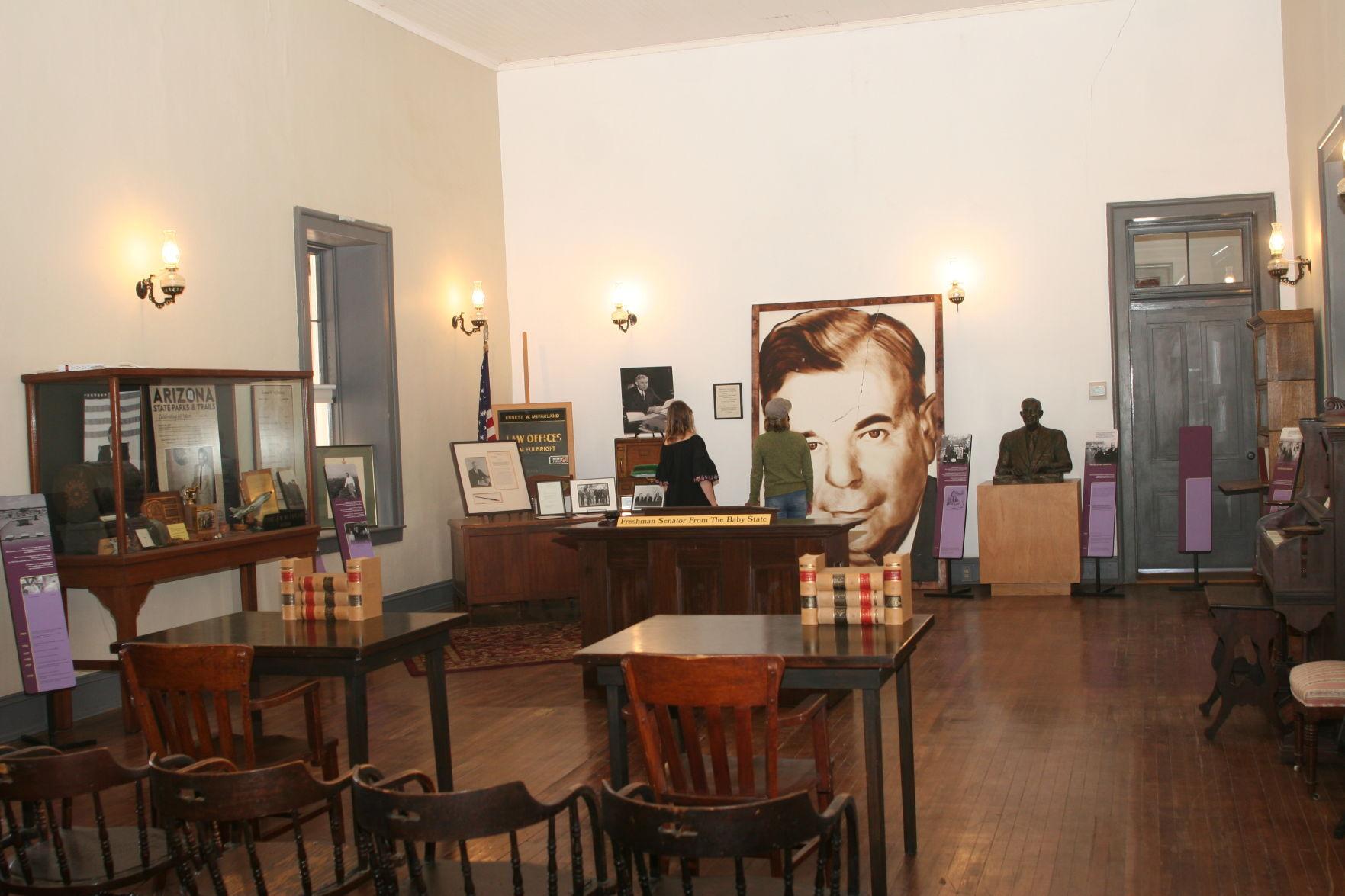 Visitors pause in front of a giant portrait of Ernest McFarland in the redecorated courtroom of McFarland State Park at Main and Ruggles streets in Florence. The building, including the Florence visitor center and gift shop, is open once again after being closed for nearly a year due to the pandemic. Hours are 9 a.m. to 5 p.m. Monday through Saturday. Adult admission is $5.

FLORENCE — The Florence Unified School District had spent almost $2 million in COVID-19 federal grants by the end of the last fiscal year, compared to an average of $202,651 by similar-size school districts, according to a state financial report.

Superintendent Chris Knutsen said these grants helped FUSD compensate for funding lost by lower attendance in the pandemic last year. The amounts cited were spent as of June 30, 2020. Districts may use COVID-19 relief grants from March 2020 through September 2022, according to the Arizona Auditor General's Office.

For the last two years, Pinal County's largest school district has had 18.9 teachers per student. In 2017, 38% of teachers in FUSD were in their first three years of teaching. But improving rates of staff retention had reduced this number to 21% by 2020.

FUSD Finance Director Beverly Myers told the school board recently that the report shows FUSD is “about in the middle” in instructional spending, at 54.8% of its budget, compared to 16 similar districts.

Coolidge was at 52%; Safford was highest at 65.7%. The average was 54.2% among large and medium-large unified and union high school districts in towns and rural areas.

Including student support and instructional support, FUSD spends 67.4% of its budget on teaching. The remainder of the budget — non-classroom spending — includes administration, operations, food service and transportation.

For transportation spending, FUSD was again in the middle in cost per mile ($3.06) and cost per rider ($1,583) among rural districts traveling between 336 and 460 miles per rider. Saddle Mountain had the lowest cost per rider at $968 and Parker had the highest at $2,052. Average cost per rider among the districts was $1,480.

The full report can be found on the Arizona Auditor General’s Office website. A summary can also be found on the FUSD website, fusdaz.com. At the top of the home page, point to “ABOUT US” and click on “Auditor General Report.” Looking at FUSD’s data in comparison to other districts, “we look very good,” Myers told the school board.

“I’m very proud of this report, very happy with it,” board President Denise Guenther said.