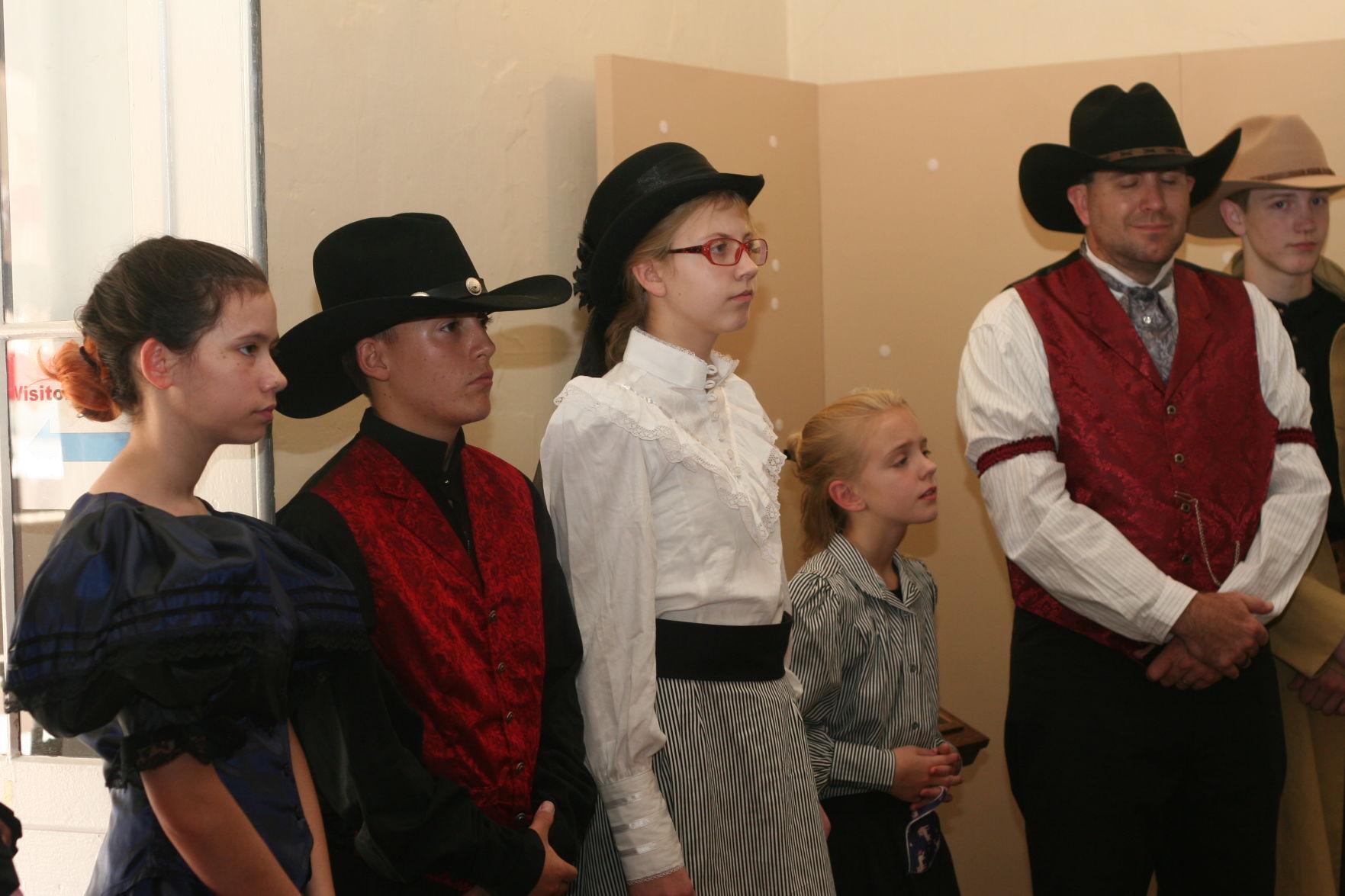 It was standing-room-only in the McFarland State Park courtroom Friday morning as Pearl Hart’s trial began. 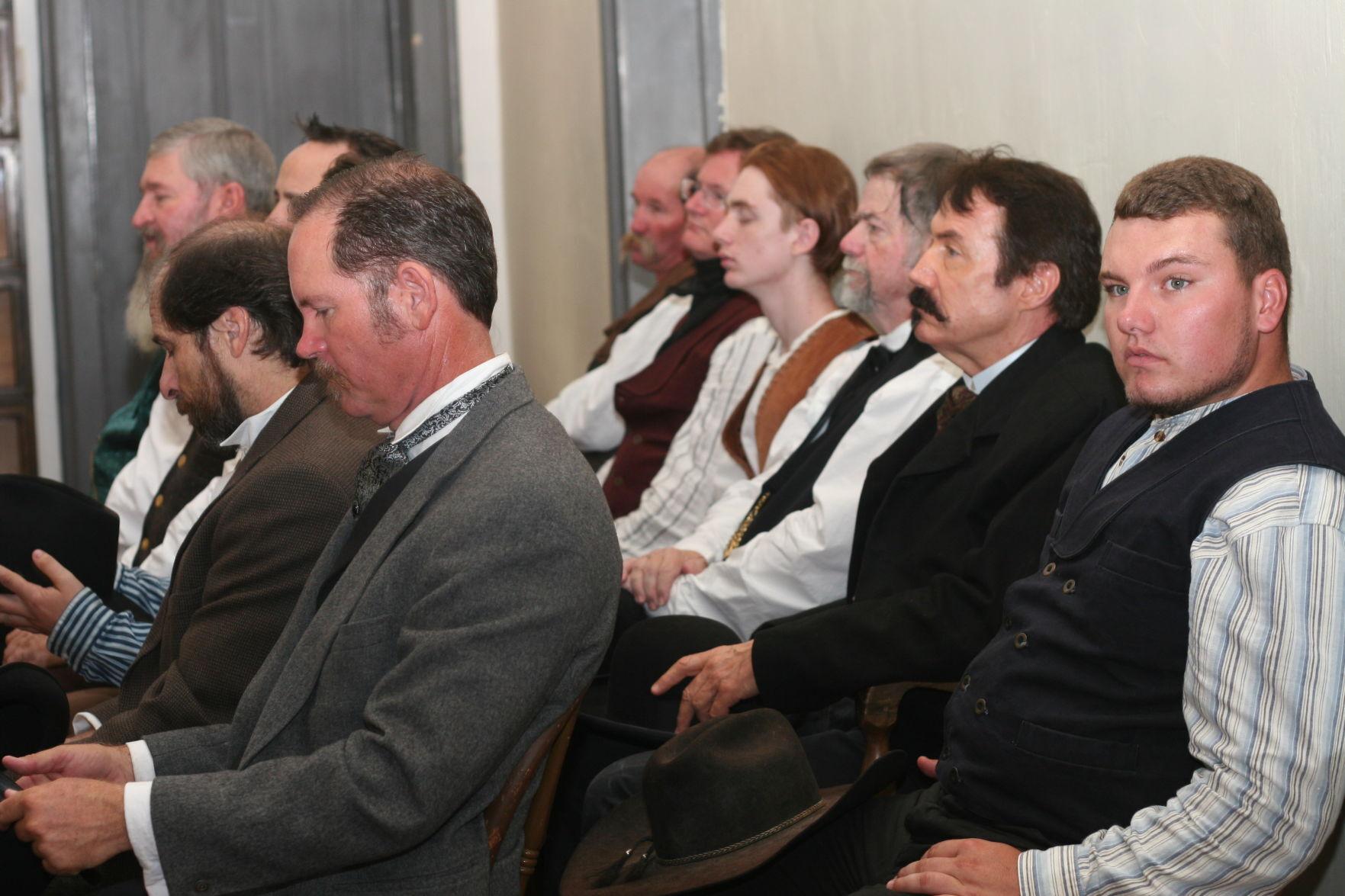 Jurors wait to hear the case against Pearl Hart Friday morning in the last day of filming of “The Woman Who Robbed the Stagecoach” at McFarland State Park in Florence. 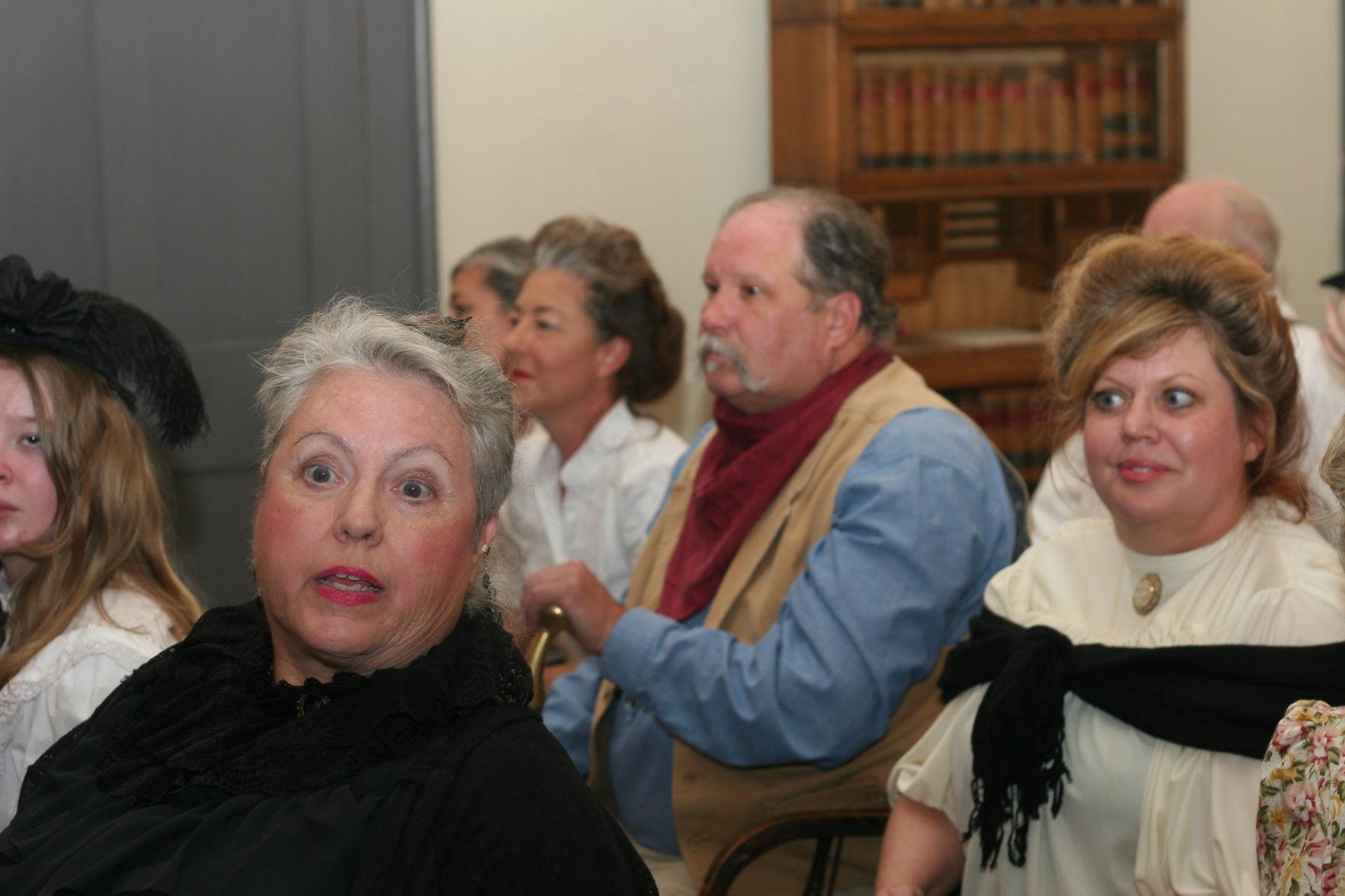 Courtroom observers wait for Pearl Hart’s trial to start Friday morning on the last day of filming for “The Woman Who Robbed the Stagecoach.”

FLORENCE – Five candidates have filed to be write-ins for three open seats on the Florence Unified School District governing board in the Nov. 3 general election.

Bob Dailey, 63, is the only candidate seeking reelection. He is a local business owner and has been on the board for 14 years. Also running is Roger Biede, 50, executive director of the Greater Florence Chamber of Commerce; Sherri Jones, 42, a program development specialist with the Arizona Department of Economic Security, Child Care Administration; Dani Miller, 41, a Realtor; and Tammy Quist, 57, an educational consultant and mortgage broker.

The seats currently held by Dailey, Katrina Solis and Jim Thomas are on the ballot. The Florence Reminder is sending all the candidates a questionnaire on their views for a series of articles beginning next month.

“(We) could not be more excited about what we’re bringing to Pinal County and the town of Florence,” Lyndon Estill, founder and chief operations officer, told PinalCentral by phone Tuesday afternoon.

Estill said he and his associates were expecting the announcement of Legacy Sports Park in Mesa. Legacy, a privately-owned 320-acre multi-use family sports and entertainment complex, will be built next to Phoenix-Mesa Gateway Airport and will open to the public in January 2022, organizers announced.

“We’ve known about things they’ve been doing for years, and we wish them all the luck in the world,” Estill said.

Is there room for two major sports complexes and associated amenities — each over 300 acres — just 30 miles apart?

“Absolutely,” Estill said. “The amateur sports market, as well as the various amenities that are also part of what we’re doing, there’s more than enough market share for both projects to be successful and viable. There’s a vast array of various disciplines in sports, fields and venues we’re bringing to the table. I don’t see a situation where there would be conflict (between) what they’re offering and what we’re offering.

“Because ultimately, all the projects within this field, the aim is to increase and better the amateur sports market. It’s a lot bigger industry than any one of us can take on by ourselves.”

As recently as Aug. 20, Estill told the Florence Planning and Zoning Commission the closest similar development would be ESPN Wide World of Sports near Orlando, Florida. But just over a week later, Legacy was announced.

Estill said Tuesday that the answer he gave on Aug. 20 is still the correct one.

“In no way was it a knock on Legacy,” he said. “When you look at the multitude of offerings from the Wide World of Sports ... I would still say that is the closest comparison (to Grinder’s plan) that we can make.”

The Florence Planning and Zoning Commission is scheduled to hold another public hearing Thursday on Grinder’s request for a Major General Plan Amendment. Grinder is planning a 360-acre residential, commercial, and recreational mixed-use development on North Felix Road, just beyond the current town limits. Grinder’s plans include annexation into the town limits.

Without mentioning Legacy directly, Grinder said in press release Tuesday that it continues to be excited about its relationship with Florence and Pinal County, and its investors and partners are “more invigorated than ever, ready to provide these needed amenities to the community.”

The release also portrayed interest from the Florence Unified School District in using the complex for educational opportunities.

“Grinder understands the planned sports complex is the anchor of the development, but recognizes the vast array of needs by the community and is committed to bring additional amenities to the project that the entire community can enjoy,” the release said. “Restaurants, retail, and leisure activities are just some of the amenities being brought to the total scope of the development in response to many of the concerns that have been brought to light in many conversations with the town of Florence and Pinal County.”

FLORENCE — Grinders Sports takes its name from “the way I play the game, grind it out every day,” Kelly Stinnett, a retired major-league baseb… 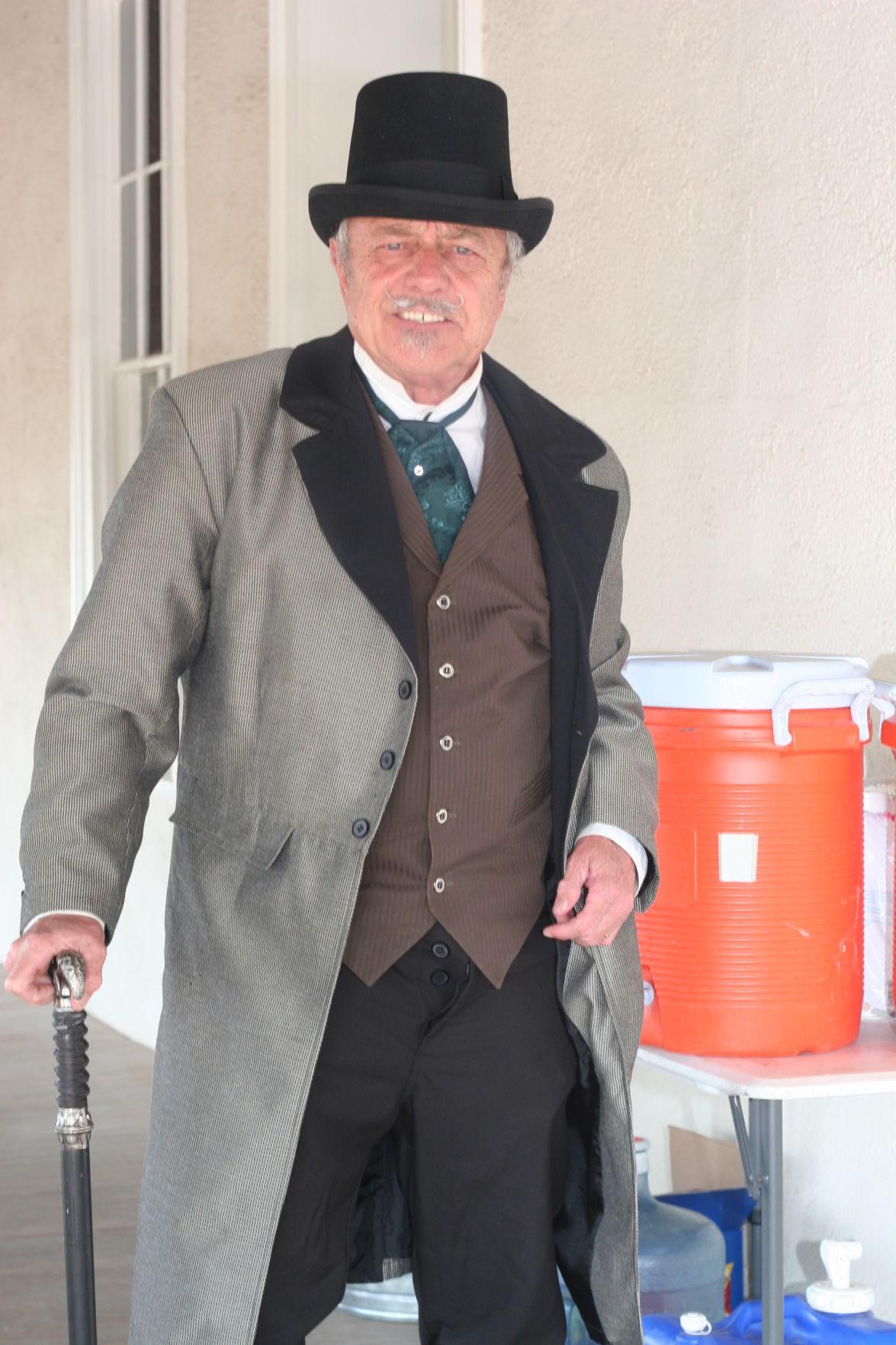 Bookard Dooley of Florence arrives at McFarland State Historic Park Friday morning to be an extra in the movie “The Woman Who Robbed the Stagecoach.”

The Town Council met on Monday at Florence Town Hall.

FLORENCE – The town will disburse $500,000 of its federal COVID-19 relief funding in grants of up to $10,000 each to local businesses and nonprofits. The Town Council will vote to approve the plan, which it’s calling Returning Stronger Grants, at its Sept. 8 regular meeting.

The grants will reimburse businesses, food banks and other nonprofits for the public health measures they’ve taken in recent months, such as personal protective equipment (PPE) and other equipment for the safety of visitors and staff.

Brick-and-mortar businesses would also be eligible for reimbursement for rent or mortgage and utilities in the months of March, April and May. Funding would be first-come, first-served until the maximum is reached.

Awards won’t be based on merit. “If you’ve got the receipts, you qualify,” Ben Bitter, the town’s intergovernmental and communications manager, told the council at Monday’s work session.

The Town Council challenged town staff to come up with a program in which the town’s CARES Act funds could be used to invigorate the local economy. The resulting proposal grew from suggestions received from the business community and discussions between town staff and the Town Council.

Mayor Tara Walter asked if a business has received a grant that didn’t cover all of its loss, can it still apply to the town for the difference? Bitter replied yes.

The town has determined that 63 local businesses have already received Payroll Protection Program forgivable loans of up to $150,000, and one received a loan of perhaps as much as $300,000. The town doesn’t have data on how many may have also applied for or received Economic Injury Disaster Loans or other Small Business Administration (SBA) grants or loans.

In all, the town is receiving $3.1 million in CARES Act funding as reimbursement for its public safety response to COVID-19. A commitment to distribute $500,000 compares favorably to larger cities and towns, who have committed to similar amounts despite receiving much larger CARES Act grants, Bitter told the council.

For example, Queen Creek and Maricopa, despite receiving CARES Act grants of almost $6 million each, have earmarked $500,000 and $559,563, respectively for their communities.

Councilwoman Judy Hughes said she’d like to see the town increase the total amount of the program to $1 million, and called it “our chance to shine for our businesses.” She added she was glad to see the town was including home-based businesses.