The intersection of three streets is currently the only way to access Third Street as it is a one-way street between Main Street and Stuart Boulevard.

ELOY — In an effort to make one intersection easier to navigate for both vehicles and pedestrians, Eloy is working on a plan to improve the five-way junction of Frontier Street, Main Street and Third Street.

While there are still a lot of details left to be ironed out, the City Council on Jan. 25 approved closing Third Street where it intersects with Main and Frontier streets.

The intersection between the three streets is currently the only way to access Third Street, as it is a one-way street between Main Street and Stuart Boulevard.

Frontier Street currently has a turn in each direction toward Main Street. Main Street offers three lanes at the intersection that allow for left and right turns as well continuing straight.

Following the council’s approval, removable bollards will be placed at the intersection near Main Street to close off Third Street, which will become a two-way street that can only be accessed from Stuart Boulevard.

The main reason for eliminating access from Main Street and Frontier Street is to improve the safety for Pinal/Gila Community Child Services, which is located on Third Street.

The city has received comments about the area as some drivers do not obey the one-way rule and often speed through the street as a shortcut.

According to Public Works Director and City Engineer Keith Brown, the purchase and installation of the bollards will cost less than $20,000.

Vice Mayor Andrew Rodriguez expressed his concern about people going through the vacant Sonic restaurant and using the alley to Third Street from Main Street.

“We can’t prohibit access from it,” Brown said. “We can look at putting some signage to deter that. It’s going to be more cumbersome to go through a parking lot and an alleyway.”

Police Chief Chris Vasquez said that it will take some educating efforts from the Police Department and city staff so that the public knows how to access Third Street properly.

“That is a traffic violation, using private property to avoid a traffic control device,” Vasquez said.

He added that initially officers can give out warnings to those who attempt to go through the alley but after a period of time, there will be citations.

With help from Horrocks Engineering, the city looked at several ways to improve the intersection including narrowing streets and adding a roundabout.

“If you’ve ever traversed that intersection, there’s a lot going on there to try to make a turn in a car or if you’re a pedestrian, there’s a lot of different ways you have to look to try to cross those streets,” Brown said.

Councilman Georges Reuter is a big fan of roundabouts and has pushed for adding them in difficult to navigate areas.

Brown told the council that a roundabout is not the best option for this intersection because the cost is high and the proximity to the railroad could cause a long backup when a train was passing through.

“Due to the turning lane (on Frontier Street) we can’t have the crosswalk through there,” Brown said. “We’re pushing it back to before that turn lane. All these actions are to assist the pedestrians to make is safer and they don’t have these large areas of pavement to have to cross.”

Brown told the council that apart from the installation of the bollards to close off access to Third Street, the rest of the plans for the intersection are conceptual ideas for a later time.

During the meeting the council also adopted an ordinance to rezone five parcels on the southwest corner of Hanna and Sunland Gin roads.

The City Council also accepted the comprehensive annual financial audit for fiscal year 2019-20, which was completed by Heinfeld, Meech & Co.

ELOY — It began with an Eloy resident trying to find a way to bring more trees to the city.

How close should a marijuana dispensary be to a bar? Eloy council discusses
By MARIA VASQUEZ Staff Writer
Updated Feb 9, 2021

ELOY — While many other cities have been quick to restrict the use of recreational marijuana, the city of Eloy is taking a different approach.

ELOY — Changes are likely for the various city boards and commissions after a long discussion Jan. 4 during a City Council work session.

ELOY — Dressing up the city water tower has been one of Vice Mayor Andrew Rodriguez’s main goals for the past six years.

ELOY — The Eloy City Council decided Monday to update pay to 100% of market after a compensation study, including reclassifying job titles and…

ELOY — Municipal clerk is possibly the oldest profession as it can be traced back to before Biblical times. Then again there’s no real way of knowing how long it’s been around since the clerks are the ones who keep the records.

Ancient Greece had city secretaries who read official documents publicly. In the eighth century, the Frankish kings of France depended on the mayor of the palace, who performed clerical and administrative tasks ranging from collecting taxes and fees to publishing documents and keeping state records.

Over time other parts of the world also adopted some variation of a town clerk.

In Eloy for nearly three decades, Mary Myers has read official documents publicly in addition to publishing those documents, kept records of meetings and done everything else that has been added to the list of duties of a municipal clerk.

Earlier this month Myers was notified that she had been awarded the designation of Master Municipal Clerk, which is awarded by the International Institute of Municipal Clerks Inc. It is a designation given only to those clerks who complete demanding education requirements and have a record of significant contributions to their local government, community and state.

“I’m really happy,” Myers said. “When they sent me the email that I met the requirements I was like, ‘Are you sure? Am I reading this right?’ I sent them an email and the lady said, ‘If they’re congratulating you, then yeah, you got it.’ And I said, ‘Yippy!’ I’m so happy. I was very excited to get it.”

Myers is an all-round Pinal County resident. She was born in Maricopa, she went to school in Casa Grande and, although she lived in California for a few years, she found her way back home and has lived in Eloy since the early 1990s.

Ever since she was teenager, Myers has always felt a connection with the Eloy community. While she was going to school in Casa Grande, she had a lot of friends in the area.

“I already knew the people here,” she said. “I didn’t go to school with them, but we were friends, we would party together. They had parties down here and we would always come down here because the boys were a whole lot cuter than the boys in Casa Grande.”

Myers already had a bond with the community before she started working for the city, but over the past 30 years that bond has strengthened not only with the public but also with the City Council and the city staff.

“I like to laugh, I like to have a good time but at the same time I know that we have business that we have to take care of,” she said. “You have to have that respect too with the council, and they respect me. It’s a back-and-forth thing but it’s nice when you can laugh at yourself or something silly that they have done or said.”

She added that the council, her coworkers and the community have always been very supportive.

Over the course of her career Myers has racked up every recognition possible, with the designation of Master Municipal Clerk being the final rung on the ladder.

Although she has made it all the way to the top, Myers added that she still plans on continuing her training to be the best she can be.

“I do it because the people deserve it,” she said. “The residents deserve for me to give them my best and one way I can do that is to continue the training, continue the education to continue to provide them with all the information that they need. I’m going to continue to go to workshops and as far as certifications and designations, I’ve gone as far as I can go but that doesn’t mean that I have to stop learning, so I will continue with that.”

As city clerk, Myers has to stay up to date with laws so that she can provide the public with accurate information. While some people may believe that the city clerk position is somewhat of a glorified secretarial position, it is much more than just transcribing minutes and serving the council.

One of the many tasks that a city clerk has is staying up to date with election laws. Clerks need to have the correct information for potential candidates as well as the voters so that they can register to vote and that their ballot is counted.

“If we mess up we could throw a whole election off,” Myers said. “An election can be invalid or candidates may not be able to run if we give them the wrong information. You’re kind of like the peacemaker with the council to a certain degree, you often hear them, ‘Oh, Mary keeps us on the straight and narrow.’ Yeah, I try to do that but when you’re talking about seven different people, that can be difficult. I think people assume that this is kind of an easy job and it really isn’t.”

Initially she began as an administrative assistant to the city manager and was named interim city clerk about two years later and has held that position ever since.

The newly elected council recently reappointed her to another two-year contract, which is good until December 2022. 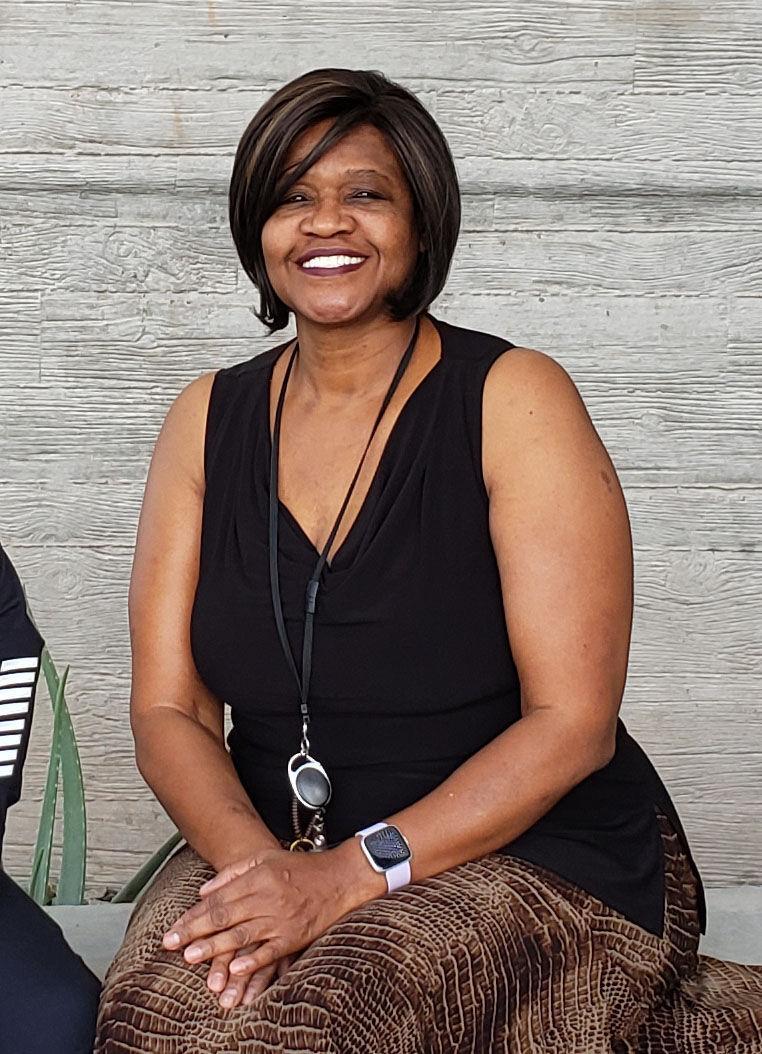 Myers told PinalCentral that retirement is in her near future, but anyone who has attended a City Council meeting can tell that it’s going to be difficult for the council to let her go.

“I hope they don’t hold me hostage,” Myers said. “Sometimes it brings tears to my eyes, how much they appreciate me. It’s not about money all the time, it’s sometimes about the gratification and saying, thank you we really appreciate what you do, that goes a long way for me. It makes me feel good that a lot of them don’t want me to go but I want to leave on a high note too. I don’t want to leave because they no longer want me here or I’ve gotten too old and I’ve made mistake after mistake after mistake. I want to go out on a high note.”

It was 1989 when Myers first began working with the city of Eloy as something she thought would be just a job, but has since turned into an illustrious career.

“You have your good days and you have your bad days,” she said. “Some days I’ll think I don’t want to do this anymore, this is crazy and then there’s times where I’m like, ‘Man, I can’t imagine myself doing anything else.’ We’ve gone through some hard times here, I’ve seen some tough times but you just hang tight and it does get better. I feel really blessed to have this job. I’m thankful every day that I have this job.”