ELOY — Following two discussions about establishing a vice mayor term, the Eloy City Council finally decided to make it a one-year post, and named Andrew Rodriguez to the position.

Councilman Georges Reuter nominated Rodriguez on Monday to be the first vice mayor under the newly established term.

“After all those years of hard work, he should be the first one, and I think it would be the best example also to have the mayor in Toltec and the vice mayor in downtown,” Reuter said of the residencies of the two people filling the positions.

After several years of serving on the council and as vice mayor, Micah Powell was elected mayor in the August primary election this year.

Rodriguez was first elected to the City Council in November 2014.

During the council meeting there was a public hearing on the proposed annexation of 449 acres into the corporate limits of Eloy.

The two areas discussed included 374 acres near South Vail Road and Phillips Road, crossing Milligan Road. The area includes Eloy Memorial Park, according to Planning Manager Jerry Stabley. Although the city owns the cemetery, it was never added to the city limits.

The other area is 74 acres near Sunland Gin and Hanna roads. Located in that area is the Quality Inn and the access road to Las Colinas RV Park.

Stabley told the council that Las Colinas is not interested in being incorporated and will only do so when it absolutely needs to use the city’s sewer system. Stabley added that Las Colinas currently uses septic tanks.

“We’ve talked to them multiple times about coming into the city and they are absolutely dead set against it,” Stabley said.

Another challenge the city has faced is that when the process first started, many property owners were on board with the idea. Since there has been a change of ownership, it has caused a lack of signatures needed for the annexations.

Former Councilman J.W. Tidwell, who was in the audience, asked how the city would benefit from these annexations.

Stabley pointed out that the Nikola truck factory will be located near the area of Milligan Road and that Lucid Motors has intentions of using a warehouse near the Sunland Gin location.

“There will be a lot of opportunities for development in this part of the city,” Stabley said of the Milligan Road location.

He added that the property owners of the Sunland Gin area recognize the opportunity and they want to develop and that a city sewer line is more accessible than the system of the city of Casa Grande.

Other business discussed during the council meeting included:

ELOY — In its first work session with newly elected members, Eloy City Council discussed what is to be expected of each other as city official…

ELOY — Due to the recent spike in positive COVID-19 cases, the city of Eloy is reminding residents that face coverings are a requirement.

ELOY — In August, a group of Cuban asylum seekers held by Immigration and Customs Enforcement at the La Palma Correctional Center detailed how detainees who fell ill with coronavirus symptoms were put into isolation instead of receiving treatment.

“People with COVID-19 are treated with water and Tylenol. They don’t test people for COVID-19 even if you have symptoms, they only take your temperature,” they wrote in a letter. “There is no other type of medicine, only isolation. The medics and guards say it is not their fault if we catch the virus; they say we are strong and healthy and we can tolerate the virus.”

CoreCivic, the company that runs both the Eloy Detention Center and La Palma, denied the allegations made by the Cuban detainees.

“Any allegations that imply that detainees ‘with COVID-19 are treated with water and Tylenol,’ or that we ‘don’t test people for COVID-19 even if you have symptoms’ are false,” the company said in a statement.

The private prison company also said it doesn’t place sick detainees into “solitary confinement” or “isolation,” but it does place them into “cohorts” to curb the spread.

“Solitary confinement, whether as a term or practice, does not exist at any of the facilities we operate. During cohorting, there is no loss of privileges or activities,” CoreCivic said.

An Arizona Mirror analysis of historical COVID-19 reporting data of ICE detention facilities in Arizona shows the agency took two months between testing neighboring facilities while the virus spread at a rapid pace.

La Palma at one point had more cases of COVID-19 than any other ICE facility in the nation.

The first reported case of the virus was back in April when a 45-year-old Guatemalan immigrant tested positive for the virus. ICE wouldn’t report a surge of positive cases in La Palma until late August.

Meanwhile, through letters sent in April and May to local community groups and members of congress, dozens of people held in La Palma warned of the spread of the virus. They painted a grim picture of detention conditions, sometimes saying that they feared for their lives.

They pleaded for better medical attention and appropriate measures to protect their health during a global pandemic.

In an April 16 letter, Joel Edgardo Cornejo claimed he was struck with paintballs and pepper gas was used in his pod after a group of detainees conducted a strike over the protest of sick detainees.

In another April 30 missive, 32 detainees who have conditions that put them at high risk of falling severely ill from COVID-19 said they “have a deep fear of becoming infected and dying far from our families” and asked to be released from detention.

In a May 18 letter, more than 25 detainees denounced lax measures to prevent the spread of COVID-19 inside La Palma.

“There are 120 of us in a small space and that is how the pandemic propagates faster,” they wrote. “The entrance of personnel and other workers is the biggest source of danger of it entering the tank.”

The contents of an August letter sent to local community group Trans Queer Pueblo are pictured. The letter was authored by 11 Cuban asylum-seekers detained at La Palma Correctional Center, the ICE detention facility with the most COVID-19 positive cases. Photo courtesy of Trans Queer Pueblo 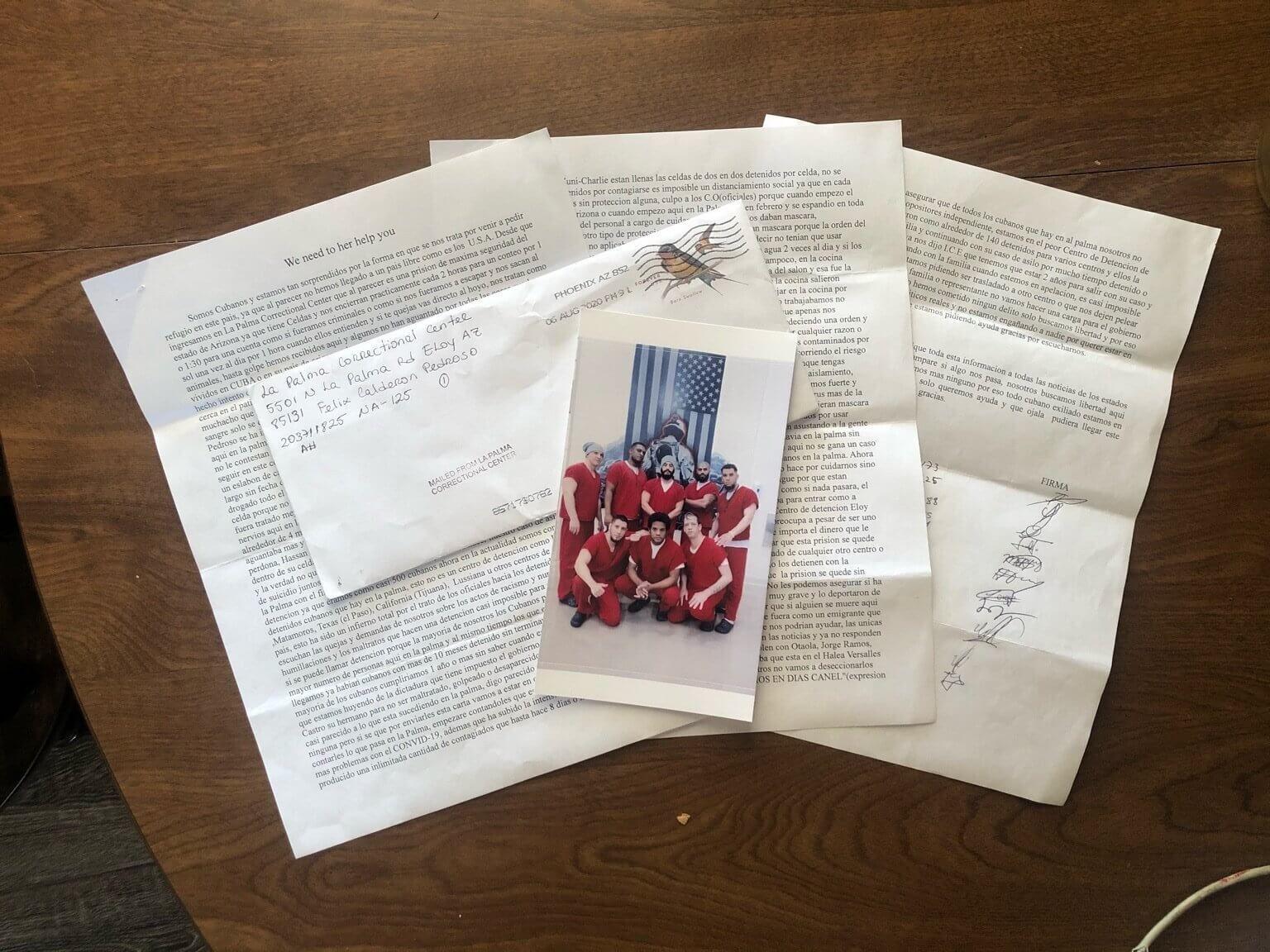 The contents of an August letter sent to local community group Trans Queer Pueblo are pictured. The letter was authored by 11 Cuban asylum-seekers detained at La Palma Correctional Center, the ICE detention facility with the most COVID-19 positive cases.

Data gathered by the Vera Institute of Justice, has been downloading data from ICE’s COVID-19 website every hour to create a historical database, shows that at the La Palma facility on Aug. 28, there was a 189% increase in the number of cases. Outlets reported on this increase in cases at the time, but the other Eloy facility had a similar spike 2 months prior.

The 460% spike in cases at the Eloy Detention Center was updated to ICE’s website on June 15. ICE Public Affairs Officer Yasmeen Pitts O’Keefe said the facility had received additional testing kits, which led to the discovery of the cases.

“In mid-June, ICE health care workers at the Eloy Detention Center (EDC) conducted testing of all detainees as part of a continuing effort to test those who were asymptomatic,” O’Keefe said. “In late August, ICE was able to expand testing to the La Palma Correctional Center (LPCC) for all detainees. This testing included over 1,000 detainees, most of whom were also asymptomatic.”

For both Eloy and La Palma, after the spikes, cases begin to plateau. At ICE’s two other facilities in nearby Florence, there are not similar spikes, but more gradual climbs upwards.

However, by looking at the historical data, it is easier to see a fuller picture how quickly the virus spread.

“ICE remains committed to providing accurate and timely information all while keeping in compliance with CDC guidelines,” O’Keefe said in a statement in response to Mirror questions as to why the agency does not put historical data on the agency’s website.

The additional testing conducted in June and August by ICE has led the agency to begin conducting COVID-19 testing during intake to “mitigate further transmission of COVID-19 within the facilities,” O’Keefe said.

ELOY — The La Palma Correctional Center in Eloy was not what Javier Ferrer was expecting when he came to the U.S. seeking to escape from the d…

ELOY — In the six months Maria Chávez’s husband has been detained at La Palma Correctional Center, he has been quarantined twice after being e…

ELOY — Nearly half the employees at the Eloy Detention Center have tested positive for COVID-19, the private company operating the facility says.

PHOENIX — Groups representing detained and incarcerated illegal immigrants and their family members gathered to protest outside of Gov. Doug D…

ELOY — Three days after U.S. Immigration and Customs Enforcement officials claimed in court filings that there were no longer any active or su…

3 men arrested in Maricopa area with guns stolen from Coolidge

ELOY — In August, the City Council agreed to use $100,000 of federal CARES Act money it received from the state to assist residents through the Community Action Human Resources Agency.

A portion of that money went to the Santa Cruz Food Pantry, as $30,000 could assist a minimum of 300 households.

CAHRA will also provide food boxes to other churches such as St. Helen of the Cross Catholic Church, Estrella Community Church and First Baptist Church.

Along with the different churches, the Eloy Veterans Center will also receive boxes.

“Anyone who is interested in receiving a food box that has been affected by COVID can contact us,” Rangel said. “Or if they need utility assistance or rental assistance. There is an application process for both programs.”

Rangel added that people from the churches can also reach out to their pastors if they would like assistance.

“It is very needed,” Rangel said. “There are a lot of families here in Eloy that have been affected by it. We are working with the local churches who have vetted a lot of families and have referred quite a few over to us already.”

The rest of the money went to the purchase of a freezer for the food pantry.

CAHRA is also providing help through the food pantry to families that have not been affected by COVID-19.

Rangel mentioned that CAHRA will continue to provide food boxes as long as the funds last.

“When we did the initial request, we said we were going to do 300 boxes,” she said. “It is specifically for those residents that live in Eloy and Toltec proper.”

Related
+2 Rosales as much an institution as CAHRA
By MARIA VASQUEZ Staff Writer
Updated Dec 4, 2020

ELOY — Mary Lou Rosales took over the Community Action Human Resources Agency in 1983 but it wasn’t her choice to become the executive director.

ELOY — The city will use $100,000 of the CARES Act money it received from the state to assist residents through the Community Action Human Res…