Nikola holds a brief ceremony during the raising of the plant’s first vertical steel beam on Dec. 29.

COOLIDGE — Nikola Motor Company’s truck manufacturing plant, still under construction, has been presented as a potential boon for the local economy.

At a virtual luncheon last month for the Coolidge Chamber of Commerce, Nikola’s head of global manufacturing, Mark Duchesne, also highlighted the company’s environmental impact through the manufacture of electric vehicle trucks.

“We have to get off fossil fuels,” Duchesne said. “We are trying to produce a product that will be better for the environment. Are EV trucks the right alternative? We don’t know, but it is the best we have with available technology right now.”

Duchesne said that the company’s environmental commitment extends to facilities.

Over the next three years, Duchesne said the company hopes to slowly ramp up production numbers of the Nikola Tre and Nikola Two truck models. The two trucks will run on electric and hydrogen fuel cells, respectively. Both kinds of power are considered potential solutions for renewable energy, although the latter requires yet-to-be-constructed hydrogen stations.

What kind of impact will greening the truck sector have on mitigating climate change? According to Union of Concerned Scientists vehicles analyst Jimmy O’Dea, trucks have a disproportionate carbon footprint. Although they only represent about 5% of vehicles on the road in the U.S., they contribute over 25% of carbon emissions. Trucks are bigger vehicles, so they have lower fuel efficiency, and they travel more miles.

Another consideration is the materials footprint. While there aren’t clear statistics for trucks, O’Dea said most cars clear their carbon “debt” within six to 12 months on the road. Nikola representatives estimate that its trucks will have a lifespan of eight to 10 years.

O’Dea said Nikola has a major edge over older legacy companies because they don’t have to worry about the dual concerns of transitioning to EV and improving fuel economy for diesel, which O’Dea described as competing interests.

“The sooner the big traditional companies can make commitments to shift their entire business model to electric, the better,” O’Dea said. “But electric-only companies will have a technology advantage.”

O’Dea said that the ultimate impact of companies like Nikola will depend on how fast the electric grid can switch to renewables and how effective local and federal regulation is at shaping technological change.

“I think the new Biden administration will be interested in playing a role and not just leaving it to a state-by-state effort,” O’Dea said.

That could cause tension with the government in Phoenix; Arizona Gov. Doug Ducey has backed recent legislative efforts to block renewable energy requirements.

The most aggressive regulation promoting EVs has come from Arizona’s neighbor, California, which passed an Advanced Clean Trucks standard last spring requiring truck manufacturers to have a portion of their fleet be battery or fuel cell vehicles by model year 2024.

Currently, most hydrogen for fuel cells in the U.S. is coming from natural gas, which still creates 33% less emissions than diesel fuel. Nikola has already committed to building its own hydrogen fueling stations. The stated plan is for building a string of hydrogen stations along the I-10 corridor between Phoenix and Los Angeles.

According to Pat Graham, 20-year director of the Nature Conservatory’s Arizona chapter, converting both trucks and personal vehicles to EV or hydrogen could also dramatically lower tailpipe emissions, a major concern in metro areas like Phoenix or Tucson. Fuel exhaust not only causes pollution and creates health problems, but exacerbates the urban heat island affect which makes cities hotter than surrounding areas.

In December of last year Graham became interim director of the Arizona Thrives Alliance, a coalition of businesses, government and conservation groups to identify solutions for Arizona’s environmental future. Graham praised Pinal County for being on the leading edge of blending economic and environmental opportunity.

“Who would have imagined 10 years ago that Arizona would be a location for Lucid and Nikola?” Graham said.

According to Graham, Arizona remains a prime location for expansion of solar, the cost of which continues to decline.

“People think of solar as just going from panels to the grid and you use it to power your iPhone or run AC,” Graham said, “but it offers an opportunity to make hydrogen for fuel cells. With long haul trucking, if you can create clean fuel sources you can get at those parts of the economy where it’s hard to reduce emissions.”

O’Dea said that while interest and enthusiasm for Nikola and other emerging businesses is good, the environmental challenge is still extraordinary.

“I’m optimistic about what the technology allows to be possible,” O’Dea said. “I am fearful of how big the problem is and how far and fast we need to go. The harsh reality is it has taken laws and policies actually requiring these transitions and technology turnovers to move the needle. That’s the lesson history gives us.”

A Coolidge Unified School District staff member prepares to receive a COVID-19 vaccination shot Feb. 3 at a clinic at the district office.

COOLIDGE — The Coolidge Unified School District has been engaged in a remote learning model since the end of last year. However, while the benchmarks remain in the red countywide, Coolidge took a major step toward an eventual reopening of schools this week.

On Wednesday, the district partnered with Sun Life Family Health Center and the Pinal County Health Department to hold a vaccine clinic for staff who had not yet been immunized.

According to Human Resources Director Dawn Hodge, approximately one-third of all CUSD staff received an initial dose of the COVID-19 vaccine at the clinic, which was held in the district office. That did not include staff members who had gotten a vaccination or appointment already.

Superintendent Charie Wallace was hopeful that by the end of next week, around 60% of district employees will have gotten at least the first dose. While Wallace believed that the process would expedite a reopening, she cautioned there was still a way to go.

“It is frustrating if you can’t get a vaccine,” Wallace said, “but the vaccine is difficult to make and then vaccinating everybody state or nationwide is just a huge, awesome undertaking.”

Wallace said that some reasons staff has opted to forgo the vaccine included pregnancy or going through treatment for cancer or other illnesses.

“We’re not going to strong-arm anybody,” Wallace said of the vaccinations. “But we haven’t had anybody say or give a reason like ‘we don’t believe in this’ or anything like that.”

All those who were vaccinated on Wednesday are scheduled to get their second dose on March 3 at the district office. The County Health Department has also opened some extra spots for CUSD staff this coming Saturday and Tuesday at the department’s Coolidge Clinic on Central Avenue.

Health officials say only 30,000 vaccinated in Pinal County so far amid shortages

“We recognize that learning online has creating challenges to many students’ social, emotional and educational wellbeing,” Coolidge principals Rachel Hernandez and Clara Thigpen said in a joint letter to families. “Our intention is to continue offering in-person instruction without interruption for the remainder of the year.”

The letter also said the decision was based both on medical benchmarks but also considering the needs of students, teachers and staff. Those returning to school will still be expected to adhere to quarantine protocols including masks and physical distancing.

The letter also reminded parents that the pandemic was a “fluid situation” and that the schools’ plans were subject to change based on additional factors or state guidance.

According to City Manager Rick Miller, work will be done on east-west roads between Arizona Boulevard and Ninth Street, and north-south between West Pima and West Wilson avenues.

“These roads have been in bad shape for a number of years,” Miller said during Monday’s City Council meeting. “It’s really good to see the public works crew put forth the effort to have these roads improved.”

Miller also said city officials would be meeting with the San Carlos Irrigation and Drainage District to design and relocate irrigation pipes along Northern Avenue for road improvements in preparation for the new aquatics center. Miller expected the work to be done by sometime in March.

During the meeting, Mayor Jon Thompson noted another potential engineering project, addressing odor problems at the wastewater treatment plant. Thompson said the city has been getting complaints about the odor for over a year, and that officials have finally found someone who can work on the issue.

Several council members, including Thompson, also took time to praise the Coolidge Police Department, and residents of the city, for their primary role in capturing escaped inmates David Harmon and John Charpiot in January.

“No only did citizens do a great job,” Vice Mayor Steve Hudson said, “but the Coolidge Police Department and Commander (Mark) Tercero were professional and did a great job as well. I just want to thank you all.”

Hudson also said he hoped that the reward money would be spread equally among those who had helped, including the family whose wife was injured in the events leading up to their capture.

Earlier in the meeting, the council finalized adoption of zoning code changes regarding marijuana uses. The council had adjusted language over the past few months to account for Proposition 207’s passing, which legalized recreational marijuana in Arizona. The ordinance, which was approved at the previous meeting, limits recreational marijuana sales to existing medical dispensaries and extends the “exclusion boundary” to 1,000 feet.

The council also approved $265,000 in grant funding to be awarded to the Police Department by the Arizona Department of Homeland Security, and for allocating up to $400,000 for Kimley-Horn to prepare an Airport Master Plan for submission to the city. 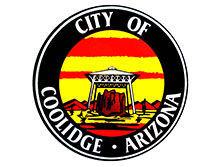