The proposed interior of the new Popshelf store in Casa Grande is slated to have 9,023 square feet of space.

According to a representative from the construction company, this model of Dollar General is a new style, known as “Popshelf,” that has better lighting, more refrigeration and includes home decor.

According to a press release from Dollar General, the company hopes to have 30 Popshelf locations in various markets by the end of fiscal year 2021.

Along with home decor, the new Popshelf, will feature beauty items, cleaning supplies, party goods and more — with the majority of items costing $5 or less, the company said. Popshelf will be geared toward women who live in suburban areas and have an annual household income ranging from $50,000 to $125,000, the company said.

The store was approved with a technical modification to the Major Site Plan to provide for a wall along the northern and western boundaries with a residentially designated area. According to the agenda, the wall is to be 6 feet in height as measured from the grade of the abutting property.

During the meeting, the commission also approved a conditional use permit to allow a residential dwelling unit for a business owner, Marcus Romero, on the second floor at 417 N. Florence St. downtown.

The vacant second story will be remodeled into a residential unit while the first floor will be utilized as a storefront for Casa Grande Skate Shop.

According to the agenda, this would be one of the first, if not the first live-work spaces located in the downtown area. Staff believes this would be a great opportunity to incorporate a mixed-use project in the area as it has been emphasized in the current 2020 General Plan and the proposed 2030 General Plan.

“I just want to commend you on doing what you’re doing,” Commissioner Mikel McBride said. “It’s really going to put something for Casa Grande, it’s going to hopefully start a trend on people moving to the downtown area — something that we’ve been wanting for a long time.”

Casa Grande Skate Shop is locally and veteran owned, according to its Facebook page.

According to Romero, he hopes to open the shop around March 1.

MARICOPA -- Whether it’s supporting each other after a tough day or being a voice of encouragement during a grueling three-day, 60-mile charity walk, Justin Sansaver and Lauren Conley say working together as a team and helping each other through challenges is the secret to lasting romance.

“We’re an amazing team,” Sansaver said. “Our two kids are the center of our world and no matter how crazy the world gets, we have each other. We keep each other going.”

Sansaver and Conley, who met at Harrah’s Ak-Chin Casino, where they both work, recently celebrated their 12th anniversary.

They enjoy a variety of hobbies and activities, including fishing, traveling and discovering new foods, and share a passion for taking part in charitable walks.

“We’ve done lots of fundraising walks together,” Sansaver said. “Our oldest son has autism so we do the autism walk every year.” 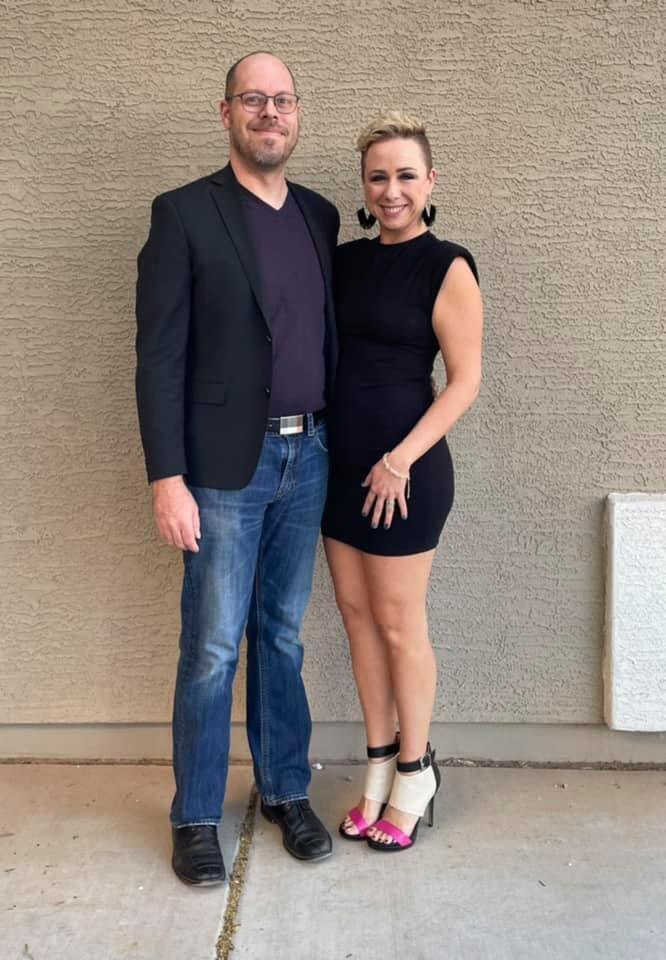 Over the years, the couple has taken part in the Pat Tillman Run in Phoenix, the Phoenix Heart Walk and dozens of other events.

For their most grueling fundraising walk, they recently traveled to San Diego to take part in the Susan G. Komen three-day, 60-mile walk to raise money and awareness for breast cancer.

“It’s a tough walk,” Conley said. “The route goes up steep hills and covers 20 miles each day for three days. By the third day, we had blisters on top of blisters.”

Throughout the walk, both had moments in which they wanted to quit.

“We kept each other going,” Conley said. “We were walking alongside cancer survivors and patients undergoing chemotherapy and that encouraged us to keep going.”

Conley and Sansaver each raised $2,300 to contribute to the fundraiser during the walk.

“The fundraising goals for the walk are very lofty and it felt good to raise that much money,” said Conley, who serves on the Harrah’s Breast Cancer Awareness Committee. “A few years ago, my aunt was diagnosed with breast cancer so that’s what made me decide to do the walk.”

The Harrah’s Ak-Chin HERO program also encouraged them to achieve their fundraising goals and take part in the walk, she said.

Conley said although the three-day walk was a challenge, the couple are now looking forward to taking part in a similar Susan G. Komen event in Chicago either later this year or next year.

Sansaver, a slot performance manager at the casino, and Conley, who works in human resources, live in Maricopa. They met in 2007 when Conley was new to the company. Sansaver had worked for the company for several years, since moving to the area from Montana in 2001.

When the couple met, it wasn’t love at first sight, Conley said.

“Initially, we were both cage supervisors and worked together,” Conley said. “That’s how we met. In those days, I think we were both spending more time at work than at home and we had the same social circle of co-workers. Neither one of us was looking for a relationship. But after we knew each other for a while, we started spending time together, working out and going out to eat. The universe has a funny way of telling you which way to go.” 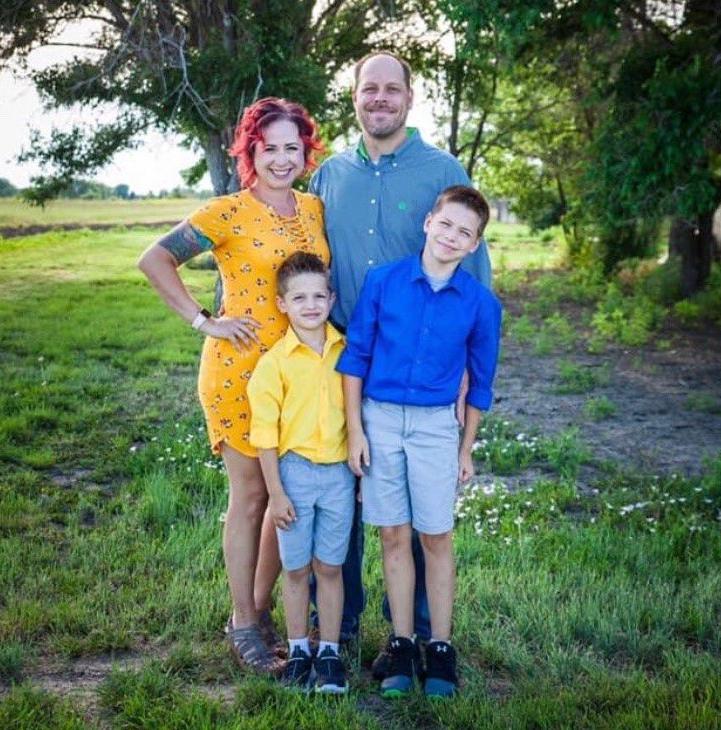 Lauren Conley and Justin Sansaver are parents to two sons.

They balance the challenges of working together by staying focused on their family and keeping work and family time separate, she said.

“At work we sometimes interact and find time to sit down and chat for a few minutes,” Conley said. “But we avoid talking about business stuff. I work in Human Resources and if he needs HR stuff, he goes to a different manager. But in some ways, Harrah’s is like our extended family. Everyone has been here a long time so we all get to know each other like family.”

Outside of work and charity walks, the couple enjoy exploring new places and things together.

“We enjoy spoiling each other and going to fancy dinners and trying new foods,” Conley said. “I had always wanted to try bone marrow so for my last birthday he took me to a restaurant in Scottsdale so I could try it. I loved it.”

During the early months of the COVID-19 pandemic, the casino was closed for three months and both Conley and Sansaver were out of work.

“That could have been a very tough time for us, but we were actually grateful that we both worked for the casino because we both continued to get paid when the casino was closed,” Conley said. “It was another one of those challenges we helped each other through.”

“Our goal obviously is to work with the county and make sure that the members of the community in San Tan Valley are taken into consideration, that their voices are heard, and we can be a tool utilized between the county and that community,” Joseph McKnight, chairman of the new San Tan Valley Advisory Council, told the Board of Supervisors Wednesday.

He said council members wanted to present their plans to the supervisors “to make sure we’re on the right track.” The council’s mission includes advocating for the views and priorities of the community and working with Pinal County to implement the county’s strategic plan for their area, known as the San Tan Valley Special Area Plan.

In addition to McKnight, the advisory council board consists of Vice Chairman Jeanne Stockton and Treasurer Barbara Taylor. McKnight said they’re currently interviewing for at least two additional directors. McKnight said they’re looking for members in the far north as well as the far south to represent all of San Tan Valley.

McKnight said the advisory council wants to assist the county in its communications with the community and expects to focus on business development, health and welfare, and public works. The group’s first-year goals include engaging the community, establishing multiple social media communication links and working to acquire business sponsors and apply for grants “to help get the word out.”

The council will also develop relationships with other community-oriented groups such as the Lions Club, homeowners associations and school-based clubs and organizations.

Supervisor Jeff Serdy, R-Apache Junction, asked how rural residents, who were the first to live in San Tan Valley, are going to keep their lifestyle. McKnight replied that they’ve talked about having a committee “strictly for the rural community,” and also involving those residents in each subcommittee.

Board Chairman Steve Miller R-Casa Grande, asked if the advisory council is nonprofit. McKnight replied that it has bylaws and is working to become a nonprofit to help with funding.

“I think it’s a great idea,” Miller said, noting the county needs a conduit to the San Tan Valley community, “but I do see a lot of work in front of us on both sides.”

Vice Chairman Mike Goodman, R-San Tan Valley, said that when he was first elected four years ago, the San Tan Valley Special Area Plan was being written. He noted the new advisory council is modeled on one that has served the Green Valley community in Pima County since the 1990s, “and it’s been very successful.”

Goodman said giving a voice to San Tan Valley’s diverse communities “is vitally important so I’m glad to hear that’s something you’re working on and you want to do.”

SAN TAN VALLEY — EPCOR USA has received a $250,000 state grant to build a pipeline to distribute treated wastewater to farms and reduce the de…

FLORENCE — With state transportation officials preparing to announce their preferred corridor for a future north-south freeway this summer, th…

FLORENCE — Pinal County officials have given their blessings to a large development and water transfer sale in and around Queen Creek.

SAN TAN VALLEY — There’s a lot happening these days at the San Tan Valley Veterans Center. The center hosts bingo, open to the public, at 1 p.…

FLORENCE — An 8.5-acre tract near Gantzel and Combs roads, overlooked by commercial developers for 20 years, will instead be a new housing sub…

Board grants residents' wish to be left out of San Tan Valley plan
By MARK COWLING Staff Writer
Updated Feb 11, 2021

FLORENCE — Residents west of San Tan Regional Park told the Pinal County Board of Supervisors they didn’t wish to be a part of San Tan Valley.…