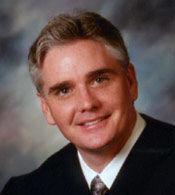 CASA GRANDE — The results of a blood test for a Pinal County Superior Court judge who was pulled over on New Year’s Eve revealed that the level of alcohol in his blood was well below the legal limit and drugs were not present in his system.

Aaron Nash, the communications director for the Administrative Office of the Courts in Arizona, released a copy of a supplement to the original police report with the blood test results for Pinal County Superior Court Judge Stephen McCarville. The tests showed that McCarville’s blood contained 0.020 gram of alcohol per 100 milliliters, which is equivalent to a blood alcohol content of 0.02%, well below the legal limit of 0.08%.

The tests also showed that McCarville did not have any drugs in his system.

According to the report, the case has been closed without prosecution.

McCarville was pulled over by a Casa Grande Police officer on New Year’s Eve after the officer allegedly saw McCarville’s vehicle drift toward the center median and make a left turn without using a turn signal.

McCarville reportedly told the officer that he had had maybe one or two drinks at a family member’s home before driving home and had taken a baby aspirin and received a COVID-19 vaccine shot earlier in the day.

At the station, the officer noted that McCarville had an extremely high pulse rate and wrote in his report that he suspected the judge might have an underlying medical condition.

McCarville followed up with his doctor at a later date and is being treated for high blood pressure, Nash said in January.

Chief Operating Officer of Meals on Wheels of Central Arizona Ana Medina, left, shows U.S. Rep. Tom O’Halleran how to package a meal at a new kitchen for the Meals on Wheels program in Pinal County Wednesday April 7, 2021 at Jimmie Kerr Boulevard and Interstate 10.

CASA GRANDE — U.S. Rep. Tom O’Halleran stopped by to package and deliver a few meals at a new kitchen for the Meals on Wheels program in Pinal County.

The kitchen is located in an old Wendy’s restaurant at the closed outlet mall on Jimmie Kerr Boulevard. The building and part of the parking lot surrounding it was donated by a California man to the Pinal-Gila Council for Senior Citizens Area Agency on Aging so the organization could build a central kitchen to cook and serve its Meals on Wheels and congregate meals at the city senior centers in Eloy, Florence and Coolidge.

The organization started work on renovating the building to meet its needs about a year and a half ago with the help of a $172,000 grant from the Arizona Department of Economic Security, said Victor Gomez, the vice president of development for PGCSC. 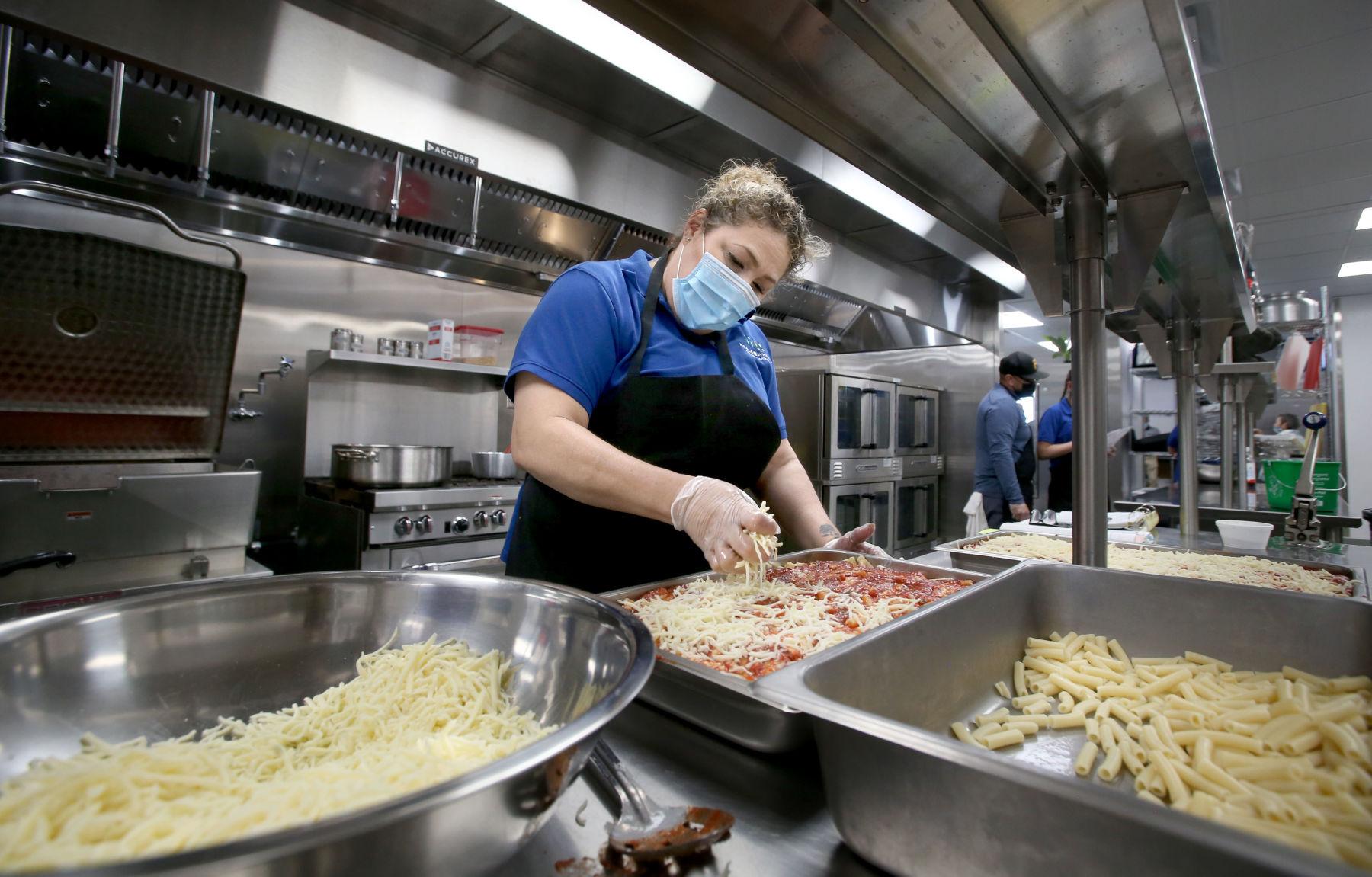 Lead cook Annette Raygoza prepares a dish at a new kitchen for the Meals on Wheels program in Pinal County Wednesday April 7, 2021 at Jimmie Kerr and Interstate 10.

The council had been using a contractor out of Tucson to help provide meals for both programs, said Ana Medina, the chief operating officer of Meals on Wheels of Central Arizona. The pandemic slowed the project down some, but the organization has been slowly opening the kitchen to use since June or July of last year and there are already plans to expand the kitchen to include more refrigerator and freezer space.

A grand opening for the new kitchen is planned for May, Gomez said.

“I’ve been to a lot of places like this, but I’ve never seen something at this scale,” O’Halleran said before presenting a special certificate of congressional recognition to the organization for the work it does serving meals to local seniors.

Gomez gave O’Halleran, Casa Grande Mayor Craig McFarland and Eloy Mayor Micah Powell a quick tour before all three tried their hand at sealing a couple of meal trays for next week’s meals. 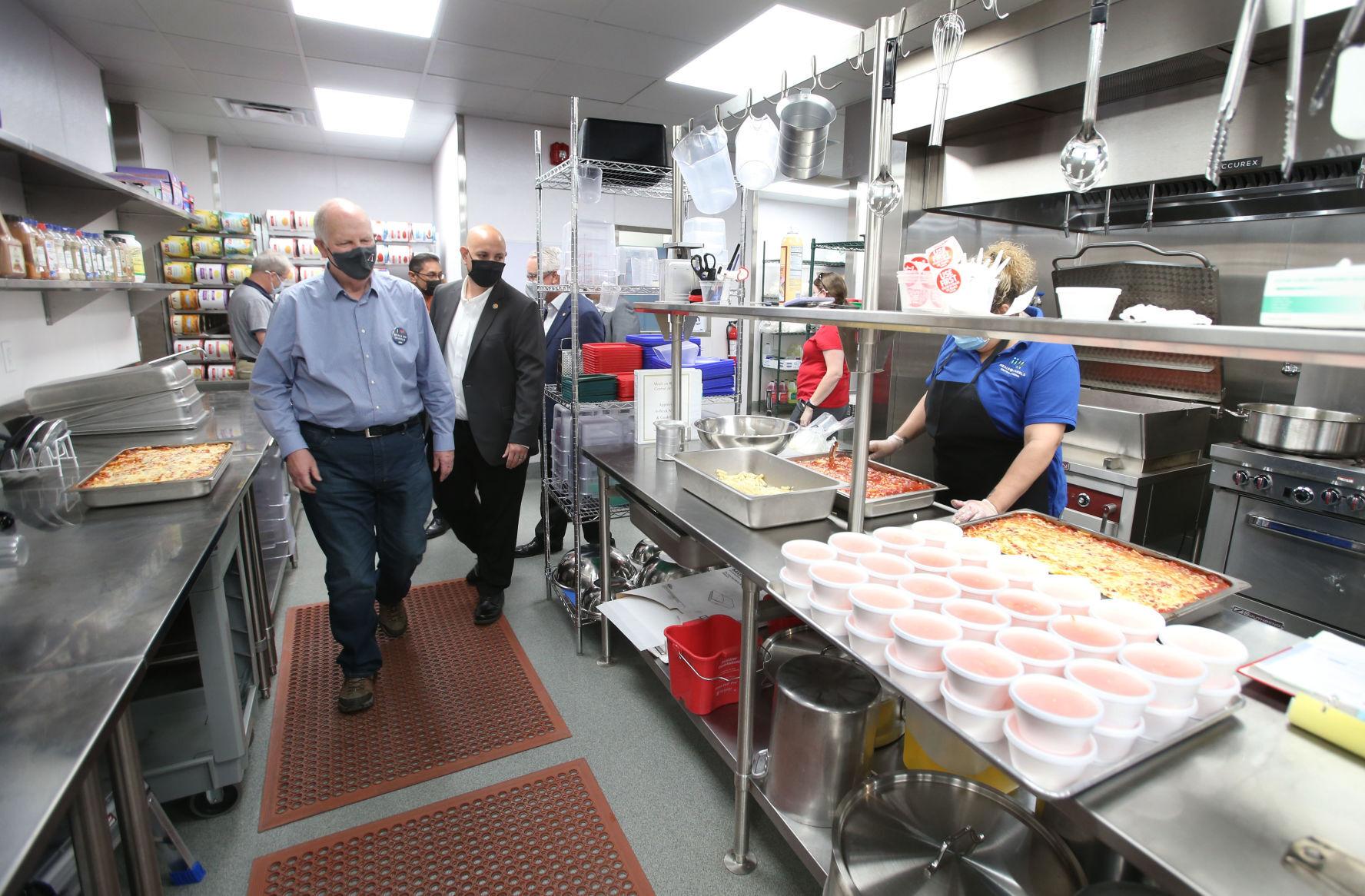 O’Halleran spoke briefly with PinalCentral before leaving to help deliver meals to local seniors with Meals on Wheels volunteers.

He said that while President Joe Biden’s $2 trillion infrastructure plan does not specifically earmark funds for the widening of Interstate 10 in Pinal County, he does believe that some of the money set aside for significant transportation projects may make its way to the I-10 widening project.

O’Halleran also said he expects the state, county and local governments will see some funding from the bill to help with water projects, such as replacing aging water lines within city limits.

Pinal County Sheriff Mark Lamb in 2017 explains how the department’s new helicopter radios will help deputies in a variety of functions, such as search-and-rescue operations.

PHOENIX — Over the past year and into 2021, police agencies in Arizona have received $6.8 million in military equipment through the Law Enforcement Support Office of the Department of Defense, documents show.

The Pinal County Sheriff’s Office leads the pack in the number of acquisitions from the program, with $6 out of every $10 sent to Arizona going to the agency. PCSO acquired $4.2 million worth of military equipment, including a helicopter, inflatable boat, 19 night vision scopes, prefabricated buildings, forklifts, ammunition and a sofa.

The peak year for military equipment coming to Arizona police agencies was 2015, the year the Department of Public Safety acquired three airplanes. The planes totaled $51 million; all other agencies combined received $947,000 in equipment.

Recently released Department of Defense data sheds a light on the equipment law enforcement agencies in the state sought to add to their inventories from the program in 2020 and in early 2021 which appears to be supplies to help with COVID-19 as well as military grade vehicles and robots.

Since 1998, Arizona law enforcement agencies have received $91.8 million in military equipment, a figure outmatched only by California, Florida, Tennessee and Texas.

Police departments receive the equipment at no cost except for shipping. President Barack Obama signed an executive order in 2015 banning the transfer of some of the equipment, such as high-caliber weapons and grenade launchers. President Donald Trump rolled back those restrictions in 2017.

Other agencies in Arizona have also received some high-ticket items from the program in the past 15 months.

The item is a bomb defusal robot that was likely used in the wars of Iraq and Afghanistan that are being phased out as the United States military moves to more sophisticated unmanned ground vehicle systems.

“These robots reinforce our preparedness to protect the airport and the traveling public, and support our primary mission to ensure aviation safety and security,” Tucson Airport Authority Police Chief Scott Bader said in a press release about their acquisition.

The Buckeye Police Department, which also acquired a UGV, obtained a number of other pieces of new equipment, including a new sedan, scooter, five ATVs, two forklifts, spotlights and searchlights, a truck and a mine resistant vehicle commonly referred to as an MRAP.

“The Buckeye Police Department and its citizens have benefitted (sic) greatly from the Law Enforcement Support Office 1033 Program,” Buckeye Police spokeswoman Donna Rossi said in a statement to the Arizona Mirror. “We have obtained lifesaving medical equipment including first aid kits and AED’s in the past.”

Buckeye police also acquired two “mule” ATVs that Rossi said will be used in the desert areas of the city.

“The mine resistant vehicle is assigned to our SWAT team for tactical operations, such as barricades, search warrants and responding to potential active shooter scenes,” Rossi added.

Many agencies also appeared to have stocked up on gauze, gloves and other medical supplies from the program during 2020, likely to help during the pandemic as law enforcement interacts with the public. Winter clothing, jackets and boots were also popular items with law enforcement this past year.