The 1894 fire that burned down most of the business district in Globe started in a “Chinese chop house” (restaurant) behind a saloon at this location. The building and two other shops to the south were rebuilt by a Mr. McNelly in 1898, according to Lee Ann Powers from the Bullion Plaza Cultural Center & Museum in Miami.

GLOBE — For the community of Globe, the Telegraph Fire brings up echoes of the distant past.

Molly Cornwell from the Globe Downtown Association and Lee Ann Powers from the Bullion Plaza Cultural Center & Museum in Miami pointed out that 127 years ago this week, most of Globe burned to the ground after a fire broke out in the business district.

According to a June 9, 1894, edition of the Arizona Silver Belt, Globe’s newspaper at the time, the fire broke out in the rear of Rolling & Rogers saloon in a “Chinese chop house” or restaurant around 2 a.m.

The 1894 fire that burned down most of the business district in Globe started in a "Chinese chop house" (restaurant) behind a saloon at this location. The building and two other shops to the south were rebuilt by a Mr. McNelly in 1898, according to Lee Ann Powers from the Bullion Plaza Cultural Center & Museum in Miami.

“Immediately after the first alarm a column of fire was seen to shoot up from the center of the business part of town, lighting up the heavens with a lurid glare and sharply outlining every building in silhouette,” the article states.

The fire spread with “marvelous rapidity” until a whole block was in flames. The residents tried to stop the fire at “the alley known as Push (S)treet” but the intense heat caught a building on the next block south on fire.

Residents pulled items and goods from store shelves and piled them “in a disordered mass in the street where they caught fire and increased the danger and confusion,” according to the paper.

The flames then spread to the northeast, burning down multiple buildings including “the handsome Klein store,” a bridge over Pinal Creek, a Masonic building, a news shop, another saloon and several other stores, warehouses, homes and outbuildings. One storehouse was torn down in an attempt to save a couple of homes, but the homes caught fire anyway. 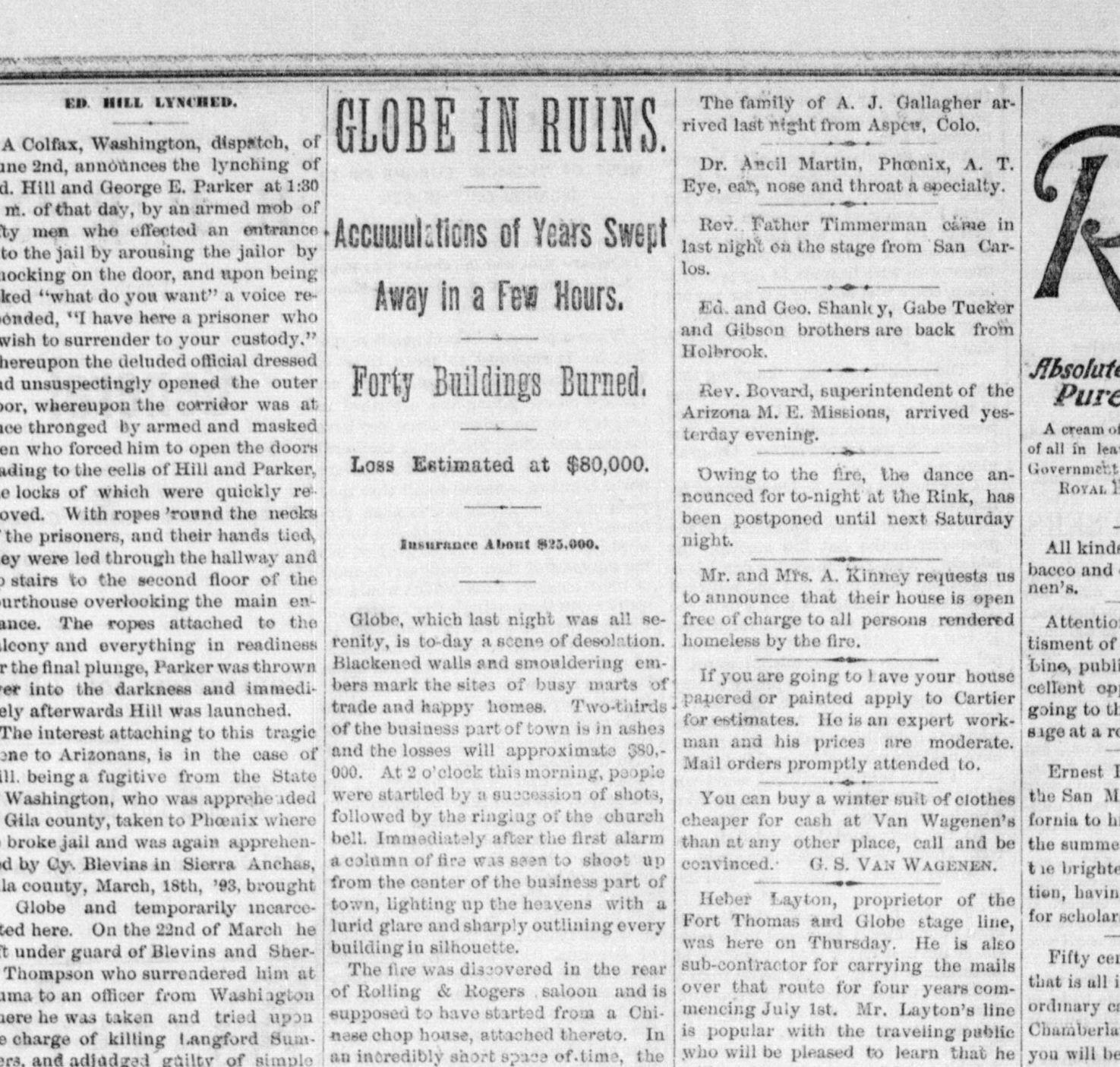 According to the paper, residents were surprised when Kellner’s store, which was supposed to be “fire proof,” caught fire. The store had to be abandoned to the flames because of its height and the intense heat of the fire.

The fire burned about two-thirds of the business section, about 40 buildings total, and caused $80,000 in damage.

GLOBE (AP) — Firefighters gained a toehold Wednesday on a massive wildfire in Arizona, one of several burning across the Southwest in states f…

PHOENIX (AP) — Firefighters in Arizona were fighting Tuesday to gain a foothold into a massive wildfire, one of two that has forced thousands …

ALBUQUERQUE, N.M. (AP) — Most residents in Maricopa and Pinal counties have been spared from the smoke being created by two massive central Ar…

CASA GRANDE — The City Council has approved a contract with Shums Coda Associates for building plan review and consulting associated with the construction of Phase 2 of the Lucid Motors plant.

“The specific task that Shums Coda will be providing under this contract is to assist the building department with a review of the various building plans that will be associated with Lucid Phase 2,” said Planning and Development Director Paul Tice.

According to the council’s June 7 meeting agenda, SCA was selected as the most qualified firm, based primarily on its experience as the building plan review consultants on Phase 1 of the Lucid plant as well as its involvement with the initial design process that is underway for Phase 2.

The new contract would allow Shums Coda to continue its work into fiscal year 2021-22.

During the meeting, the mayor and council authorized the city manager to execute a contract with Combs Construction Company for upgraded traffic signal equipment and intersection improvements.

The council approved Mayor Craig McFarland’s recommendation to appoint Celeste Garza to the Planning and Zoning Commission. The term will expire in November 2023.

The council approved the appointment of Mindi McWherter-Dawkins, Darlene Moberly and Michael Cruz to the Board of Adjustment.

During the meeting, the council adopted a resolution canvassing the results from the city’s special election held on May 18 for the city’s General Plan 2030, which was approved by voters.

“I could tell you that here at the city we received two phone calls of voters expressing concerns,” said City Clerk Gloria Leija. “Overall, that all-mail ballot went very well for the city of Casa Grande.”

“I’m really proud of the committee and the outreach and the inclusiveness with our staff and all the meetings that they had,” Councilwoman Lisa Navarro Fitzgibbons said. “There was a lot of time dedicated to this.”

The council adopted the FY2022 tentative budget totaling $281,496,256, excluding fund transfers. According to the presentation, the tentative budget will be posted to the city’s website June 15.

Monday’s meeting was the first where residents were able to participate in public comments since the pandemic put a halt to that agenda item.

CASA GRANDE — Phase 2 of Lucid Motors’ manufacturing plant has been given the green light by the Casa Grande Planning and Zoning Commission.

CASA GRANDE — Due to COVID-imposed delays, Lucid Motors is now tracking toward selling vehicles as early as it can in the second half of 2021 …

Mafi Pamaka of Coolidge was among girls from around the state to attend Camp Fury, a Girl Scout camp that introduces teen girls to careers in law enforcement and firefighting.

COOLIDGE -- Since she was a small girl, Mafi Pamaka, 17, has dreamed of a career in firefighting.

And after attending a recent Camp Fury Girl Scout event in Tucson, she said her dream seems closer than ever.

Pamaka hopes to become a wildland firefighter soon after she graduates from high school and Camp Fury gave her an up-close look at what being a firefighter entails with activities and classes led by women who work in or retired from the profession.

One activity included climbing 105 feet in the air on an aerial ladder.

“I scratched my knees up because I was wearing shorts,” she said. “But it was a great experience. I knew it would be hard to climb. I tried going up it too fast and I got out of breath pretty quickly but that makes me want to work harder.” 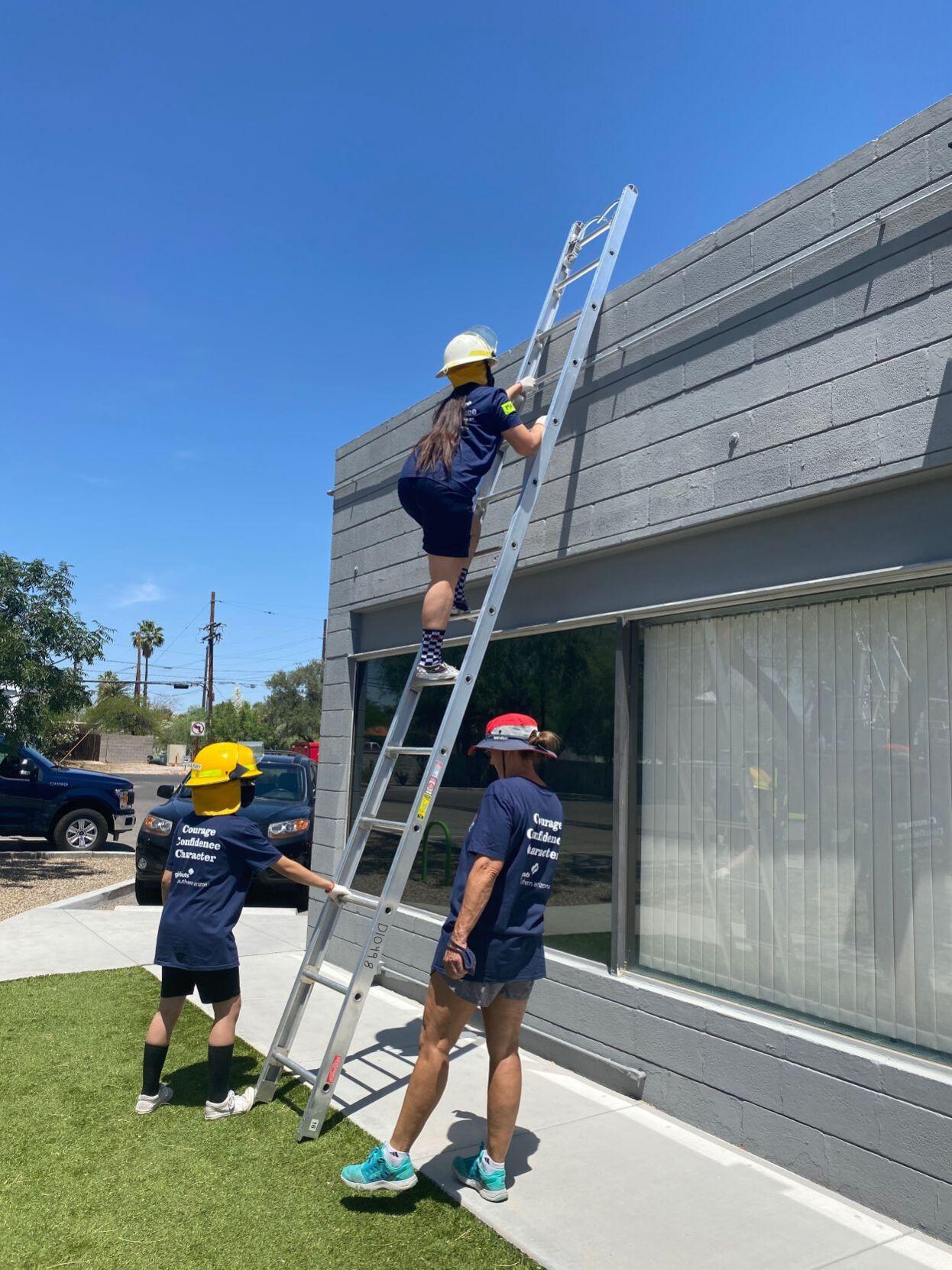 Mafi Pamaka attended Camp Fury, a Girl Scout camp where teen girls learn what it’s like to be a firefighter or to work in law enforcement.

Although females make up more than half of the U.S. population, fewer than 13% of law enforcement officers are women and only 6,200 women in the U.S. are full-time career firefighters, a press release from Girl Scouts of Southern Arizona said.

“Camp Fury provides such a powerful experience for girls,” said GSSoAZ CEO Kristen Hernandez. “They learn the true meaning of teamwork, courage, grit and dedication while also gaining new perspectives and opportunities to advance female leadership in fields that are traditionally male dominated. Many of our Camp Fury grads go on to discover careers in fire, law enforcement, health and safety.”

Pamaka, who has been a Girl Scout since kindergarten, was among girls from around the state attending this year’s camp, held the first week of June.

Pamaka is going into her senior year at Imagine Prep Coolidge. She is dual-enrolled in the Central Arizona Valley Institute of Technology fire science program.

After she graduates from high school, she plans to attend Arizona State University while beginning a career in wildland firefighting.

But she said her favorite activity was listening to stories told by the firefighters teaching the course.

“I really liked listening to the women who are working as firefighters. They gave us advice and warned us that to become a firefighter, you have to work for it,” she said. “I learned how much you can get done when you work as a team and how much thinking and planning goes into fighting a fire.” 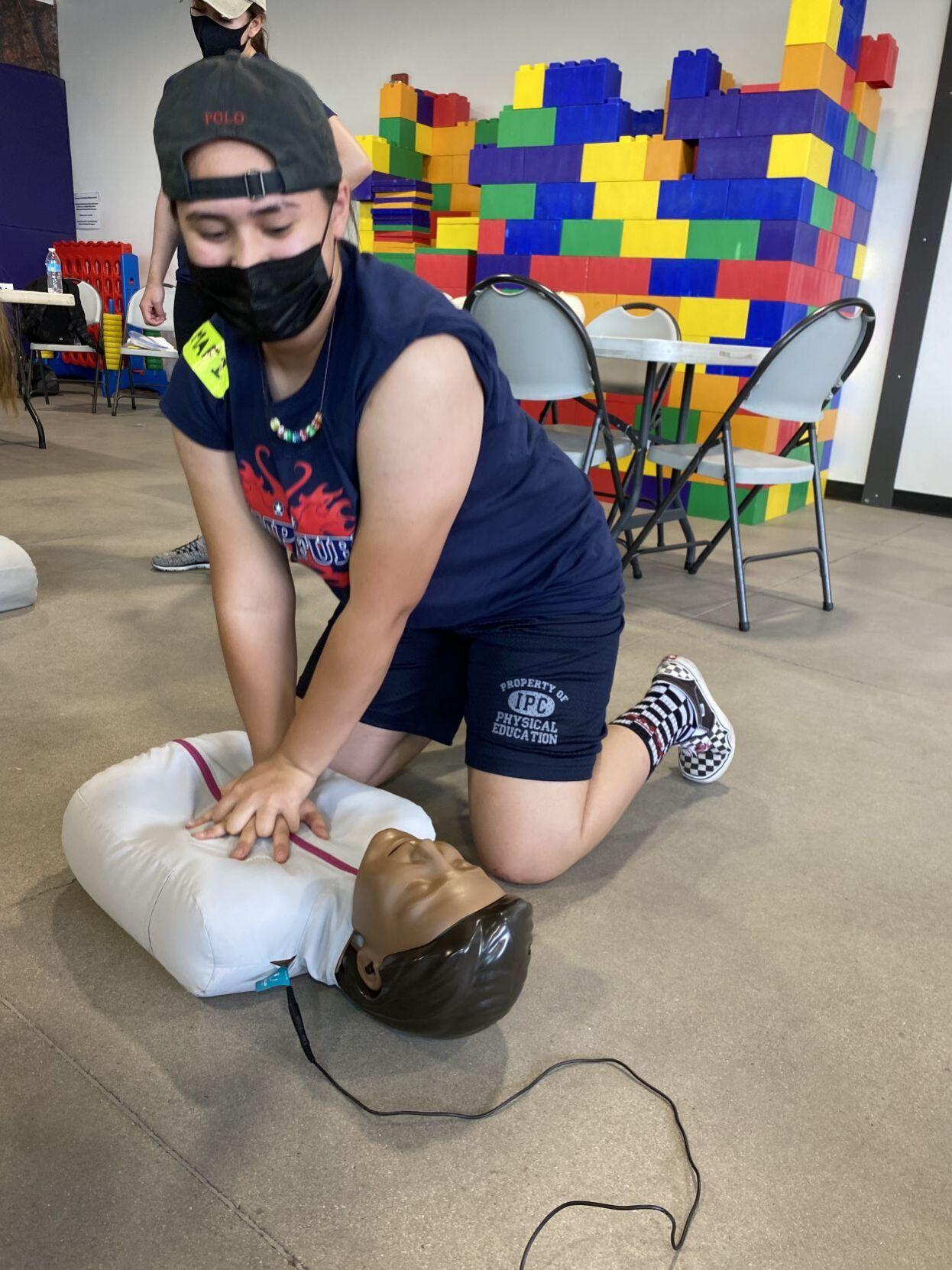 Mafi Pamaka of Coolidge practices CPR during Camp Fury, a Girl Scout camp that introduces teen girls to the professions of law enforcement and firefighting.

“Camp Fury focuses on encouraging young women and girls to consider public safety as a career option, and it is important that we continue our commitment to this effort,” Horvath said. “Camp Fury is a fun way to learn about these careers as the girls will be challenged each day with learning new skills in a team environment.”

The camp was one of the first of its kind created to introduce girls to careers in firefighting and public safety while encouraging leadership and physical fitness, according to the press release. The program has become a model for other Girl Scout councils across the country to replicate.

This year Camp Fury was a two-day event rather than its typical weeklong program, held at Angel’s Place for Girls at GSSoAZ’s Broadway campus.

Last year, amid COVID-19, the camp was canceled.