COOLIDGE — A Florence man was killed when a woman fleeing in a stolen car struck his motorcycle on Memorial Day, authorities said.

On Sunday, Ivanny Torres, 25, who identifies as a woman, allegedly stole a pickup truck in the Chandler area and later crashed it near State Routes 87 and 187, said Coolidge Police Cmdr. Mark Tercero. Torres then fled the scene of the accident. The Arizona Department of Public Safety took a report on the hit and run accident and started investigating Torres as a possible suspect.

Torres then came to Coolidge and around 3:44 p.m. stole a Nissan sedan from a family member, Tercero said.

At around 1 a.m. Monday, Coolidge Police received a call of a two-vehicle accident at Hanna Road and State Route 87 that was blocking the roadway. When officers arrived they found a gray passenger car, a badly damaged motorcycle and a CoreCivic employee performing chest compressions on the motorcyclist, Tercero said.

Officers determined that Torres ran a stop sign at the intersection striking Talon Nunez, 31, of Florence, a CoreCivic employee who was riding his motorcycle, Tercero said. Following the collision, Torres allegedly tried to steal a vehicle belonging to one of Nunez’s family members who also works at CoreCivic. The family member had stopped to help Nunez after recognizing the motorcycle. The woman was able to fend off Torres and secure her vehicle away from the scene.

Torres then allegedly tried to steal the vehicle of another CoreCivic employee who was driving to work by attempting to pull the driver out by her hair, he said. That employee was able to drive away from Torres.

Torres allegedly stepped on the brakes, causing the person who was following her to hit the back of the vehicle Torres was driving.

Torres then allegedly exited the vehicle, leaving it in drive and allowing it to roll into a field, Tercero said. Torres and the person who was following her then got into a fight. The person used pepper spray on Torres.

When a DPS trooper arrived on the scene and attempted to intervene in the fight, Torres allegedly spit pepper spray into the trooper’s face and bit him, Tercero said. During the scuffle, the trooper’s glasses were broken. Torres also allegedly bit an Eloy firefighter before being taken into custody.

Torres was transported to Banner Casa Grande Medical Center for treatment, where she allegedly made comments to medical staff that she had recently consumed fentanyl and methamphetamine.

After she was released from the hospital, Torres was booked into the Pinal County jail on suspicion of assault, manslaughter-reckless, theft of means of transportation and robbery.

A GoFundMe page has been set up to help Nunez’s family at https://gofund.me/471c000e. According to the GoFundMe page, Nunez had worked in corrections since 2018 and was promoted to sergeant in 2020.

Ginarro New receives a pin during his graduation from the police academy two years ago.

In this undated photo provided by the Phoenix Police Department is Officer Ginarro New. The Phoenix police officer died after being hit by a driver who ran a red light and also died, authorities said Tuesday, June 1, 2021. The crash happened Monday night after 27-year-old Officer New entered an intersection and his police SUV was hit by another car, Phoenix police said in a statement. (Phoenix Police Department via AP)

PHOENIX — Phoenix Police Officer Ginarro New, who tragically died in a vehicle collision Monday night, was given a procession Wednesday afternoon and honored in a video tribute compiled by the Phoenix Police Department.

The video shows New, 27, graduating the police academy two years ago and up until his fatal accident. Officers who worked with him said he was a dedicated professional whose loss will be felt by the staff.

“Any loss is a loss,” said Sgt. James Byrd, New’s recruit training officer, “but it’s so much more so when it was a person who is doing their job and who has given of themselves for others.”

Byrd said that watching New’s transformation into a passionate police officer was “amazing.”

New’s field training officer, Tom McKee, described him as a “people’s person” and a loving husband who was always good for a laugh.

“His confidence and charisma just seemed to come natural for him,” McKee said through tears. “In the mornings, after we’d talk shop, we would go into something fun and just now that’s gone. I’m going to miss him.”New’s stepmother, Carrie Singer New, posted on Facebook shortly after New’s death, thanking people for their support and reminiscing about raising New, including a talent show when he was a young boy. 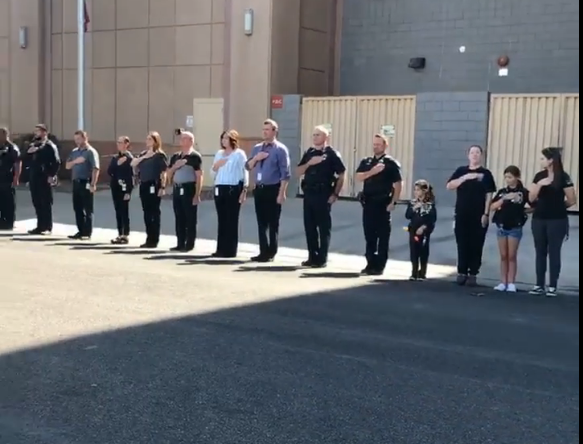 Phoenix Police officers with the help of other agencies escorted the body of Officer Ginarro New on Wednesday morning from the medical examiners office to the mortuary in preparation to place him in his final resting place.

“This is such a tragedy and a nightmare you just can’t wake up from,” Singer New said. “There will always be a special place in my heart for Ginarro and I will cherish every memory I made with him and the rest of my boys. Ginarro, I am SO proud of you and choosing to be the young man that you are and all the accomplishments you made in your life.”

Singer New said she had the opportunity to talk to him and give him a hug before he died.

New was a graduate of Coolidge High School from the Class of 2012 and had many friends and family still in the area who are mourning his loss.

“Ginarro was a kind, funny and focused student who I enjoyed working with during his high school years,” said Coolidge Rotary Club Vocational Chair Julie Leonard. “He was the type of young man who was nice to everyone. I remember him fondly and he definitely made this world a better place. It is heartbreaking to lose him and my prayers go out to his family and loved ones.”

Leonard said she remembered him being very involved in Junior ROTC, and he also participated in the GEAR UP activities, a federal grant program Leonard coordinated that year.

“He was always outgoing and caring for others,” said fellow CHS Class of 2012 graduate Zachary Morrow in a post to Facebook. “We lost a good soul. May God be with him and his family in their time of need.”

Coolidge resident Jessy Gonzales said that New, who dated her daughter in their junior and senior years of high school, would take Gonzales' daughters out for ice cream and that he considered them the sisters he never had. Gonzales said her girls were devastated to learn of New's passing.

On Wednesday evening, the Coolidge Water Tower was lit up in blue lights in honor of New. 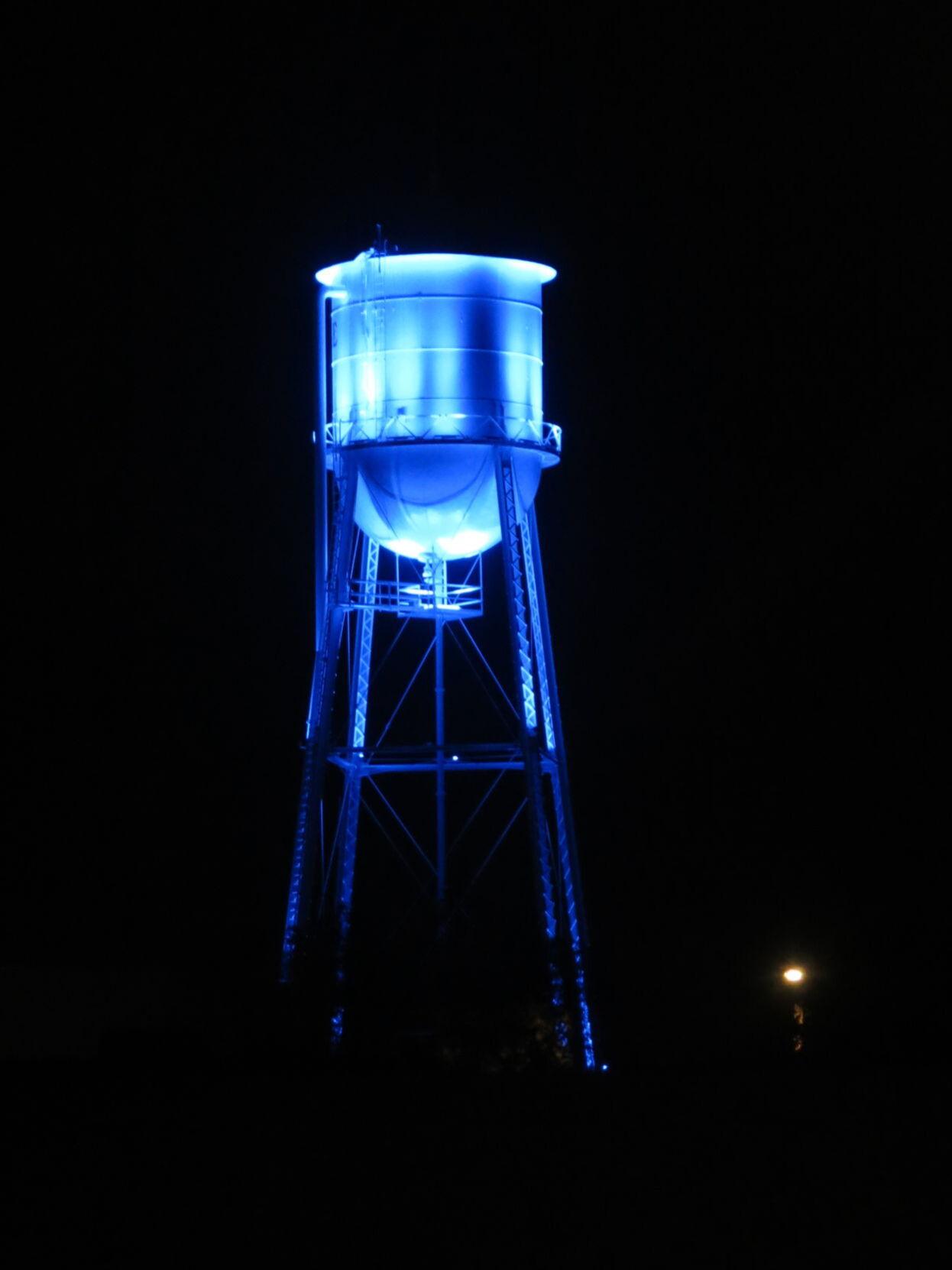 The accident occurred Monday evening when another vehicle ran a red light and sent the police SUV New was riding in through a brick wall.

Thursday from 10 a.m. to 10 p.m., there will be a fundraiser barbecue at the offices of the Phoenix Law Enforcement Association at 1102 W. Adams St. in Phoenix. Those interested in attending or making donations can contact the office at 602-246-7869.

Vietnam War veteran Jesse Mireles, president of American Patriot Construction, said on Memorial Day, it’s important to remember the families of those who died in war. On the screen behind him are photos and memories of Guadalupe Rendon, who died in Vietnam.

CASA GRANDE — When Ben Benavidez was a child in Casa Grande, he looked forward to receiving letters from his uncle Guadalupe Rendon, who was serving in the U.S. Navy in Vietnam.

“He wrote me letters telling me about the things he saw in Vietnam,” Benavidez said. “I felt elated every time a letter came in the mail because I knew if I was receiving a letter, he was still alive.”

In 1967, the letters stopped arriving.

Rendon, who had graduated from Casa Grande Union High School in 1965 and joined the Navy soon after, was killed when on patrol south of Hoi An in Quang Nam Province when booby-trapped artillery shells were detonated. He was 21 years old.

“In every letter he wrote to me, he would count down how much longer it would be until he would come home,” Benavidez said. “He had 90 days left to go in Vietnam then he would have been home.”

On Memorial Day, the stories and sacrifices made by Casa Grande’s military men and women were remembered in two special events, a morning cemetery held at Mountain View Cemetery and a small lunch at Eva’s Fine Mexican Food restaurant in the afternoon for the families.

Rendon’s family, who now live in the Phoenix area, traveled to Casa Grande for the event. Among his surviving family are his nephew, Benavidez, as well as a brother and a sister, Dora Rendon-Longoria Veach, 73, of Peoria.

Veach, who grew up in Casa Grande along with her brothers, said Rendon’s death made a big impact on the family.

She was in her first year of college when he died.

“My mom didn’t have a phone,” Veach said. “So after she was informed that Lupe died, she had to go to the neighbors’ house to use their phone to call family. We were all shocked. We always knew there was a possibility he could die in the war but you’re never fully prepared for something like that.”

She remembers her older brother as a happy, good-looking man who loved to dance and box. He also enjoyed helping people as a medic in the Navy.

“He was a very compassionate person,” Veach said. “I know he suffered when he tended to the young men but he found strength in spirituality. He wrote letters to the parish priest (in Casa Grande) asking for spiritual strength.”

Memorial Day events bring healing to the families left behind after a loved one dies in combat, she said.

“Survivors sometimes suffer alone,” Veach said. “But when we come to Memorial Day events, we know we’re not alone. There’s a camaraderie here. And the spirits of our loved ones live on when we tell their stories.”

She put together short biographies on each using information gathered from military records and other sources to give people an idea of who they were. She also tracked down their surviving family members.

The task was emotional, she said, but important because as the years pass, communities sometimes forget the toll a wartime loss can take on families.

Vandenberg was successful in tracking down family members from all five of Casa Grande’s Korean and Vietnam war era casualties except one, William Cates.

A special framed biography and photo was presented to families on Memorial Day. But with no one found from Cates’ family, his framed biography was given to Stanfield Elementary School, where he had once been a student. It will hang in the school’s hall of fame.

Monday’s Memorial Day lunch for the families was sponsored by American Patriot Construction, which is headed by Jesse Mireles and his partner, Fernando Cornejo, a Casa Grande architect and owner of Eva’s restaurant.

Mireles, who also served in Vietnam, said the company was developed with the motto of “veterans rebuilding America.”

“Today is a day for families and to honor their loved ones who didn’t come home from war,” Mireles said.

Mireles said the memories of his experience as a combat infantry platoon sergeant in Vietnam are still fresh in his mind. He witnessed several deaths and said he feels blessed to still be alive.

“We gathered today out of respect for families who lost a loved one,” he said. “They bear the burden of that loss for life.”

CASA GRANDE — A crowd of hundreds gathered at Mountain View Cemetery Monday morning to remember those who died serving in the U.S. military.