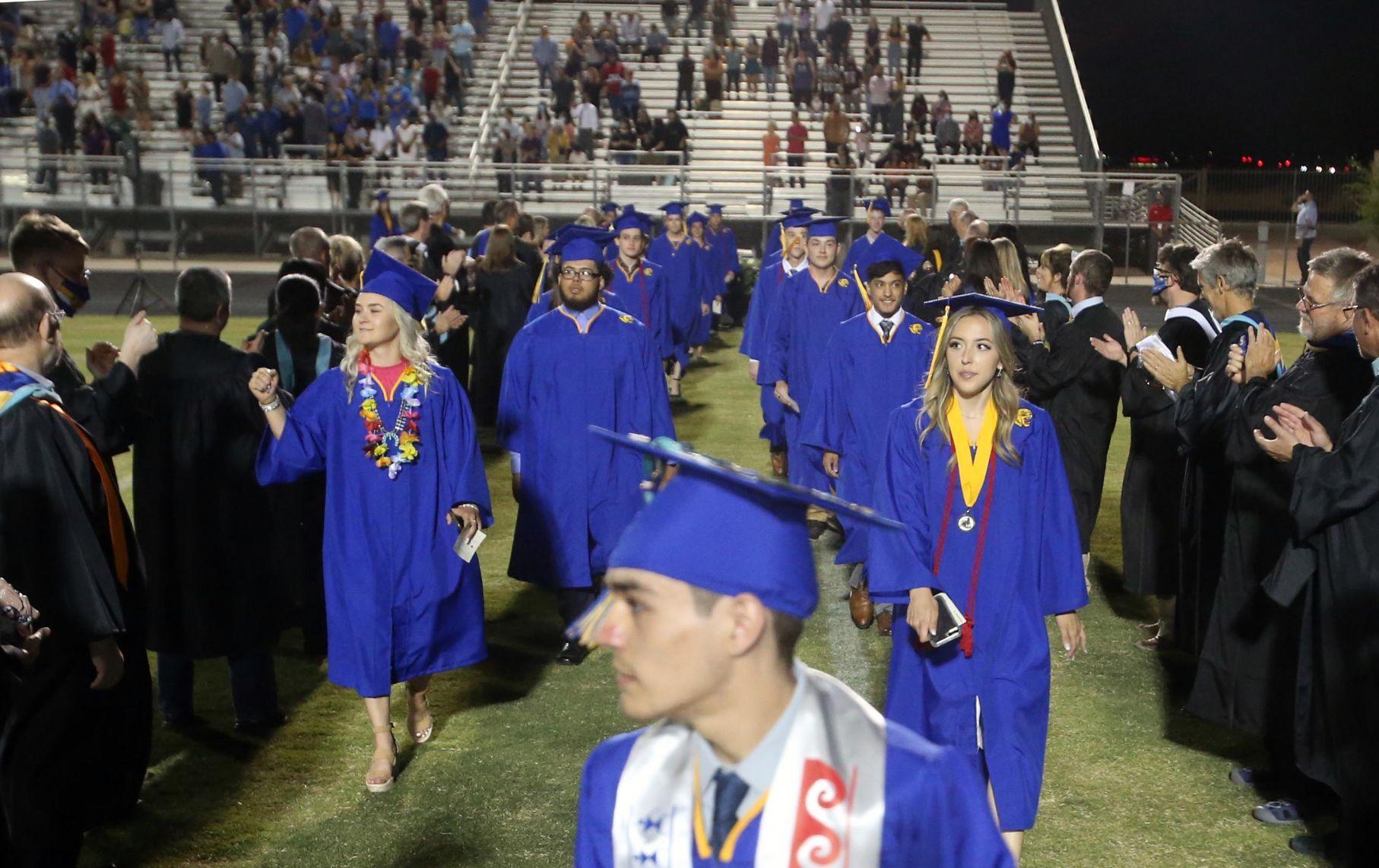 Seniors march in during the processional of Casa Grande Union High School’s 102nd Commencement on Tuesday, May 18, 2021, at Al Van Hazel Stadium. There were 384 seniors listed in the graduating class. Vista Grande’s ceremony is scheduled for 8 p.m. tonight.

This is where Eloy police officers place their body cameras at the end of each shift.

Police Chief Mark McCrory came before the City Council on Monday evening for a presentation on cameras during a study session.

According to the presentation, there now is no body-worn camera program for the department. However, there are dash cameras that require manual downloading and sharing.

The CGPD’s proposal includes 95 body-worn cameras, 97 licenses for access, use of Evidence.com for all members and unlimited storage for body camera footage and Axon Capture footage.

“I think across the country departments are finding out that if you’re going to go in, go all in,” McCrory said.

According to the presentation, these proposals should improve transparency, increase public trust, decrease litigation and reduce the number of false complaints.

Some of the features in the latest version of the Axon Body 3 are improved low-light performance, clear frame playback and a full-shift battery.

According to the presentation, all 95 body cameras and 13 docking stations will be replaced at no additional cost after 30 and 60 months of the agreement.

“I think officers now, as time goes on, and they see the body cameras, they actually think that’s really something to help them out, against false claims and things like that,” McCrory said. “You can actually show what happened, keep in mind that the body camera doesn’t catch everything.”

“I’m just so happy to see the different departments coming together,” said Councilwoman Lisa Navarro Fitzgibbons. “This is going to be great for not only our community but our officers.”

According to the presentation, the annual projected cost of the program would be nearly $300,000.

“It does look like a lot, but I think that in the best interest of our community and the officers, we need this,” Councilwoman Donna McBride said.

“Once the mayor and council considers and potentially adopts the tentative budget on June 7, we will essentially begin to ramp up the necessary procurement components that will have to come back to the mayor and council, that you’ll likely see in July or August,” City Manager Larry Rains said.

Related
Casa Grande Police researching the use of drones
By SUZANNE ADAMS-OCKRASSA, Staff Writer
Updated May 20, 2021

FLORENCE — Pinal County is on track to have a new annual budget that fulfills all department requests for new spending and personnel while trimming the primary property tax rate by six cents.

The Board of Supervisors informally gave that direction to the county’s budget director Wednesday.

Even if the county had a “flat levy” collecting the same amount of tax as in the current budget year, resulting in a tax cut of eight cents, it would still have an ending fund balance of $42 million, or a reserve of 20%. The county has a strategic goal of maintaining General Fund reserves equal to 15% of spending.

“I wouldn’t suggest we drop eight cents, but even if we dropped six cents — that’s even better than our four, and we still come up with a good pile of money,” Supervisor Jeff McClure, R-Eagle Crest Ranch, said in discussion with his fellow board members. The board has reduced the primary property tax rate by four cents a year in recent years. “That’s been a great direction,” McClure said, “… and we’re still doing well, and we can still approve the departments’ increases.”

The current primary property tax rate is $3.75 per $100 of net assessed value. If the board approves the new annual budget as planned in a few weeks, the rate will drop to $3.69.

Board Vice Chairman Mike Goodman, R-San Tan Valley, said he thinks the county can afford to be more aggressive in cutting taxes. “The numbers are showing that right now … and we’re delivering everywhere we need to, we need to increase a lot of areas.”

Board Chairman Steve Miller, R-Casa Grande, said he also liked the idea of cutting six cents. He said he could remember when the board struggled for a budget with fund balances equal to 12% of spending. “This is a real comfort zone to me.”

But Supervisor Kevin Cavanaugh, R-Coolidge, asked about cutting taxes as the federal government fuels higher inflation. “Now I’m concerned with the government printing money until they run out of paper.”

Pinal County Budget Director Angie Woods replied, “The way we put together our forecast, we are pretty conservative when it comes to the revenues. And on the expenditure side, we’re taking into consideration some of the inflationary changes. … I’ve already built in some of what you’re talking about.”

She said it also helps that the county has healthy reserves. “The more we have in reserve, the more agile we are, able to react to the changing economy. … There’s less risk of a changing environment, we have more time to make decisions.”

Miller said cutting the tax rate a few cents doesn’t sound like much, until you’re a company investing $1 million in a property for economic development. “It actually turns out to be real money at some point. And those companies look at that number.”

Woods told the board that county population has grown 13% in the last four years, and the unincorporated area is growing as fast as the entire county. But the county’s full-time positions are only up 10%.

Increased operational expenses in the new budget include fleet maintenance and replacement, such as replacing high-mileage sheriff’s vehicles that weren’t replaced on schedule because of previous budget cuts, Woods said. Other sheriff’s expenses include aviation repair and maintenance and law enforcement equipment.

PHOENIX -- Top aides to Gov. Doug Ducey are defending the $1.5 billion cut in tax collections and bailout of the most wealthy as "modest and r…

CASA GRANDE — Bobby Johnson, also known as DJ Mellow B, understands what it’s like to be at a gathering where he doesn’t know anybody.

As a longtime wedding DJ, he said he’s become accustomed to entering a room and getting to know the crowd.

“As a wedding DJ, I often don’t know anybody in the room,” he said. “At a wedding, the DJ is the only stranger there.”

His experience connecting with audiences as a wedding DJ led him to create the Mellow B Entertainment comedy show, which will have its Casa Grande debut Saturday at the Paramount Theater.

The show features the comedic talents of Arizona comedians Ray Love, Jas Clay, Kingsley Amukamara and Wolf Brown, who will each take turns entertaining the audience.

Mellow B is the host and DJ of the event. 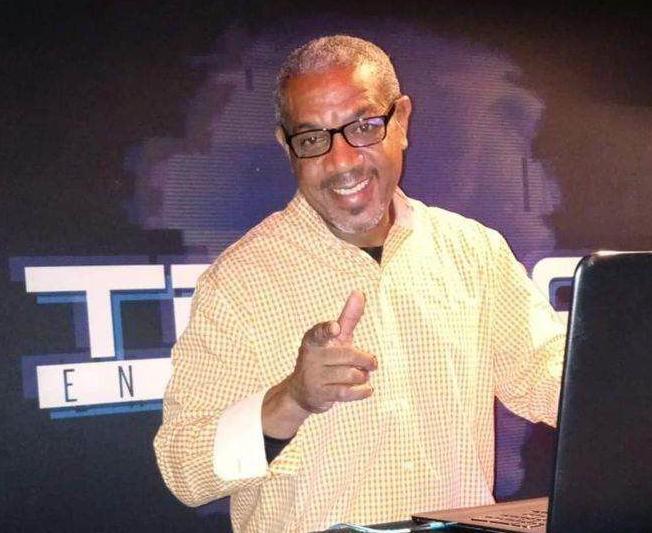 Each of the four comedians, he said, brings their own unique style to the show.

Johnson hopes to bring the comedy show to Casa Grande once a month, rotating a diverse lineup of comedians and entertainers.

While some comedians in later shows might have edgier routines, for the first Casa Grande show, the performances will be suitable for all audiences.

“The Casa Grande show will have a softer lineup while we feel out the community,” he said.

Audiences should come to the show ready to laugh and ready for surprises, he said.

“We also plan to have a performance by a surprise vocalist,” he said.

While the show is new to Casa Grande, Mellow B Entertainment comedy shows are often performed in Phoenix and Tempe.

“As a wedding DJ, I spent a lot of time observing the working parts of a comedy show,” he said. “Although I’m the host of this show, I allow the comedians to do their jobs.”

Johnson became a DJ when he was 14 and established his company, Mellow B Entertainment, in the 1980s.

“I have continued to mold my craft while including comedy shows as well,” he said.

Paramount Theater Manager Rickey Robinson said the new show will be a night of jokes and laughter.

“The comedy show came about from the people of Casa Grande asking me about bringing stand-up comedians to the theater,” he said.

The theater has focused on bringing a variety of shows to Casa Grande audiences to appeal to diverse audiences.

“Many patrons mention that they love coming to the theater to see the stage plays, murder mystery dinners, magic shows and tribute concerts. Casa Grande wanted me to add a stand-up comedy show,” Robinson said.

He said he will also be on the search for local amateurs and professionals for future events.

The Mellow B comedy show begins at 8 p.m. Saturday at the Paramount Theater, 420 N. Florence St.

Tickets are $25 for general admission, $35 for VIP seating or $45 for a private balcony table.

Tickets may be purchased online at www.triplerrrproduction.com.

An after party begins at 10 p.m. following the show. Doors open at 7 p.m. Food and beverages will be available.

A second show with a different lineup is planned for June 26 at the Paramount Theater.