PHOENIX — Some Arizona resorts could find themselves facing orders to shut down part of their water parks.

State Health Director Cara Christ said Monday she is sending inspectors to these resorts to find out exactly how they are operating their water features. And Christ told Capitol Media Services that those that are operating in an unsafe fashion will face orders to close.

Part of the issue, she said, is that several resorts are advertising to get day visitors to their facilities to generate additional cash. That includes not just the pools but also the water slides, hot tubs and “lazy river’’ floats.

But Christ also said that even those facilities that limit attendance to guests could wind up in trouble — and with an order to limit activities — if they are operating in ways that allow people to gather together in a way that could spread the virus.

The key, she said, is avoiding having large groups of people congregating.

“So if they’re limiting the activities and it’s limited to hotel guests and they’re not drawing large crowds like people waiting, that will be taken under consideration,’’ Christ explained

“But if they’re bringing in the public and everything’s open and they’re operating as a water park, that’s going to be a much different scenario,’’ she continued. “And if you’re doing both of those, that’s completely off the table.’’

Christ’s comments come as her boss, Gov. Doug Ducey, on Monday asked a federal judge to throw out a lawsuit filed against him by the owners of Mesa Golfland Sunsplash which has been forced to remain closed. Its attorney, Joel Sannes, says there are resorts in Arizona which appear to be operating nearly identical facilities, not only for their own guests but even for day visitors willing to pay an admission fee.

Legally speaking, Sannes charges that there is no “rational basis’’ for the disparate treatment. So he wants U.S. District Court Judge John Tuchi to order the governor to give the Mesa facility — and any other freestanding water parks — the same ability to operate.

Sannes may have a point.

Christ said when she and Ducey first crafted the order of what was allowed and what was not, the assumption was that resorts would limit attendance to guests. In that way, Christ said, there would be a list that health officials could use for contact tracing should someone come down with the coronavirus.

But all that was before Capitol Media Services provided her agency with an extensive list of resorts in Arizona that allow outsiders to pay a fee to use the facilities for a day. That got her agency’s attention.

“What we’re doing is we are sending our licensing surveyors out to do an on-site inspection of several of the facilities we have heard about to identify what they’re doing and whether they are operating as a water park,’’ Christ said.

So where is the line?

“If it’s a pool with a slide, that’s not a water park,’’ she said. For example, Christ said, the governor’s executive order permits city-run pools to operate.

Pools at hotels also can remain open if there are prohibitions against groups larger than 10 or more from congregating together in or near the water. And even pools at apartment complexes can be open if there are signs reminding people that they should not gather in groups of more than 10.

“Operating multiple attraction-type is also a different game than just operating a pool with a slide,’’ Christ said.

What her investigators find after visiting the resorts to see what is and is not open could prove material to whether the governor wins the lawsuit.

In his Monday filings, Ducey attorney Brett Johnson told Tuchi that the governor’s orders “do not permit hotel, resort, or municipal-owned water parks to operate.’’

Even if they are open, Johnson said, it’s legally irrelevant.

He said Golfland in essence is arguing that Ducey cannot enforce his executive order because other businesses may be operating illegally.

But Johnson said Golfland has submitted a request to reopen. And he argues that the facility can’t go to court until there’s a decision on that and it has exhausted its administrative remedies.

And the governor’s attorney said there are other reasons for Tuchi to send Golfland packing.

Tuchi has scheduled a hearing on the issue for the end of the week.

PHOENIX — The owners of a Mesa water park are suing to be allowed to reopen, claiming the policy of Gov. Doug Ducey keeps it shuttered is disc…

CASA GRANDE — Casa Grande Union High School teachers and staff gathered Friday evening to remember a colleague who, in the short time he worked at the school, made a difference in their lives.

Kevin Voit, a new assistant principal with the school, had only been on the job for about six weeks when he died unexpectedly Aug. 17 at the age of 35. 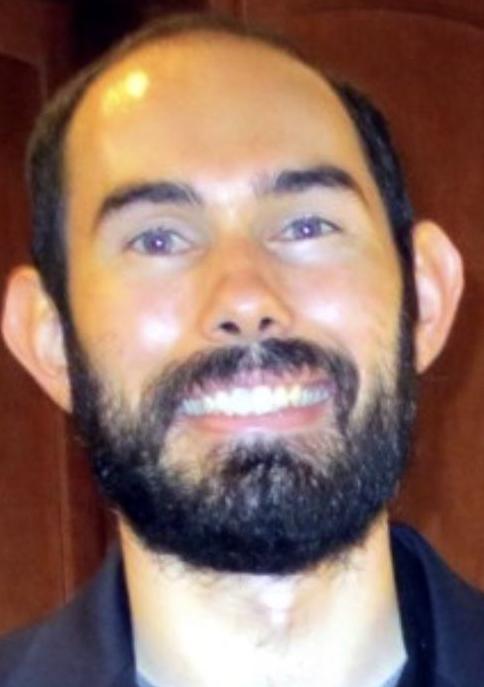 “He left too soon,” said Travis Brady, an area pastor who works at the school in a non-religious, counseling capacity.

“He was a very friendly guy. He went out of his way to make people feel welcome. I enjoyed working with him,” Brady said. “He had met a lot of the staff and teachers and some of the kids.”

Voit started at the school in July. He was found in his office in medical distress in the afternoon of the first day of school with distance learning. He was rushed to the hospital and later died. A cause of death has not been released.

Before accepting the job with CGUHS, he worked as an educator focused on teaching teens on Native American reservations and at-risk students in the Phoenix area, including Sacaton. He also served as a coach and social studies teacher.

His work at CGUHS involved rewriting and rethinking the school’s approach to discipline.

“He was my boss and a great guy,” Brady said.

Voit was working to bring a restorative justice approach to discipline at the school, Brady said.

“His compassion shone through in his work. Wherever he served, he became deeply invested in improving the communities he touched,” his obituary on the Dignity Memorial website said. “More than anything, Kevin believed in our common goodness and humanity.”

He had a German shepherd named Baloo. A photo on display at the vigil showed Voit apparently hiking on a snowy mountain range with Baloo by his side. 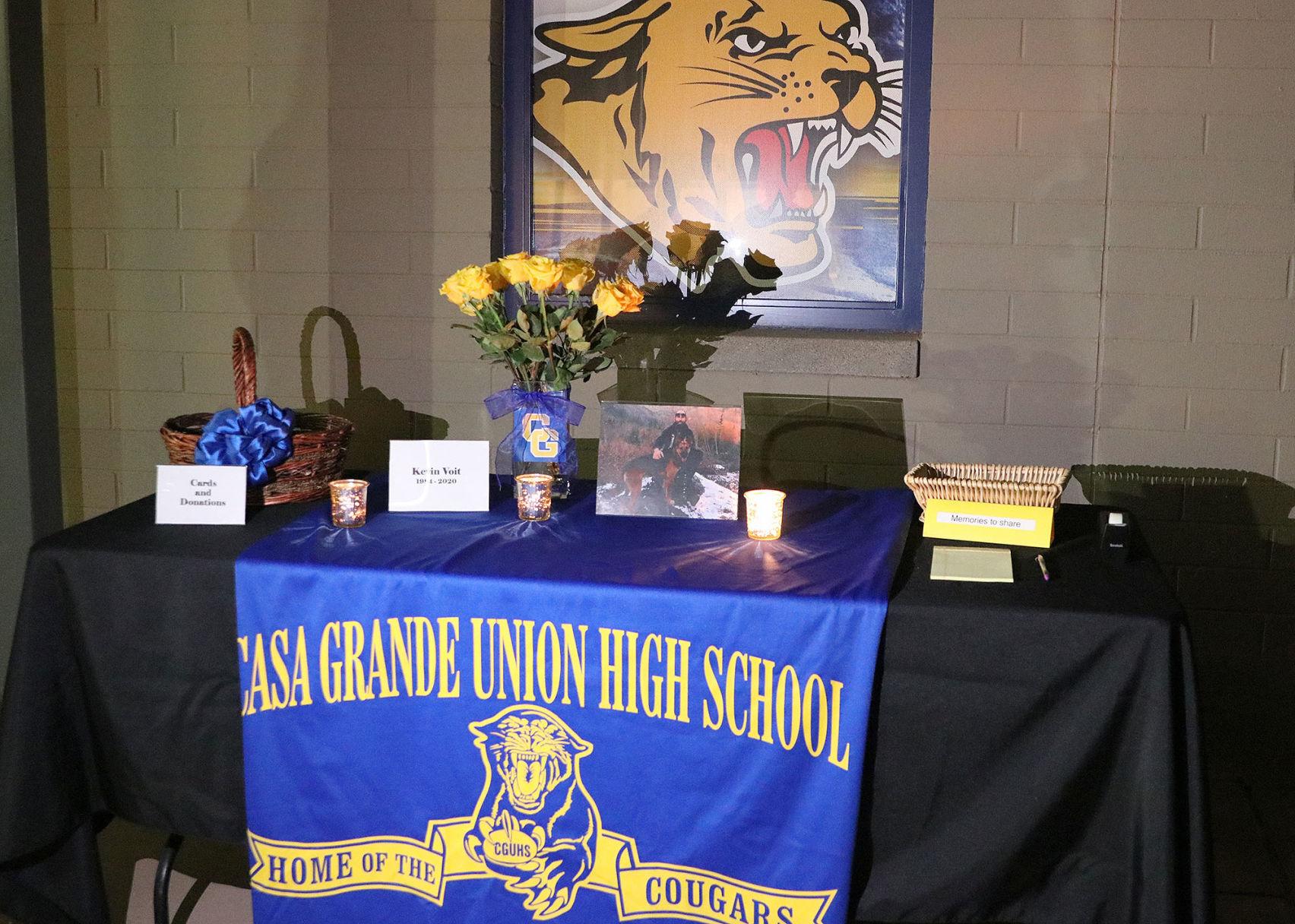 The vigil was a time to remember Voit and the impact he made on students, faculty and teachers in the short time he was at CGUHS, Brady said.

He encouraged people to mingle and talk about Voit and think of him fondly.

“I hope we all remember all the times he made us laugh and all the great works he did while he was here with us at Casa Grande Union High School,” Brady said.

CASA GRANDE — Bethany Cardenas has watched with a bit of anxiety as her 13-year-old son Blaze, who has autism, attempts to adjust to nontraditional, online learning in the age of COVID-19.

According to Cardenas, the only service being provided to her son in the midst of this pandemic is a half-hour session with seven other students with special needs. Cardenas is worried because her son needs the social aspect of class and suffers from short-term memory loss.

“I feel like it’s 100 times worse since the start of coronavirus. My son gets blamed when he doesn’t remember a password,” Cardenas said. “It’s a tortuous thing to watch your kid cry and hate himself.”

Cardenas has two other children and has found it difficult to assist all of them simultaneously in online learning.

“I feel utterly alone, and I know I can’t be the only one,” Cardenas said. Blaze attends Casa Grande Middle School, which is part of the Casa Grande Elementary School District.

Students, teachers and parents across Casa Grande and the nation are adjusting to online learning.

Cruz encourages parents who are experiencing roadblocks or concerns to reach out to their case managers for ways to support their schedules across virtual platforms.

Throughout the week, many parents turned to Casa Grande social media to share their experiences and seek advice.

Barbara Blain shared a photo of her children’s workspace.

“The first couple of days were difficult to figure out how to get online but the teachers at the Casa Grande (Elementary) School District have been super,” Blain said.

According to CGESD, the first week of online school was successful.

“Teachers are building strong relationships with students and delivering quality online instruction. Students have been able to interact with their friends and classmates online through virtual group discussions and break-out sessions,” Cruz said.

According to Cruz, every student and family who needed a device received it.

Nikki Watts is a mother of three. She has two children attending Casa Grande Union High School and a sixth grader at Villago Middle School.

“Both schools were extremely helpful with fixing the issues and were never rude. By Wednesday, we were moving along in a groove,” Watts said.

No date has been established for a return to in-person learning in Casa Grande. The Casa Grande Elementary School District announced in July that it would not return in person until at least October. If benchmarks set by the state are met, the high school district plans to allow students to return to school in a hybrid-learning setting sooner.

CASA GRANDE — The Casa Grande Elementary School District was issued a 90-day warning on Friday to correct some financial bookkeeping after an audit.

The school district was audited under the Uniform System of Financial Records, or the USFR, which is the accounting and financial reporting manual for Arizona school districts.

“As a result of our review, we have determined that the District has not complied with the USFR. Our determination is based on the most significant deficiencies cited in the District’s audit reports and USFR Compliance Questionnaire,” the notice said.

A CGESD spokesman said the issues raised by the audit are being addressed.

“This case is currently being rectified with state auditor general revolving around items they deemed deficient in our accounting/reporting practices a few years back,” Mike Cruz said in an email.

According to the notice that was received on Aug. 14, the district has until Nov. 12 to make corrective actions.

“Our finance and operations team have been working closely with our auditors and the state to ensure the items at hand are met and recommendations are implemented,” Cruz said.