CASA GRANDE — The Pinal County Attorney’s Office will not be filing criminal charges against three Casa Grande Police officers who were involved in the October 2020 shooting death of an Arizona City man, and an investigation found the use of deadly force was justified.

On the evening of Oct. 22, 2020, Francisco Danny Flores, 30, was shot by three Casa Grande officers after he failed to pull over for a traffic stop, led officers on a 10-minute slow-speed chase around town and then pulled what turned out to be a pellet gun on officers when he did stop near Wood Street and Melrose Drive. Casa Grande Police Officers Richard Rush, Andrew Egan and Sgt. John Tena all fired their weapons at Flores, killing him.

The March 2021 letter detailing the Pinal County Attorney’s Office decision was attached to a nearly 500-page Arizona Department of Public Safety report investigating the shooting at the request of the Casa Grande Police Department, which was released to PinalCentral last week. PinalCentral has requested a comment from the Police Department.

The DPS report found that the three officers were justified in using deadly force.

According to the report, a Casa Grande Police officer attempted to pull over Flores’ vehicle around 9:18 p.m. on Oct. 22, 2020, near Third Avenue and Florence Street for an expired license plate tag. Flores refused to stop for the officer, driving at speeds between 20 and 40 mph in circles through mostly residential neighborhoods near Casa Grande City Hall and into the west side of the city. At one point, the pursuit briefly reached speeds of about 55 mph on Pinal Avenue.

Several officers involved reported that they attempted to get ahead of the pursuit in an effort to lay down spike strips that would deflate Flores’ tires, but in nearly every case, the pursuit turned in a different direction.

Several officers also told DPS investigators that Flores didn’t appear to want to hurt anyone while fleeing from police. They said that speeds in the pursuit were slow, about 30 to 40 mph, and that several times Flores slowed and used a turn signal before rolling through stop signs.

One officer told investigators that it didn’t seem like Flores wasn’t out of control, like some pursuit suspects. He just didn’t want to stop for officers.

Flores continued to drive in circles, making random turns before eventually pulling to a stop at 9:28 p.m. on Wood Street near its intersection with Melrose Drive.

Flores then got out of his car and pointed what officers said looked like a black handgun at Rush, who was one of two Casa Grande officers in the vehicle that was directly behind Flores’ vehicle when he pulled over. The other officer in Rush’s vehicle was Egan. Rush, Egan and Tena, who arrived at the scene at nearly the same time, opened fire on Flores. A fourth officer who also arrived at the scene seconds before the shooting said he heard one of the other officers announce “He’s got a gun!” but because of where he was standing, he did not have a clear shot at Flores and did not fire his weapon.

All three officers, Rush, Egan and Tena, told investigators they did not believe they had time to grab their stun guns. They told investigators that it took seconds for Flores to exit the vehicle and point the pellet gun at Rush. They stated they felt their lives and the lives of the other officers were in immediate danger.

After Flores fell to the ground, he still appeared to be pointing his gun at an officer and officers fired again until the gun fell from his hand. At least a couple of officers called for medical aid and reported shots fired before officers approached Flores, kicked the gun away from him, handcuffed him and started first aid. Officers also found a knife on Flores. Emergency medical personnel from Casa Grande Fire Department and American Medical Response arrived at the scene a couple of minutes later, according to call logs for the incident. Flores was declared dead about 20 minutes later by a Banner Casa Grande Medical Center doctor.

The gun later turned out to be a pellet gun that did not have orange safety markings at the end of the barrel, which are used to alert others that the gun is not a lethal weapon, according to the report. In their interviews with DPS investigators, several law enforcement officers who were at the scene reported seeing the gun and described it as a black semiautomatic handgun.

A photograph of the pellet gun at the scene was included in the report next to a photo of a Ruger handgun. The two guns look very similar.

The Pinal County medical examiner noted in his report that he found 13 wounds, some of which were caused by bullet fragments, and four bullets in Flores’ body. An additional bullet was found on a sheet next to Flores’ body. He also found evidence of methamphetamine in Flores’ system.

Investigators also spoke with several witnesses who lived near the intersection where the shooting took place. One witness was a woman who told investigators that she saw the shooting from her window and that Flores exited his car, put his hands in the air and did not have a gun in his hands when he was shot by police. She told investigators that officers didn’t call out any orders for Flores to freeze or drop a gun. She also claimed that a K-9 officer that arrived at the scene seconds after the shooting took place let his dog loose on Flores.

A man who lived in the same house said he heard the gunfire but did not see the shooting because he was inside his home. He told investigators that he did not hear officers give Flores commands to stop or drop his weapon.

All three officers who fired at Flores described seeing a gun in his hand pointed at one of the officers. A couple of officers who arrived seconds after the shooting and who helped put Flores in handcuffs stated that they saw a gun under his left leg when they first approached him. A pellet gun was found and collected as evidence at the scene.

QUEEN CREEK — Kevin Costner is well-known as a two-time Academy Award-winning actor and star of the hit television series “Yellowstone.”

He’s also a musician and on Sunday, Nov. 7 — the same day as Season 4 of “Yellowstone” premieres — Costner and his band, Modern West, are scheduled to perform a show at Schnepf Farms.

The show is part of the Kevin Costner & Modern West “Tales from Yellowstone 2021” tour, which promotes the band’s album by the same name. 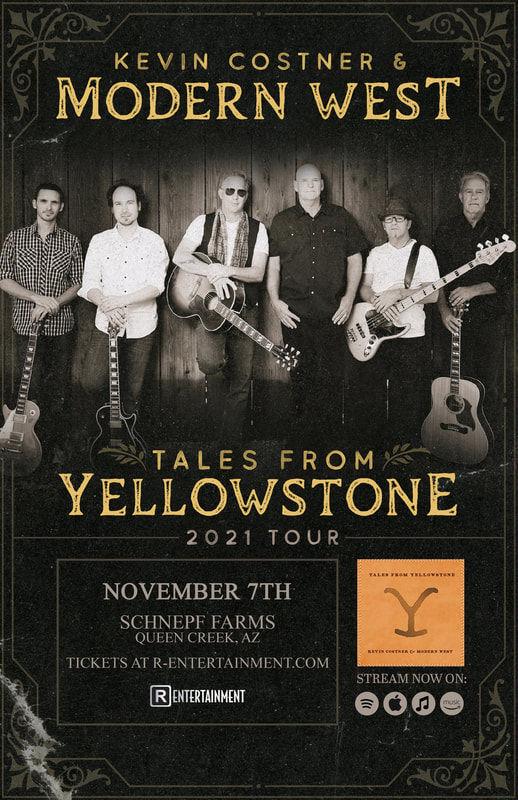 Costner and co-writers wrote the songs on the album. While some of the songs are personal and inspired by Costner’s own life, others are inspired by the character he plays in “Yellowstone.”

The song “Won’t Stop Loving You” is about the Yellowstone character, John Dutton, losing his wife, a press release from concert promoters said.

“It begins to sum up how he (John Dutton) feels,” Costner said in the press release. “This man is about the land. And when you share the land with your partner, every place you ever go, you see her on it. He’s a man going forward but you never forget the moment. It’s immovable. I don’t have to look any further than my own life to find what was the strength of it for me.”

As well as Costner as the frontman, singer and guitarist, Modern West also includes John Coinman, Blair Forward, Teddy Morgan, Park Chisolm and Larry Cobb, according to the group’s website.

Costner founded the band in 2007. Since it began, the group has released four studio albums and has had several tours, performing in spots around the globe sharing their music.

“Untold Truths,” the group’s first album, was released in 2008 and reached No. 61 on Billboard’s Top Country Albums and No. 35 on the Top Heartseekers chart.

Songs from “Tales from Yellowstone” were featured in the third season of the television show.

Tickets go on sale Friday at R-Entertainment.com. Ticket prices range from $50 for general admission to $300 for VIP seating.

The 75 acres proposed to be annexed is highlighted in pink.

CASA GRANDE — A 75-acre swath of land north of Val Vista Boulevard and east of Pinal Avenue may soon be annexed into the city of Casa Grande.

The Casa Grande City Council on Tuesday held a public hearing on the proposed annexation and heard details on the plan — the first step in moving forward.

Following Tuesday’s public hearing on the matter, annexation petition signatures may be collected. Further action on the annexation is expected to come before the council in October.

The annexation request was brought to the city by the landowner. Upon annexation, it would be zoned as Urban Ranch.

While the 75-acre parcel is close to the city’s Public Safety Facility, airport and a recreational vehicle park, it is not currently within city limits and not subject to city taxation.

In other business, the council held a public hearing and unanimously approved a zone change request, from Garden and Light Industrial to Planned Area Development, for about 56 acres at the southeast corner of Thornton and Peters roads to accommodate a project called Casa Grande Technology Hub.

The new zoning status allows flexibility in development and “will provide development regulations and design guidelines that facilitate an effective mix of manufacturing and industrial uses while also ensuring a quality design that can protect and enhance the integrity of the surrounding area,” according to city documents.

The council on Tuesday also approved a list of contracts and purchases including:

Charlie Luce and Dave Goss were appointed to the Airport Advisory Board and Terry Emig was reappointed.